This year is expected to be California’s worst wildfire season. That’s after 2020 was the largest wildfire season ever, and before that, it was 2018. Could an effective mitigation strategy be prescribed burns? That’s when firefighters set blazes in areas that can be contained. Photo by Shutterstock.

One of the most talked about solutions to the state’s wildfires is also one of the most dangerous for some Southern California neighborhoods: prescribed burns.

For years, the state has faced criticism for failing to prevent worsening fire conditions. This year is on track to be California’s worst wildfire season. That’s after 2020 was the largest wildfire season ever. And before that, it was 2018.

What is a prescribed burn?

They are fires set by firefighters in areas that can be contained. A small, controlled fire can prevent a bigger fire from finding fuel and spinning out of control. They’re widely viewed in California as a good idea, after a century of putting out every single fire in a rural area.

Where did this idea come from?

Setting the landscape ablaze on purpose is not a new concept. Across California there is evidence of indigenous burning practices. That evidence is harder to come by in Southern California, where actual records of cultural burning are sparse. That’s partly because indigenous tribes were forced to relocate after the Spanish arrived in California.

“We have this way of working with plants and animals and the land for its benefit. And if we can work together with the fire agencies because they have really good techniques and technologies and equipment and manpower … we [can] just kind of get this thing under control a lot easier, a lot faster,” he says.

Bugbee is also an ethnobotanist, so he knows a lot about plants and the purposes they served to native people living in Southern California. He says fire is in every part of local indigenous cultures, from safety to dance rituals to making basket weaving materials easier to use. The way he greets people literally translates as, “May the fire within you keep burning.”

But he says whatever burning does happen here would be much less frequent than in Northern California.

“Our forests down here, I think of our forests as the chaparral. It's not just not trees, it's just real thick, woody bushes. … Every once in a while, that has to be burnt a little bit, but really long intervals between it,” he says.

Why are prescribed burns rarer in Southern California?

“This is an ecosystem that's really adapted to infrequent fire. So it is fire adapted,” says fire ecologist Marti Witter, who works in the Santa Monica Mountains. “But probably the natural return interval in this area would have been between 70 and 100 years, because this is one of the areas with the lowest amount of lightning ignitions in the country overall.” 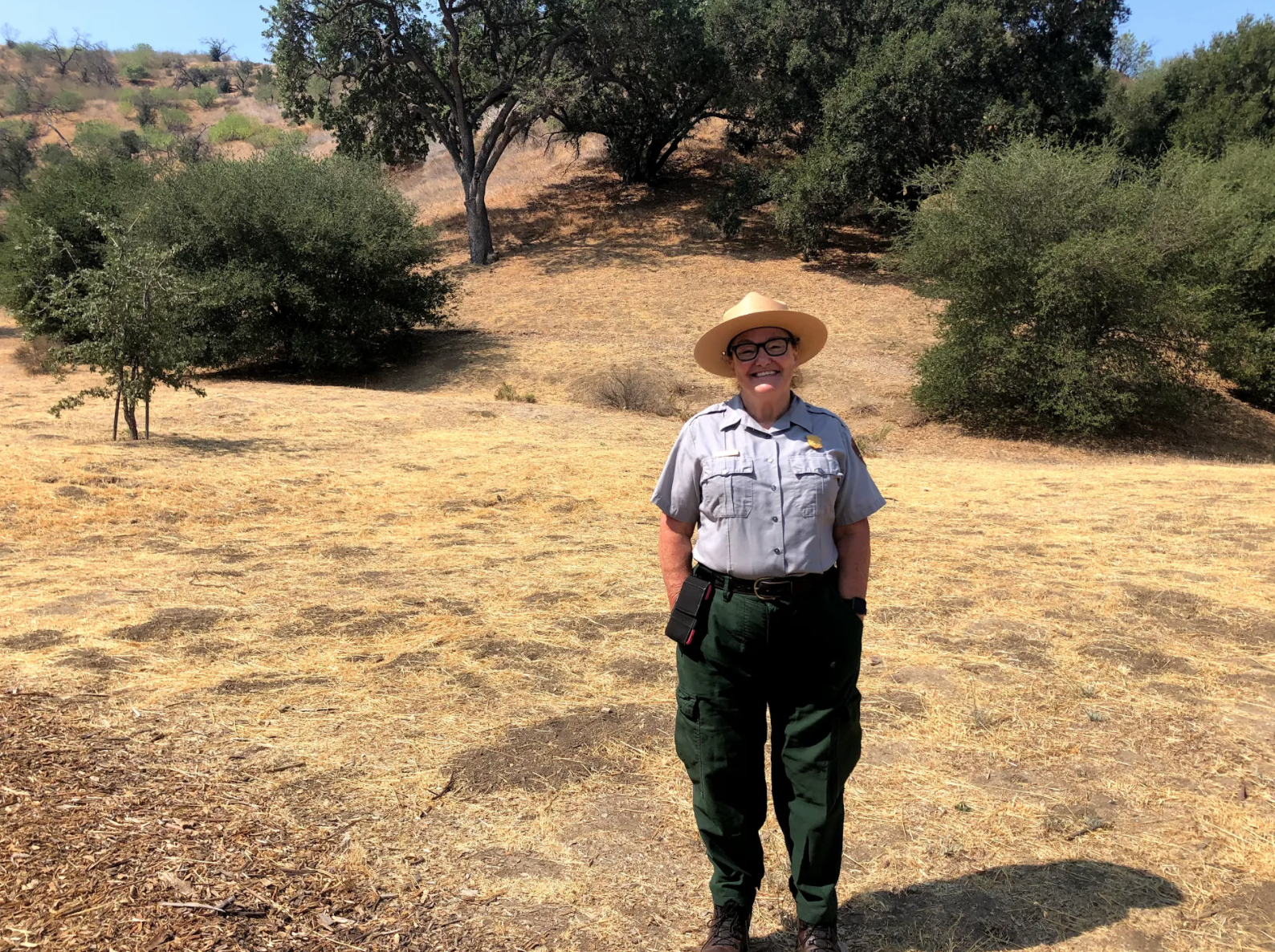 The hillside behind Fire Ecologist Marti Witter has burned twice in the past two decades. Photo by Caleigh Wells.

“We've had some significant challenges. This year, this prescribed burn season … which is typically January through May, because of how dry things have been, we really had to slow down in order to manage the risk of any kind of escape,” he says.

Fire agencies have to choose days when the plants aren’t too dry and the wind isn’t too strong so they can maintain control of a prescribed burn. As the climate warms and the drought worsens, that window of opportunity has gotten smaller. That’s left some local residents skeptical about whether prescribed burns work in Southern California at all.

Goat farmer Gloria Putnam and her partner live on 70 acres on the northern edge of the Angeles National Forest. She lives in the scar of the Bobcat Fire, which burned last summer. 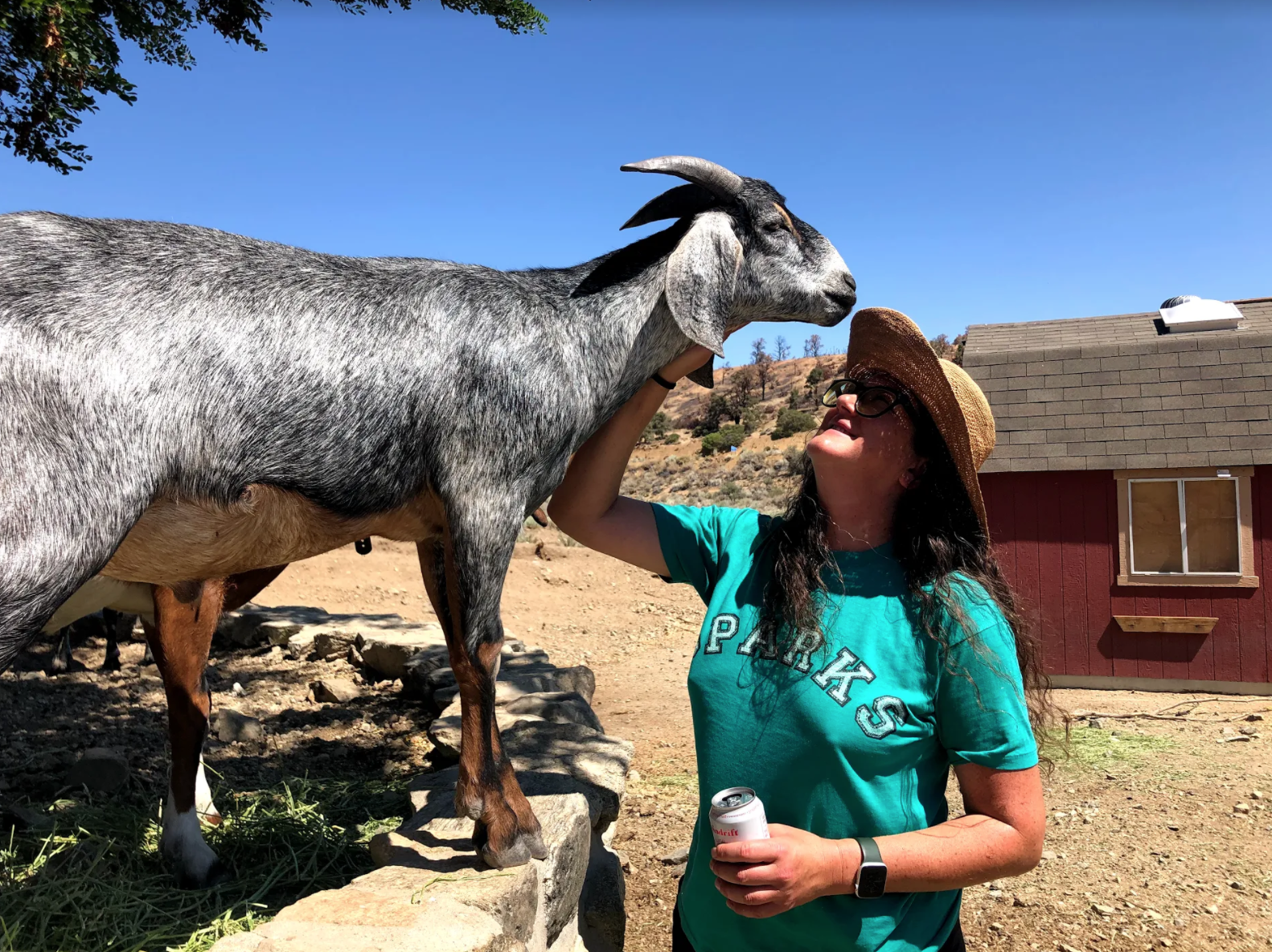 Gloria Putnam says her goat herd tripled after the fire, because many of the goats were pregnant when they evacuated. Photo by Caleigh Wells

“Well, [prescribed burns] don't make sense in Southern California. So it's not really a question for me,” she says. “So in chaparral, there's only one kind of fire, it's landscape replacing, it burns intensely, it burns everything. There's no such thing as a controlled burn in a chaparral when there's fire, it's complete. And that's just the nature of this ecosystem.”

Firefighters saved her home and barn, but a lot of her land is now a moonscape of barren hills dotted with black, dead tree trunks.

She says it took a couple months for her losses to sink in. With much of the foraging land gone, they started feeding the goats hay. That cost them an extra $4,000 per month. They took donations and ran up their credit cards to keep their goats fed. But she said the most emotional part was realizing what they’ll never get back.

“Studying about how land in an arid environment like this recovers, I learned … there won't be a forest here in my lifetime. I won't see that recovery,” she says. “Thinking about the loss of all that forage, it was like someone died.”

Putnam says some of those trees were more than 100 years old. She can’t find evidence of fires burning on most of her property since records began in the 19th century, so she doesn’t like the idea of introducing prescribed fire onto her property. 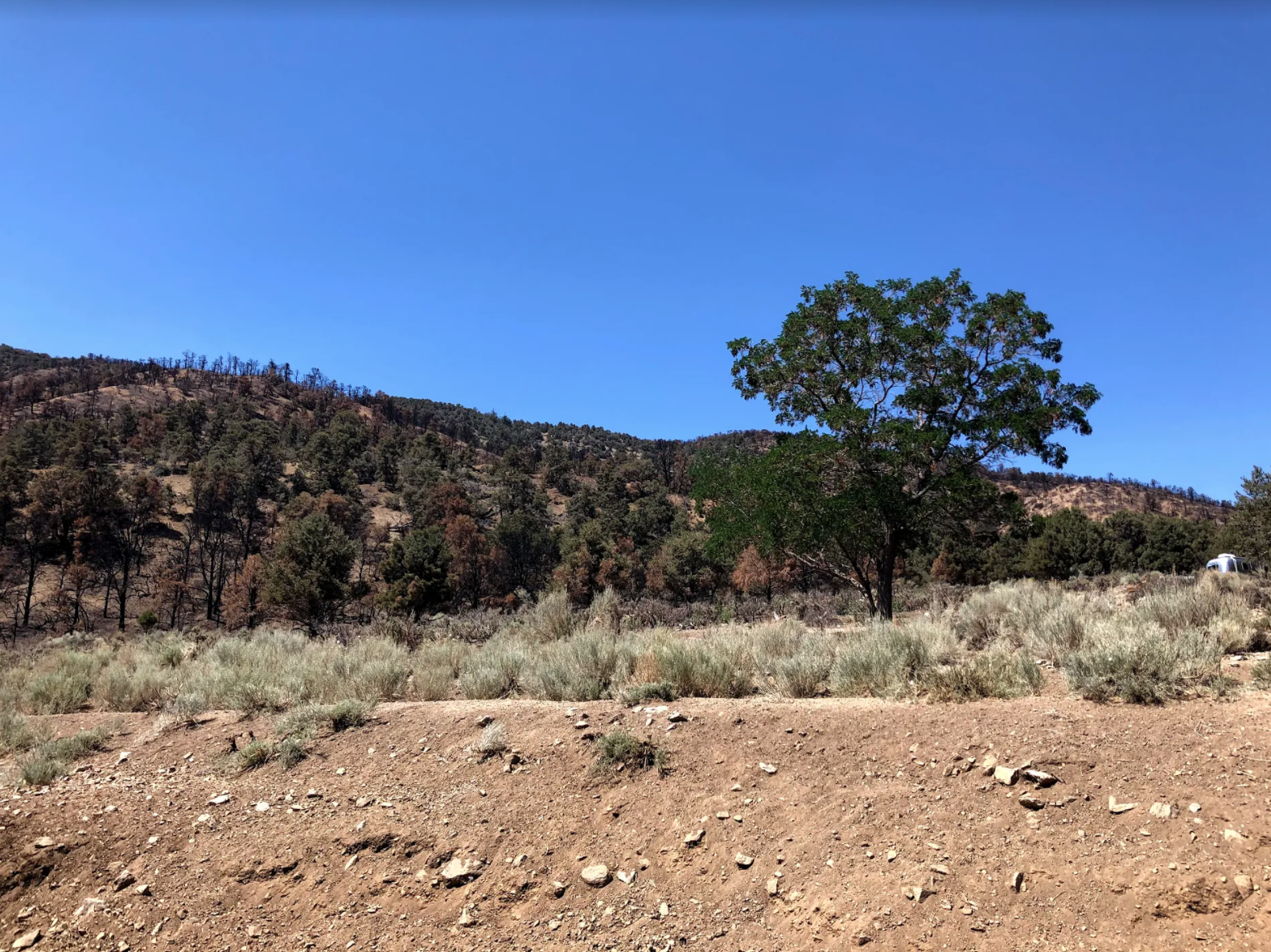 The chaparral on Putnam’s property (front) bounces back within a couple years after fire. The Pinyon Pines (back) can live to be hundreds of years old. Photo by Caleigh Wells.

What happens if the landscape burns too often?

Frequently when a wildfire clears the landscape of vegetation, it’s a race to see which plants will sprout first. And frequently, it’s the non-native plants that win.

Witter points at the vegetation in a Calabasas park, a few minutes from where she lives. The hillside behind her burned in 2003, and again in 2016. She says the last drought was so severe, many of the native trees that should have started to grow back by now don’t have the water they need to survive.

“What we're looking at here is the combination of two fires and an extreme long term drought. So it's just become worse,” she says.

She says today, burn scars in grasslands can become flammable again in as little as two to four years. So introducing prescribed burns to this landscape won’t make it any less flammable.

“It's an irreconcilable problem. If you eliminate the fuel load in chaparral, you've eliminated the habitat. If it does burn too frequently, then you in fact begin to lose those native shrub species that are the glue that holds the community together.”

Frequently, non-native species that grow in their place also happen to be more flammable, like the golden rolling grass hills that California is known for. Witter says even though there is evidence of indigenous burning practices, the landscape is already so different than it was hundreds of years ago. 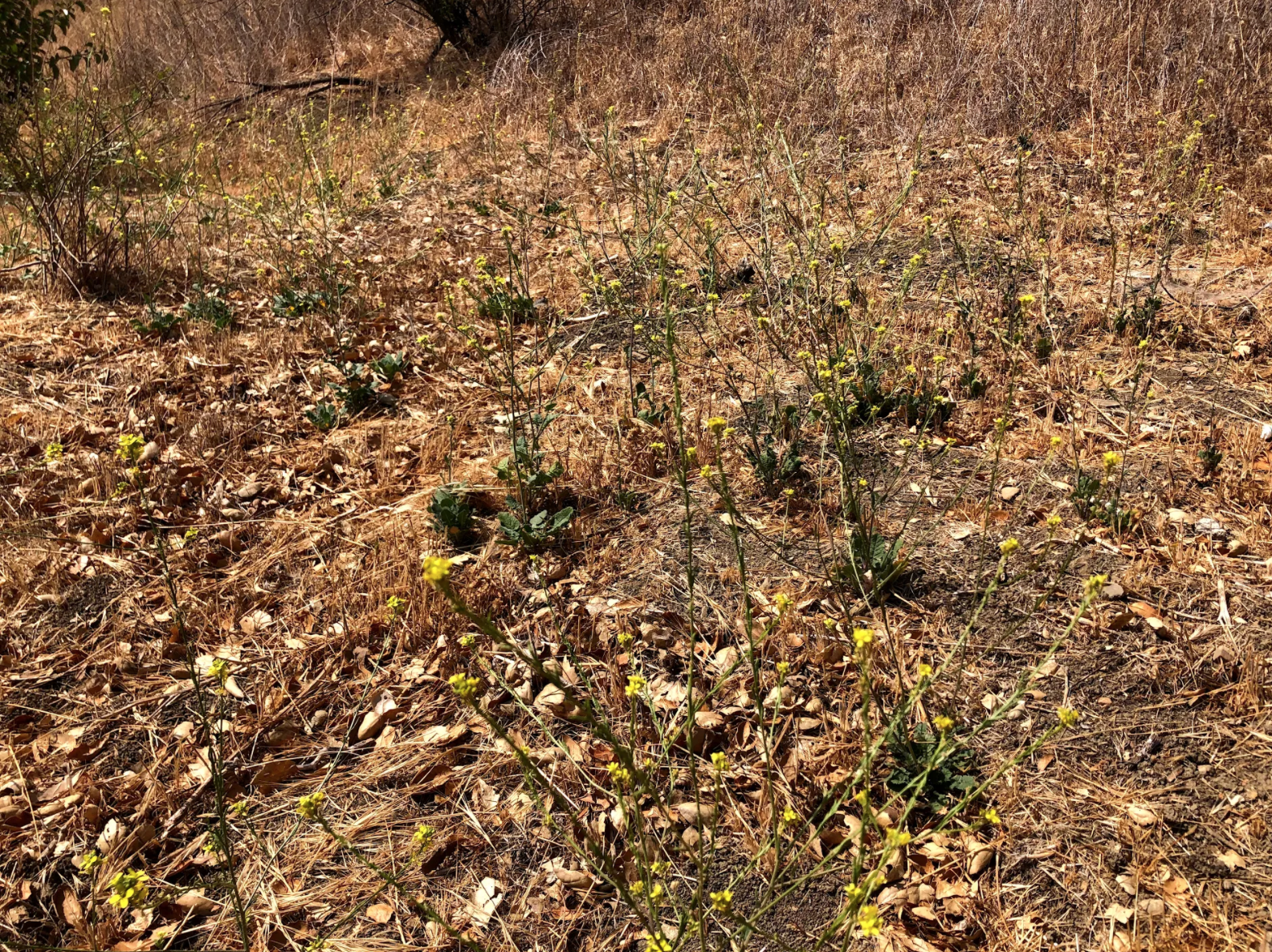 The yellow mustard flower is one of the first plants to grow after a wildfire. It’s an invasive, dangerous fuel for wildfire. Photo by Caleigh Wells.

Putnam does not want to introduce more fire on her property, but she knows it’s an inevitable part of life in the Angeles National Forest. She says since returning home, she has come to terms with the new landscape she lives in.

“It's true that the pinyon pines are gone for a long time. … I'm sad that they're gone. But there is also a whole new thing that's going to happen on this land that hasn't happened in hundreds of years. That's incredible in terms of biodiversity, and totally different than what I've seen. So now I kind of feel more like, what an incredible opportunity to be here now to get to see that.”