Dr. Lester Powell said he woke up on Nov. 7 to his son screaming and dancing in response to the news that the presidential race in Pennsylvania was called for Joe Biden. Photo by Caleigh Wells.

Los Angeles erupted when news broke that the presidential race had been called for Joe Biden.

Fireworks went off in Echo Park. Impromptu sing-alongs popped up on sidewalks, champagne pours included. Whole street corners in Silver Lake and Venice gave way to dance parties. A rainbow even made an appearance.

Several demonstrations that had been organized by Black Lives Matter LA, community groups and labor unions as “protect the vote” events on Saturday quickly became a celebratory march from Pershing Square to Grand Park near LA City Hall.

Crowd has likely crested a thousand, and that doesn’t include the constant stream of car horns honking in solidarity. Next up, we’re marching to Grand Park. pic.twitter.com/GaTNN1OzG0

Trump supporters held car caravans and smaller rallies too, with many of the president’s supporters echoing his lie that the election was stolen.

That wasn’t weighing on Cherie Wright. In downtown LA on Saturday, Wright said the overwhelming feeling was relief. “Like 20 monkeys had gotten off my back. When I found out, I felt the weight being lifted off of my body.”

Harris, one of California’s U.S. senators, was born in Oakland and now lives in Brentwood in West Los Angeles. As the daughter of immigrants from India and Jamaica, she will be the first woman, the first Black person, and the first South Asian American to hold the office.

Trump is deeply unpopular in California, but particularly in LA. Biden won 2.6 million votes —71% of the ballots— while Trump earned just 26% percent, according to the returns so far from the Los Angeles County Registrar-Recorder. Statewide, Biden won nearly 9 million votes — 4 million more than Trump. California is one big reason Biden won the popular vote by such a wide margin. 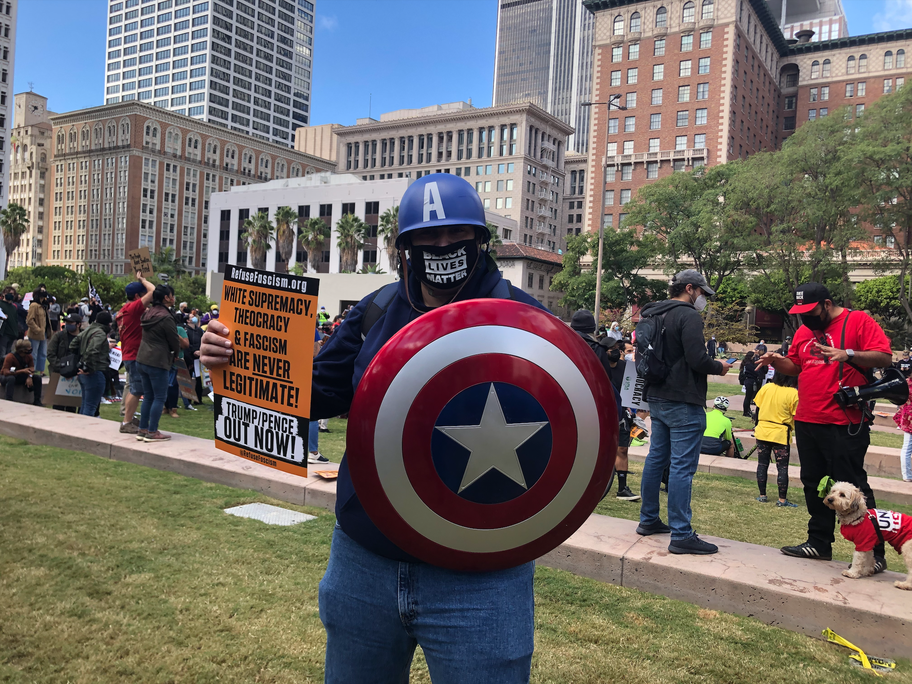 Rob Peig celebrated by dressing as Captain America. He said he is an iconic anti-fascist symbol and represents a rejection of everything Trump is. Photo by Caleigh Wells.

But anti-Trump sentiment here is not always the same as passion for Biden.

“We’re not necessarily out here celebrating Biden as our president but celebrating that the people won — that people mobilized across the country in key states to get Black and brown folks out to vote,” said Carla De Paz, who came downtown from Boyle Heights to march.

She told KCRW she plans to keep fighting. “We’re fired up and ready to continue organizing and mobilizing to make sure our communities get the things they need from the new administration.” 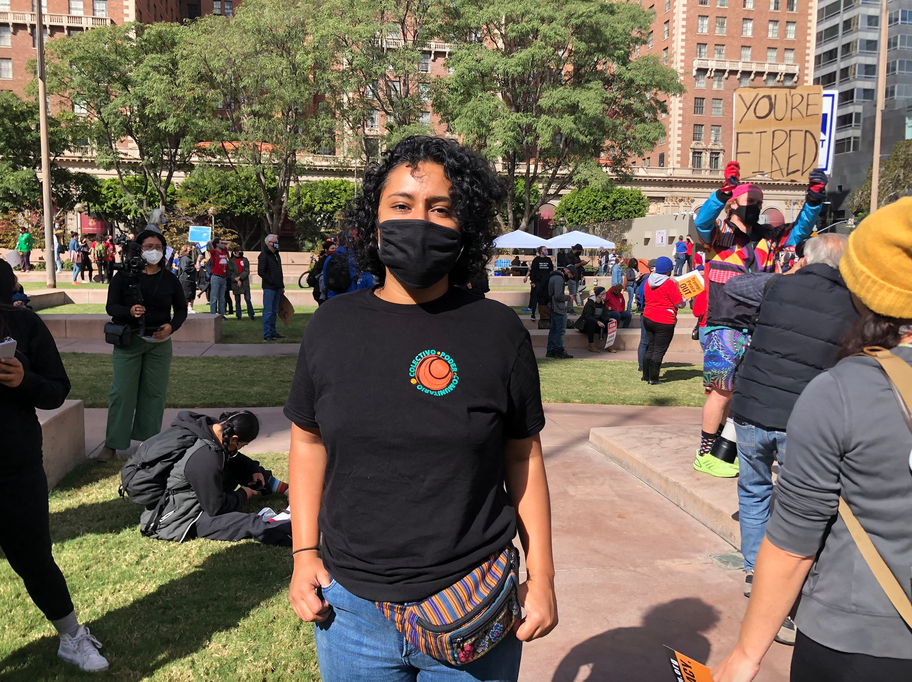 Carla De Paz said she was relieved and fired up about the end of  Trump’s presidency. But she said she’ll continue fighting for her community. Photo by Caleigh Wells.

If you compare crowd size, as the president likes to do, Trump supporters were far outnumbered at LA gatherings.

Car caravans with Trump flags drove through West LA on Saturday and Pasadena on Sunday.

The rally at Beverly Gardens Park in Beverly HIlls drew a couple hundred people on Sunday. But the mood was more aggrieved than grieving. Trump supporters told KCRW that as long as the president hasn’t conceded, neither would they. 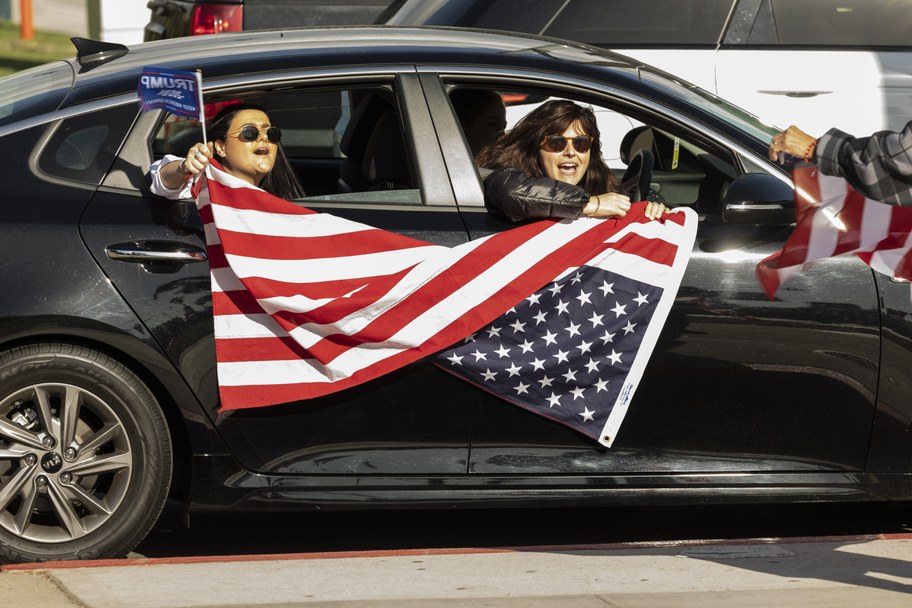 Trump supporters drive through the “Stop the Steal” rally in Beverly Hills on Nov. 8. Photo by Ted Soqui for KCRW. 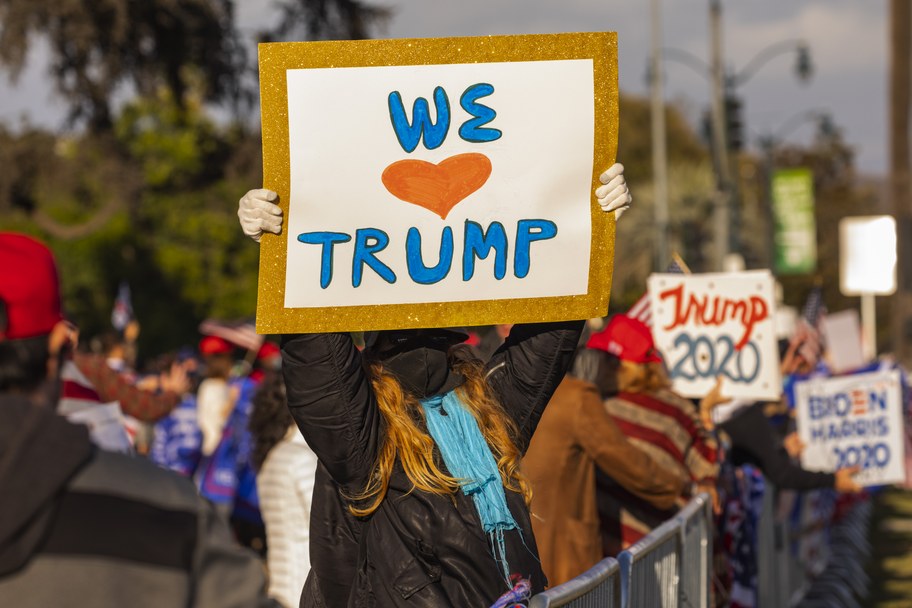 A woman holds a “We heart Trump” sign at the “Stop the Steal” rally in Beverly Hills on Nov. 8. Photo by Ted Soqui for KCRW.

Preston Williams, an actor decked out in all red and a MAGA hat, was upset that Beverly Hills police officers wouldn’t let him carry his Trump flag on a pole. “A week ago, we could have had a flag pole and now we can’t have it. We haven’t created violence here, this is a peaceful protest,” he said.

Williams refused to accept the fact that Joe Biden is projected to win the Electoral College vote handily. “We’re not going to trust the mainstream media because they're corrupt, even Fox is corrupt.” 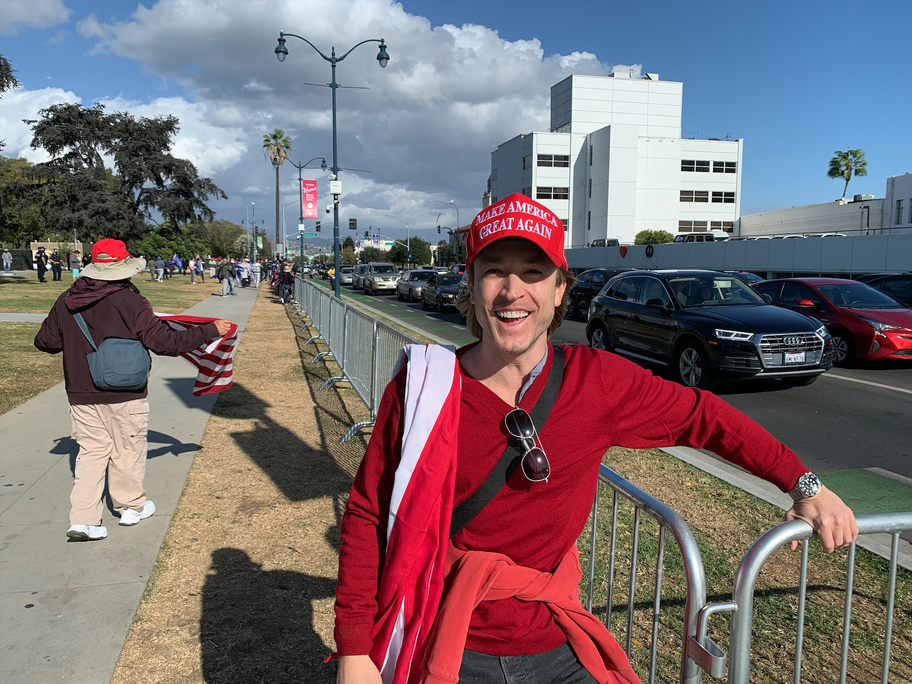 Actor Preston Williams refused to accept Joe Biden as the presumptive winner of the 2020 presidential race. Photo by Evan George.

While Williams was speaking, a car stopped at a red light blasting YG and Nipsey Hussle’s 2016 single “FDT (F— Donald Trump).” It was one of a handful of times that drivers on Santa Monica Blvd. would turn up the track and taunt the Beverly Hills protesters. The song became something of an anthem on the streets of LA this weekend.

Much of Beverly Hills was boarded up, especially Rodeo Drive. City Officials and shop owners had prepared for unruly protests and organized looting, which did not materialize. It made for a surreal Sunday scene with visitors trying to window shop through plywood. 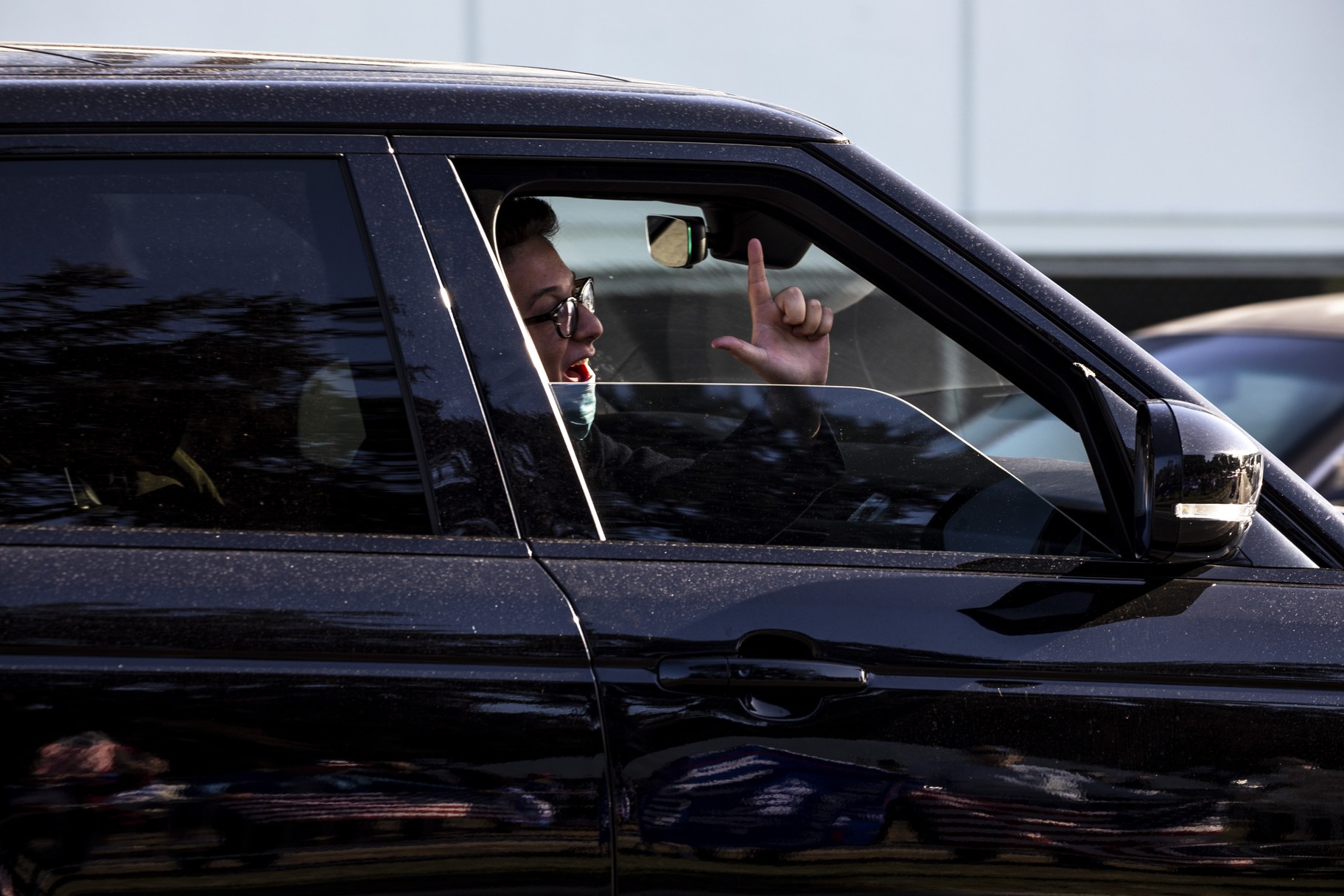 Driving by the "Stop the Steal" rally, Angelenos taunted the pro-Trump demonstrators by holding up the "L" sign for loser. Photo by Ted Soqui for KCRW.

giving the crowd the thumbs down, L’s for loser, and the middle finger.

Lionel Jackson of Pasadena explained why he came to Beverly HIlls. “We are out here for the simple fact that we support the president, but also we’re concerned about the process that took place in some of those key swing states.”

Jackson was referring to mail-in voting. There’s no evidence of any significant problems related to vote-by-mail ballots. Conspiracy theories surrounding voter fraud have been discredited.

The uptick in Biden votes over the week is partly a result of Republican-backed policies not to allow absentee ballots to be counted until Nov. 3 in some key states. But Jill Bodie doesn’t find that convincing. “I don’t like what I’ve seen and I went to bed and all of a sudden, the numbers switched.”

Bodie and others said they’ll support “whoever wins” — but only after there’s a recount in each battleground state.

END_OF_DOCUMENT_TOKEN_TO_BE_REPLACED
KCRW’s Season of Giving Back – We know there are so many worthy causes deserving of your support at this time of year but we hope KCRW is on your list.