A supporter of President Donald Trump confronts police as extremists demonstrate on the second floor of the U.S. Capitol near the entrance to the Senate after breaching security defenses, in Washington, U.S., January 6, 2021. Photo by Mike Theiler/Reuters.

Lawmakers from Southern California took to Twitter and to the phone lines to let their constituents know they were okay and to condemn Wednesday’s violent insurrection at the U.S. Capitol.

U.S. Capitol Police locked down all buildings within the complex as pro-Trump extremists breached the structure and clashed with police. Before the National Guard, Capitol Police, and other agencies were able to clear the complex, lawmakers were in lockdown and then were evacuated to a safe location.

Congressman Brad Sherman, who represents the 30th district, which covers the San Fernando Valley, spoke with KCRW from the Rayburn House Office Building right after the Capitol was cleared.

Sherman said that when he arrived to work in the “impenetrable complex with truly intense security and checkpoints,” he believed he was safe.

“I expected to have lots of noisy Trump demonstrators outside screaming, and perhaps on the Mall with Trump speaking to them. I expected to be inside going through a process…”

Sherman said he agreed with House leaders that “Come hell or high water we are going to proceed… I think C-Span will have a higher rating than it usually does.”

“We will build unity to this country but it will take a while,” he said.

Rep. Adam Schiff of Burbank was tapped for a key leadership role in today’s proceedings as Congress was supposed to certify the electoral college results. Schiff tweeted Wednesday afternoon that “a violent mob won’t stop us from upholding our constitutional duty to certify the election.” Schiff thanked Capitol Police for keeping him and his staff safe.

Democratic Congresswoman Norma Torres, whose district stretches from Pomona to Rialto, posted a photo of herself in a respirator mask as she called for the president to order his followers to vacate the building. There were multiple reports of tear gas used in the Capitol to help clear insurrectionists from the building.

Meanwhile, Representative Karen Bass of LA said she had been evacuated to a safe location. Speaking to KCAL-9, Bass said it was shocking that Trump would incite such violence. “This is the group that wanted to yell and scream about antifa and Black Lives Matter — and look at the reckless behavior that they are carrying out now. This is an attempted coup by the President of the United States.”

During the standoff, LA area congressman Jimmy Gomez said on Twitter he was stuck in the House gallery with 30 to 50 colleagues, gas mask in hand, as people tried to break into the chamber. 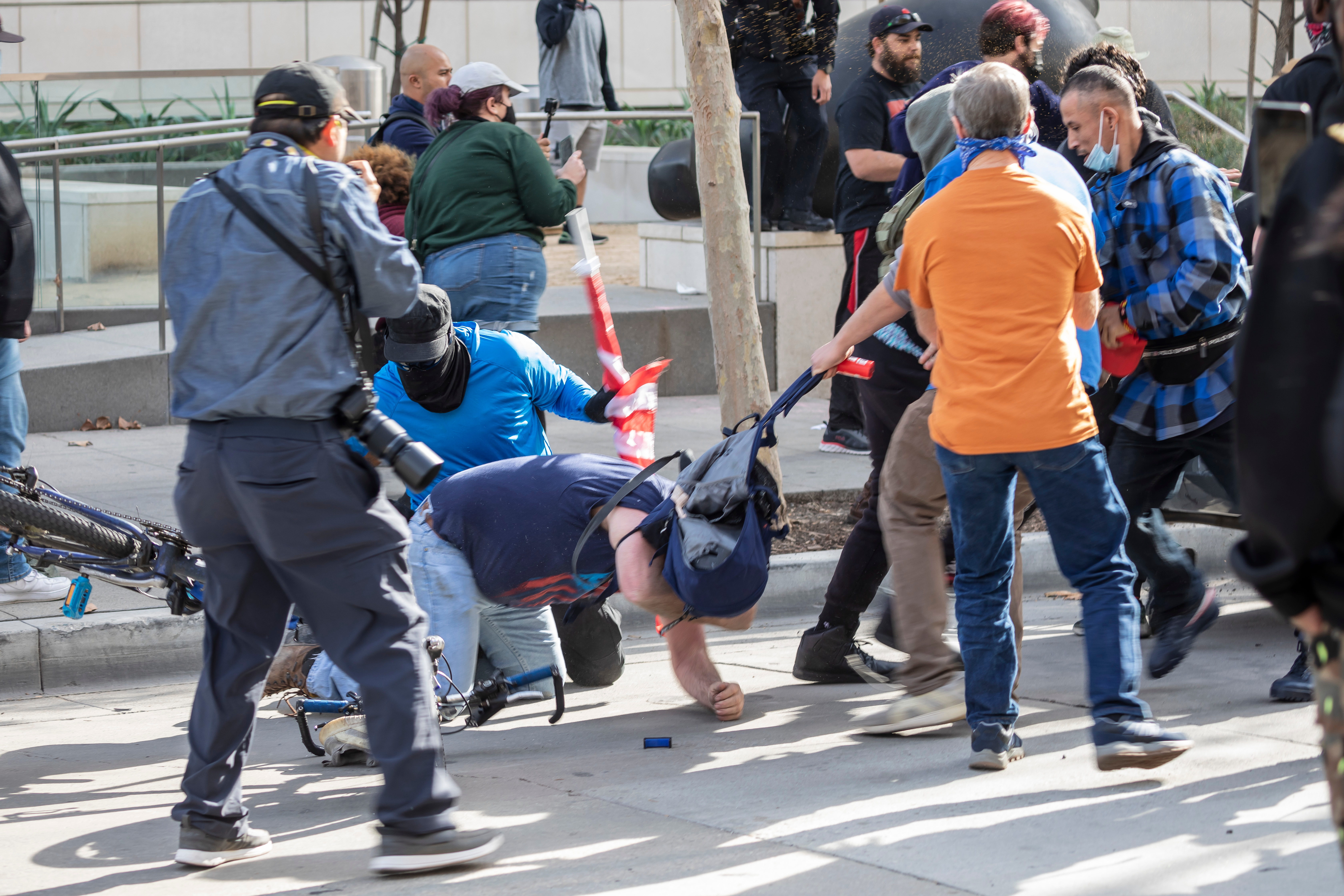 Trump supporters made their presence known across Southern California too.

A crowd of hundreds descended on Downtown LA this afternoon to support the president’s baseless claims of election fraud. The group of 200 or so clashed with LAPD as well as  counter-demonstrators. Several arrests were made.

In Orange County, a group of Trump supporters lined PCH in Huntington Beach waving both American flags and Trump flags. The gathering stayed peaceful and had mostly disbanded by the mid-afternoon.