Chickenjoy and Yum Burgers: Jollibee expands to West Covina and beyond The exterior of a Jollibee location in Southern California. Photo by Danielle Chiriguayo/KCRW.

Jollibee recently announced that West Covina will be the new home of its North American headquarters.

Previously housed in the City of Industry, the new office is the latest in Jollibee’s move to expand in North America. The company expects to triple its number of U.S. locations by 2023, according to Maribeth De La Cruz, Jollibee North American president.

“Los Angeles is a key hub for us because the majority of our operations are here in L.A., and California happens to be the state with the highest number of Filipinos,”  De La Cruz said. “We are looking into reaching out to most of them so we can bring them the taste of home.”

Nearly 500,000 Filipinos live in L.A. alone, according to the Pew Research Center in 2015. Some consider Jollibee to be the “McDonalds of the Philippines.” It has about 1160 locations across the Southeast Asian country.

Many Southern Californians crave that taste of home, including Luz Tabaniag, who moved to L.A. more than 20 years ago. “Jollibee is common in the Philippines… Every time I miss Filipino food, and I don’t want to cook, I have to pass by Jollibee,” she said. 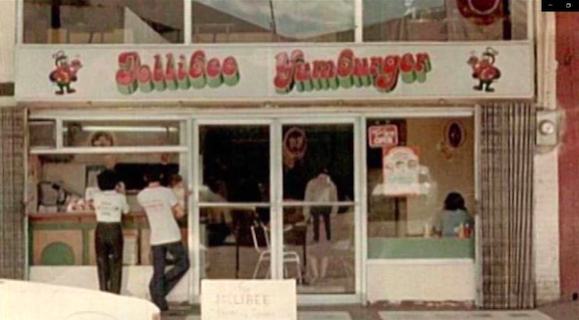 The first iteration of the company, an ice cream parlor, was founded by Tony Tan Caktiong in 1975 on the island of Cubao in the Philippines. Business was good, but Caktiong wanted more.

He pivoted into the savory food market, and by 1987, Jollibee had entered Forbes’ ranking of top 100 Filipino companies. Today, Jollibee is part of  Forbes’ “Asia’s Top Best Over a Billion” list. It brought in a revenue of $3.1 billion in 2018.

A tale of two palates 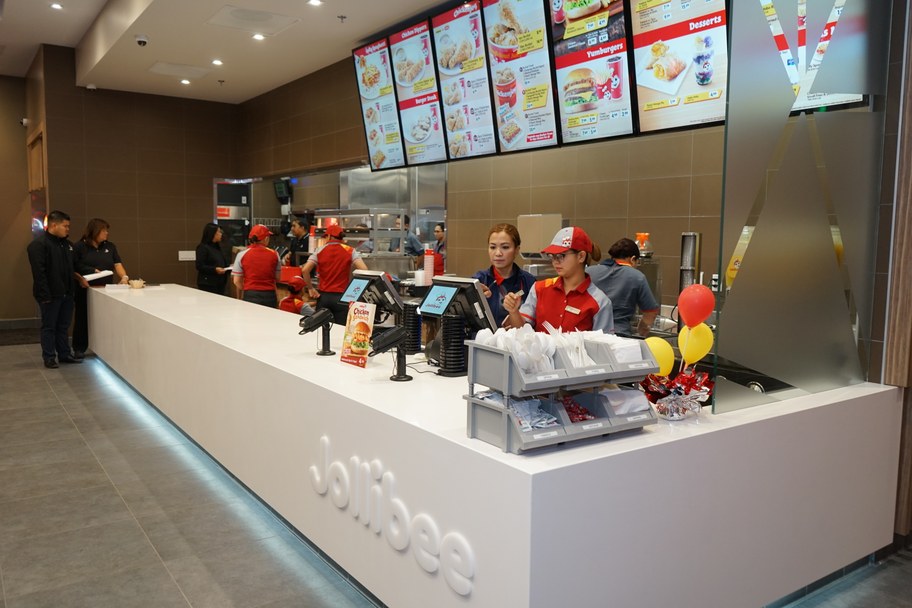 The interior of a new Jollibee location in Artesia, California. Photo courtesy of Jollibee Food Corporations.

So what’s on the menu? Chickenjoy is fried chicken often served with rice and gravy. Another favorite is Jolly Spaghetti, a sweet twist on the pasta dish that includes sliced hot dogs and ham. Other items include Peach Mango Pie and the familiar American mainstay...hamburgers, which the chain calls YumBurgers.

While some people love the food, others find it strange.

Matthew Boggs, a Southern California native and a self-described adventurous eater, remembers a chance encounter with a Jollibee near Historic Filipinotown almost a decade ago: “I pulled out the Yum Burger, took a bite out of it… It was not what I expected. It was definitely not something that was ‘ooh yum’ to me.It didn’t taste like a burger, right? To me, I described it as a mush burger because it tasted like that grade school mush burger that they would serve you.”

One Yelp user even referred to Jollibee’s food as “absolutely disgusting processed garbage” and “doesn’t understand why” it exists. 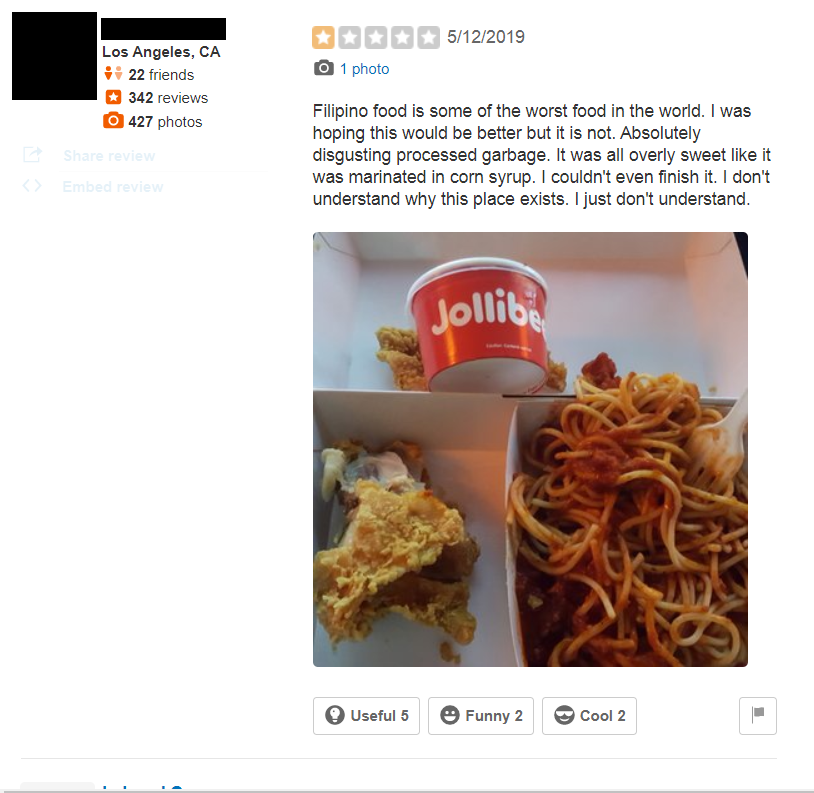 A recent one star Yelp review for a Southern California Jollibee.

Jollibee aims to appeal to as many communities as possible and, according to De la Cruz, “spread the joy of eating to everyone.”

“I think because of new trends of people in the United States welcoming new flavors... our kind of taste will appeal to everyone, regardless of demographic or ethnic background,” De la Cruz says.

Love it or hate it, the company has steadily grown over the last four decades, with more than 1400 locations around the world, including 12 in Southern California.  Jollibee also wants to be one of the top five restaurant companies in the world.


Correction: An earlier version of this story mischaracterized the exact ingredients of Jolly Spaghetti.