Despite evacuation orders, some Malibu residents 'stay and defend' homes Dark smoke fills the sky as the Woolsey Fire bears down on Malibu. Justine Petretti

The Woolsey Fire destroyed 670 structures in Malibu, including more than 400 single family homes. That makes it the most destructive fire in the history of that beachside community. But residents there say many homes stand today, not because of the professional firefighters, but because of private citizens who defied mandatory evacuation orders to protect their neighborhoods.

Armando Petretti was among those who stayed to defend his home from the fire on November 9th, the day the Woolsey hit Malibu. On cell phone video shot by his neighbor, you can see Petretti, under a sky made pitch black by thick smoke. He wears  his fire jacket, gloves and helmet and looks intently at the flames as they bear down on his neighbor’s home from almost every direction. There’s a long line of fire hose laid out on the driveway.

“All of a sudden the house next door caught on fire, said Petretti, “And that was I think the scariest moment, because I had a structure that was completely on fire and it was very hot - very, very hot.”

Despite his fear, Petretti said he stayed calm.

“I was always carefully looking at my exit to make sure that it was always clear and open for me,” said Petretti. “And I was really focused on trying to catch the fire when it started on trees, palm trees and vegetation, so they wouldn't spread. And it worked out really well for me because I had plenty of water pressure.” 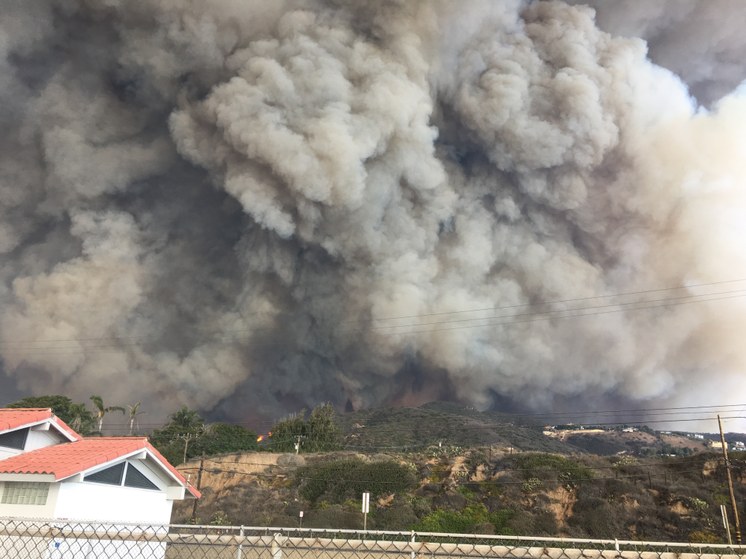 A thick plume of smoke from the Woolsey Fire engulfs Malibu. Photo courtesy of Justine Petretti

Petretti’s wife and kids had retreated to the Zuma beach parking lot with dozens of others. But Petretti and about 10 other guys who live in the Malibu West neighborhood stayed back. They were prepared. Calling themselves a volunteer brigade, they each have their own gear, have trained with a retired fire chief and are arson watch volunteers with the Los Angeles County Sheriff’s Department.

Justine Petretti, Armando’s wife, says she is certain their house is still standing because of Armando and his neighbors’ efforts.

“If he wasn't here with those hoses, there a lot of these houses on this street would not be standing,” she said.

In spite of all the warnings from officials, the media coverage of a raging, fast-moving fire, and past experiences of wildfires burning through Malibu, residents like Petretti felt they could handle the danger. You could almost call his “stay and defend” impulse part of the culture of Malibu. This attitude is something officials know they’ll have to contend with in the future.

When asked whether exceptions should be made when a mandatory evacuation order is given, the answer from both the LA and Ventura County Fire Departments was an unequivocal no. For those agencies, the number one priority is the “preservation of life.” Captain Tony Imbrenda with LA County Fire posed a hypothetical.

“You know, some of your neighbors down the street that those fire companies were there to save, lose their lives because now they're (the crews) going to pick up and go over and try to extract people that are now in a situation that they can't get themselves out of.”

Officials point to that fact that three people lost their lives in the Woolsey Fire. Even Malibu’s Mayor Pro Tem, Jefferson “Zuma Jay” Wagner, was hospitalized for several days because he stayed to defend his home and got severe smoke inhalation.

Despite that, Justine Petretti cites Malibu West, Paradise Grove and another neighborhood called Point Dume, where a group of two dozen young men called the “Point Dume Bomberos” are credited with saving homes.

“Those guys, they’re surf buddies with our son” said Petretti. “And maybe they lack the training and maybe they're not as experienced as our Malibu West brigade, but again these are kids who grew up here who know the landscape and again had the ocean to jump into.”

Like Petretti and his volunteer brigade, the guys in Point Dume ignored evacuation orders in the days after the fire hit to stamp out hot spots. Since there were roadblocks set up on the PCH, they had supplies brought in to Malibu by boat, including essentials like water, food, even gasoline for generators like the one the Petrettis used to power their home that week.

Many in this tight knit community are calling the people who stayed to defend homes heroes - Private citizens who did what needed to be done to save homes.  Some residents are even critical of the fire crews, saying they saw them sitting in idling trucks, not doing anything to save the structures around them. However, Captain Imbrenda with LA County Fire reminds the public that firefighters were dealing with a ferocious fire that decimated 150 square miles of land and forced the evacuation of a quarter of a million people in a short period of time.

“You know, we're talking about a fire that's 14 miles wide. There's no fire department anywhere in the world that can stick a fire engine in every driveway,” said Imbrenda. “So what we're trying to do is take the resources that we have available to us and we are looking at the area under threat. Every resource that we had was actively engaged in a firefight that day.”

Rick Mullen, the current Mayor of Malibu, is a full time L.A. County fire captain who was on the front lines during the Woolsey Fire. He says a mandatory evacuation order is just that - mandatory.

“Not everyone really appreciates the severity of that risk. And this fire illuminated to people just how severe that risk can be -  a couple of people paid for it,” said Mullen.

But Mullen also knows his neighbors and knows that some people just won’t leave. He acknowledges that some residents who stayed during the Woolsey Fire did effectively save their homes.

“The reality is this is America,” said Mullen. “We got a lot of free thinking people who are going to make their own decisions in that type of environment and some will choose to stay the ones who will succeed are the ones who will do their homework understand the risks, understand fire behavior prepare for the Murphy factor if that water goes out have the appropriate protective equipment and has a plan.”

Armando Petretti says the new era of faster, more frequent fires in California should push officials to recognize there are able bodied residents who can help them during major fire events.

“I think that the way that we approach situations like this have to change because I think that we are going to get fires that are bigger and more powerful than ever,” says Petretti. “And the fire department can only do so much.  I think that the younger people and the people who have the kind of personality should be trained and fight the fire.”