Día de Los Muertos 2020: The impact of COVID, plus virtual and in-person events around LA Día de los Muertos is typically a community-centered holiday, when loved ones gather to share stories, food, and music. It’s all in an effort to honor the dead.

With the COVID-19 pandemic, Día de los Muertos is also a time to remember the hundreds of thousands of people who have died from the coronavirus.

That includes 47-year-old Javier Covarrubias. For 23 years, Covarrubias worked as a meat cutter at Gelson’s in Pacific Palisades. Through his job, he got involved with UFCW Local 770, a labor union that represents more than 30,000 grocery, health, retail and packing workers across California. It was in his 15 years working as a union shop steward that he met Ron Solano, a union representative with Local 770. 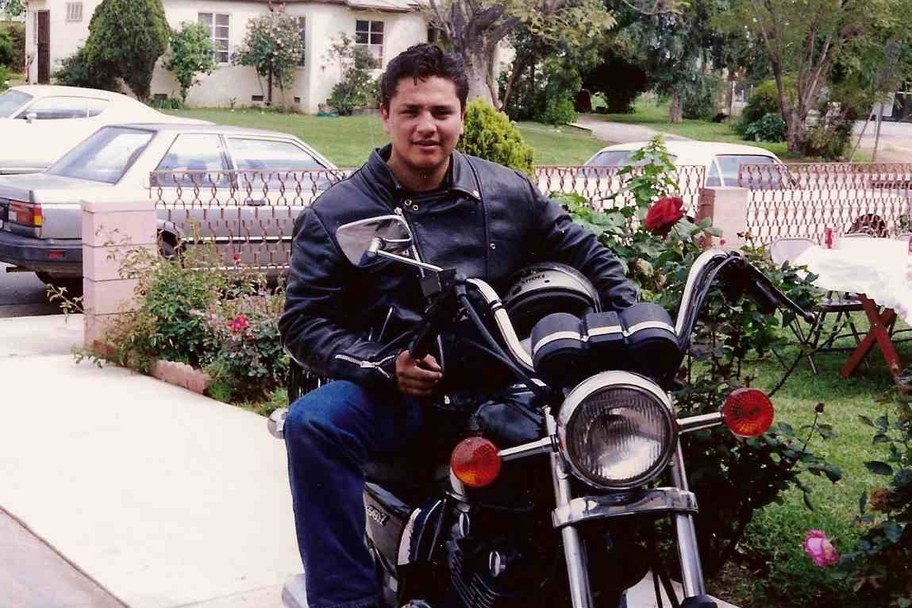 Javier Covarrubias was an avid motorcycle rider throughout his life. Photo courtesy of UFCW Local 770

In his spare time, Covarrubias loved riding Harley motorcycles, getting involved with Local 770, and spending time with his wife and three children.

In March, word spread around Local 770 that a worker at the Pacific Palisades Gelson’s had caught COVID-19. Solano called Covarrubias to find out more.

“I was outside with my kids, and my wife and I had him on speakerphone, talking to him. And I just remember him telling me, ‘It's me,’” Solano says. “I just literally broke down because I didn't expect it ... and out of all people, I wouldn't think he would be the one to have it. I couldn't believe him. I thought he was joking with me.”

In late March, as COVID-19 began to spread across LA County, Covarrubias caught the virus.

“He got really sick and got admitted [to the hospital], and I lost touch with him for about five to six weeks,” Solano says. “Then all of a sudden, I got a message from him on Facebook like ‘I’m out. I'm surviving, I'm just recovering, I have to learn how to walk and talk, but I can type.’”

Covarrubias died from complications of the virus a week after his release, according to Solano.

It’s unclear where Covarrubias might have gotten sick, but friends and family suspect it was through an unmasked customer at Gelson’s.

Today, he is one of the six Local 770 workers memorialized at the UFCW Local 770 Día de Los Muertos altar in Koreatown. 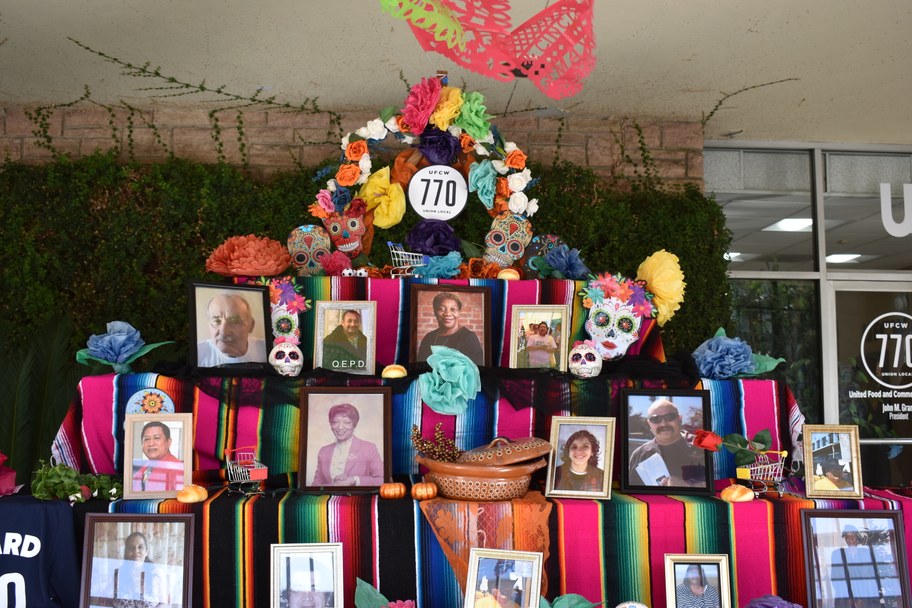 UFCW Local 770’s altar serves as a memorial for its members who died of COVID-19. Photo courtesy of UFCW Local 770

The altar, decorated with sugar skulls, marigolds and other flowers, is set up to honor those who have died this year due to COVID-19. Photos show workers, and community and family members.

The altar features art made out of more than 1,300 masks, which helps represent deceased essential workers like Covarrubia.

“We represent workers that are feeding families, that are taking care of families. What the altar really means is to show the people that have sacrificed their life during this time. It’s now a loss that we have because they're no longer with us,” Solano says.

This year, SHG was forced to push many of its events online, due to COVID-19 risks. According to Executive Director Betty Avila, celebrating Día de los Muertos this year was especially important.

“It went back to this question of how can we create an experience that is beautiful, that is inspiring, that helps people to just process what we're experiencing?,” Avila says. “This is something we're still experiencing,  we’re not out of it yet. That need to just share and celebrate and process and to grieve — Day of the Dead is a vehicle for that.” 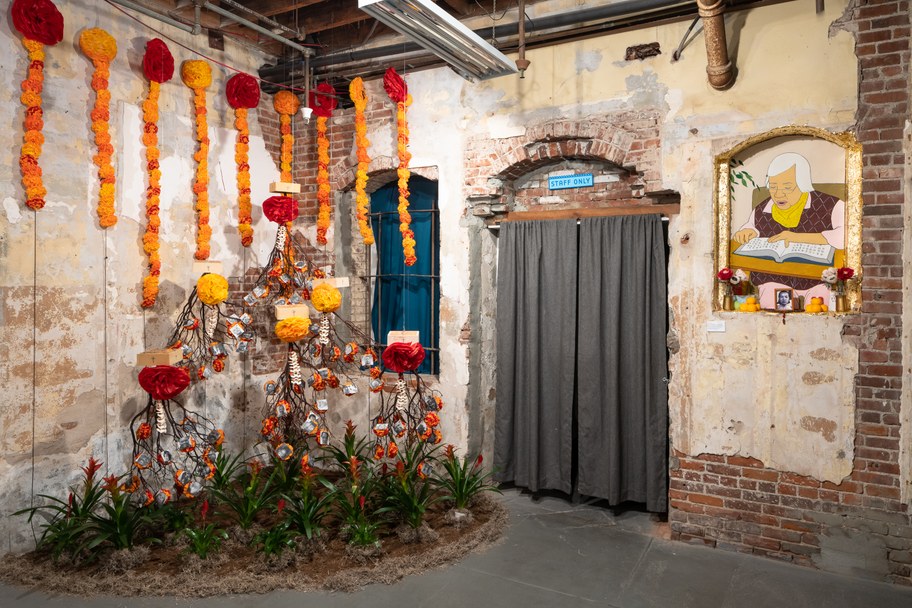 Avila says the number of COVID-19 deaths among Black and Brown people adds to the meaning of this year’s holiday.

For nearly half a century, SHG has celebrated Día de Los Muertos alongside community members, artists, and local musicians. That includes building and displaying traditional altars at Grand Park in downtown LA.

This year, SHG set up 11 altars at Grand Park — less than half of its typical amount of altars — and will host a virtual car procession through East LA. 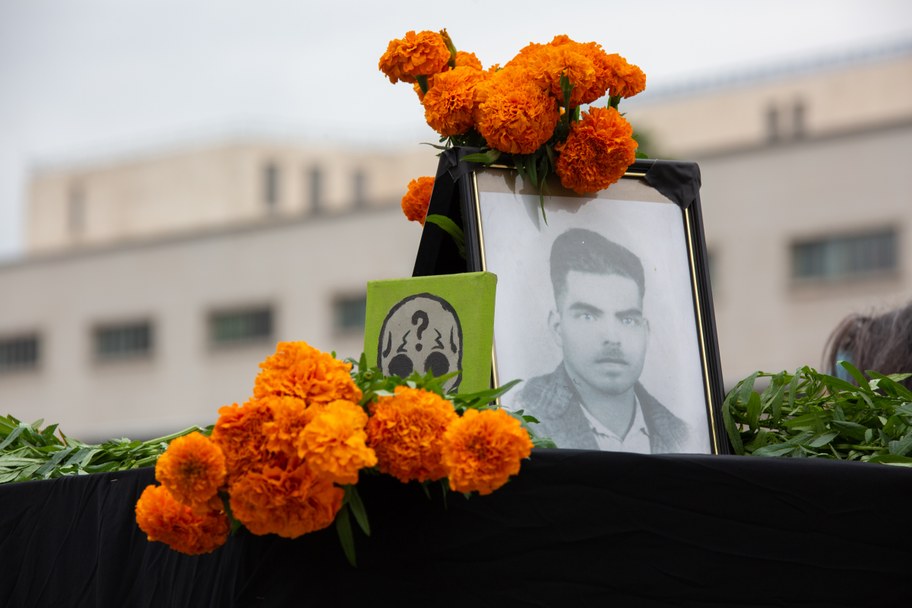 Self Help Graphics & Art has set up 11 altars this year at Grand Park in Downtown LA. Photo by Rafael Cardenas

Solano says that Covarrubias serves as a cautionary tale, and can help raise awareness around staying safe during the pandemic.

The Boyle Heights-based art center is hosting a car procession to honor loved ones who have passed. Attendees are encouraged to decorate their cars like mobile altars.

In its first virtual celebration, Self Help Graphics & Art will feature local community members, musicians such as Katzù Oso, and community-driven art.

View 11 altars on display outdoors at Grand Park in downtown LA. Built in partnership between artists from Self Help Graphics & Art and The Music Center, the event features public art installations and interactive audio guides.

Social distancing is required and attendees must wear a mask at all times.

Museum of Latin American Art’s Day of the Dead: A Long Journey

This is a virtual, immersive art exhibit that helps reflect on the cycle of life — by examining the past, present and future of Latinx cultures.

Hollywood Forever is known for its lively costume-filled Día de los Muertos celebration. But the event is cancelled this year. Instead, the organization is hosting a live-streamed concert that will feature bands such as Los Lobos and Tropa Magica.