Fast food workers across the state walked off the job today, demanding improved working conditions, better pay, and increased health and safety standards in the workplace. Joined by state lawmakers and local community organizers, three protests took place in LA. That includes a demonstration in Monterey Park, where dozens of workers and advocates  decried treatment from unruly and disruptive patrons, untenable amounts of work stemming from low staffing numbers, a lack of PPE during the pandemic, and more.

Angélica Hernández has worked at the Monterey Park McDonald’s for the last 16 years, and she tells KCRW she’s on strike because she’s had enough. She recounts the experience of doing the work of two to three people, and receiving only a 10 cent increase in pay.

“It’s important for me to fight and use my voice to be heard, so we’re not being trampled on and humiliated when we’re being forced to do two to three people’s work and only taking home one paycheck,” Hernandez says.

She adds that as multi-million dollar corporations, like McDonald’s, can afford to pay their employees more than just pennies on the dollar.

Hernández points out that the labor conditions are not only impacting her wallet, but her physical health. A few days prior, she was getting such bad headaches that she wasn’t able to work. After a doctor’s visit, she was diagnosed with high stress and depression. She’s now forced to pay out of pocket for her treatment. 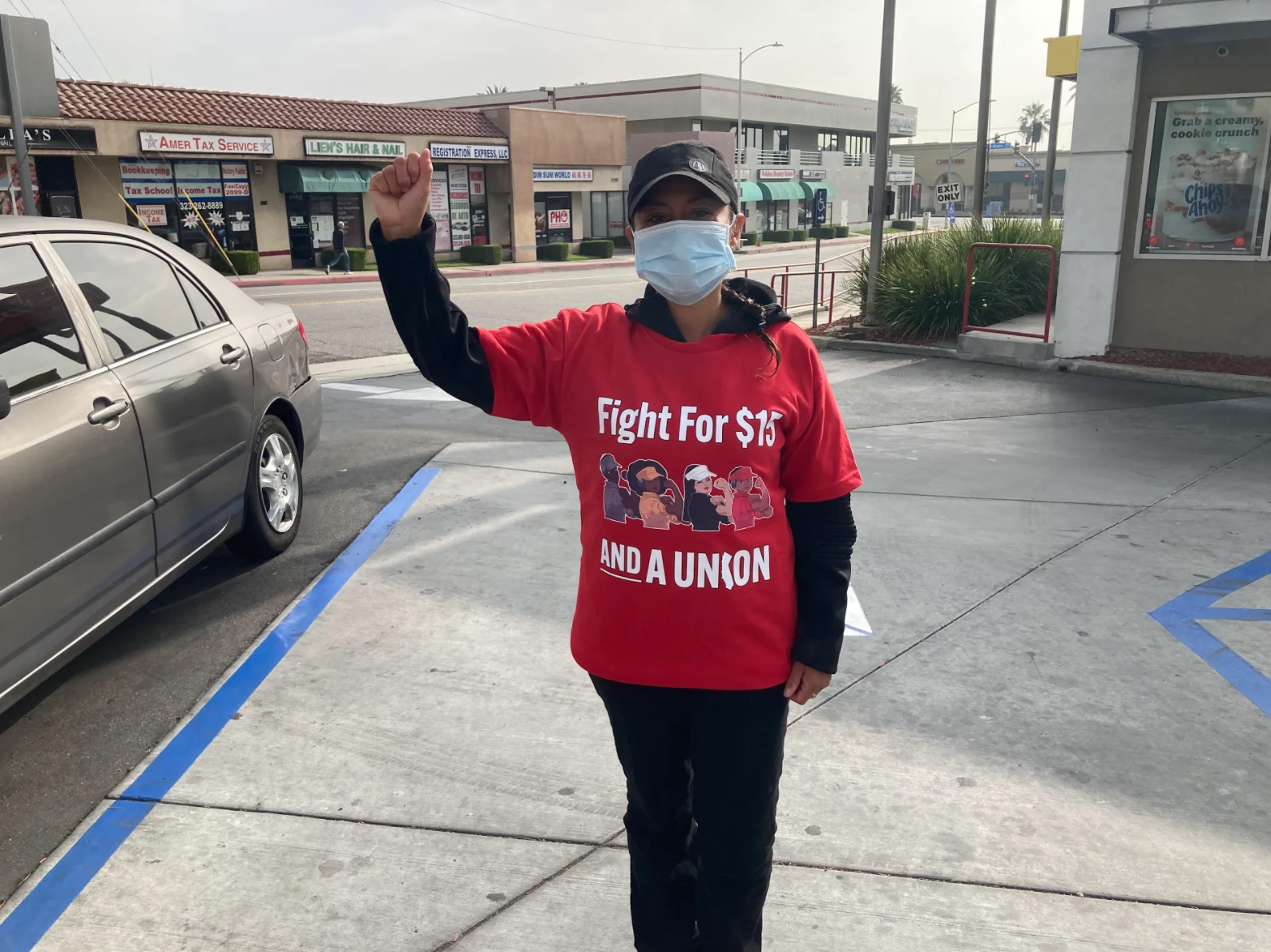 “We have to eat. We have to pay rent. We can’t wait until 2023,” former McDonald’s employee Lisette Aguilar says. “And what do they give us? Nothing. So they decided to close and left us without a job. We can’t live with these injustices.” Photo by Danielle Chiriguayo/KCRW

For Lisette Aguilar, working at McDonald’s meant eudring sexual harassment, mistreatment from patrons, as well as wage theft. She was also laid off from her restaurant’s location because it’s recently been closed down for renovations. She says employees at her West Hollywood McDonald’s were given only eight days notice about the closure. Under federal law, employers are required to give 60 days notice of closure.

“We have to eat. We have to pay rent. We can’t wait until 2023,” Aguilar says. “And what do they give us? Nothing. So they decided to close and left us without a job. We can’t live with these injustices.”

Without a steady income, Aguilar says she’s unable to pay bills or support her young son.

Getting a seat at the table

Fast food workers are also pushing for the passage of AB-257, or the Fast Food Accountability and Standards Act. If passed, the legislation would give fast food workers a seat at the table when enacting workplace conditions through the Fast Food Sector Council. It would be composed of workers, and representatives from franchisees and corporations, and they would set minimum standards for hours, wages, and health and safety concerns.

“We don't want sexual harassment in the workplace. We need PPE in the workplace,” says community organizer Kenia Alcocer. “We need to make sure that the space in which we are working is sanitary, but [are] also healthy mentally for workers.”

“In this country, we have 140 million poor and low-income folks, which means that a lot of those folks are working at places like McDonald's and not getting enough. So we're saying that there is plenty and enough in this country to make sure that workers have a good quality of life. We don't want to just be surviving. We want to be thriving.”

Tuesday’s protests are the latest in a string of labor strikes nationwide at companies such as John Deere and Kellogg’s. Next week, more than 30,000 Kaiser Permanente employees are also expected to walk off the job.

In response to the statewide strike, McDonald's USA told KCRW in a statement that its franchisees provided programs and benefits to their employees, including bonuses, local gift cards and flexible schedules. The fast food giant also maintains AB-257 would create "unnecessary obstacles for the small business owners who are best equipped to manage their restaurants and teams."