Inside the phenomenon of Gov. Jerry Brown When he was a young man, Jerry Brown wanted to be a priest. And while attending a Jesuit seminary in Northern California, he learned a Latin saying that stuck with him the rest of his life- Age Quod Agis. It translates to "Do What You Are Doing." Or put another way, focus intensely on your work and find worth through the doing of tasks. Intensity of purpose has always characterized Jerry Brown's life and unorthodox political career.

The son of former California governor, Edmund "Pat" Brown, Jerry Brown's calling in life eventually shifted from religion to politics. After attending Berkeley and Yale, and serving as California's Secretary of State, Brown was first elected governor of California in 1974. At 36, he was the youngest person ever to hold the office.

He campaigned as a liberal Democrat, with views shaped by the Civil Rights Movement and protests against the Vietnam War. But Brown also promised to be a straight talker, who wouldn't sugarcoat difficult issues or make promises that government could, or should, solve all problems.

Brown's youth and tell it like it is governing style quickly made him a political rock star. “In only a year, he has managed to zoom to national attention," said journalist Morley Safer in an early profile of Brown on “60 Minutes." "Every newspaper and television pundit has made the pilgrimage to California to examine the phenomenon."

A lot of the Brown phenomenon had to do with his personal life. He was a bachelor governor who dated, most notably singer Linda Ronstadt. He liked the company of intellectuals and bohemians, like Stewart Brand, the counterculture founder of the "Whole Earth Catalog."

Brown was also frugal. He sold the governor's official airplane and instead flew coach. He drove around in a 1974 Plymouth instead of the Cadillac offered to him by the state. And after his election, Brown continued living in his $250 a month Sacramento apartment instead of moving into the official governor's mansion that his predecessor, Ronald Reagan, had started building.

Brown mocked the 12,000 square foot, nine bedroom residence, once telling an audience "it kind of looks like a Safeway store." 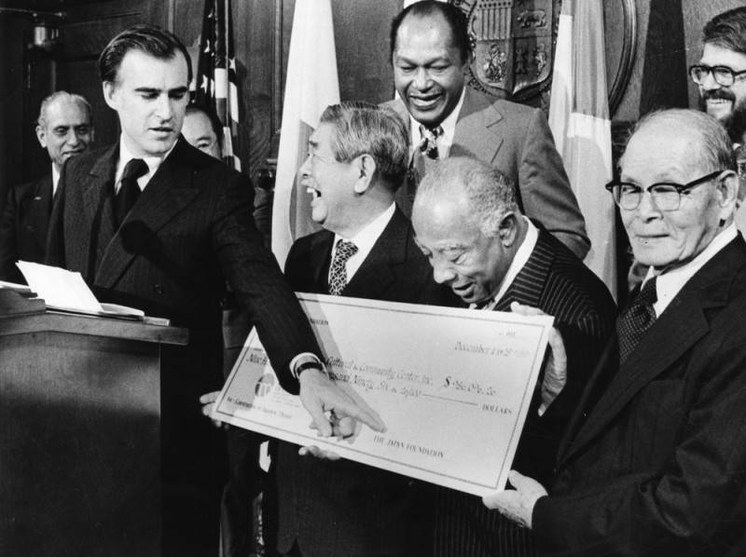 But beyond his lifestyle choices and rhetoric, what did Brown accomplish during his first two terms as governor?

He cut state spending (often to the chagrin of liberals), eliminated sweetheart tax breaks for the oil industry and championed cutting-edge environmental initiatives, like the country's first program to promote rooftop solar and energy efficient buildings.

Brown also had more unusual ideas, like his proposal for California to launch its own $5.8 million communications satellite. He also hired a former Apollo astronaut to be his science and technology advisor.

He appointed a record number of women and minorities to head state departments and commissions. Brown also appointed the first African-American, Latino and woman to the California Supreme Court. "I mean it was very much, 'we're going to blow this place up, we're going to bring in people who've never been in power before,'" said Pawel.

But even as he shook things up in Sacramento, Brown resisted efforts to slap a simple political characterization on him or delve into what made him tick. "I assume that will emerge in the news over time," said Brown to one interviewer, but looking like he didn't believe it himself.

However, just because Brown didn't act like an ordinary politician, it didn't mean he lacked political ambition.He ran twice for president while governor, once in 1976, the other in 1980. He was unsuccessful, but his fundraising strategy of relying on small donations later became a model for other candidates.

After another failed run for a U.S. Senate seat, Brown's life took many twists and turns. Long a spiritual seeker dating back to his days as a Jesuit seminarian, he traveled to Japan to study Zen Buddhism. He then went to India to work with Mother Teresa among Calcutta's poor.

After returning to the United States, Brown became chairman of the California Democratic Party.

And in 1992 he made a third presidential bid. That's when he bitterly feuded with another candidate who would go on to win the election, a young governor from Arkansas named Bill Clinton. During one debate,  Brown accused Clinton of inappropriately funneling money to Hillary Clinton's law firm. Clinton was quick to shoot back: "I don't care what you say about me, but you ought to be ashamed of yourself for jumping on my wife. You are not worth being on the same platform."

After Brown lost the 1992 primaries, he moved to Oakland. There he hosted a nightly talk radio show, giving him a platform to rail against the influence of money in politics and the danger of plutocracy.

But away from the radio microphone, Brown was also plotting his political comeback, which few political experts thought was possible so many years after so many political crash and burn failures.

In 1998, Brown ran for mayor of Oakland. He got elected and then re-elected four years later.

As mayor, the political populist became a civic booster, promoting an aggressive agenda of business investment and redevelopment, with a goal of attracting 10,000 new residents to Oakland's distressed downtown. Some in the city started calling Brown's plans "Jerryfication."

Brown vaulted back into state government when he was elected California's Attorney General in 2006. And then, as the state was licking its wounds from the collapse of the housing market and the Great Recession, Brown once again ran for governor against Republican Meg Whitman.

His pitch to voters in a state devastated by surging home foreclosures and high unemployment wasn't that different from what Brown said in the 1970s - a promise to tell hard truths and make difficult decisions. "Our state is in a real mess, " Brown said in one campaign commercial. "And I’m not going to give you any snappy slogans or phony plans that don’t go anywhere."

He got elected. And at 72, the man who was once the youngest person to hold the gubernatorial office also became the oldest. Four years later, Brown was re-elected, his fourth gubernatorial term in two different centuries.

During his second stint as governor, Brown was praised for restoring the state's finances, turning a $27 billion budget deficit he inherited into a $29 billion budget reserve that Brown maintained is necessary to weather future bad times.

But Brown has been criticized for championing a controversial gas tax increase and a high-speed rail program that remains mired in multi-billion dollar cost overruns and construction delays. In March, Brown called criticisms of the bullet train "bullshit."

Brown re-emerged on the national stage by challenging the Trump Administration's environmental and immigration policies at just about every turn. He made increasingly dire warnings about the need to fight climate change, often in very personal terms.

Speaking before a state legislative committee last year, Brown said staving off a warming planet was necessary for the health and safety of future generations. "This isn't for me," Brown said, his voice starting to rise to a near shout in the legislative chamber. "I'm going to be dead! It’s for you, and it’s damn real."

Brown, who married lawyer Anne Gust in 2005, said that when he leaves office next month, he wants to spend more time at his family's ranch in the hills north of Sacramento. But Brown biographer Miriam Pawel says don't expect Brown, who's now 80, to spend his time living in quiet retirement or reminiscing about past achievements.

“Oh, no, no, no," said Pawel. "Quite the contrary. And I think he takes umbrage at the word legacy. The reason is that he views legacy as something that you have when you stop doing things. And he does not intend to stop doing things until he drops dead."

As Jerry Brown learned in that Jesuit seminary long ago: Age Quad Agis, or "Do What You are Doing." And Jerry Brown's life has always been about doing.

How to tell if a cannabis dispensary is legal? Pull out your phone KCRW Features Jun 16