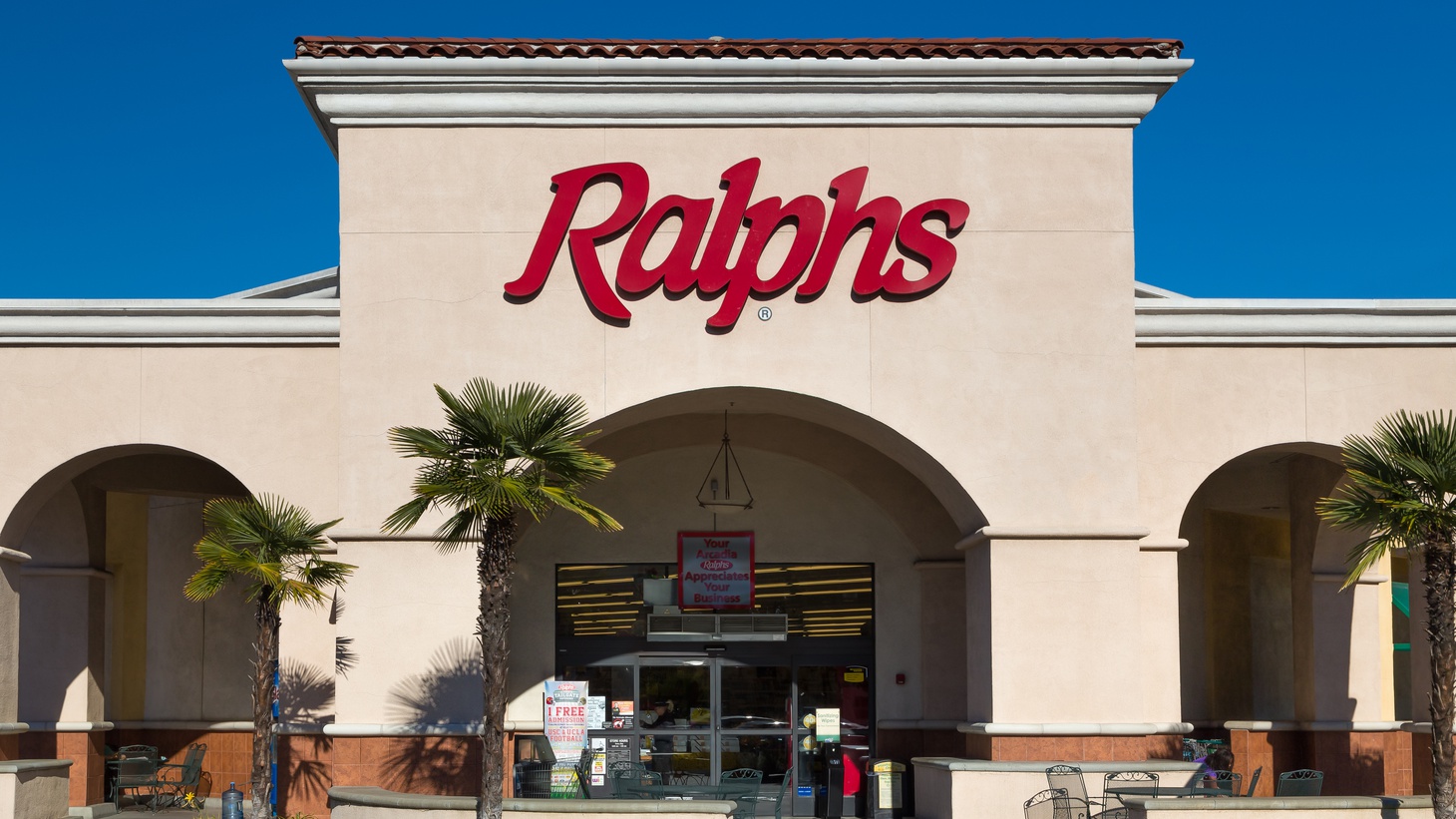 Workers at Ralphs and Food 4 Less, which are subsidiaries of the Kroger Company, report feeling underpaid, overworked, and underappreciated. The sentiments are in line with the findings of a new report from Economic Roundtable. Photo by Shutterstock.

No matter how much Jeanne Olsen works, there’s never enough money in the bank to cover the basics. The 59-year-old, who lives in a modest apartment near Glendale with her son, has spent the last four years working six days a week at a Ralphs store in La Cañada. Today, she makes $15.90 an hour, following the new state-mandated increase in minimum wage. But for much of 2021, she made $14.25 an hour.

“I'm struggling everyday to make ends meet. …  And I'm always so tired,” she tells KCRW. “The only bills I have are my rent, my electric bill, my gas bill, the internet, [and food]. I frequently make choices between if I can eat and paying a bill because there's no fun money left over.”

Olsen is one of the thousands of Kroger grocery store employees that report feeling underpaid, overworked, and underappreciated. They’re sentiments in line with the findings of a new report from the nonprofit Economic Roundtable.

Surveying more than 10,000 workers, the report recounts stories of workers from western states including California, Washington, and Colorado. Aptly named “Hungry at the Table,” the report found that 78% of workers experience food insecurity, a third live at or below the federal poverty line, and one in 10 are currently experiencing or have been homeless in the past year. The research was commissioned by four locals of the United Food and Commercial Workers Union.

Olsen’s hourly rate in 2021 was nearly a dollar less than minimum wage in the City of LA. Although it might not have seemed like much, the disparity added up.

To supplement her income, Olsen opted to collect cans and plastic bottles and exchange them for cash at a local recycling center.

“I have a tiny little apartment. But about a third of it, I have to devote to recycling. … That $100 that I get a month for recycling — and let me tell you, that's a lot of recycling $100 — that is a choice that I can make between having food for me and my son to eat.”

Because she doesn’t own a car, she collects what she can on foot on her way to work. Sometimes, she’s able to catch a ride on the local bus line. Due to the surge in rideshare pricing, she rarely takes an Uber or Lyft. Otherwise, she’s forced to make the hour and a half journey by foot.

Staffing shortages amid the pandemic have hit an all-time high, and it’s forcing the grocery workers to pick up the slack. That includes the workload for Eric Cortez, who works at a Ralphs in Cerritos. Over the last two years, he says workers on his overnight shift have dropped by half, which adds extra stress on his already-demanding shift.

“When I first got hired, we had maybe five members on each side of the store that was helping get everything stocked. Now we're going down. At the store I am now, on any given night is maybe four of us, maybe five total,” he explains.

Olsen points out that staffing shortages not only impact morale on staff, but also undercuts the customer service that patrons can expect.

“They want us to work these miracles within a certain set time of hours. And you can never get it done and help customers too. That's why you do go into some stores, and nobody wants to help you,” Olsen says. “They have their lists of tasks to do that day, and customer service cuts into those tasks.”

Cortez says that after long nights of stocking shelves, he still faces incredulous managers who expect the job to already be done, even with staffing shortages.

“When they get there, we're tired. We don't need them asking, ‘Oh, how much longer?’ As far as I'm concerned — I never say it — but if that's the way you feel, roll up your sleeves and come in with us. We're busting our behinds all night. We don't need any lip service.”

He adds, “Instead of four people doing a total of eight hours overtime, why don't you add that extra body, and we have no overtime and everybody goes home on time and gets enough rest for the next day?”

Morale and appreciation are low

Before his transfer to a Ralphs in Cerritos, Cortez worked at a store based in Long Beach. It’s since closed due to a dispute over hazard pay between parent company Kroger and the city of Long Beach, citing an inability to afford the extra money. Cortez says the decision is indicative of not caring enough about its own employees.

In response to the study, Ralphs wrote to KCRW:

Food 4 Less successfully reached an agreement with UFCW, including locals 324, 770 and others, in July 2021. With the current collective bargaining agreement for Ralphs and other grocers expiring on March 6, 2022, Ralphs is committed to negotiating and reaching an agreement that significantly invests in our associates by putting more money in their pocket while maintaining affordable healthcare and a stable pension for retirement — a benefit that 93% of corporations no longer provide to their associates.”