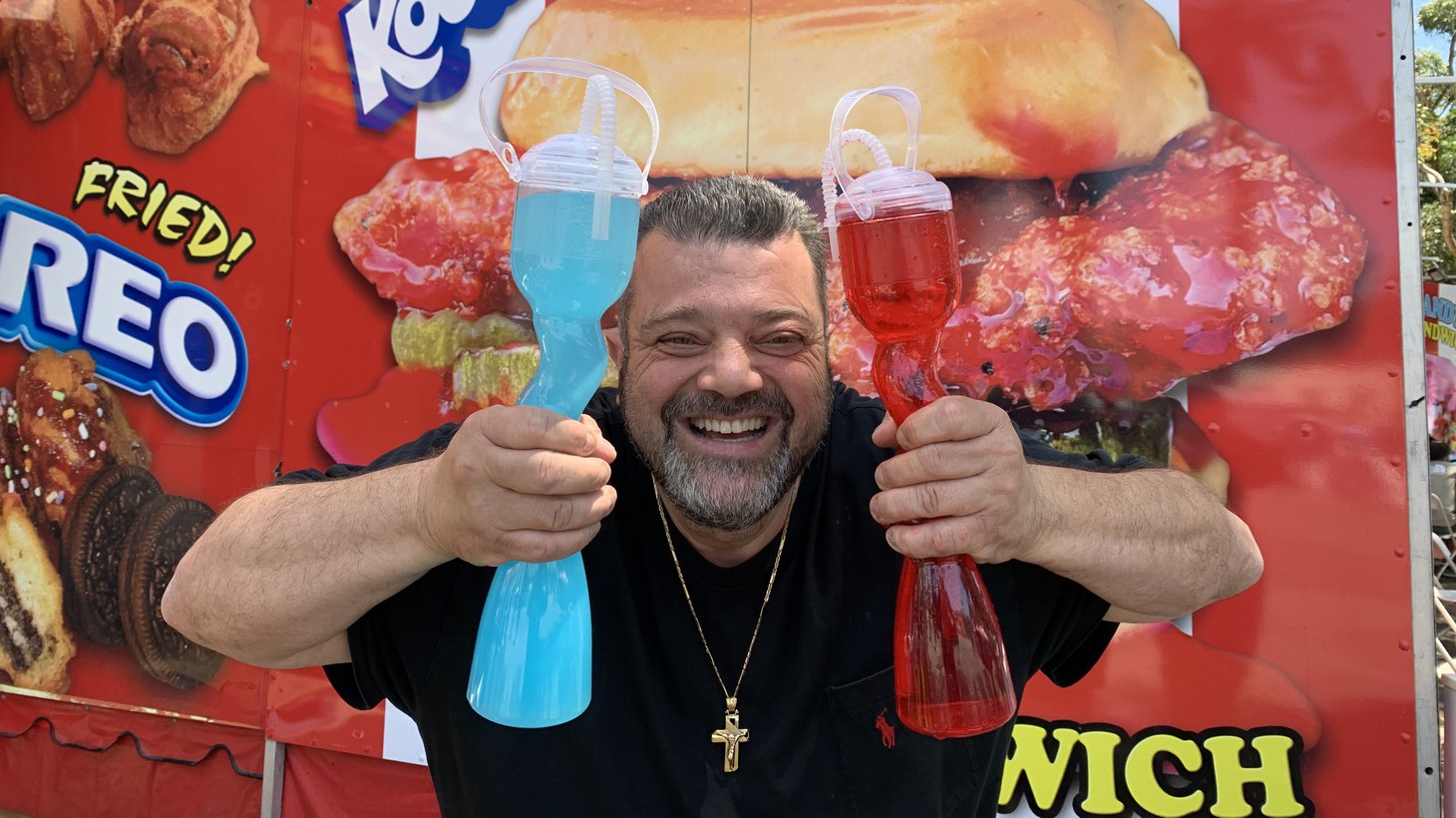 Charlie Boghosian, owner of Chicken Charlie’s, has been selling unique variations on chicken at the LA County Fair for 25 years. This year’s innovation: the Kool-Aid fried chicken sandwich. Photo by Andrea Bautista/KCRW.

The Los Angeles County Fair is back after a two-year COVID-19 hiatus. Previously, the fair was held in September, but now it runs through May, so you can enjoy it at a cooler time of year.

The fairground in Pomona has a petting zoo, live music and carnival rides. It’s enough to work up an appetite. KCRW rounds up a few of the countless treats you might want to try. 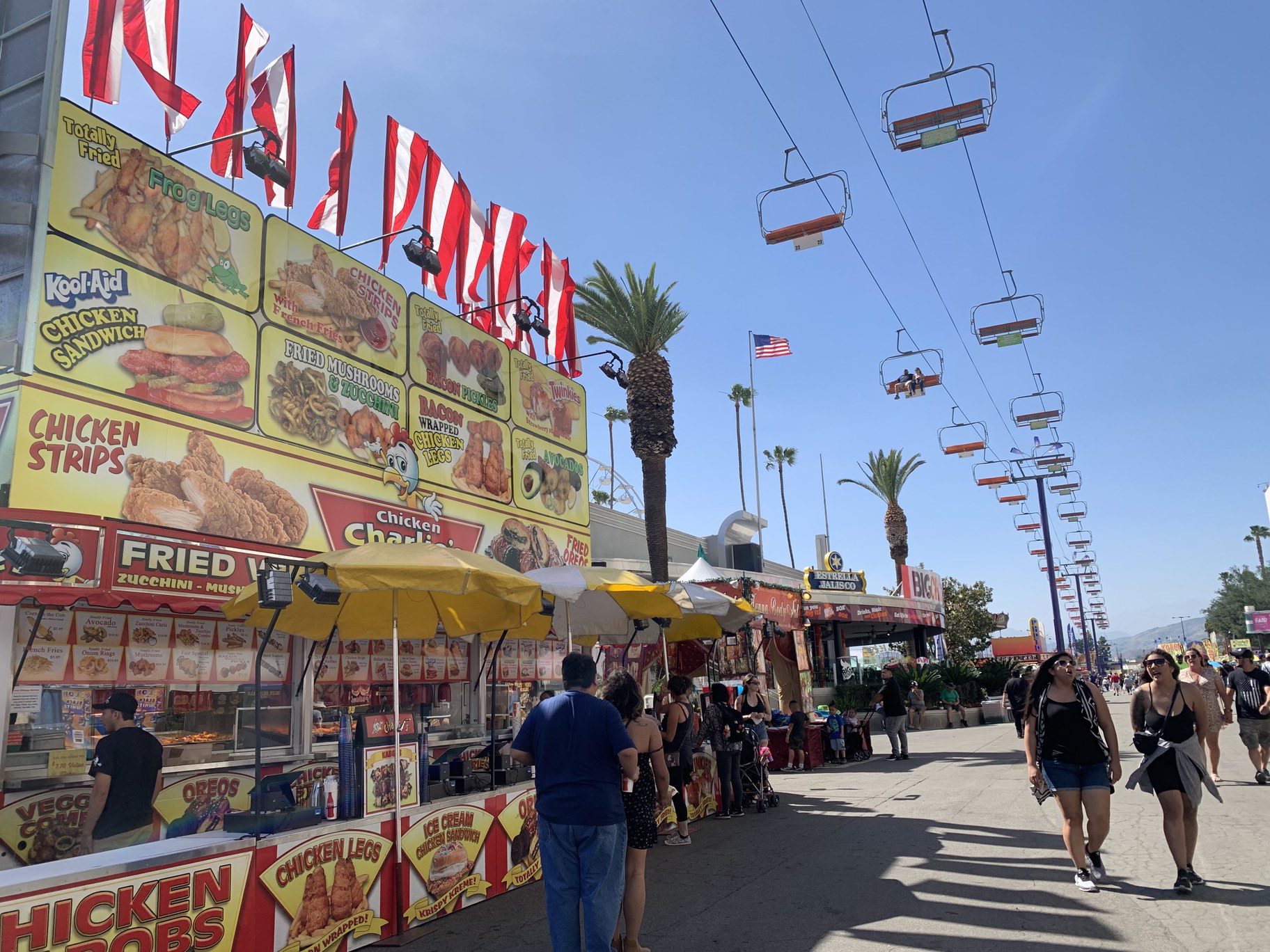 There are dozens of food stands spread out across the fairground in Pomona. Photo by Andrea Bautista/KCRW.

Besides the classics like barbeque, turkey legs, corn, cotton candy, and caramel apples, the LA County Fair is also well known for its wild and fun creations like the Flamin’ Hot Cheetos cheeseburger, big daddy cheeto cheese dog, and even fried butter. 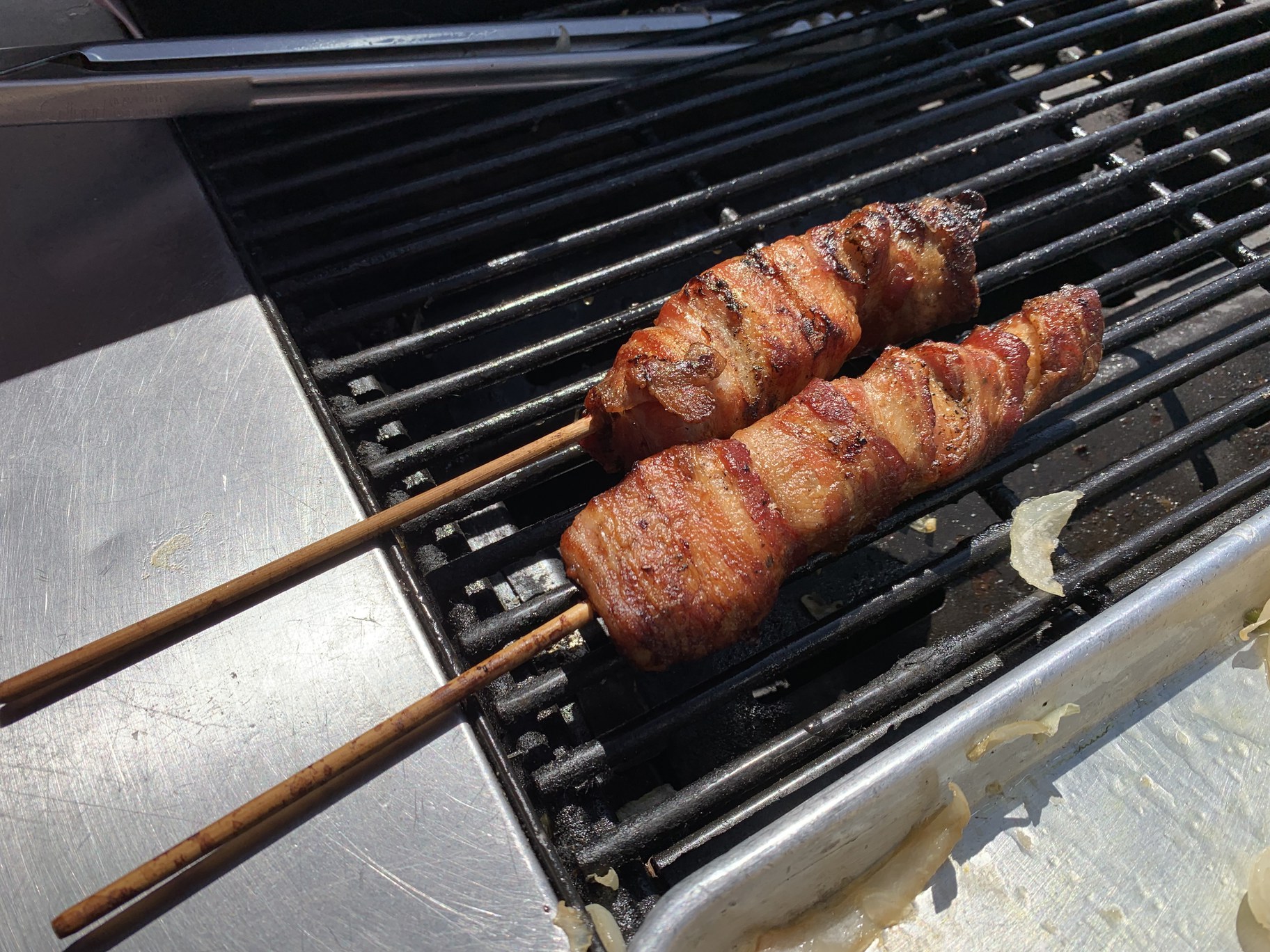 The pork belly on a stick is wrapped in two feet of extra thick honey smoked bacon. Photo by Andrea Bautista/KCRW.

Chicken Charlie’s is also a fair favorite. The creators of deep-fried Oreos have a new innovation this year: the Kool-Aid fried chicken sandwich. They dip the fried chicken in a Kool-Aid sauce and place it on a potato bun with mayo and spicy pickles. (We tried it – it’s better than it sounds.) 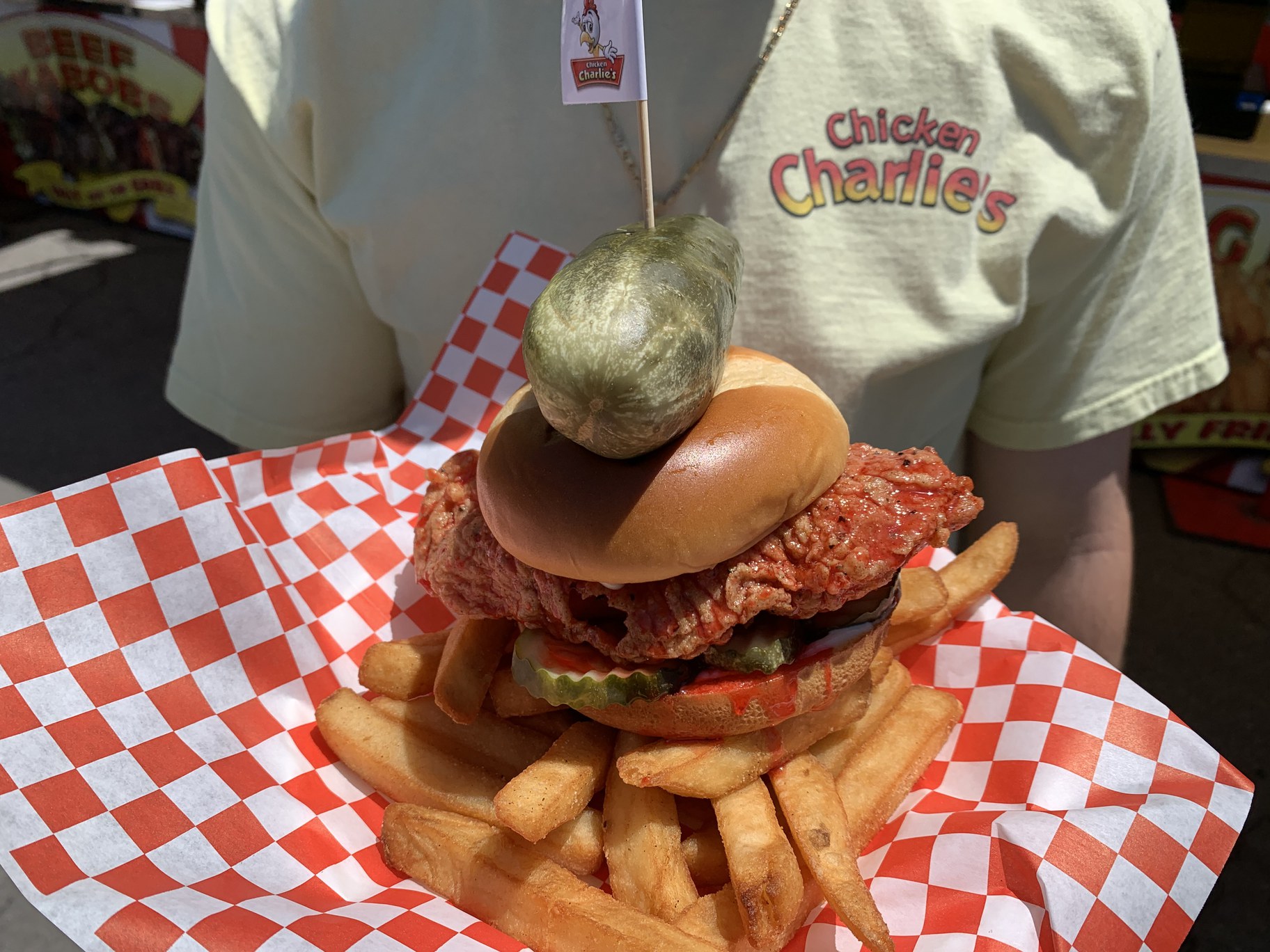 Looking for lighter options? The LA County Fair does offer salads, veggie bowls, grilled fish tacos, and even some vegan and vegetarian options.

In the dessert department, the fair is serving up the watermelon Dole Whip taco. It’s a huge slice of watermelon carved out in the middle and filled with pineapple Dole Whip, topped with Tajín, and comes with a chamoy straw. 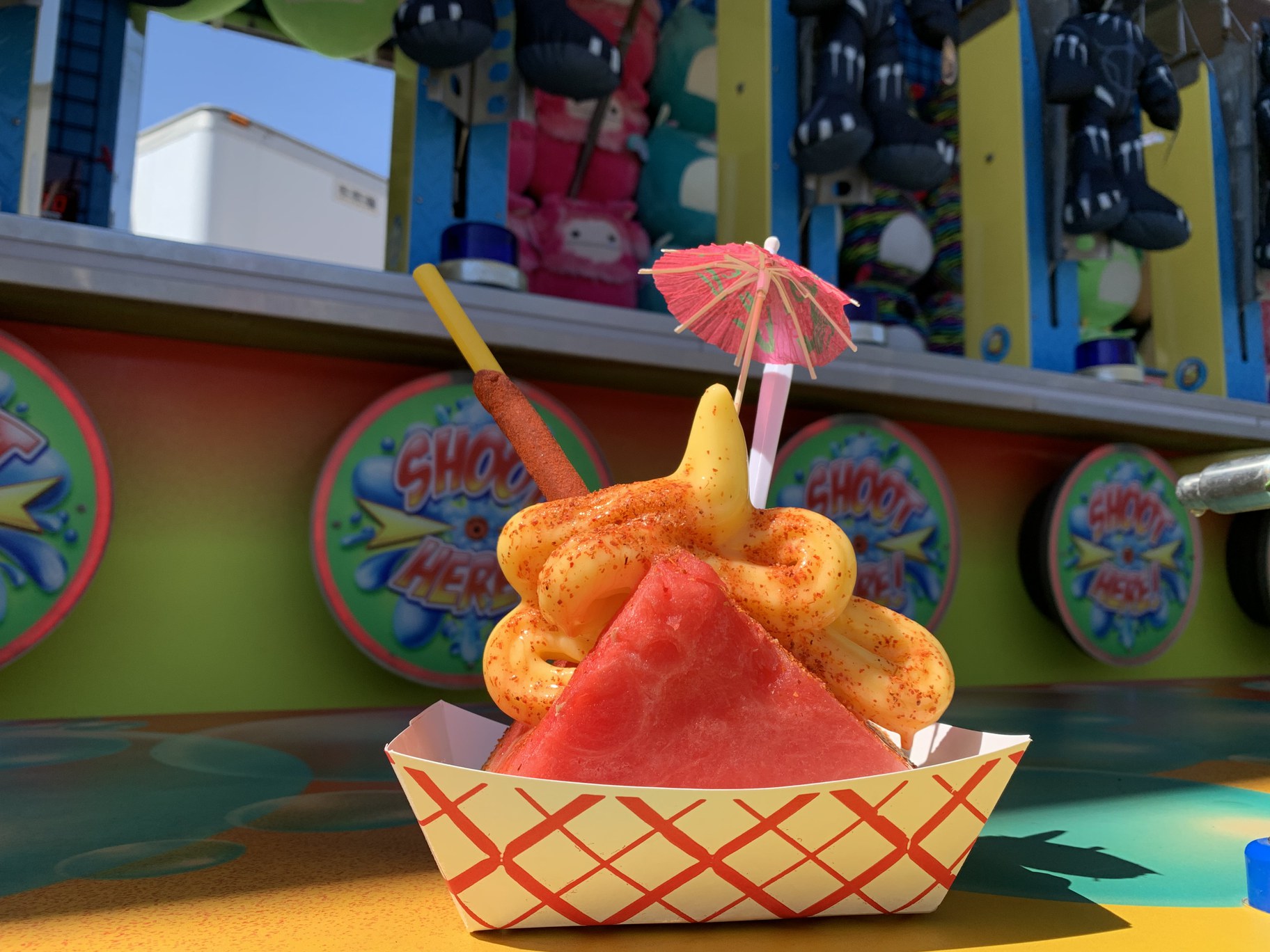 One of treats at the LA County Fair this year is the watermelon dole whip taco. Photo by Andrea Bautista/KCRW. 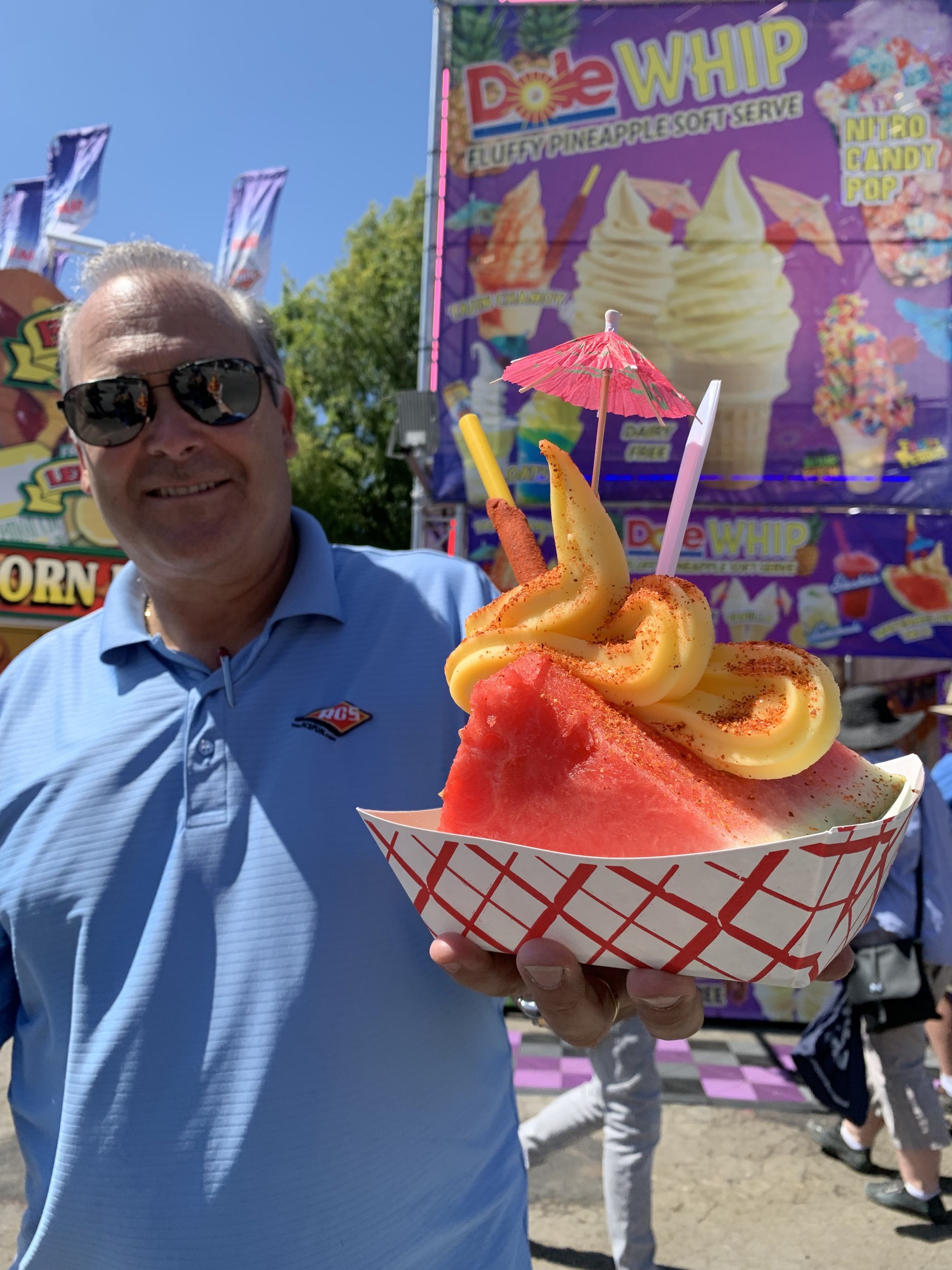 Midway Gourmet Dominic Palmieri is in charge of dozens of food stands at the LA County Fair. Photo by Andrea Bautista/KCRW.

The LA County Fair is open at the Fairplex in Pomona on Thursdays through Sundays until the end of May, plus Memorial Day Monday.