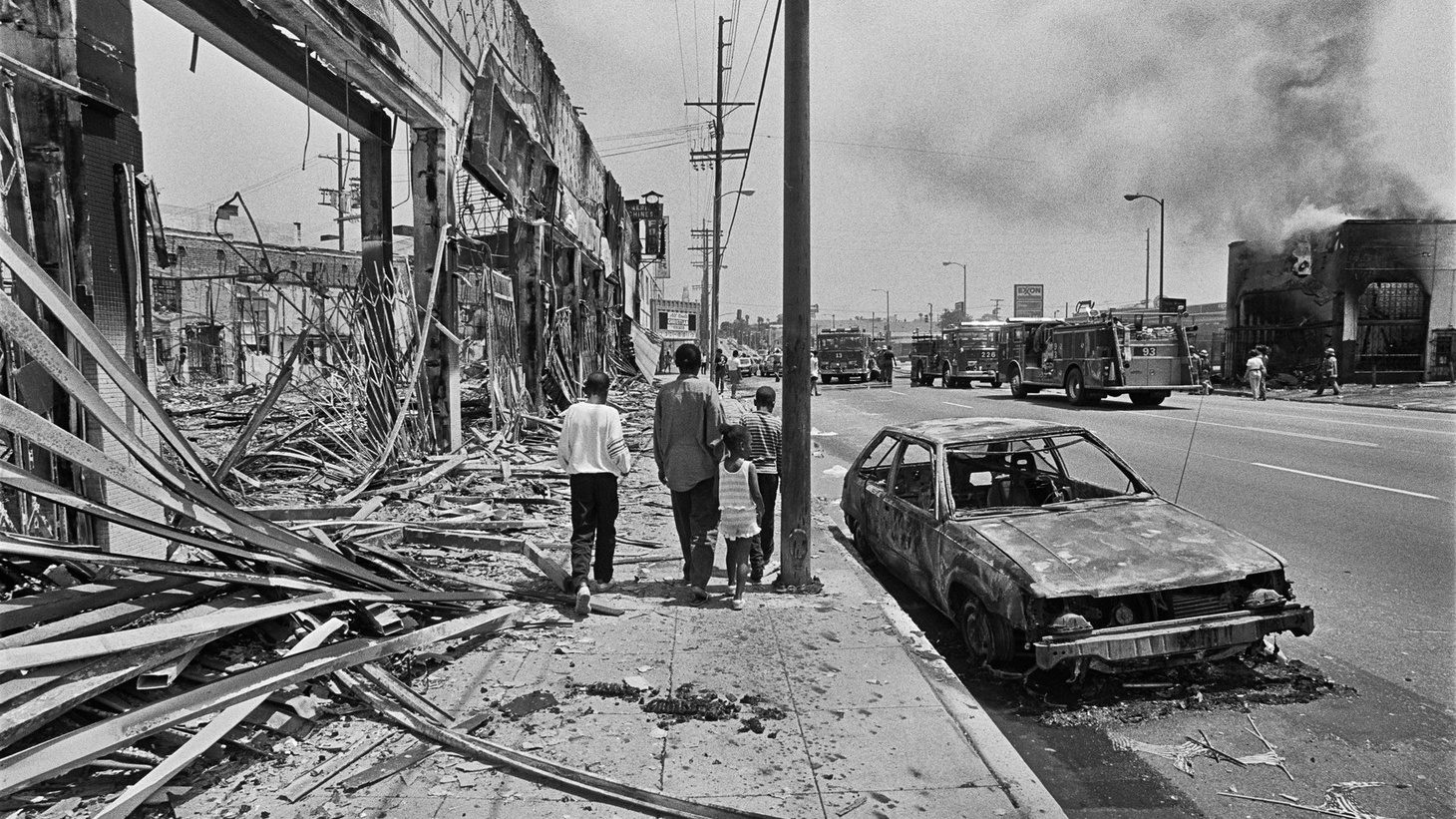 A group of children walk by damaged businesses in South Los Angeles during the LA Riots. “Rodney King was the last straw,” recalls former KJLH-FM News Director Carl Nelson, who led the station’s Peabody Award-winning coverage during the 1992 LA uprisings. “[Black residents] were just fired. They said something’s got to be done.” Photo by Ted Soqui.

On a typical day, KJLH-FM on Crenshaw Boulevard would play R&B and classic soul music for fans of Los Angeles. But when the LA Riots engulfed the city over several days in April 1992, KJLH-FM had a front row seat to the massive civil unrest.

After the acquittal of four white LAPD officers in the beating of Black driver Rodney King was announced, KJLH quickly shifted gears to become the eyes and ears for the community.

"When it exploded, we could see it," remembers Carl Nelson, KJLH’s news director at the time. "There was a store that [had] TVs and radio, and [we saw] people coming in and smashing out the radios and TVs."

As the radio station quickly became surrounded by destruction and violence, DJs and staff switched formats, dropped their music and commercials, and started taking callers and reporting on events. KJLH became a lifeline for those who tuned in, according to the Peabody Awards, which celebrated the station’s coverage of events.

“I instructed some of the DJs who were working, ‘Hey, go out into your community and tape record.’”

The unrest and the violence that emerged weren’t surprising for Nelson. He remembers how angry people were after the March 1991 killing of Latasha Harlins, a 15-year-old girl shot by Korean store owner Soon Ja Du because of a dispute over Orange juice.

“Rodney King was the last straw,” explains Nelson, who recalls the frustrations from the callers. “They were just tired. They said something’s got to be done.”

People called in over a range of issues, but one call that stuck with Nelson was from a Black attorney who worked in Century City. Nelson says the caller cried on air, thinking she, too, could be shot because she was Black — no matter her education, the car she drove, where she lived and worked.

“A lot of people heard that frustration, and they said, ‘Wow, if she feels that way, what about us who don’t have to go to Century City, who are not attorneys, who don’t live in Baldwin Hills and drive a Mercedes? She understands what we were going through.’”

LA’s Korean community was also deeply impacted by the uprising, suffering an estimated $400 million in losses.

After the unrest was over, KJLH included the Korean American community in their conversations about how to rebuild. One of the efforts was a joint broadcast with Radio Korea, a Korean-language station based in Koreatown.

“We decided we needed to have a conversation between both groups. Nobody else — just the Black community and the Korean community about what is the genesis of this problem.”

He found the summit held between the groups to be productive because the Korean residents were able to learn more about Black America beyond what they saw, read and were told. Meanwhile, the Black community was able to work around distorted views about the Korean community being interlopers.

“We were like two ships passing, really in a parallel universe, which is South Central Los Angeles. We never spoke, never talked until we had the summit,” Nelson says. “All of a sudden we got Korean food trucks coming through South Central, people sampling Korean food.”

While there has been progress between the two communities, Nelson fears not enough has been done since 1992 to move the needle on police brutality and racism against the Black community. A deja vu moment came in 2020 when George Floyd was murdered by police.

“We saw his life being squeezed out of him on camera. [With] Rodney King, they told us what we saw — beating him near to death — wasn’t happening. Our eyes were lying,” he says.

Nelson is hopeful the next generation can hone in on the lessons learned to prevent similar situations from happening again, especially as the younger generation of all ethnicities becomes more aware of historical and social issues.

Research has found young people who took part in the in the protests after George Floyd’s murder were more racially and ethnically diverse.

“They’re not going to sit back because their parents told them about slavery, and they heard about Jim Crow and all the injustices.”