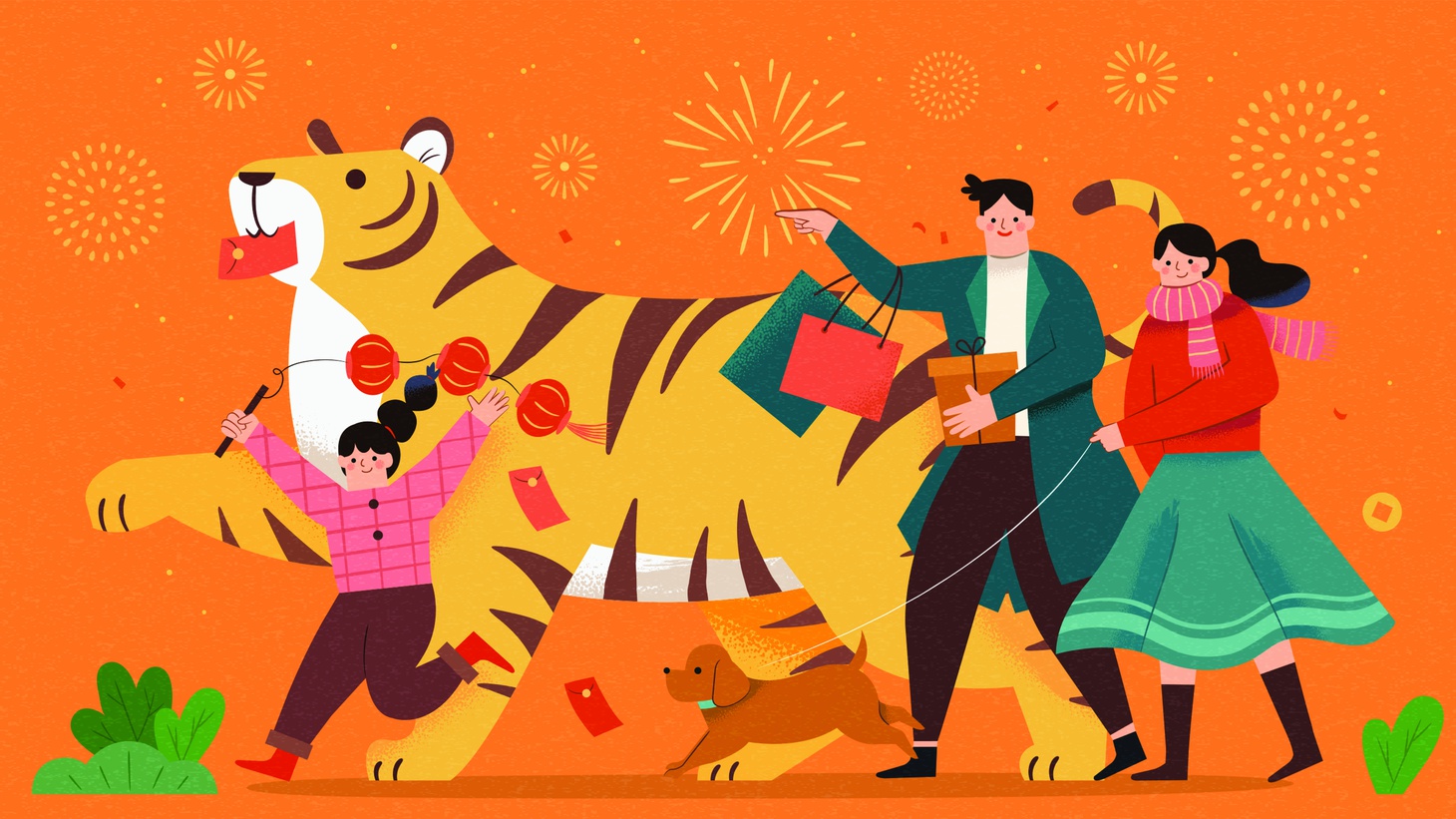 Millions of Californians of Asian descent will celebrate the Lunar New Year next week. While the holiday falls on the same day, each Asian subgroup has its district traditions. Photo by Shutterstock.

Among nearly 6 million Asians in California, many will once again enjoy Lunar New Year celebrations — February 1 to February 15. Although it’s frequently referred to as Chinese New Year, other Asian communities — including Vietnamese, Koreans and Japanese — observe the holiday, which marks the first moon in the lunar calendar. They all have distinct food and traditions — this time to celebrate the Year of the Tiger.

Los Angeles has the second largest Chinese population in the U.S. Many of the 670,000 Chinese Angelenos will start the Year of Tiger by deep-cleaning homes and decorating them in red to bring good fortune.

Families and friends often get together to honor their ancestors. It is capped off with a large family meal, or “nián yèfàn.” It is frowned upon to show up to another person’s household empty-handed, so many visitors bring fruits or candies, and children and elders usually receive red envelopes filled with money. 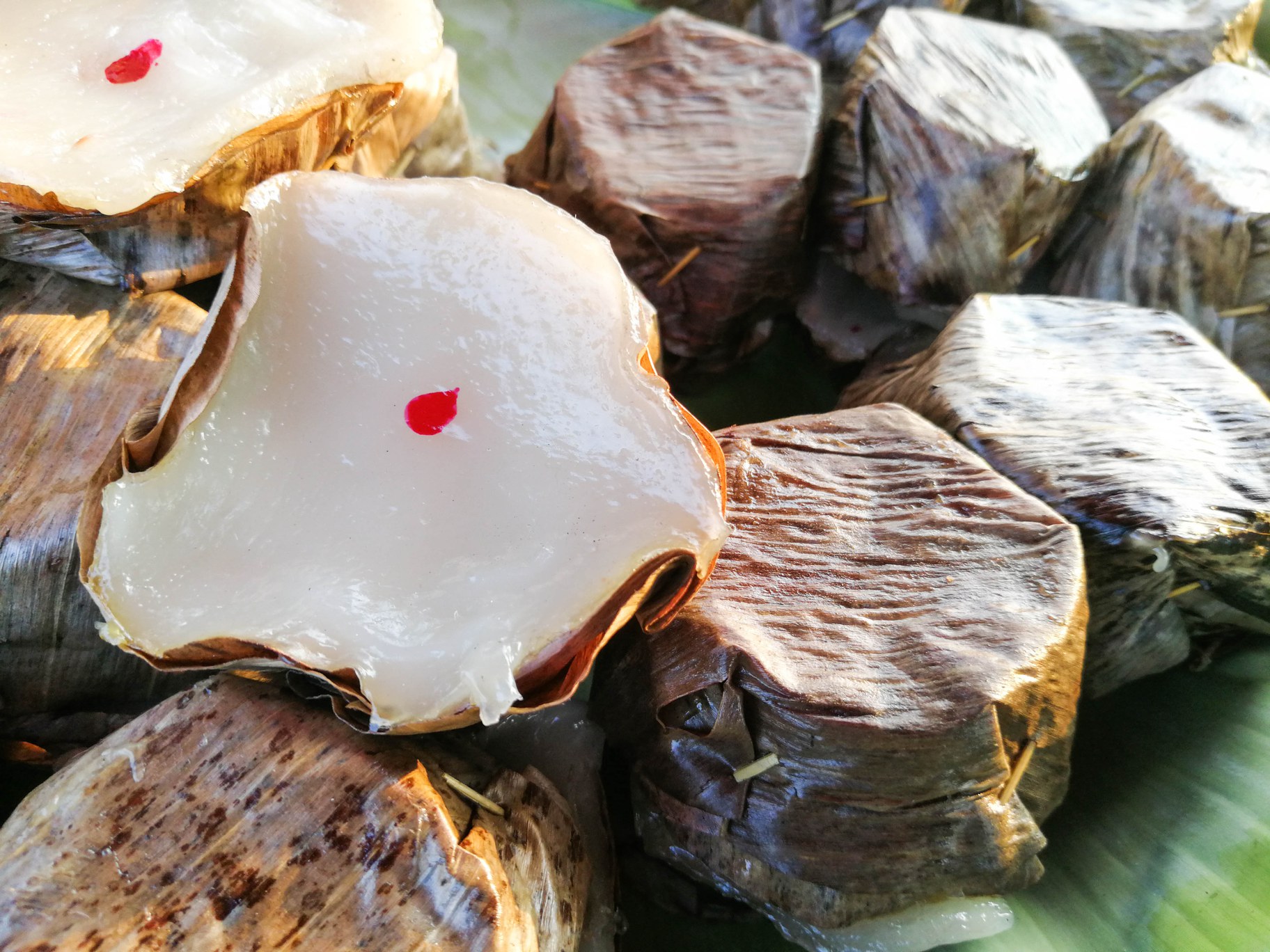 “Nian gao” is a sticky rice cake that represents increasing your prosperity. Photo by Shutterstock.

Fish is a key part of the meal and symbolizes prosperity. Jiaozi dumplings and spring rolls signify wealth. Dumplings are considered lucky because they resemble traditional coin purses. Noodles — because of their long strands — represent longevity. “Nian gao” and “tangyuan” are rice cake delectables reserved on the New Year. 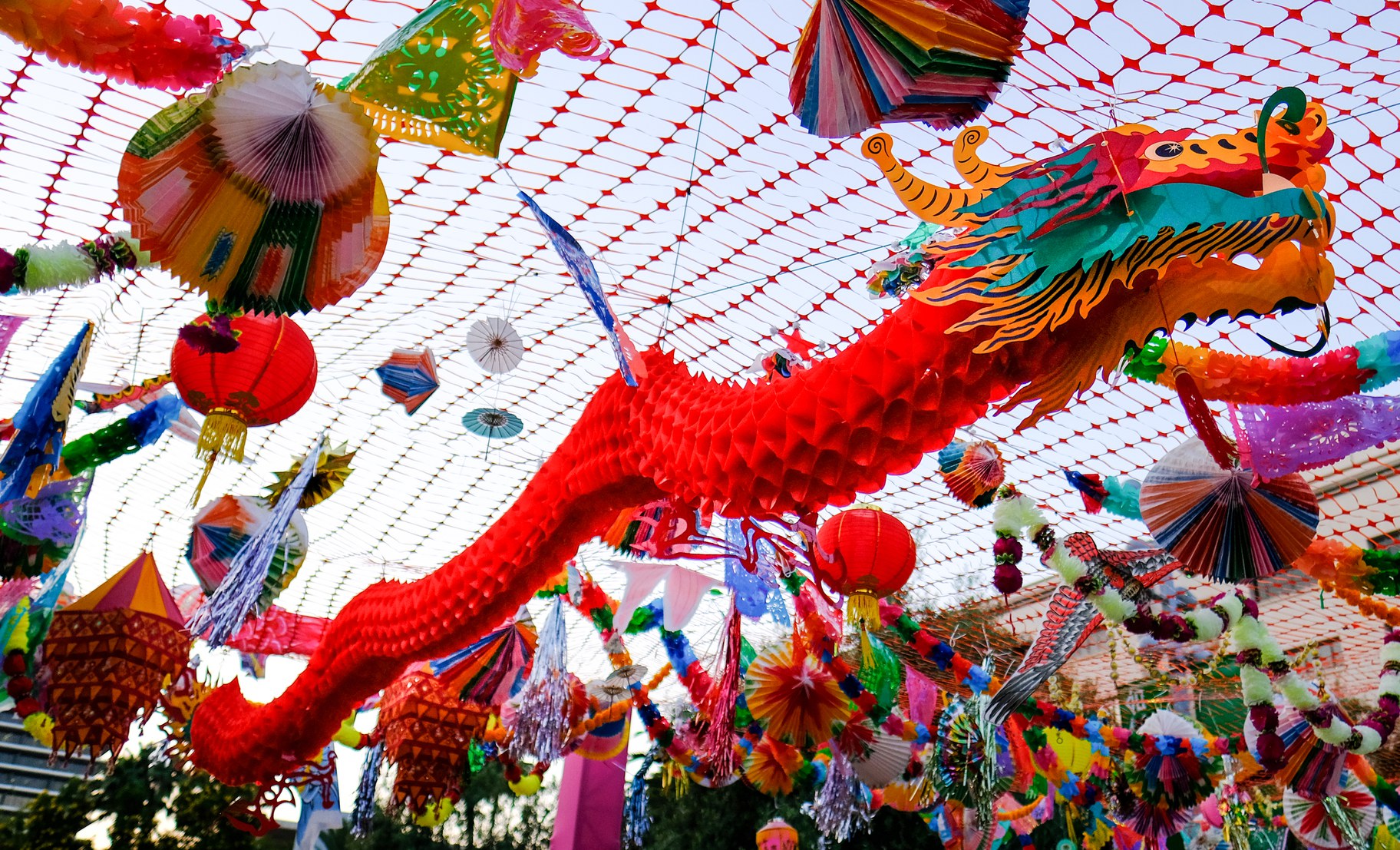 A dragon is a centerpiece to a New Year festival. Photo by Amy Ta.

Dragons and lions are powerful symbols in Chinese culture and are the centerpieces during the New Year parade or festival. Fireworks are sparked because of the mythical beast called “Nian.” It is said to show up every New Year’s Eve, and people would fight off the monster by using burnt and cackling bamboo.

“Tết,” which honors deceased ancestors, tends to be celebrated for an entire week starting on February 1.

Homes must be spotlessly clean days before the new calendar begins. Many Vietnamese households have yellow “Hoa Mai” plants in the living room. Families display a platter filled with melon seeds, candied coconut strands, and nuts alongside a plate of carefully stacked fruit, burning incense, and a photo of a loved one who died. 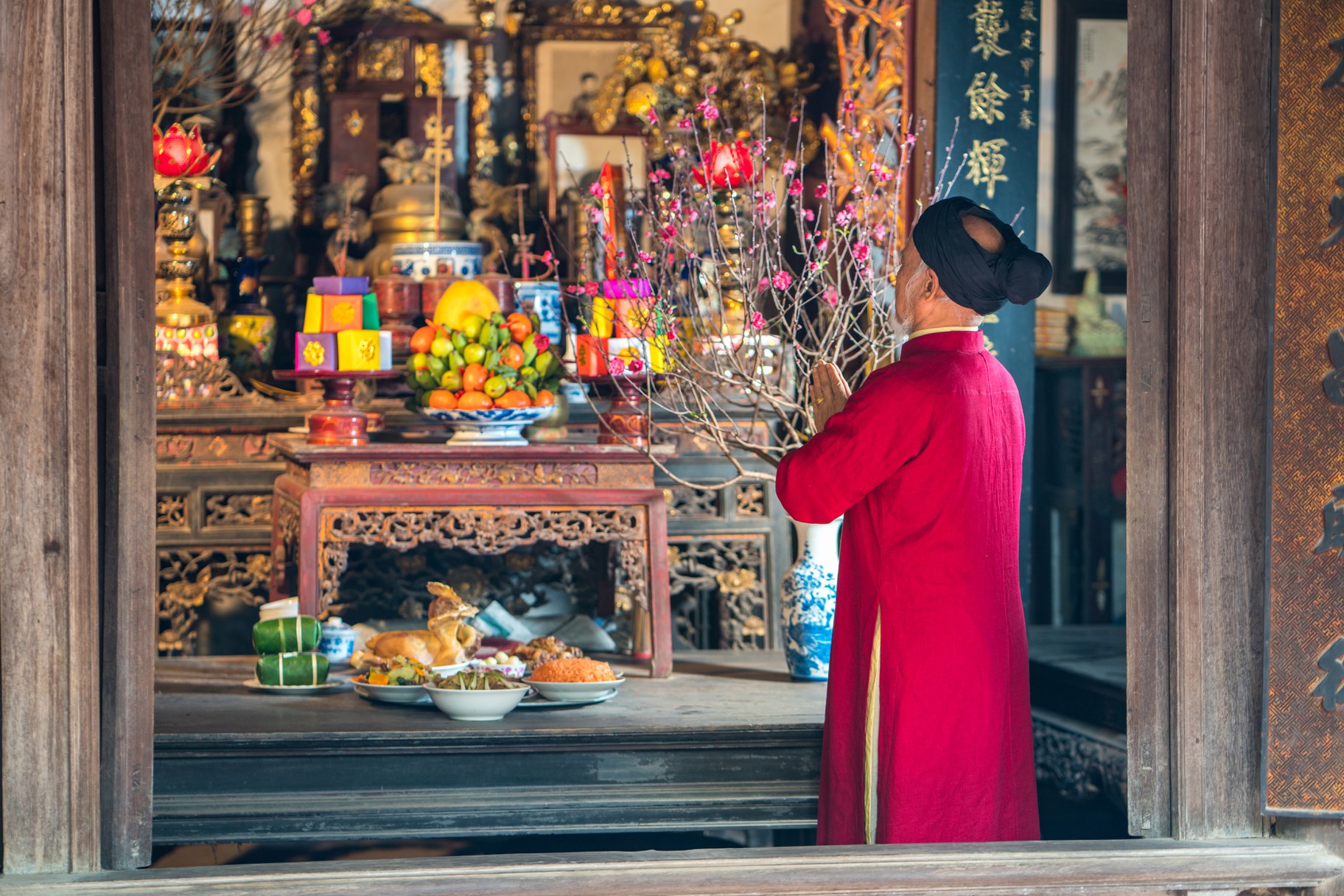 For Vietnamese, Tết is an opportunity for families to gather, decorate their homes, and wish for prosperity and well-being. Photo by Shutterstock.

The most common traditional Tết food is “Bánh Chưng,” sticky rice cakes commonly filled with pork or (mung) beans. Legend has it that a Viet king held a competition to see which of his sons would make a delicious dish in honor of ancestors on the New Year’s Day, and the poorest son ended up creating “Bánh Chưng” with simple ingredients. 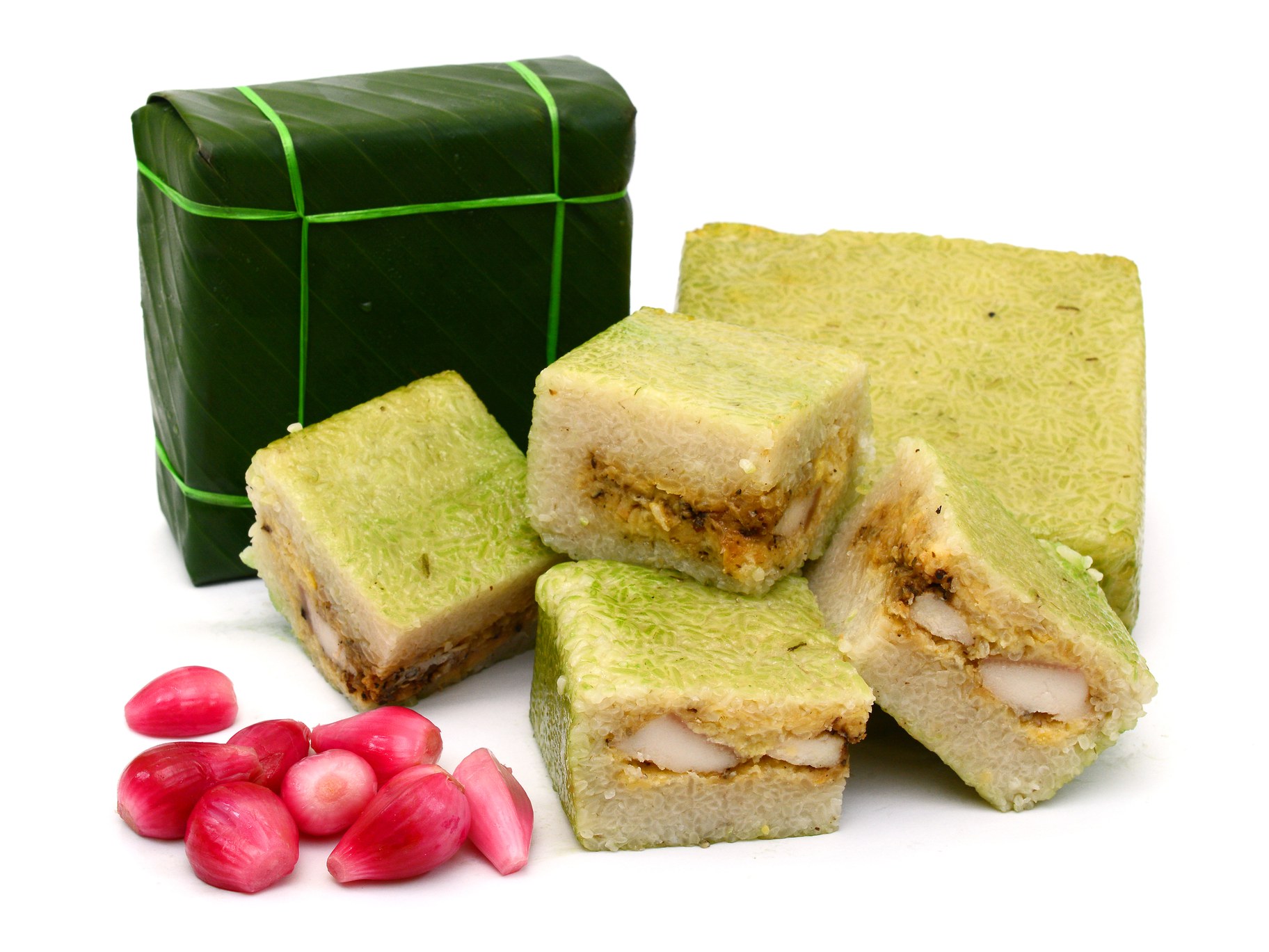 In some cases, another offering table is placed outside the front door of a home to alert wandering spirits that they’re welcomed. Outside, someone is burning paper money and clothes to offer to the spirits that may surround the home.

In Orange County, Little Saigon is the oldest, largest, and most prominent community of Vietnamese people in the U.S., and it’s hosting the UVSA Tết Festival on February 5 and 6 with cultural activities, including a firecracker show.

“Seollal” is one of the major holidays in Korea. In Los Angeles, home to the largest population of Koreans outside the Korean peninsula, many family and relatives will gather to perform rituals, eat traditional foods, and play folk games. 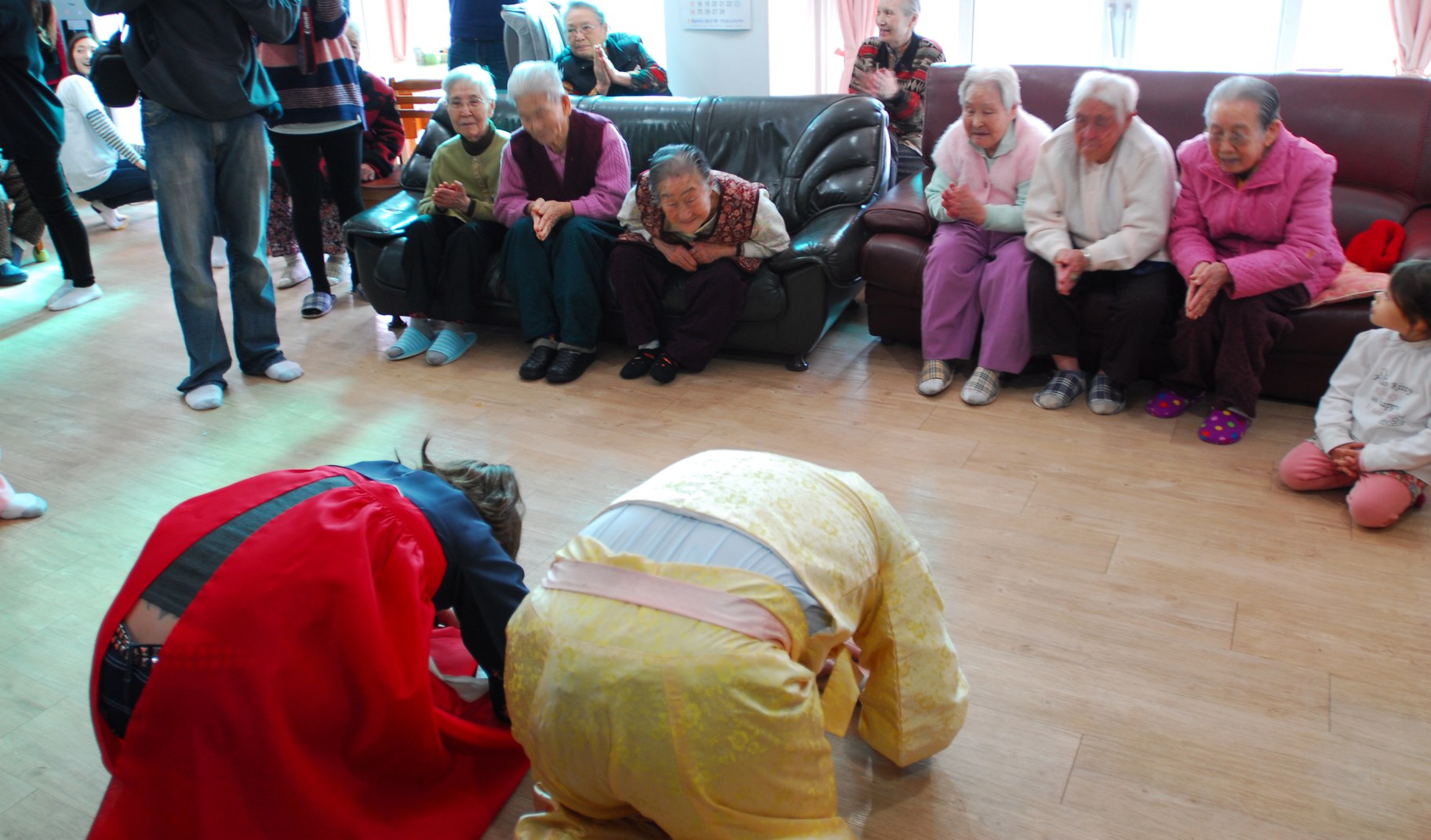 “Saebae” is a tradition that Koreans perform to their elders by kneeling on the ground and bowing deeply. Photo courtesy of USAG-Humphreys.

One of the rituals is “Saebae,” a formal bow that younger people give to their elders to wish them good health, according to Cindy Shin, the founder and CEO of KACIE Strategies, and public relations chair for the Korean Food Global Association.

Often dressed in traditional clothing, or Hanbok, Koreans wish their elders a happy new year while saying “saehae bok mani badeuseyo.” This translates into “please receive a lot of good fortune for the New Year.” 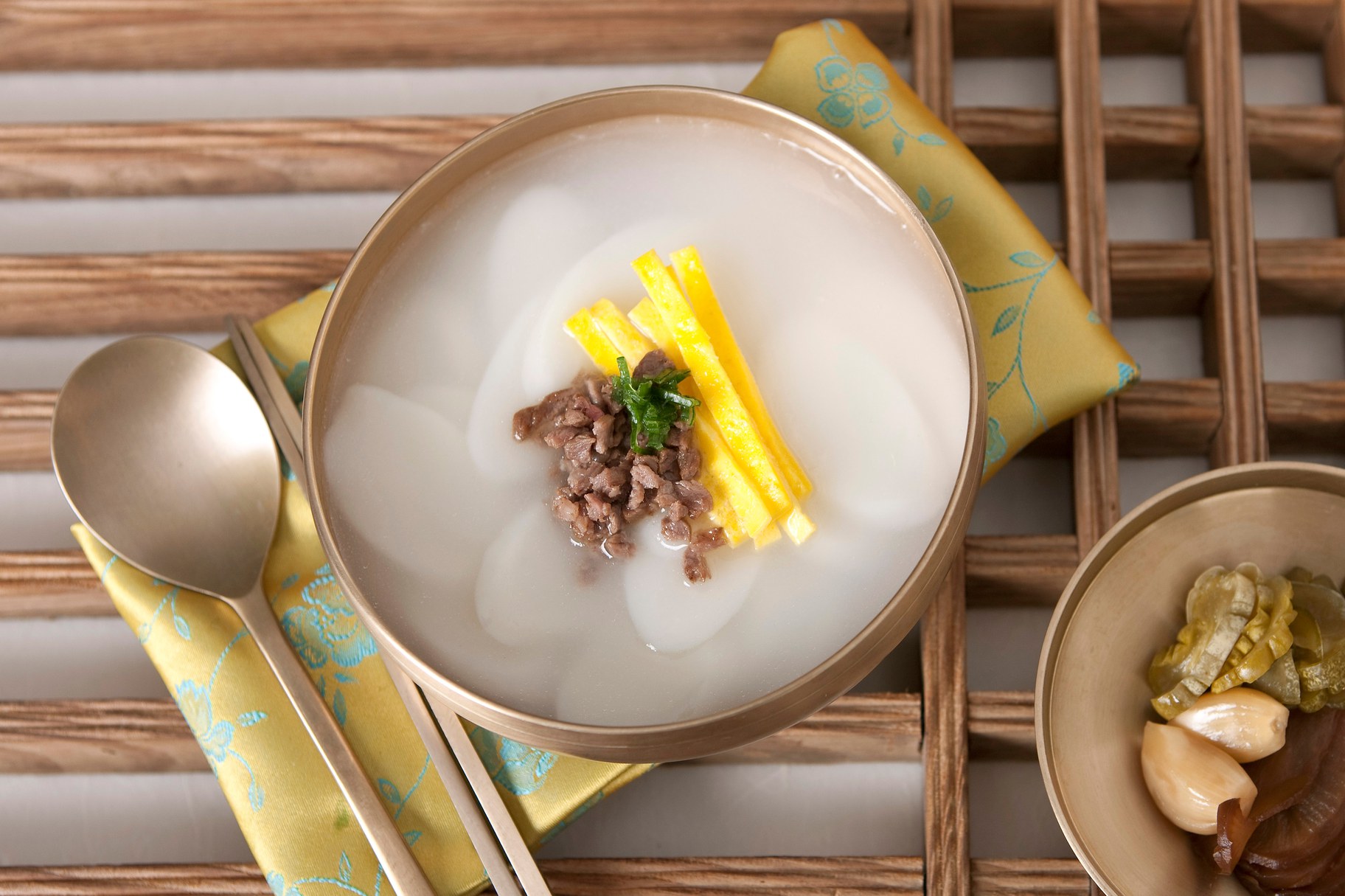 “Tteokguk” is a traditional Korean food that is customarily eaten on New Year’s Day. Photo by Shutterstock.

“The white color represents purity and a clean start to the new year,” Shin says.

“Shōgatsu” is the most important holiday for the Japanese. It’s meant to ring in an auspicious next 12 months, and people are encouraged to be joyful and stress-free. 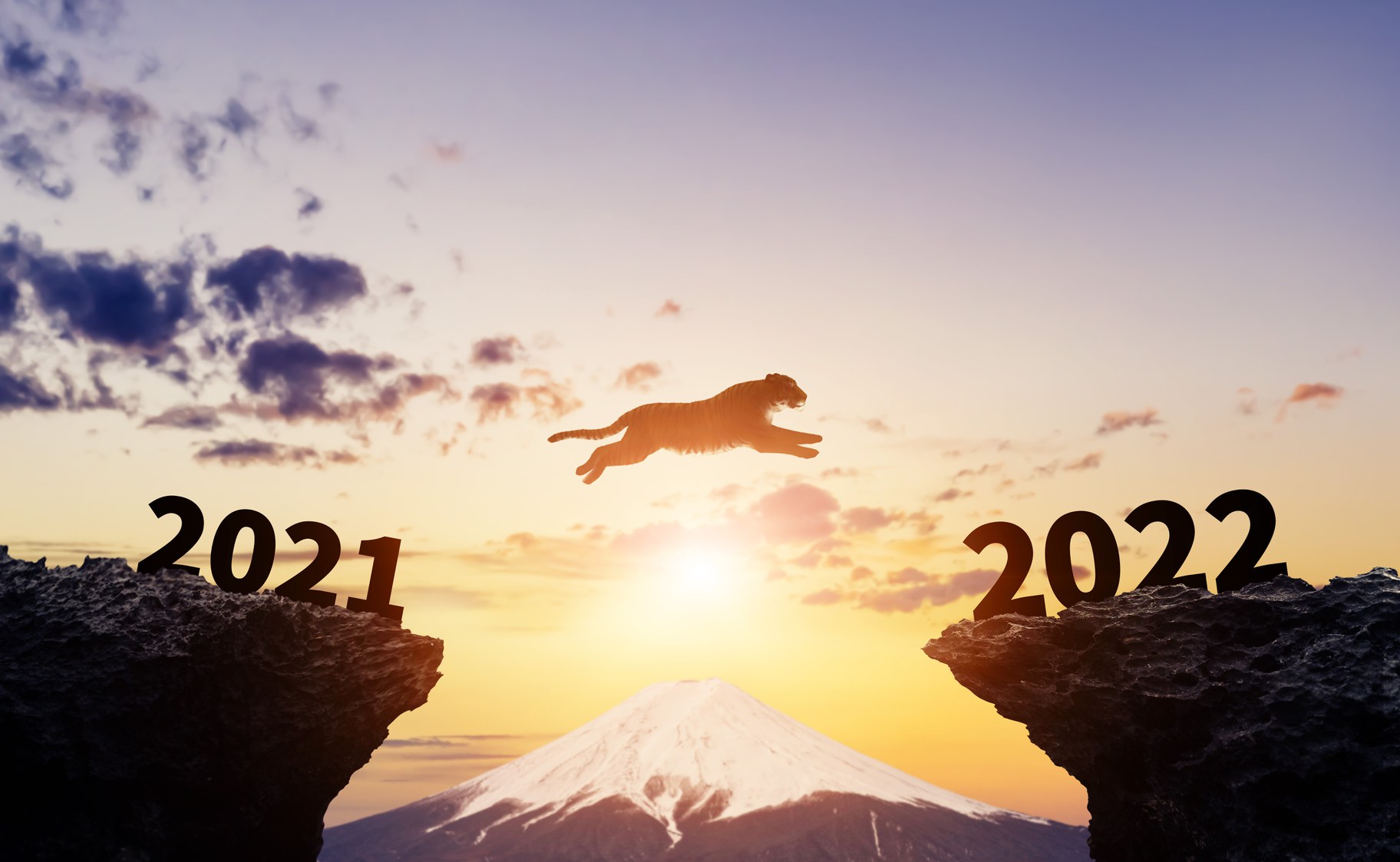 One of the unique Japanese New Year’s traditions is watching the first sunrise of the year. Photo by Shutterstock.

One of the common traditions is watching the first sunrise of the year or “Hatsuhinode.” The sight is supposed to bring good luck.

The most popular Japanese food is “Toshikoshi Soba,” a savory buckwheat noodle dish, which is typically enjoyed on January 31. 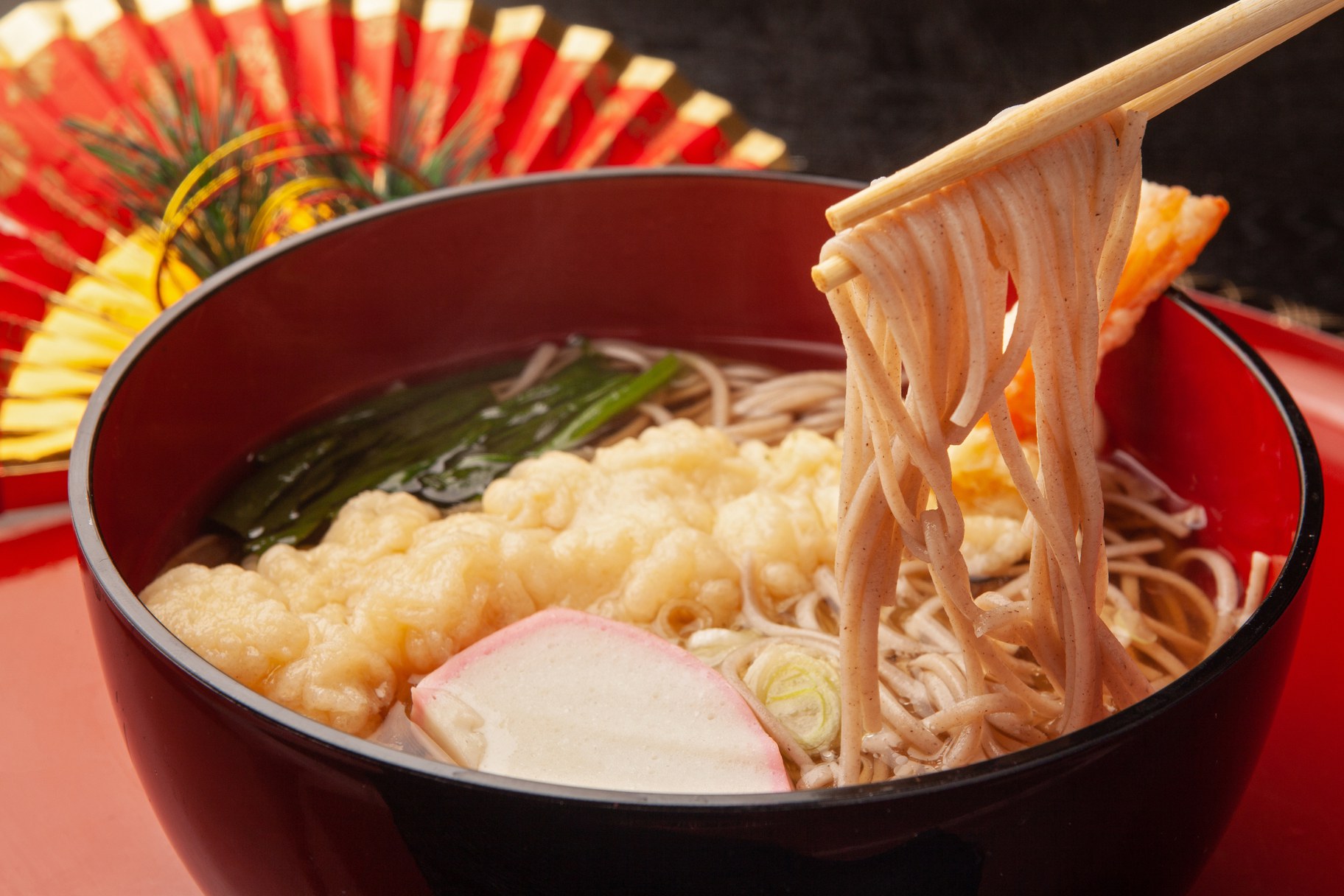 Japanese families enjoy “Toshikoshi Soba” on New Year’s Eve as they attempt to start fresh and leave behind old hardships. Photo by Shutterstock.

The long soba noodles represent longevity. Cutting noodles also signifies cutting off negativity and hardships from the prior year.

One thing in common

The Chinese, Vietnamese, Korean and Japanese cultures all give money to younger people or children in an envelope to wish them luck and fortune. 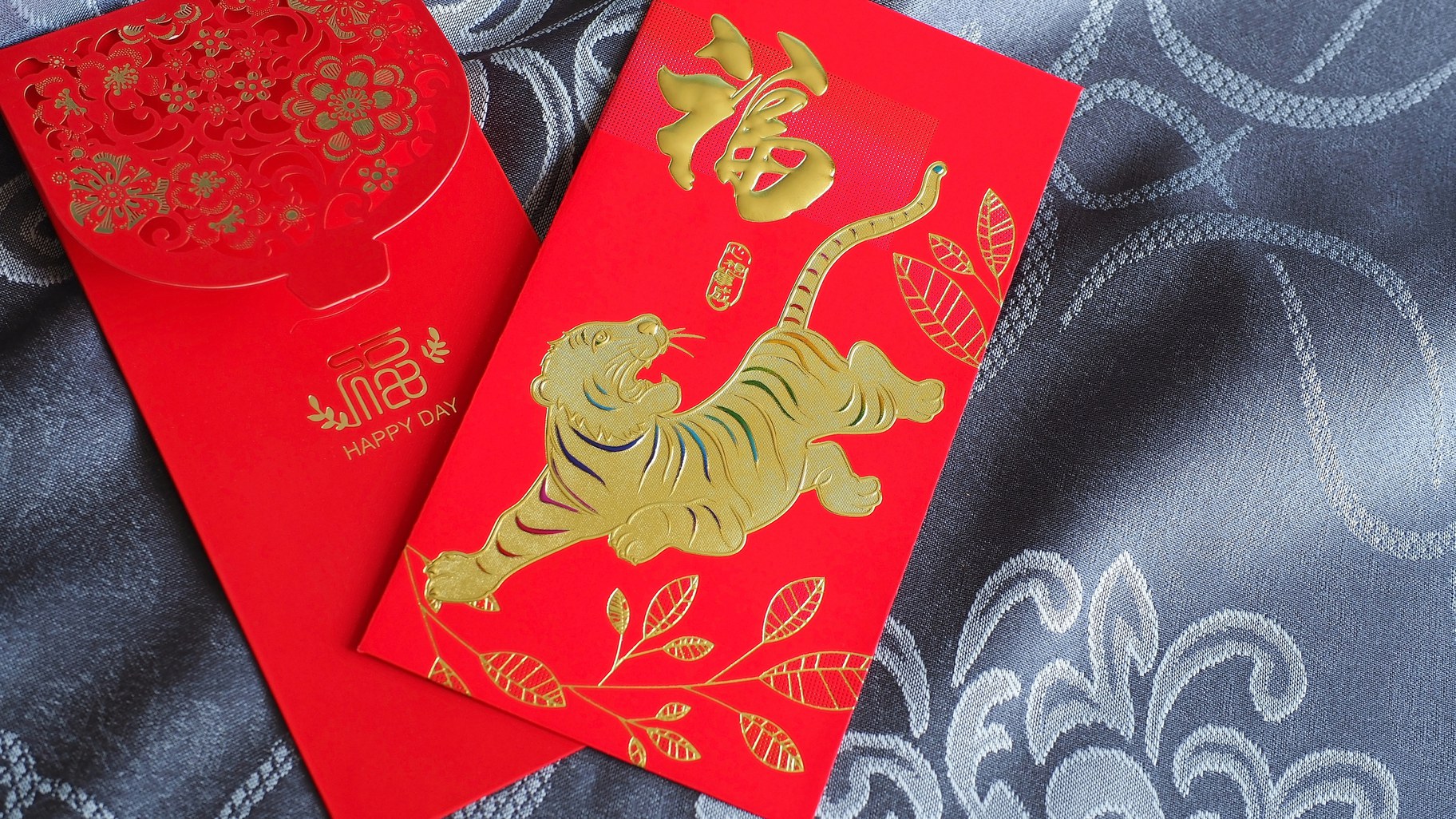 Asian cultures traditionally give money in an envelope to younger people to wish them luck and fortune. Photo by Shutterstock.