Hundreds of protestors gathered in the heart of downtown Bakersfield on the evening of May 29, just days after George Floyd was killed in Minneapolis and nationwide demonstrations began.
Photo by Ana Cornejo.

When footage of George Floyd’s killing sent a shockwave across the nation this spring, it touched cities big and small. In rural towns throughout the U.S., people took to the streets united by a single phrase: Black Lives Matter.

They rallied, denounced police brutality, and called for systemic changes. And in some cases, they raised their voices in places where locals were more accustomed to keeping quiet about racism.

Chants of “say her name” — referring to the police killing of Breonna Taylor  — resounded in large urban cities. But the rallying call could be heard outside the police headquarters, under the hot Central Valley sun in the streets of downtown Bakersfield.

Lifelong Bakersfield resident Carrington Prichett was at a recent rally for racial justice in the heart of that city following a Kentucky grand jury’s decision not to charge the three police officers involved in shooting Taylor for her death.

Prichett says President Trump’s inflammatory rhetoric and frequent dog whistles over the last four years have tacitly extended a pass for racism. It’s something the 22-year-old Black man says he perceives around Bakersfield, even when doing something as mundane as grocery shopping.

“I see a lot of MAGA hats and shirts, and when I – I just happen to glance at them they give me a look of hatred,” Prichett says. “So it’s definitely an emboldened—a silent racism, if you will.”

Standing among the crowd of demonstrators outside police headquarters at the intersection of H Street and Truxtun Avenue, Prichet shares an all too common reflection.

“I told my friend a few days ago, that I get a sense of nervousness when a police officer drives beside me or I’m in the same presence as one in Bakersfield – or anywhere, for that matter,” he says.

“I can honestly say in my 40-plus years in law enforcement, I’ve never seen an officer make a car stop based on race, color,” the sheriff says. 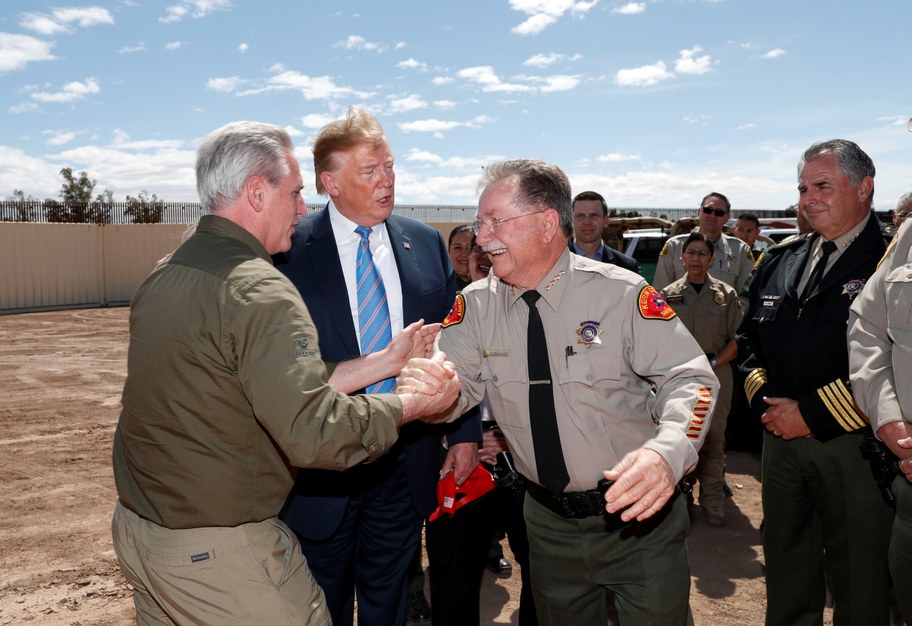 U.S. House Minority Leader Kevin McCarthy (R-CA) greets Kern County Sheriff Donny Youngblood as he and President Donald Trump visit the U.S.-Mexico border in Calexico, California in 2019. Youngblood, who describes himself as the product of a conservative home, was first elected to the post of Kern County Sheriff in 2006. Photo by Kevin Lamarqu/Reuters.

Youngblood has a reputation for talking tough when it comes to law and order and immigration. He’s been with the Kern County Sheriff’s Office since 1972 and has watched the county grow from around 330,000 to just over 900,000 today. Latinos are the majority of the population in Kern, while whites comprise about 32% and Black residents account for 6%.

Youngblood unequivocally calls what happened to George Floyd unacceptable to him personally and professionally. However, he takes issue with the notion of systemic racism tainting policing.

“This term ‘systemic racism’ is being thrown around a lot, and people are jumping on the bandwagon,” says Youngblood. “But, in law enforcement, I can tell you you may have racists – we have racists in our society, we know that – but, quite frankly, it’s not a crime to be a racist, if that’s what you choose to be. It’s your actions that concern us. If you have racist tendencies and you act out in a racist manner, we don’t need you. We need officers that treat everyone exactly the same.”

State officials have not always agreed with Youngblood. In late 2016, under then California Attorney General Kamala Harris, the state opened an investigation into practices at both the Kern County Sheriff’s Office and the Bakersfield Police Department. At the time, Harris said the state’s DOJ was looking to see if the two organizations had engaged in, “a pattern or practice of excessive force or other civil rights violations.” Harris’ office said it launched the investigation based on complaints from individuals and groups, as well as media reports regarding high numbers of fatal shootings by officers. In June, current California Attorney General Xavier Becerra said the inquiries remained active.

“I’ve told the Department of Justice, I’ve told the FBI, ‘If you find people in my department that are doing—conducting criminal behavior, indict them,’” Youngblood says with passion. “‘Or give it to me; I will send it to the district attorney and get a criminal complaint.’ I support that 100%, and I think most of the officers do as well.”

To date, there have been no indictments or charges filed in relation to the state’s investigation.

In 2017, the year after Harris launched that investigation, the ACLU published a detailed report on instances of excessive force and misconduct by both the sheriff’s office and Bakersfield PD. Among the cases it highlighted was that of David Silva, a Latino man whose 2013 death drew international attention.

Silva was reportedly intoxicated and asleep outside a hospital when deputies woke him. After an altercation, a total of nine law enforcement officers subdued him. They hit him with batons, had a police dog bite him, and hogtied him. Before a civil lawsuit claiming wrongful death and excessive force went to trial, Silva’s family settled with Kern County for $3.4 million.

Some reforms have made their way into local law enforcement; Kern deputies and Bakersfield police now wear body cams, but the pace of change with policing pales in comparison to how quickly attitudes shifted regarding Black Lives Matter. Just a few days after George Floyd was killed in Minneapolis, hundreds of protestors flooded the streets of Bakersfield. 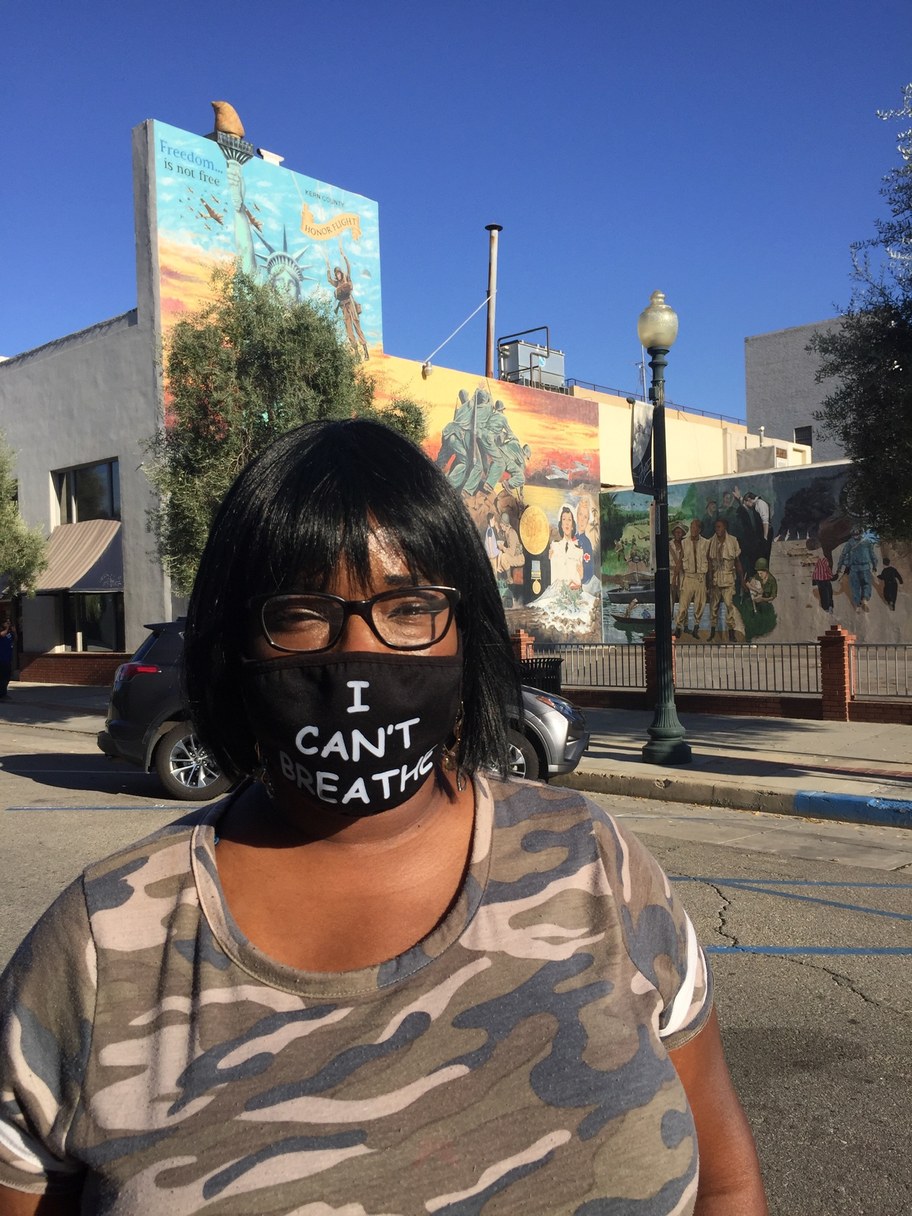 Lifelong Bakersfield resident Michele Holiwell has been demonstrating in the city for more than 10 years. Founded in June, her group BLM Bako hosted regular protests throughout the summer. Holiwell has also made a point of attending demonstrations elsewhere, including outside the Capitol in Sacramento. Photo by Matt Guilhem/KCRW.

“It was actually quite warming to see the amount of people that were actually out and willing to protest,” says Michele Holiwell.

Holiwell is from Bakersfield, is a mom, and is a cofounder of the group BLM Bako, a local chapter of Black Lives Matter.

She says she decided to truly get involved following that first, organic demonstration in the days after Floyd’s death.

“The Black Lives Matter protests that we continue to carry the torch for is because of the Black lives that are predominantly being murdered, being abused, being charged for crimes they have not committed,” Holiwell says.

She’s gotten more than a few jeers for marching. She also says when a small faction of demonstrators started cursing at people and defacing property, she felt a need to step in.

“It was really a call to action,” says Holiwell. “This is my city. Whether they want me here or not, this is my city, and we don’t have much here, so what we do have, guess what, I want to take care of it. I want it to be here for my kids, and I pray to God it’s here for my grandkids. But, if we destroy what’s ours, what are we going to do next?” 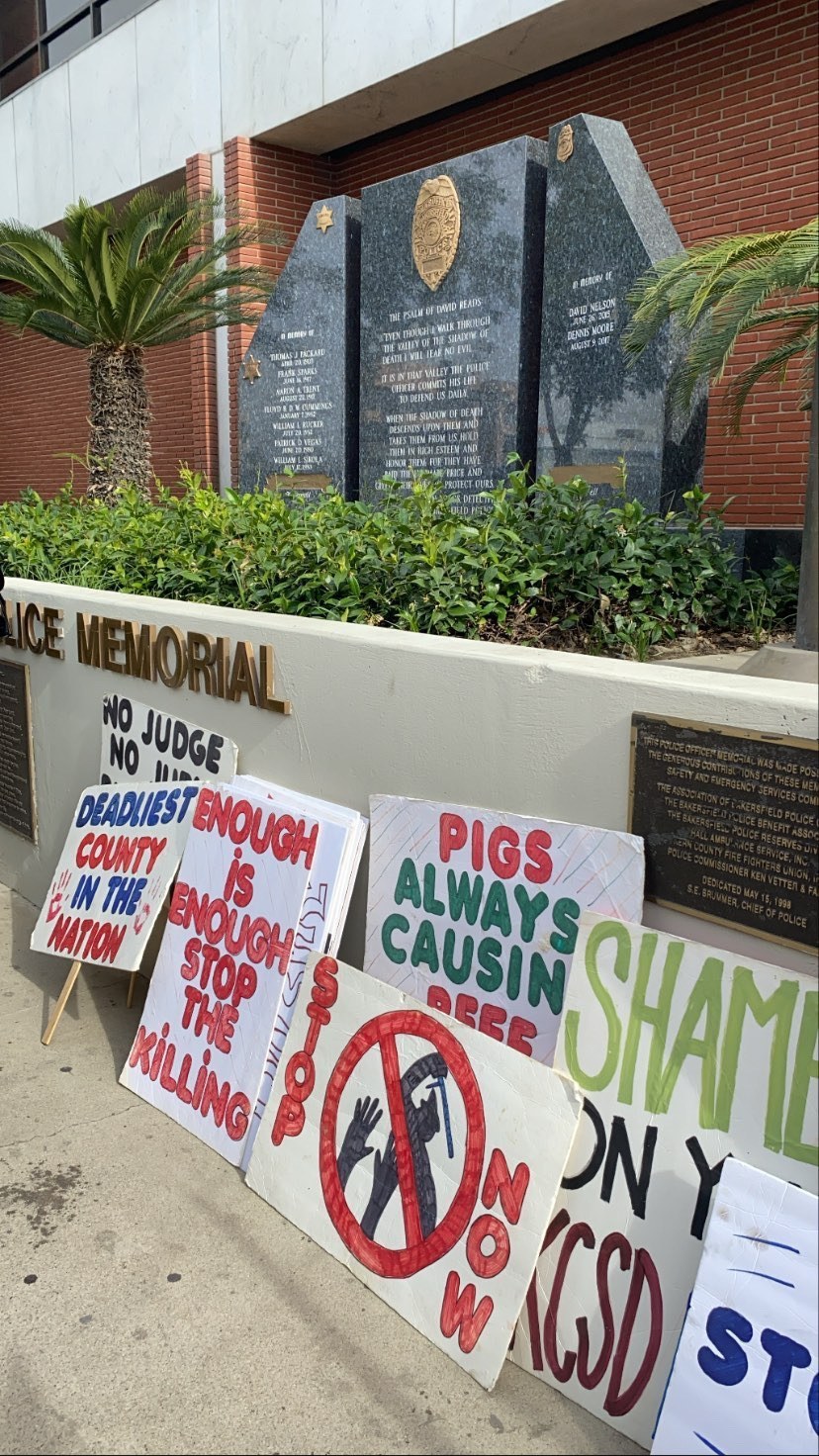 A handful of signs from the May 29 protest in Bakersfield lean against the memorial for fallen officers outside police headquarters in the heart of the city. Photo: Ana Cornejo.

As demonstrations sprung up in communities around the nation, BLM Bako organized a rally not in the heart of downtown Bakersfield, but in an affluent, suburban part of town called Rosedale. Holiwell says it was met with resistance, and not just from organized hate groups she describes as Proud Boys. She says parents and children were heckling protestors.

“People that were driving by, a bunch of mothers with young small children – not in seatbelts – flipping us off, cursing at us – screaming profanities and obscenities,” Holiwell recalls. “It had to be at least 30 different cars and at least ten different kids.”

According to Holiwell, expressing support for the movements around racial justice and police reform can have consequences in Kern County.

Her group and others in Kern saw a flurry of activity early in the summer. But unlike some other places, there hasn’t been the same momentum around local reform in this conservative and police-friendly area.

In LA, advocates for defunding the police have earned the ear of city officials. The LAPD’s budget took a $150 million hit. The City Council voted to put civilian mental health workers in charge of some 911 calls. And LA’s sheriff is a subject of constant protest.

In Bakersfield, the “defund the police” movement hasn’t led to any concrete policy changes. Still, activists continue to turn out when big developments occur, like the Breonna Taylor decision.

Holiwell remains passionate and has used the moment we’re living through to show her young daughter the power of standing up and being heard.

“I want my kids to know how it is in Kern County,” Holiwell says calmly with seriousness. “I want them to fully understand everything that’s going on. I want to be very transparent with them. I don’t want them to go through life as I did, sheltered, and thinking, ‘Oh it’s all—everything’s okay.’ And here lately, it’s like this just really blew my mind to grasp that slavery wasn’t long before I got here. Freedom wasn’t long before I got here. So, why wouldn’t I pick up the baton for social justice and to become better as a community? To become better as a city? To become better as a whole? Why wouldn’t I give my effort? I don’t want my kids to feel like I feel as a 42-year-old woman. I want them to know better.”

The demonstrator at the downtown Bakersfield rally for Breonna Taylor, Carrington Prichett, is 20 years younger than Michele Holiwell. Prichett was just 16-years-old when Michael Brown was killed at the hands of police and unrest swept through Ferguson, Missouri in the summer of 2014. Now, at age 22, the college student is among those participating in the nationwide struggle for racial justice. Young and hungry for change, Prichett’s reasons for taking to the streets sound simple, but in 2020 his hopes are what’s driving an unfolding revolution.

“I hope that we can find the solution to what America has been fighting for for many, many years, and to also fight for love and also to fight for justice for people of color,” he says.

Special thanks to Madi Bolanos with KVPR.