More sharks are in SoCal this summer. Tips on staying safe when you go out to the water A Boy Scout was bitten by a shark after kayaking near Catalina Island a few weeks ago, according to lifeguards with the LA County Fire Department. With temperatures hitting record-breaking levels, more people are flocking to local beaches to beat the heat. So should swimmers, surfers, kayakers and anyone else jumping into the ocean be worried about a shark attack this summer?

KCRW: What kind of sharks do we see in Southern California around this time of year?

Chris Lowe: “We'll have leopard sharks that will aggregate in shallow water and … they have those beautiful markings on them. We'll see gray smooth-hounds. Fishermen will catch small thresher sharks along the coast. But it's really the juvenile white sharks that are using Southern California beaches in greater frequency. And we think that's a sign that the population is recovering and coming back.” 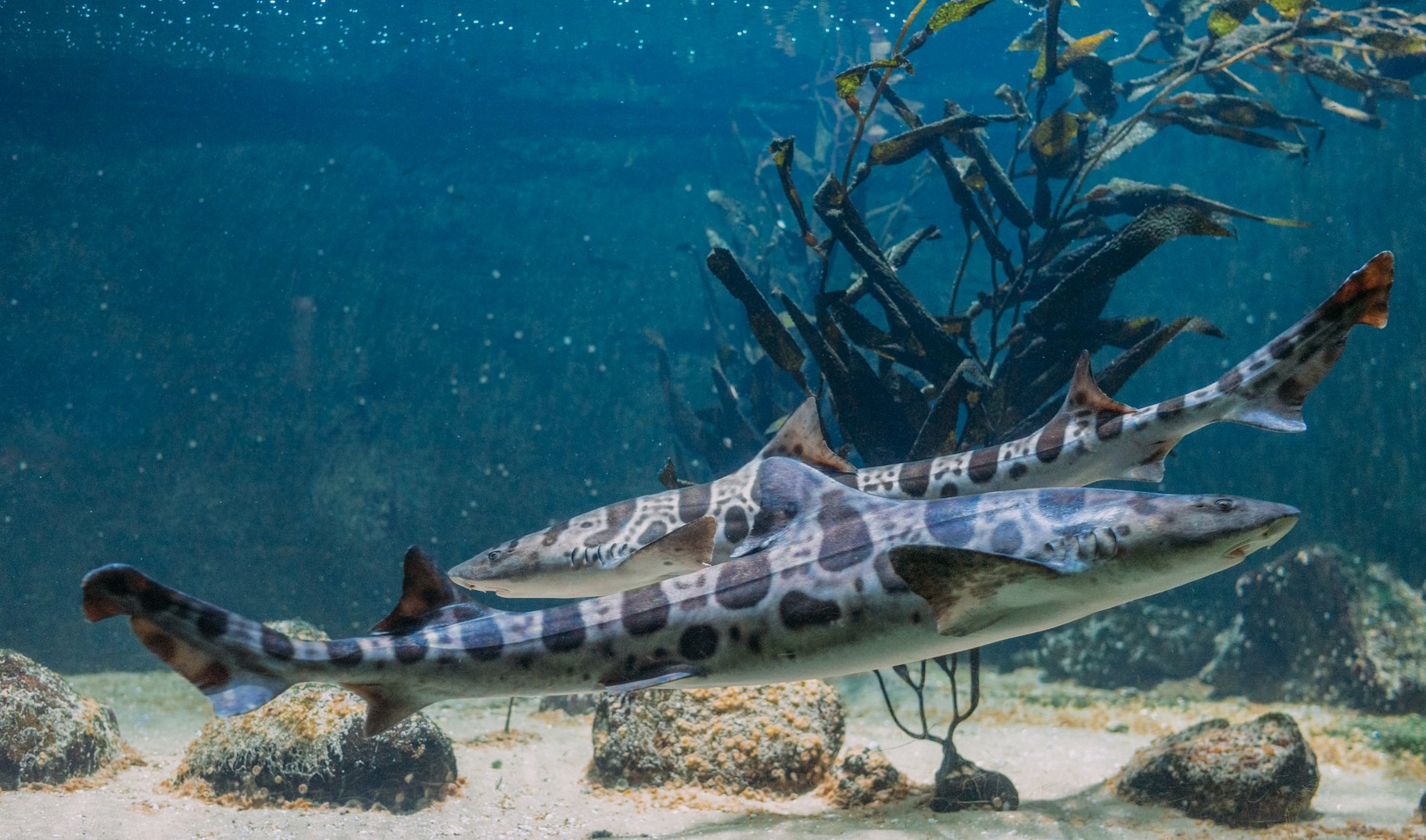 Leopard sharks, with their unique markings, aggregate in shallow water in Southern California in the summer, says Chris Lowe. Photo by  Nine_Tomorrows/Shutterstock.

Why is Southern California so popular for sharks?

As ocean temperatures continue to rise, will we start to see more sharks off our coasts?

“That's one that scientists are trying to figure out. So we know that some species are going to benefit from climate change, at least in our area. And then there may be others that aren't.

The great thing about sharks is that they're highly mobile. If they don't like conditions where they're out, they can move somewhere else. So we expect sharks to start marching north, in our neck of the woods. And that's because as the water gets warmer, further north, that opens up habitat for species that may have not used those waters before.

So what we always tell people is, ‘Look, just because you've never seen a white shark up your beach, doesn't mean they may not start showing up now because of climate change.” 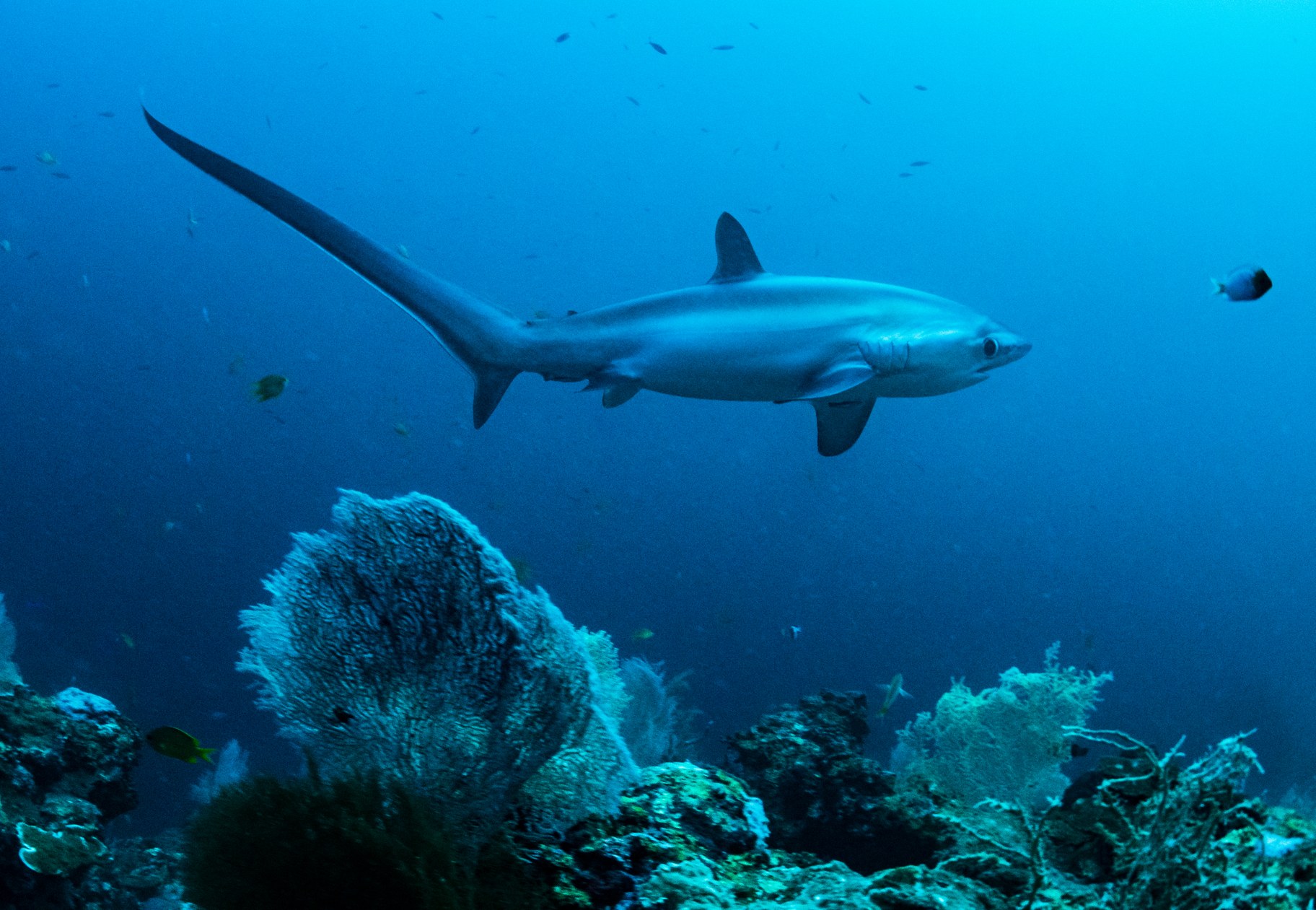 Fishermen tend to catch thresher sharks along the coast in the summer, says Chris Lowe. Photo by Shane Gross/Shutterstock.

People often think of sharks as intimidating. How accurate is that reputation?

“It's a complete opposite image of what we see when we look at and study these animals in their natural environment. … Most of the time, we see the sharks just cruising back and forth lazily along a beach — every once in a while snacking on a stingray. But by and large, they're just using these habitats kind of the same way we do — probably to hang out, feed, to recreate and to catch some Zs when they can.

… What we've seen so far is that if we leave the sharks alone, by and large, they leave us alone.”

How can people best share the ocean with sharks?

… Swim together, surf together, hang out together. And if by chance, you are one of the rare few that does get bitten, you'll always have somebody there to help you.”

“Avoid places where the water is really murky, or there may be dead animals floating around. Like a dead seal or sea lion or a whale.  Obviously, that could attract sharks to that area, and you don’t want to be mistaken for a floating piece of carrion.”

“If you see a shark, we always tell people, ‘Keep your eye on the shark.’ Track it. If you're on your surfboard, turn your surfboard towards the shark, let the animal know you see it. And quite often, when that happens … the sharks get bored and take off.” 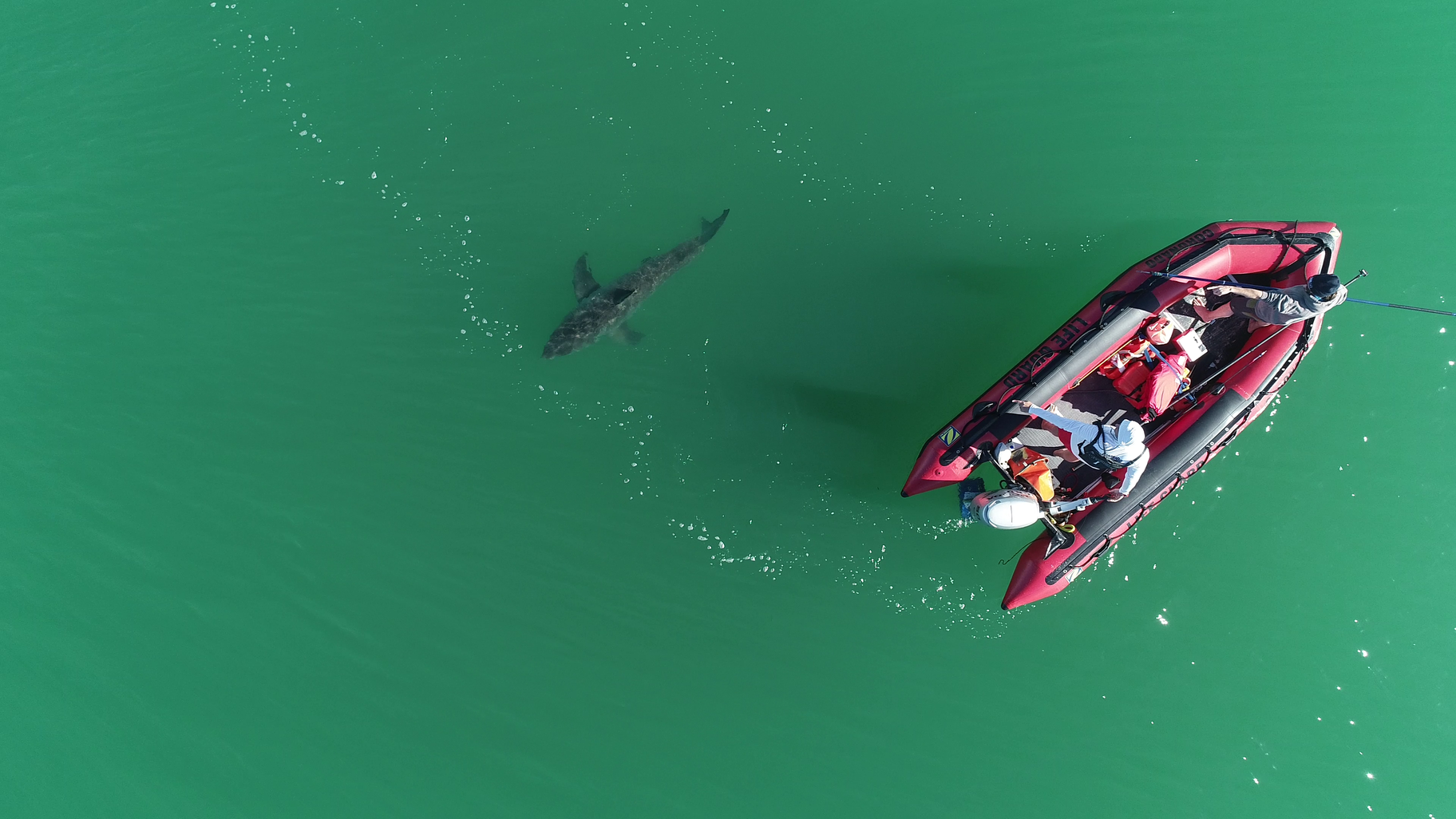 A shark is underwater off the coast of Southern California as a boat floats nearby. Photo by CSULB Shark Lab.

Can we expect fishing regulations to change as more sharks are in SoCal waters?

“With the rise in shark numbers, particularly juvenile white sharks, and then using Southern California beaches as their nursery, now we have more fishers than ever fishing off our beaches. And they're using new, modern tackle that's designed to be incredibly strong.

So 20 or 30 years ago, this wasn't an issue, we just didn't have sharks, and we didn't have this kind of fishing gear. Now that we do, we're probably going to have to start to change fishing regulations before somebody gets hurt or killed.

In addition, we find that some of these fishers are actually chumming these areas. And it's not illegal to chum in California waters. But it shouldn’t be done along public beaches because there are kids swimming and surfing there. And we don't want to attract larger sharks that could pose a risk to those people in the water. So as a result with this changing ocean, we're probably going to have to develop new regulations to keep everybody safe.”