L.A. teachers last went on strike in May of 1989, and what L.A. Unified teachers demanded back then isn’t that different from what they’re demanding 30 years later. 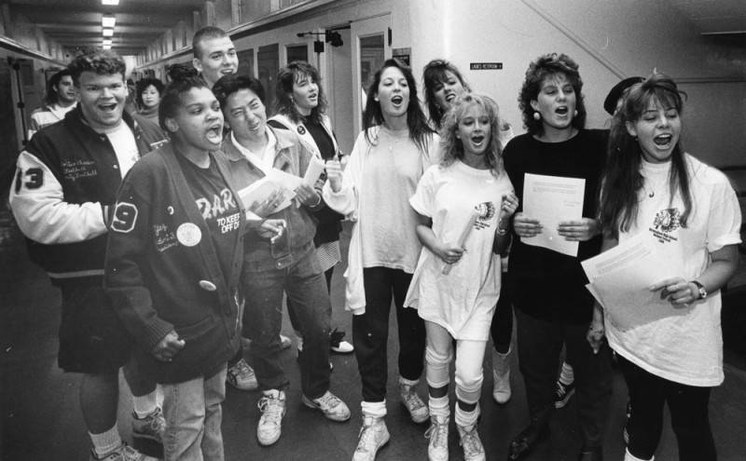 Students chant loudly outside the office of School Superintendent Leonard Britton about the teachers' strike. May 12, 1989. Photo courtesy of Los Angeles Public Library

In 1989, teachers also wanted a greater say in school management, including such issues as curriculum development, teaching methods and discipline.

In 2019, UTLA is demanding teachers have a greater say in the frequency of testing and where charter schools are placed. The union also wants L.A. Unified to hire a lot more counselors, nurses and other campus support staff.

And like today, the relationship between the teachers union and the school district was terrible in 1989, with each side accusing the other of political posturing and negotiating in bad faith.

“It’s been a waste of time," former UTLA president Wayne Johnson said at the time. “They have been very dishonest in all their proposals. They are not acceptable. They are totally unacceptable.”

Los Angeles School Board president Roberta Weintraub shot back that the union was power hungry and the strike was harming L.A.’s schoolchildren.

“I feel very very sorry and sad,” said Weintraub. “And I sincerely hope that many teachers understand that we have done our personal best, and we ask them to return to their classrooms tomorrow morning.”

But teachers stayed on the picket lines and conditions at schools quickly got worse.

Newspaper accounts of the time describe confusion on campuses with skeleton staffs of district administrators and substitute teachers not knowing what to do. Many students were herded into auditoriums to watch cartoons instead of learning.

“This isn’t teaching, this is babysitting,” complained one temporary instructor at the time.

Jamie Todd Rubin, now a writer and computer programmer in Virginia, was a junior at Reseda High School. After spending the first day of the strike at the school library with nothing to do, Rubin and his friends decided it was better to stay out of class.

“We would meet up at school and go to friends houses or the beach,” recalls Rubin. “It was a kind of idyllic period, which is why I think it sticks in my mind so much.”

But on the strike lines, tensions were growing between strikers and strike-breakers.

Years later in an interview for an oral history project, union president Wayne Johnson remembered ugly confrontations outside of schools and ice picks being stuck into the tires of some strike-breakers’ cars despite pleas from union officials to keep the strike peaceful

“We kept telling people, don’t do this because we can’t protect you,” said Johnson. “If you do that, you’re on your own.”

And matters got worse when 11 striking teachers and union officials were arrested for trespassing at school district headquarters. Television camera crews recorded images of teachers, nearly all of whom were middle aged women, being handcuffed.

After nine days of striking, an agreement between the teachers union and the school district was finally hammered out, but the results were mixed.

In the short term, teachers got much of what they wanted. That included more control over school governance and a bit increase in salaries. But as LAUSD deficits grew, the higher salaries became controversial. Three years after the strike, teachers accepted a 10 percent pay cut.

What questions do you have about the strike?