Cannabis is now 5th largest crop from California, ahead of tomatoes and wheat While California’s cannabis industry continues to grow after the legalization in 2016, only a fraction of the weed products is coming from legal channels, according to Leafly Senior Editor David Downs. “The crazy thing is four out of five pounds grown in the state are still growing in the illicit market.” Photo courtesy of David Downs/Leafly.

American farmers are seeing green. The once-budding cannabis industry is now available in 37 states for medicinal purposes while adults can walk into a licensed store and buy recreational weed in 11 states.

Cannabis is America’s fastest-growing industry, but how much cash does all the cush translate to?

KCRW: Where does cannabis stand among other harvests nationally?

What's telling is that in a lot of these states, they haven't had legalization for very long. Illinois cannabis is the number three cash crop, and people have been able to shop in stores for just over a year.

We think California cannabis farmers on the legal side are producing about 514 metric tons of the crop each year, and the value of that cannabis production in dollars is $1.66 billion.

That ranks cannabis as number five among state crops. Number four is strawberries at $2 billion, and number six is tomatoes at $1.19 billion.

That's a massive market, and the crazy thing is four out of five pounds grown in the state are still growing in the illicit market.

The 514 metric tons amount for the adult-use market is likely just a fraction of the actual amount California is growing. California remains the number one domestic producer of cannabis since the 80s.

Did you factor in how much the illicit market would amount to if it was factored in with the legal market in California?

We know it's somewhere between three and five times bigger. We know that because we have pretty good solid numbers on national demand and state demand versus what's .... [reportedly] being produced in the legal market.

We think California on the legal side is maybe serving 10% of the state's demand. That's in contrast to Colorado, which is five years ahead of us on the legalization curve. Over 80% of Colorado demand is being served by legal growers there.

Leafly and Whitney Economics tallied data from 13,222 licensed pot farms in the 11 states that have legal adult use stores. Shouldn’t the federal government be doing that?

We pioneered this kind of approach with the Leafly jobs report when we saw that the Bureau of Labor and Statistics wasn't counting cannabis jobs in America.

It's a big gap and a bias. That's a relic of 100 years of cannabis prohibition. It is the kind of information that you need as a voter or a policymaker or a lawmaker with regard to advancing or changing cannabis laws in America.

How much weed did American farms harvest last year?

They're just mind-boggling numbers. In those 11 U.S. states that are active in terms of retail sales, we counted 2,192 metric tons of cannabis cultivated per year.

What does that translate to in terms of dollars?

The annual production of cannabis in the United States in the adult-use states translates to $6.2 billion a year. That's the wholesale revenue that farmers are receiving at the farm gate for selling their crop to distributors or retailers.

That makes cannabis the fifth largest crop in America  — ahead of wheat but behind cotton. 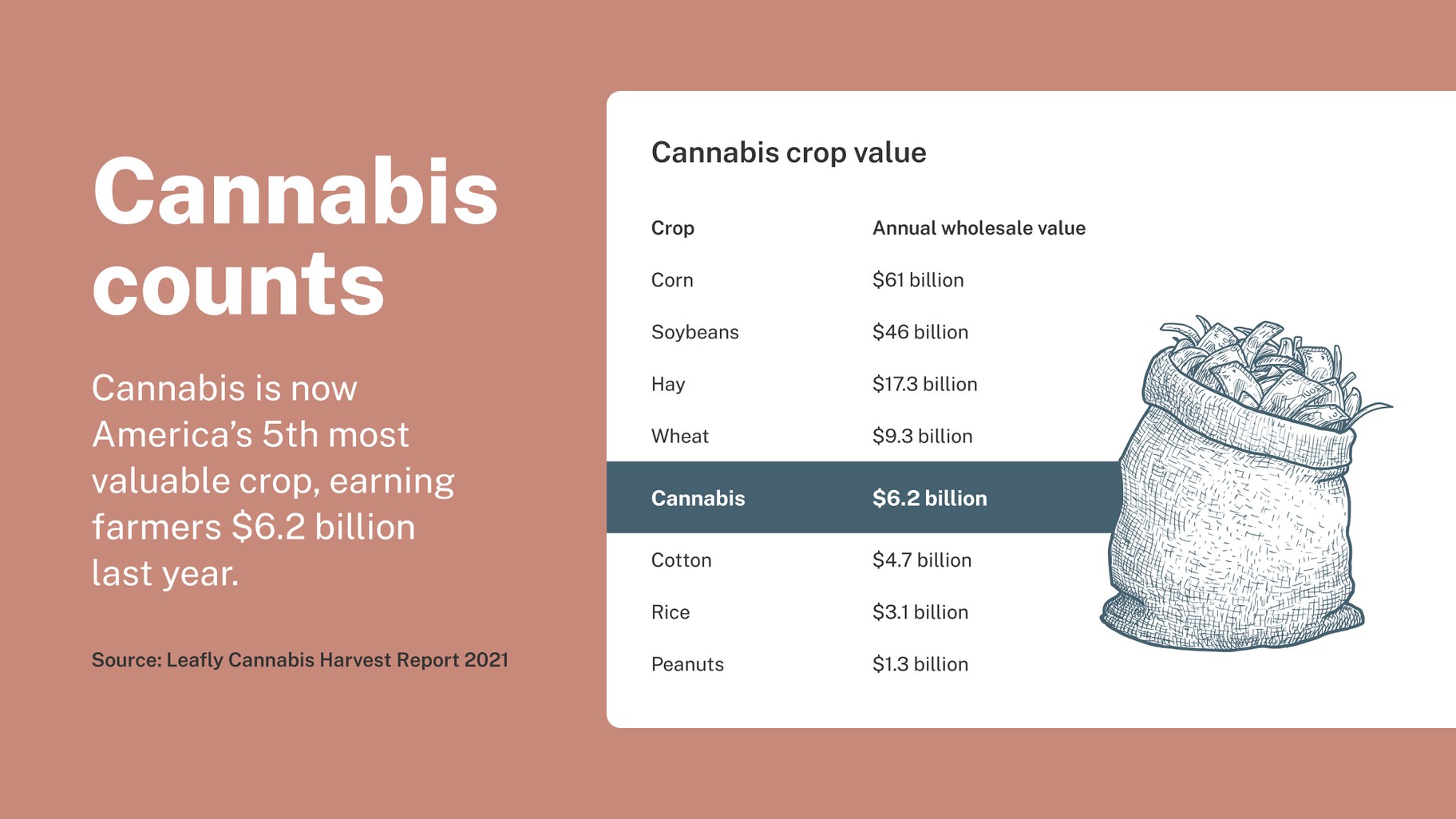 There are currently no comprehensive jobs reports that are compiled on the federal level, according to Leafly Senior Editor David Downs. Photo courtesy of Leafly/Whitney Economics.

With the 2021 crop hitting store shelves, what are the best strains this year?

As we go into the harvest season ... all the flowers are coming out of the field, and now's the time to sort of understand what to shop for in terms of what's new on the shelves.

I don't think anyone's going to be surprised that growers grew a lot of the strain called Ice Cream Cake. It mixes Wedding Cake and Gelato, which [are] two very popular strains.

And there's a variety of Ice Cream Cake like Purple Velvet Cake or Oreo Cake or Rosé Cake. You're gonna want to look for those cakes for your afternoon and evening smoke.

America [has] really spoken, and it wants that after-work type of variety, as opposed to a newer strain on the block like Hella Jelly. It is a modern sativa from Humboldt Seed Company that really broke out this year in the fields. So we're about to see a bumper crop of Hella Jelly come into stores. That strain is very sweet and fruity with daytime active effects — that if you try to enjoy it at night, you  might be up at 11:30 p.m. cleaning your kitchen baseboards.