Why is it so expensive to build homeless housing? The $1.2 billion raised by the HHH bond measure is supposed to create 10,000 units of homeless housing in 10 years, or a thousand units a year. That would be a big step forward in housing the homeless in Los Angeles, a city where there are 31,000 people who are homeless according to the most recent homeless count conducted by the Los Angeles Homeless Services Authority. But even as construction begins, there are big and growing concerns about the speed and mushrooming costs of housing projects funded through HHH, problems that could threaten the ambitious housing goals of the program. 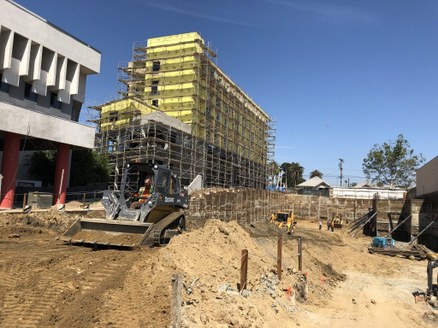 The PATH Ventures supportive housing project under construction in East Hollywood.
Called PATH Metro Villas II, it's the first HHH project to break ground and should be
finished by the end of 2019. (Photo by Saul Gonzalez)