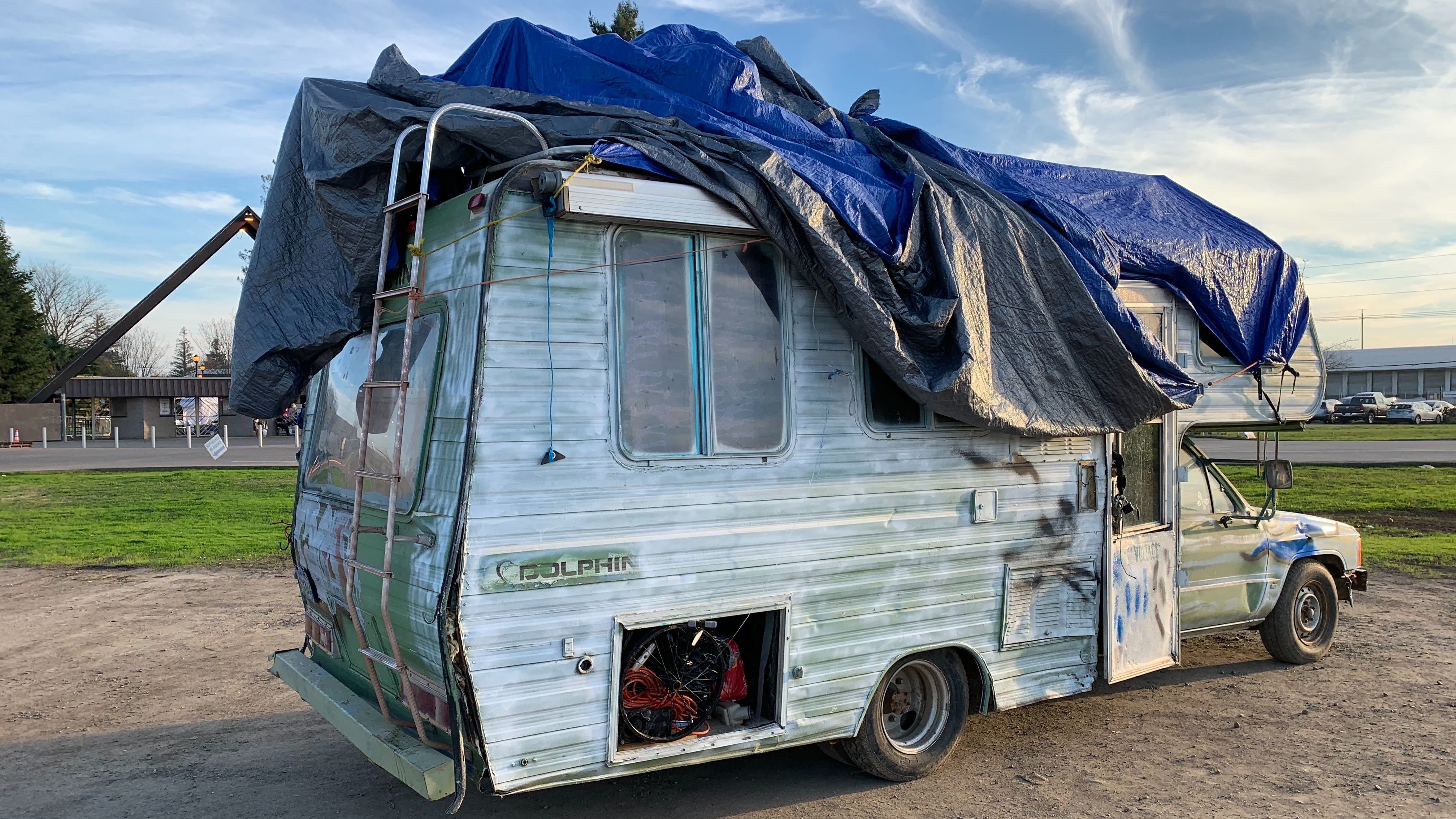 An abandoned RV at the last remaining Red Cross shelter providing housing for victims of the Camp Fire in California. Photo by Kirk Siegler - NPR

For survivors of last fall's deadly Camp Fire that destroyed nearly all of Paradise, Calif., there is a deadline looming: the last shelter will soon close in nearby Chico. Disaster relief officials are racing to find temporary shelter or housing for dozens of people at the Red Cross shelter now facing homelessness.

Many of the folks who are left at the shelter at the Chico fairgrounds were already living on the economic margins when the Camp Fire destroyed whole towns and rural mountain neighborhoods.

Nicholas Soto, one victim of the fire, has been moving from shelter to shelter. Since early December, he and his wife have parked their RV along a fence crammed with other campers abutting a Chevron station.

"You get tired of being pushed from one place to another, told you can't be here, you can't be there, it's a little tiring," said Soto. "We fled the fire only to jump into hell."

Soto suffers from chronic lung disease and diabetes. At almost 70, with long salt and pepper hair pulled back in a ponytail, he often has to use a wheelchair.

The Sotos also rescue dogs. With four dogs and two cats, they're crammed inside the camper. It weighs heavily on Soto.

We fled the fire only to jump into hell. Nicholas Soto

The shelter's closure deadline isn't completely set in stone. If it were, local officials worry this would exacerbate an already bad homelessness crisis in Chico.

Earlier this week, Butte County received a million-dollar grant that will go to help those who remain here find new housing – likely out of state. There was already a housing shortage in this rural area before 14,000 homes burned overnight. Even before the Camp Fire, vacancy rates fell between 1 and 2 percent most of the time.

Aside from the aid Red Cross is giving to victims, FEMA has processed about 26,000 applications for California fire victims since last November, the bulk coming from Butte County and the Camp Fire, including Soto. FEMA extended its deadline to apply for aid to Feb. 15.

With the aid he'd get from FEMA, Soto hopes to leave the shelter and drive up to Oregon.

"There's worse things that could have happened to us," said Soto. "We got our lives and we got our fur babies."

Hafsa Quraishi adapted this story for the Web.

END_OF_DOCUMENT_TOKEN_TO_BE_REPLACED
KCRW's Power in Numbers Drive: Today, your dollars will be doubled up to $25,000, thanks to the generosity of Paul & Renee Haas.
Give Now
Give Now