From shoplifting to illicit affairs, ‘The Big Hurt’ is about a woman’s yearning for connection In “The Big Hurt,” author Erika Schickel bares all about her affairs with unobtainable men, her experience at a hippie East Coast boarding school, and the familial abandonment she’s experienced. Photo by Anne Fishbein.

When Erika Schickel sat down to write a book about her coming-of-age story, she thought it was a funny one. As a wild child of somewhat famous Manhattan writers, she was shipped off to a hippie East Coast boarding school, where she smoked weed, hooked up with cute boys, and got kicked out a few weeks before graduation for sleeping with a teacher.

But the more she tried to write that story, the more she realized it wasn’t funny at all. In reality, it was the story of a very hurt girl, abandoned by the adults in her life, and left to navigate her own pain.

She also realized that the same pain was at play nearly 30 years later when she blew up her marriage and family for an affair with a famous LA crime novelist.

Now she’s ultimately out with a memoir called “The Big Hurt.”

Boarding school and romance with a teacher

When Schickel was in the middle of puberty at age 12, her parents divorced. She started shoplifting, but when her mom found out, she was sent to London for a summer to work as an au pair.

“I did some shoplifting in London and got sent home, and then they met me with the Buxton school catalog and said, ‘That's it, you're going to boarding school.’ ... I think I was difficult to have around, but also they were not up to the task of parenting their kid,” she tells KCRW.

She was sent to the Buxton School in Massachusetts. “Buxton was very weird and bohemian and different, and I was very suspect of the whole thing, and then I just fell madly in love with it. It was really a very intense place, a small school of 100 people on the campus, including faculty and support staff,” she explains. “It became my family, became my home, and I really grew up there. I learned how to be funny in the smoking shed, which was a life skill that served me well.”

When she was 18 years old and about six weeks away from graduating Buxton, she fell for her music teacher.

“I had been friends with him and his wife. … I was definitely in a thrall to him. And I had a crush on him, in the way that one has a crush on an unattainable older man when you're a teenager, but I never ever thought that it would be anything reciprocated. So when he declared his love for me, it was a total shock.”

But she was eventually confronted about the relationship and was asked to leave the school. Schickel says she was shocked by the decision at the time because other students were in romantic relationships, and that type of behavior felt normalized.

“It never occurred to me that anyone would be upset about it. But you have to remember too: That was a different time, wasn't it? I mean, the culture was just saturated in pedophilia. I mean, I had been called in to audition at the age of 10 for Louis Malle’s ‘Pretty Baby’ because his casting agent was allowed to walk down the hallways of the Dalton School (in New York) and look in the classrooms for girls who could play the child prostitute.” 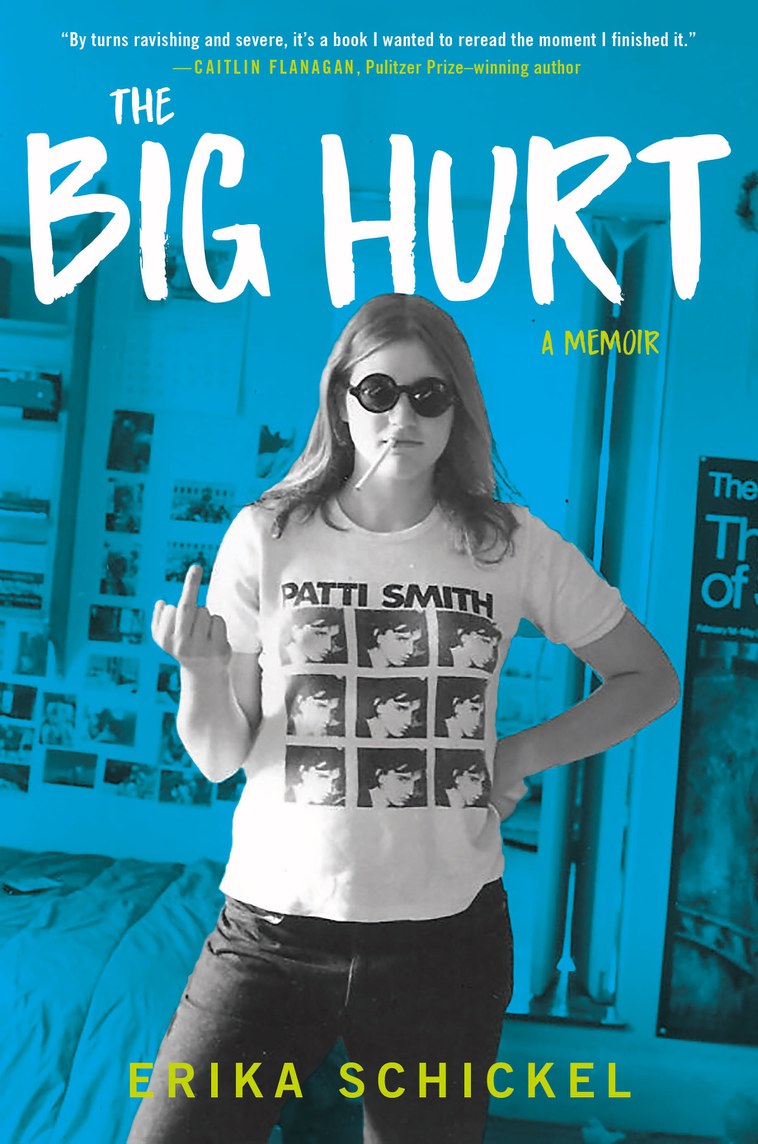 Schickel says her teacher was also fired, and the duo began living together. Then one day, he took them on a drive and told her she had to go back to New York.

“He said, ‘I need you to go back to New York, and I've called your father and he's on his way to get you right now.’ So when we got back to the apartment, there was my dad and his second wife waiting for me. We threw everything into the back of the car, and I never saw Henry again.”

Romance with a crime author

When she was older, Schickel met notorious crime author James Ellroy — who she refers to as Sam Spade in her memoir — in the green room at the LA Times Festival of Books in 2007. She says he was wound up, distracted, and they made small talk.

The following year, she says they met again in the green room at the festival and she came to a realization. “​​I asked him what he was working on, and he said he was working on a book about his pursuit of women and that he was calling it ‘The Big Hurt.’ And when he said that, I thought, ‘Oh my god, I'm going to be in that book.’”

Soon, she added Ellroy on Facebook and almost immediately, the author sent her a love letter by private message. She was both taken aback and enticed by his forwardness.

She writes in her memoir: “It was so grandiose, so nuts, so lavish, and so inappropriate. He made me feel both alarmed and aroused. He presumed to know me, which I found affronting. He presented me with a version of myself that was a million miles away from who I truly was, or was it? Dark desires verging on kink had shadowed me my whole life, and I felt a deep stirring. I had never imagined being the femme fatale. … I didn't want him to think this was going to turn into some crazy affair. He begged me for my phone number, but I withheld it, which made him write to me more.”

The two eventually fell into an affair, though Schickel knew it would end in heartbreak and betrayal. At the time, she was married with two kids, but she says she was yearning for connection.

“My whole life, I had been looking for the connection I had been denied by my mother. … I was just trying to find home. And I was in a loveless marriage — I had been for 20 years, there was no intimacy between us. And I was starved for intimacy, and by that, I don't just mean sex. I mean the whole thing … being understood, being seen, recognized, acknowledged. And he offered all of that — pardon the pun — in spades. He really came on strong. Now in hindsight, I see that that was projection, that he was love-bombing me, but I had not ever really experienced romantic narcissism before, so I was kind of naive about it.”

Schickel eventually got a divorce and was forced to move out of her home. She says Ellory set her up in an apartment afterward.

“I didn't know what I was doing at that point. I mean, I was just a raw volcano of loss, and anxiety, and love hunger, and oedipal desire. As I say in the book, it was a perfect storm, and Spade was the perfect pirate. He literally boarded my ship and looted me and I let him. In the beginning, it was amazing. And then of course, it all fell apart because it was a narcissistic situation. It was … never gonna end well.”

Despite it all, Schickel says the relationship is the greatest thing she ever did. She says the affair felt like the natural progression of her life after the series of abandonments she experienced as a child.

“By the time I entered adulthood, I was so shaped by those experiences and so screwed up by them. I was very high functioning in other areas. I did not live my life like I was a hot mess all the time. But this was this sealed-off part that Spade opened up in me. So it was all there waiting for me.”

‘The Big Hurt’: A woman’s search for intimacy and acknowledgment

‘The Many Saints of Newark’: Don’t need it in your life, even if you’re a ‘Sopranos’ fan, says critic

Critics review “The Many Saints of Newark,” a prequel to “The Sopranos” TV series on HBO; “Titane,” a horror film starring Agathe Rousselle as a serial killer who becomes...

From shoplifting to illicit affairs, ‘The Big Hurt’ is about a woman’s yearning for connection

Erika Schickel’s new memoir is about how she blew up her marriage and family for an affair with a famous LA crime novelist, and how that echoed an experience she had in high...