In LA, graffiti has been around for more than a century, telling and tracing the history of the city. It’s all documented in the new book, “The City Beneath: A Century of Los Angeles Graffiti.” Anthropologist Susan Phillips  tracked the city’s graffiti as far back as the early 20th century.

She tells Press Play that graffiti’s power comes from its illicit nature: “It's threatening because it just doesn't obey the rules of society. … There's nothing about it that can be controlled from the top down. … But in the most basic form, tagging and the signature and the autographs people leave behind, there's no putting boundaries on that. And because it's illegal, it's immeasurably more powerful. So I've always thought that the illegality of it is probably the most important aspect of it." 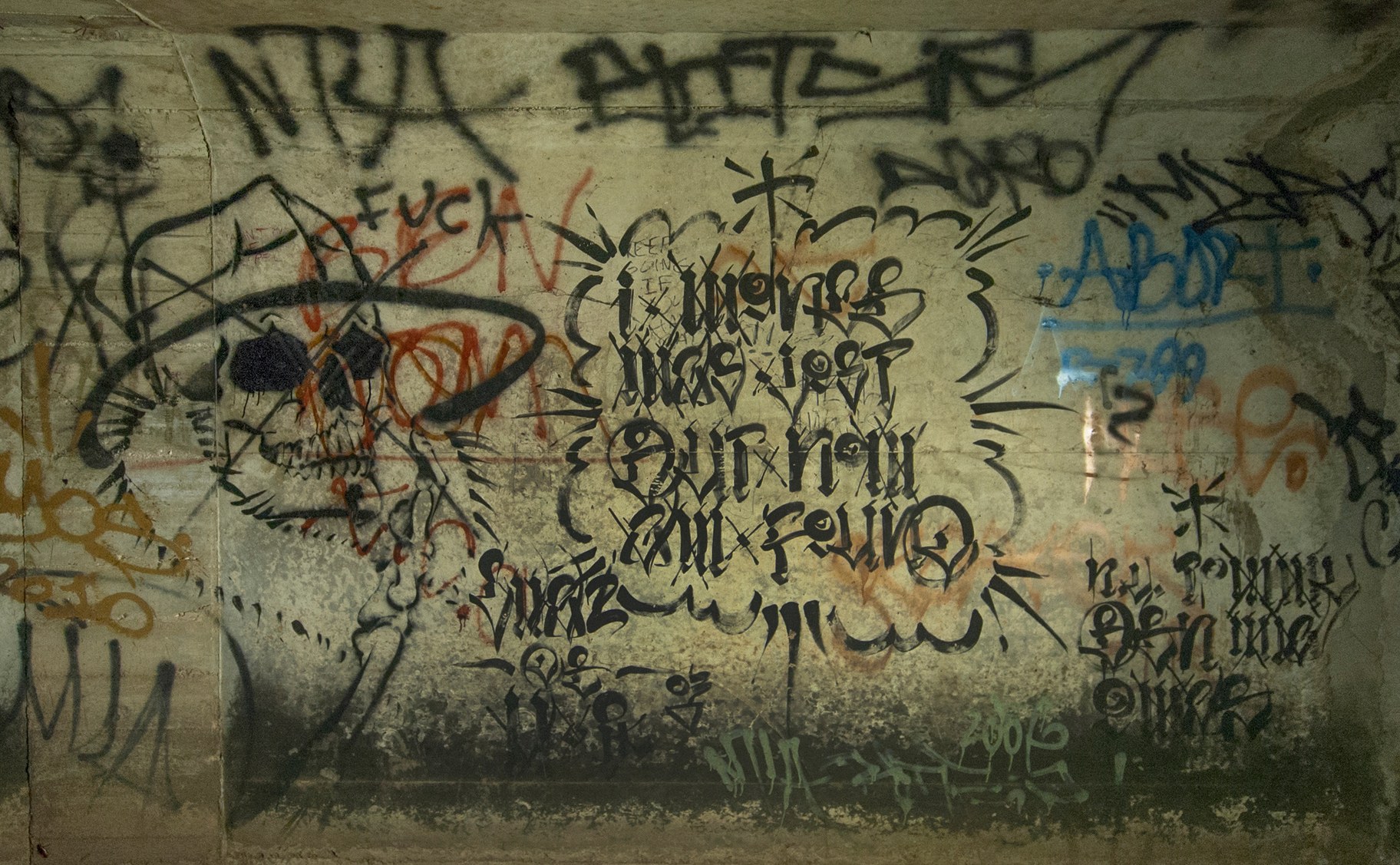 “I wonce was lost but now am found.” A storm drain tunnel along the Arroyo Seco. (All photos courtesy of Susan Phillips.) 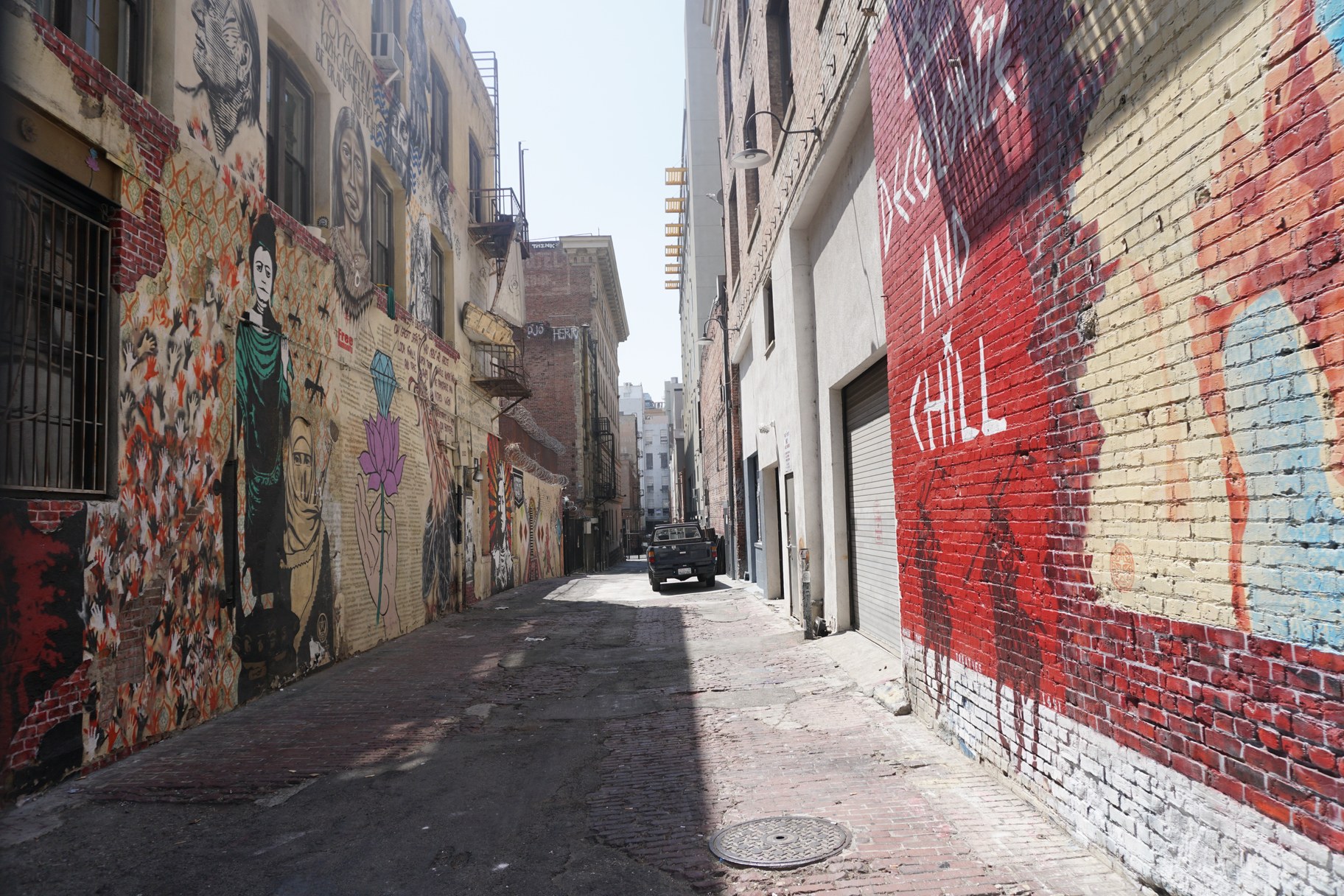 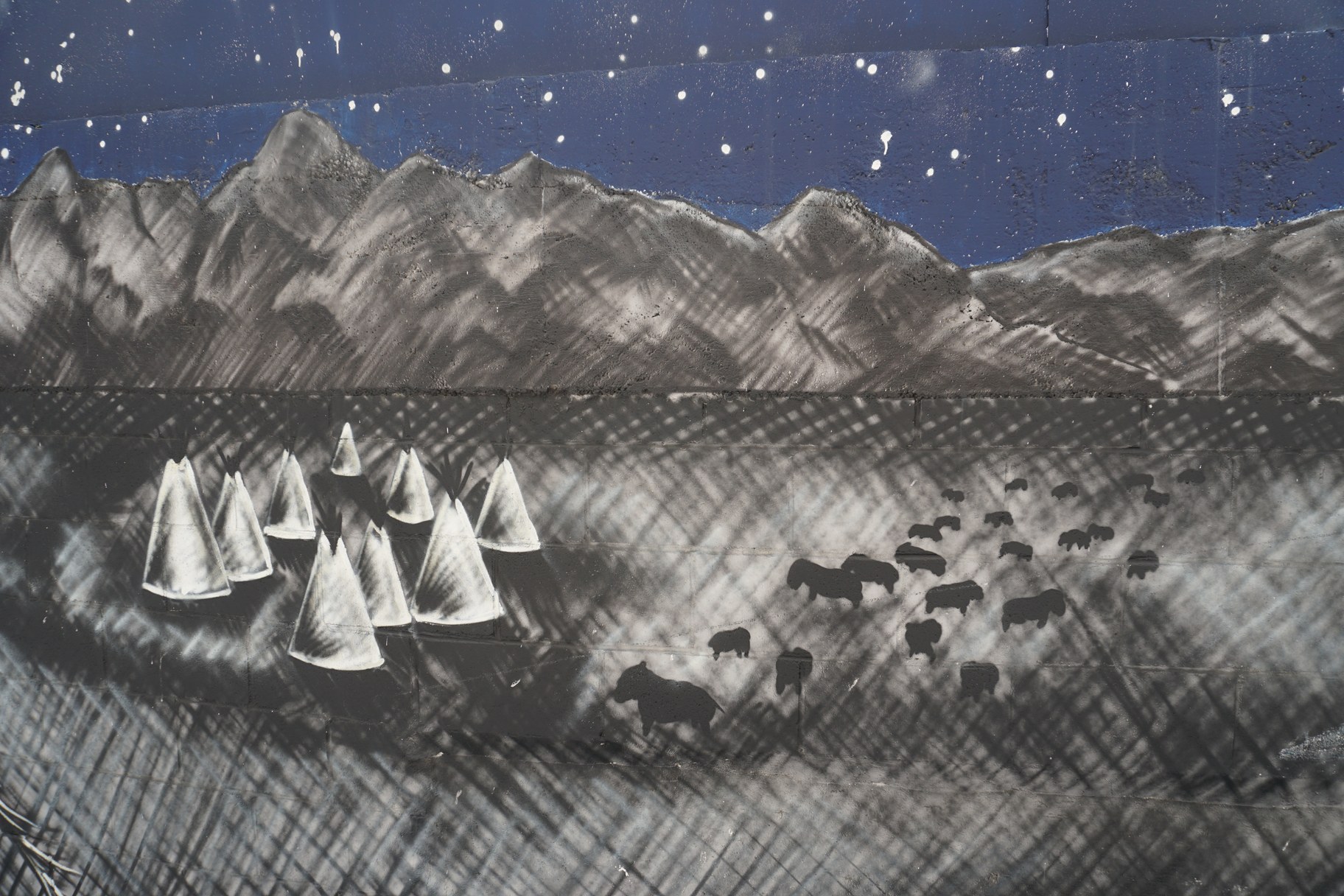 Phillips went to a place called J.K.'s Tunnel, and she figured out that J.K. was a carver from Connecticut who was probably schizophrenic.

“There's definitely mental illness going on with the compulsive listing that he's doing … of basically his whole version of a history of the world in this tunnel -- in keywords and place names. It's absolutely fascinating. The point of J.K.’s tunnel is that the mystery in graffiti is alive and well, and the most fun part of the process,” she says.

In his scribbles, J.K. documented places he had been to, including a psych ward. He was also likely homeless.

“He's this sort of probably something like a hobo at the time. ... Hobos are just this amazing post Civil War phenomenon. … They're like American folk culture meets subculture. They're kind of the first counterculture in a way, because people just hated them. … And they had a whole written system of communication,” she says. 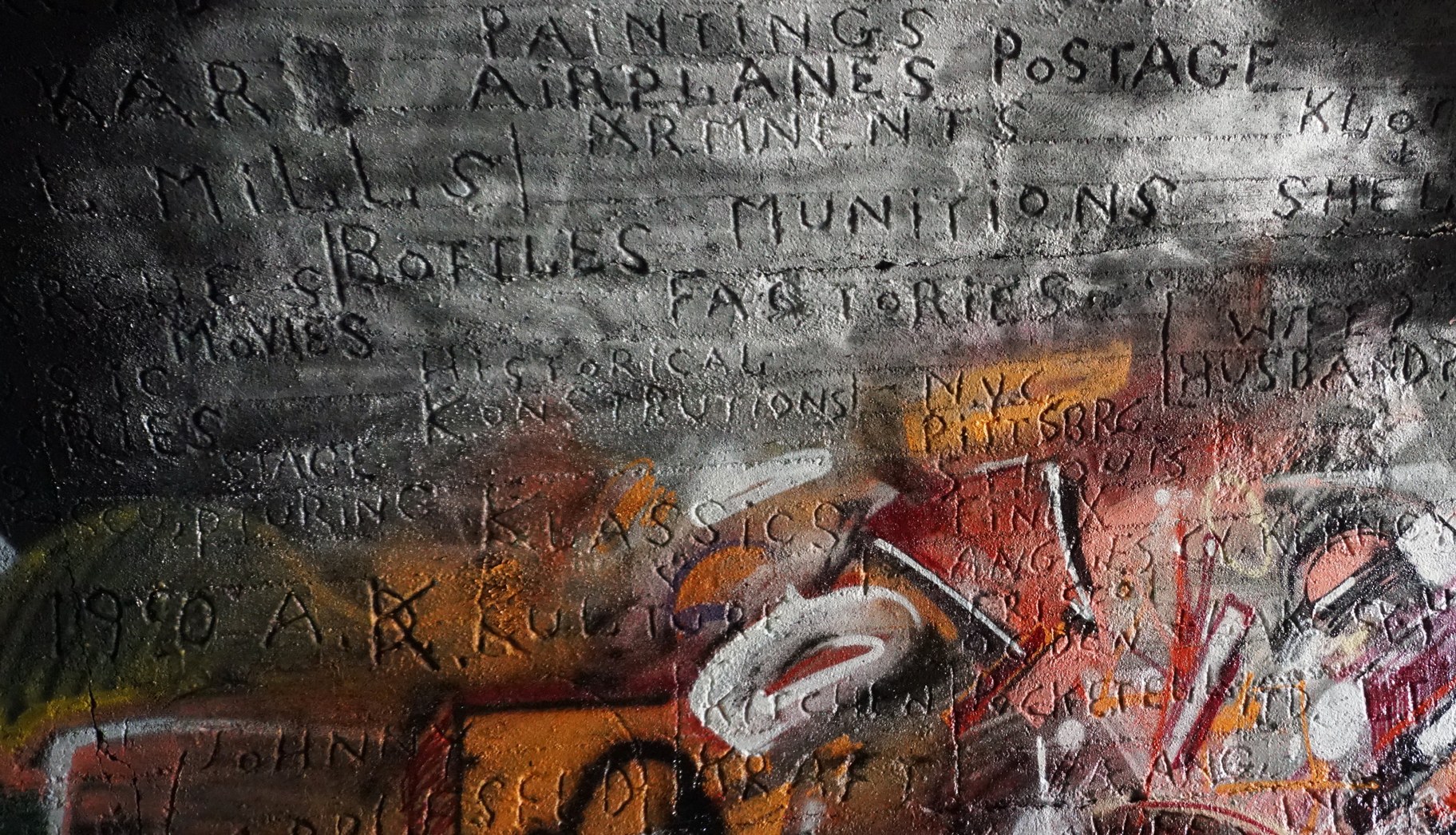 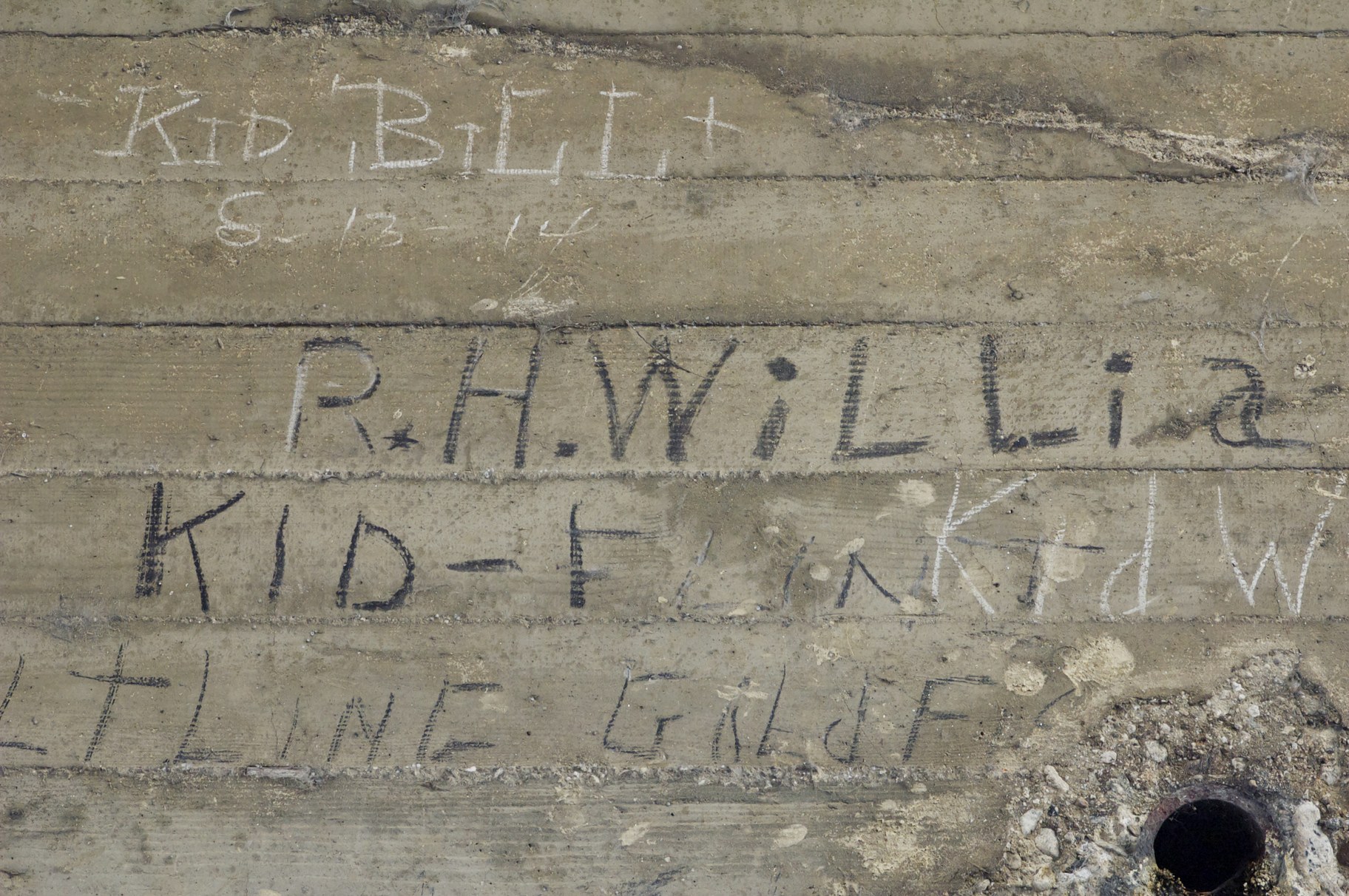 Kid Bill, as seen in J.K.’s tunnel. (All photos courtesy of Susan Phillips.)

“The writing that has remained up has been protected by weird flukes within the urban infrastructure. You know, the fact that the riverbed is at 90 degrees instead of a 45 degree angle. … Once graffiti writers got [paint] rollers going, it's game over for the older graffiti,” she says.

Who’s erasing or painting over the graffiti? Other graffiti writers, authorities, and gentrifying developers. “Anybody who tears down a bridge is destroying is destroying just untold numbers of voices from the past without even realizing it,” notes Phillips.

Early gang graffiti from the 1940s at the Olympic Boulevard and Spring Street Bridges: 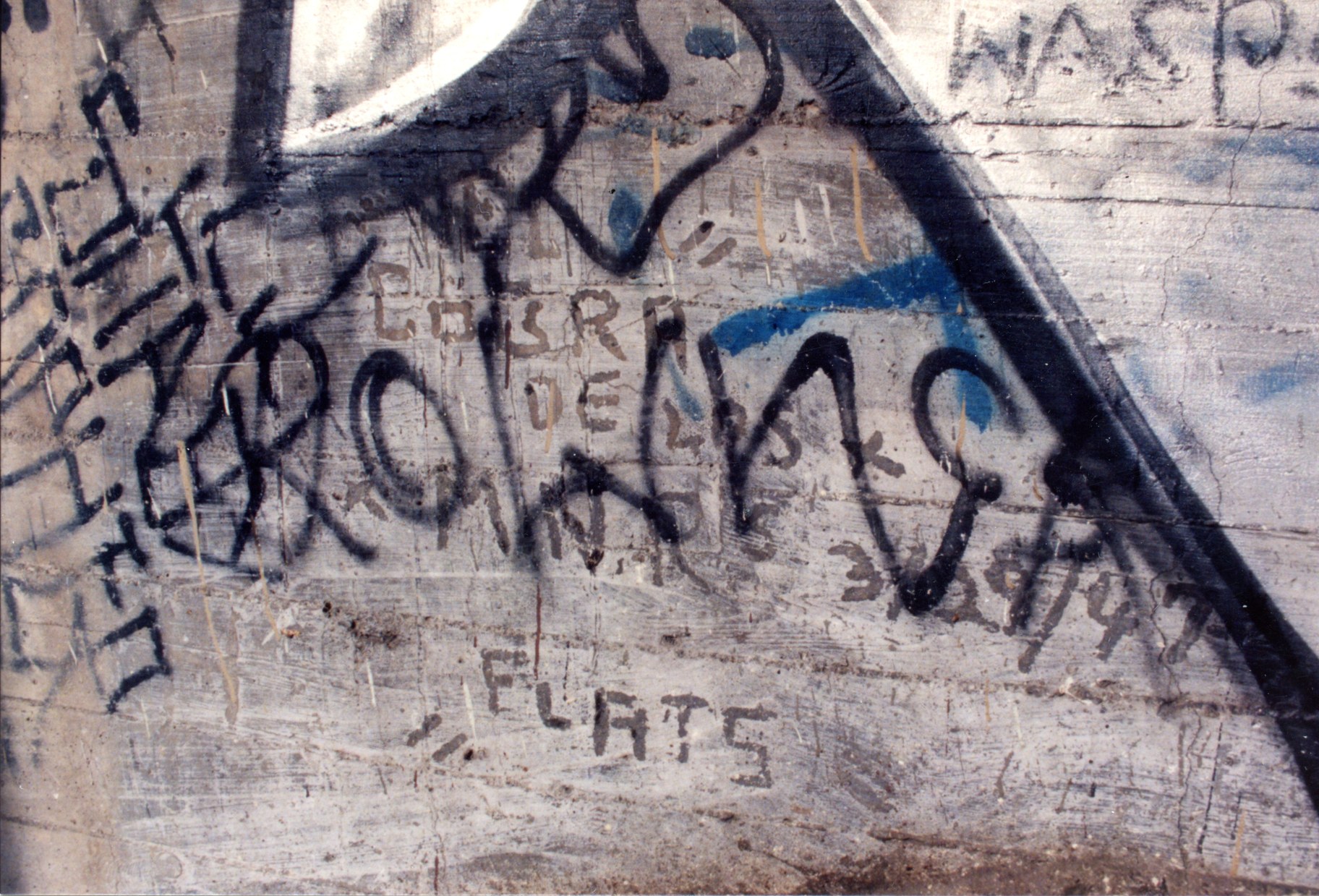 El Cobra de los MNRs, Flat. 3/29/1947. Use of quotations, crosses, pluses and rays were established design solutions from the slightly earlier Pachuco era. The use of tar as a graffiti medium originated with hobos at the turn of the century. (All photos courtesy of Susan Phillips.) 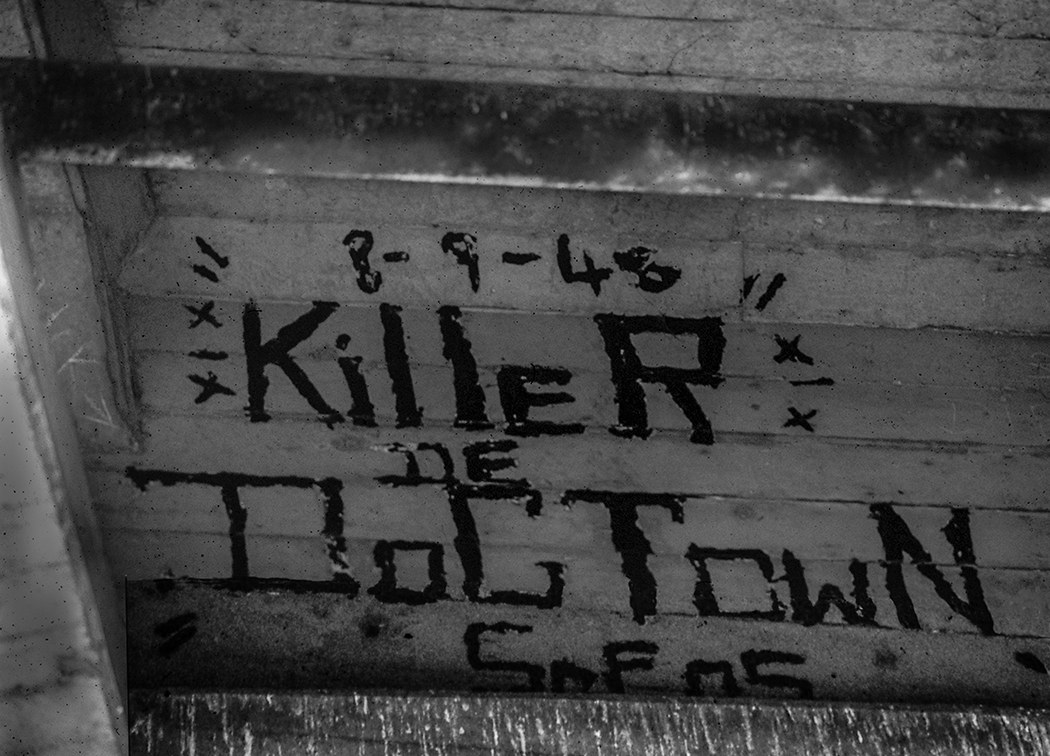 Killer de Dog Town, Safos. 8/9/1948. Safos is a literal reference to "safety" and is meant to protect the image into the future and reflect any bad sentiments, such as cross-outs, onto the aggressor. (All photos courtesy of Susan Phillips.)

Phillips discovered places where gay men met and chronicled their time together and/or their love for one another. “That was one of the most powerful things for me,” she says.

It was important to contextualize the graffiti in the era. “What did it mean to be a gay couple in 1928? And to leave your name on a wall at a time when homosexuality was basically outlawed? Any homosexual acts, you could serve time for sodomy. And the LAPD prided themselves on being one of the fiercest enemies of homosexuality in the nation,” Phillips says. “And so the walls became a kind of place where people could express those ideas. There was no public or private space of any kind that could offer that to them anywhere else.”

The Spring Street Bridge was one of these places of expression. It was nearly destroyed and then saved, Phillips explains. And when construction was happening, the abutments (hollow, interior spaces) of the bridge were opened, and that was where a queer space emerged. (The abutments were open until about 1940, then sealed shut.)

One of the couples who came there were named Mike and Walt. “They have beautiful, simple writings and sort of amatory declarations,” Phillips says. 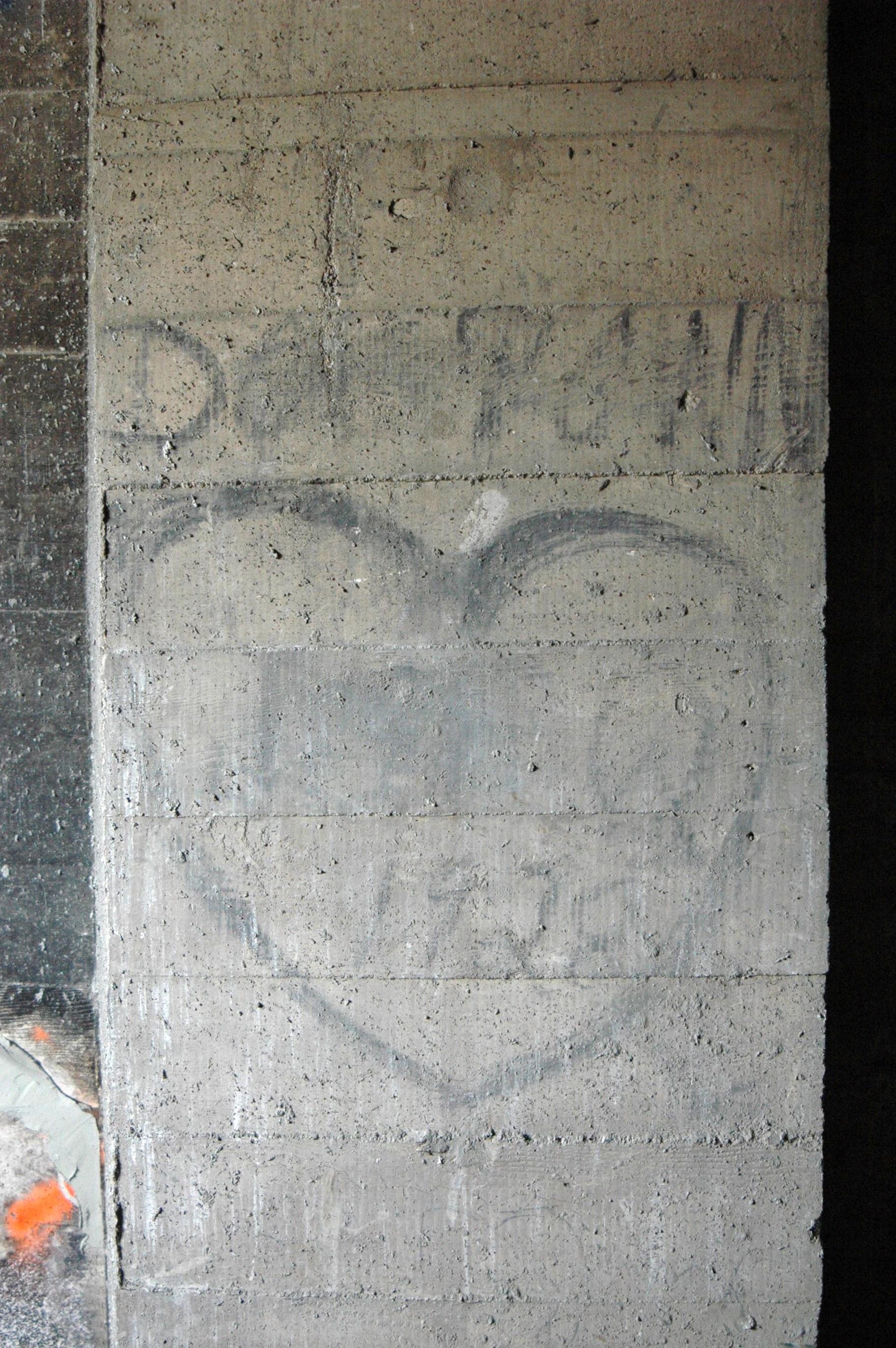 Heart with M + W? 1928. This is the earliest known graffiti to reference a Los Angeles neighborhood. May be a reference to Mike and Walt. The first letter inside the heart may be Mike's curly M and ending with a stylized W. Now defaced. (All photos courtesy of Susan Phillips.) 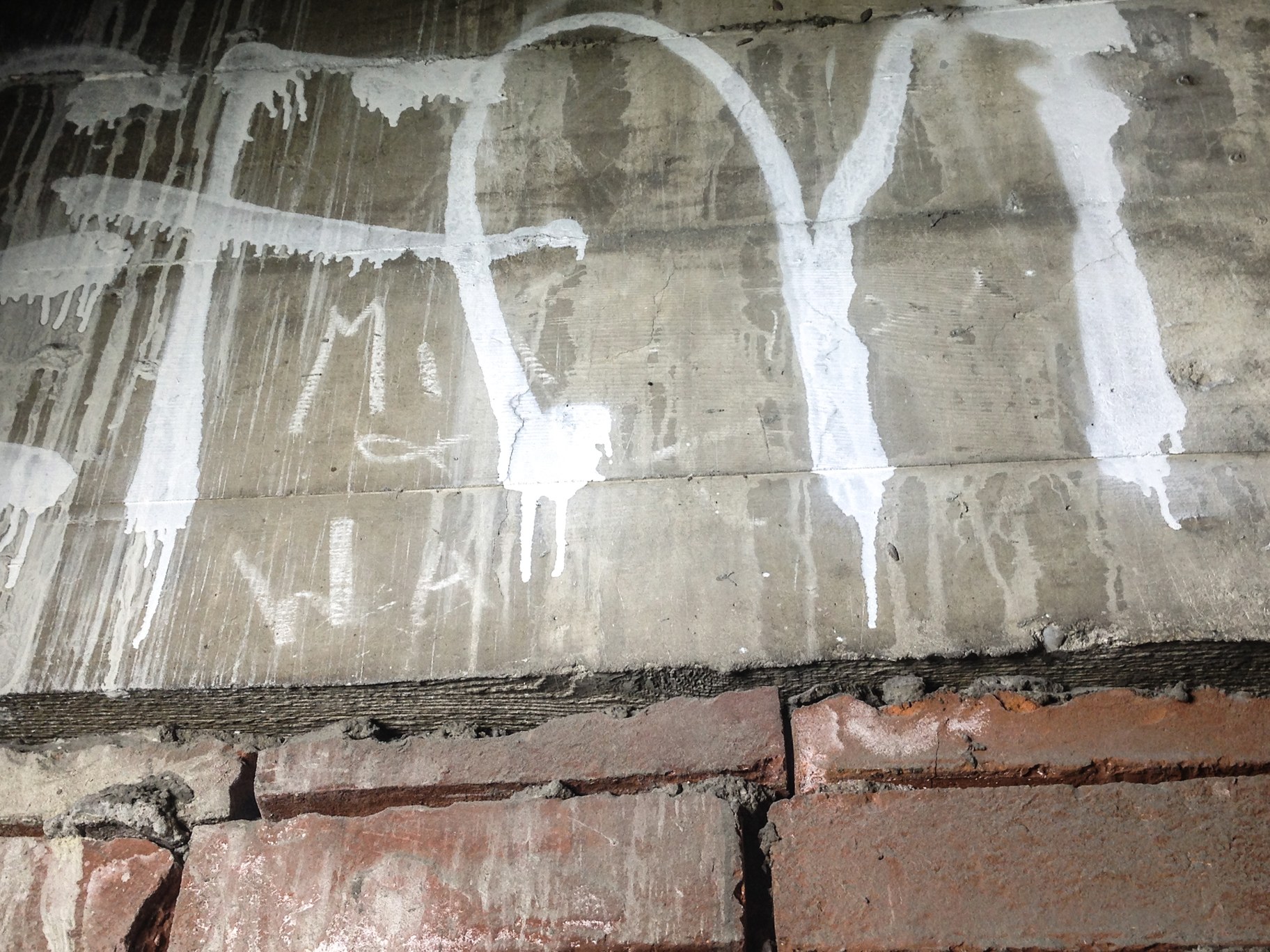 Mike and Walt. 1928. Over original bricked entrance. (All photos courtesy of Susan Phillips.)

“And then you've got somebody like Lee from El Paso who's writing about really kind of pornographic kinds of homoerotic intimacies in very explicit ways,” she adds. 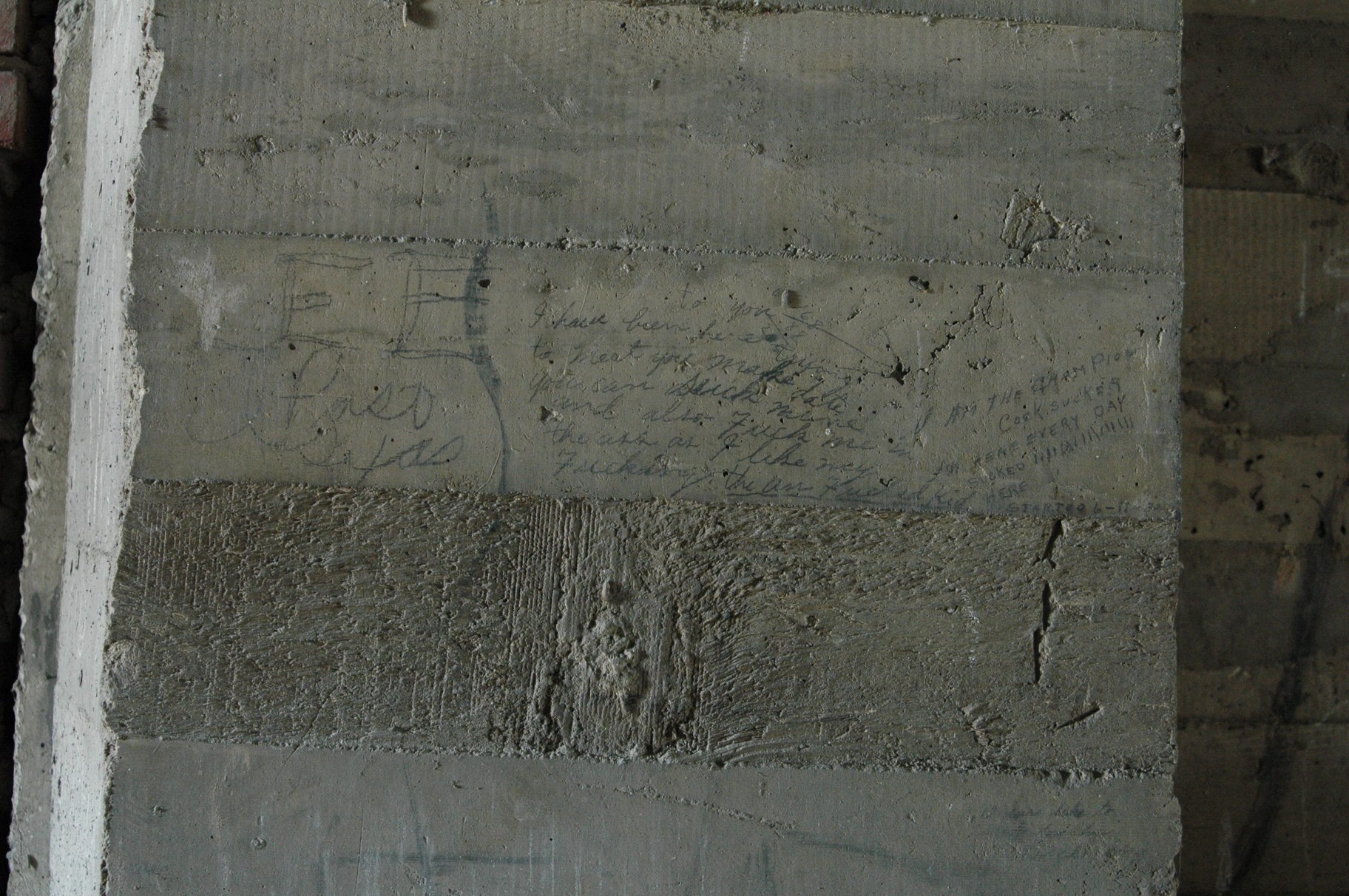 Full view of Lee's homoerotic writings. Use of the term "Kid" denotes potential links to the hobo community. (All photos courtesy of Susan Phillips.) 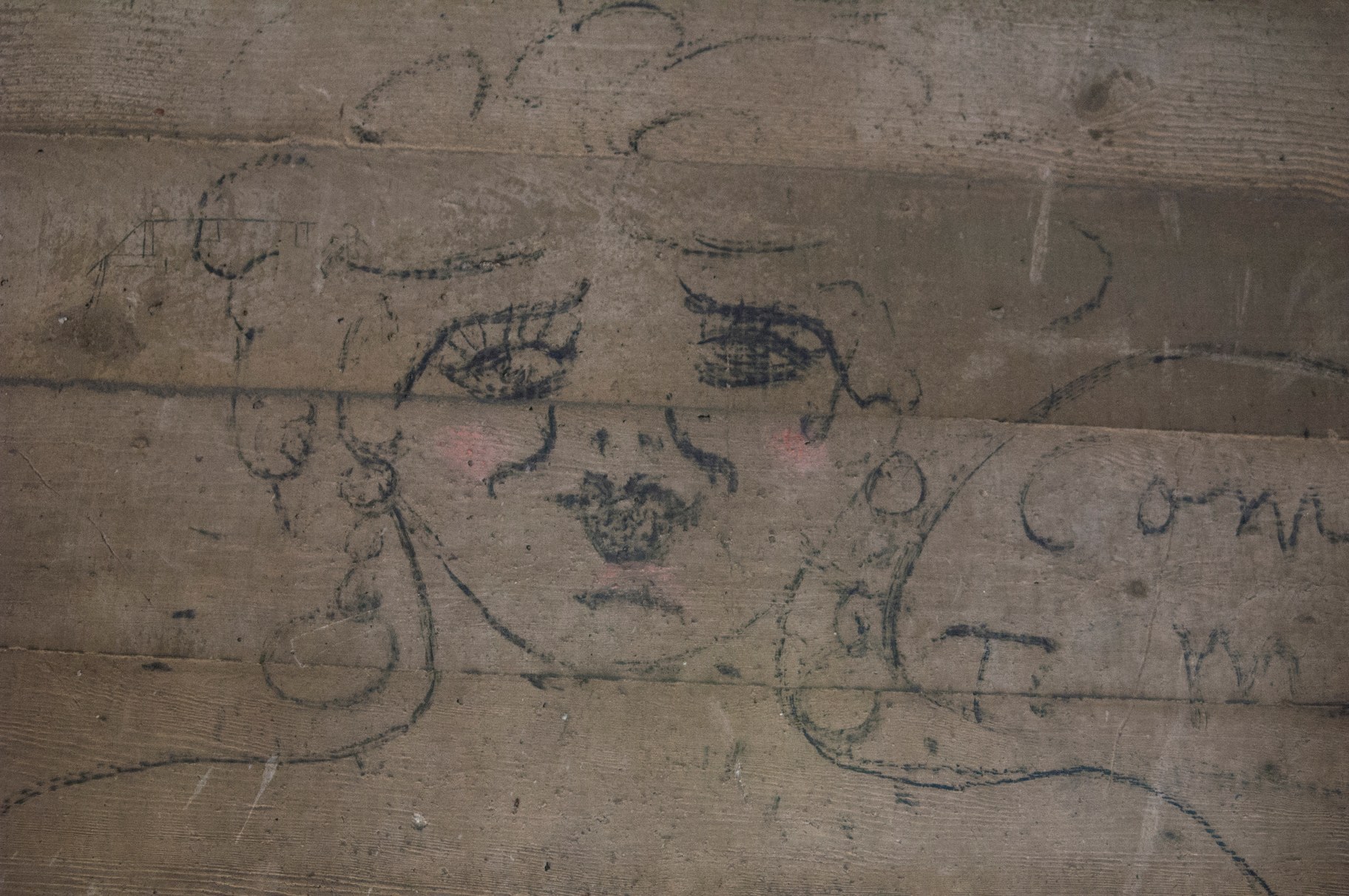 Pretty lady. “Come to me!” (All photos courtesy of Susan Phillips.)

What does the internet and social media mean for graffiti?

People now heavily express themselves online (via Instagram, for example). So will street graffiti continue, change, or recede?

Phillips identifies one kind of graffiti that’s receded: “The internet has fundamentally shifted the need for bathroom wall graffiti as a genre. Because I think before, the bathrooms and bathroom walls were … like hookup places, and they were places where people did express non-normative types of desires and just desires in general, incredibly pornographic ones, which now the internet is full of. So I think that bathroom wall graffiti has seen a serious decline in recent years.”

As for other kinds of graffiti, Phillips says, “They want to do graffiti in public places, in infrastructure, on walls. So that they can snap a picture of it and put it on Instagram. So graffiti lives on Instagram, but it also lives in the world. And so both of those things are going hand-in-hand. I don't think there's going to be any decline in it at all.” 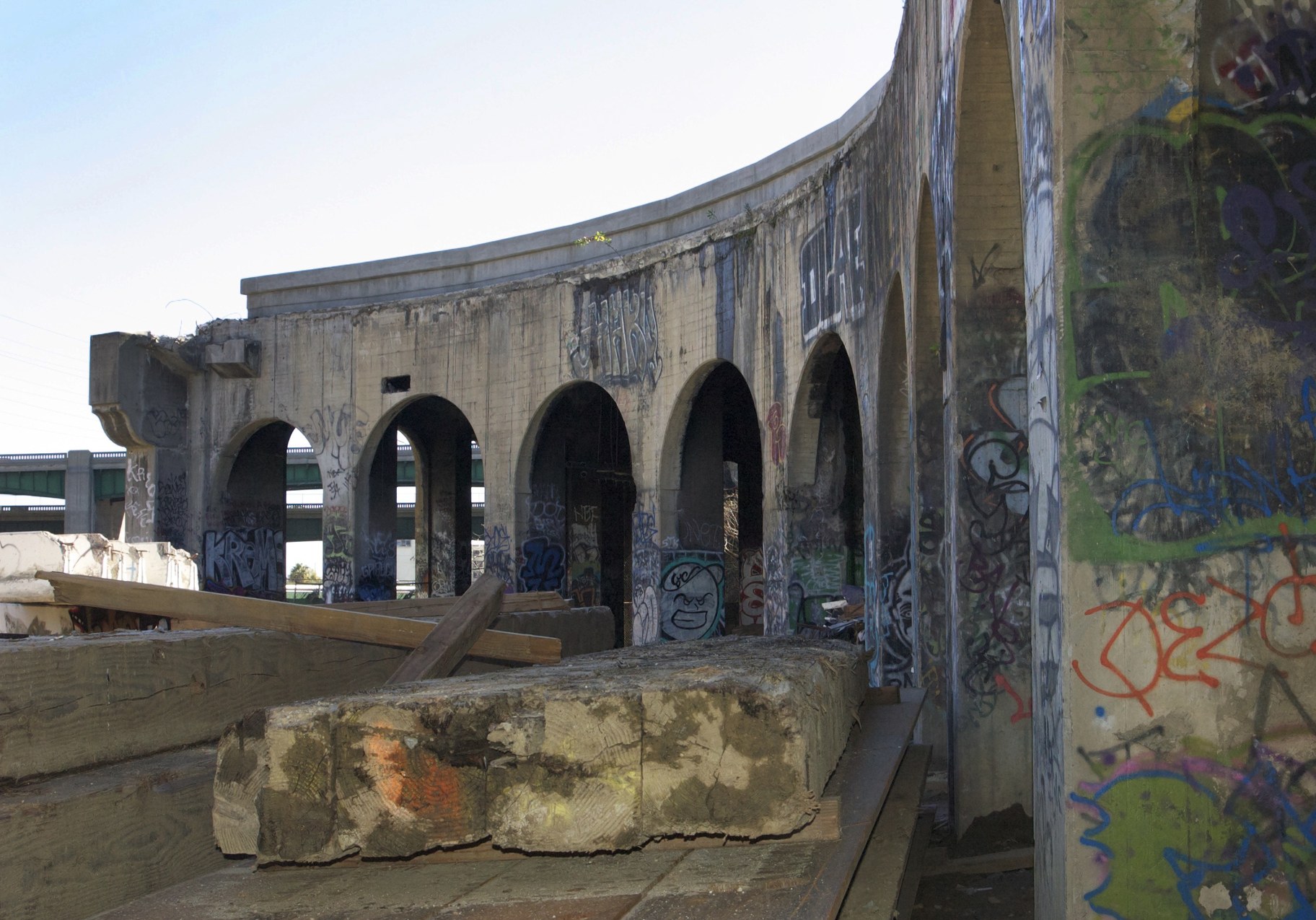 Elysian Arches. Arches from 1927 with no bridge. (All photos courtesy of Susan Phillips.) 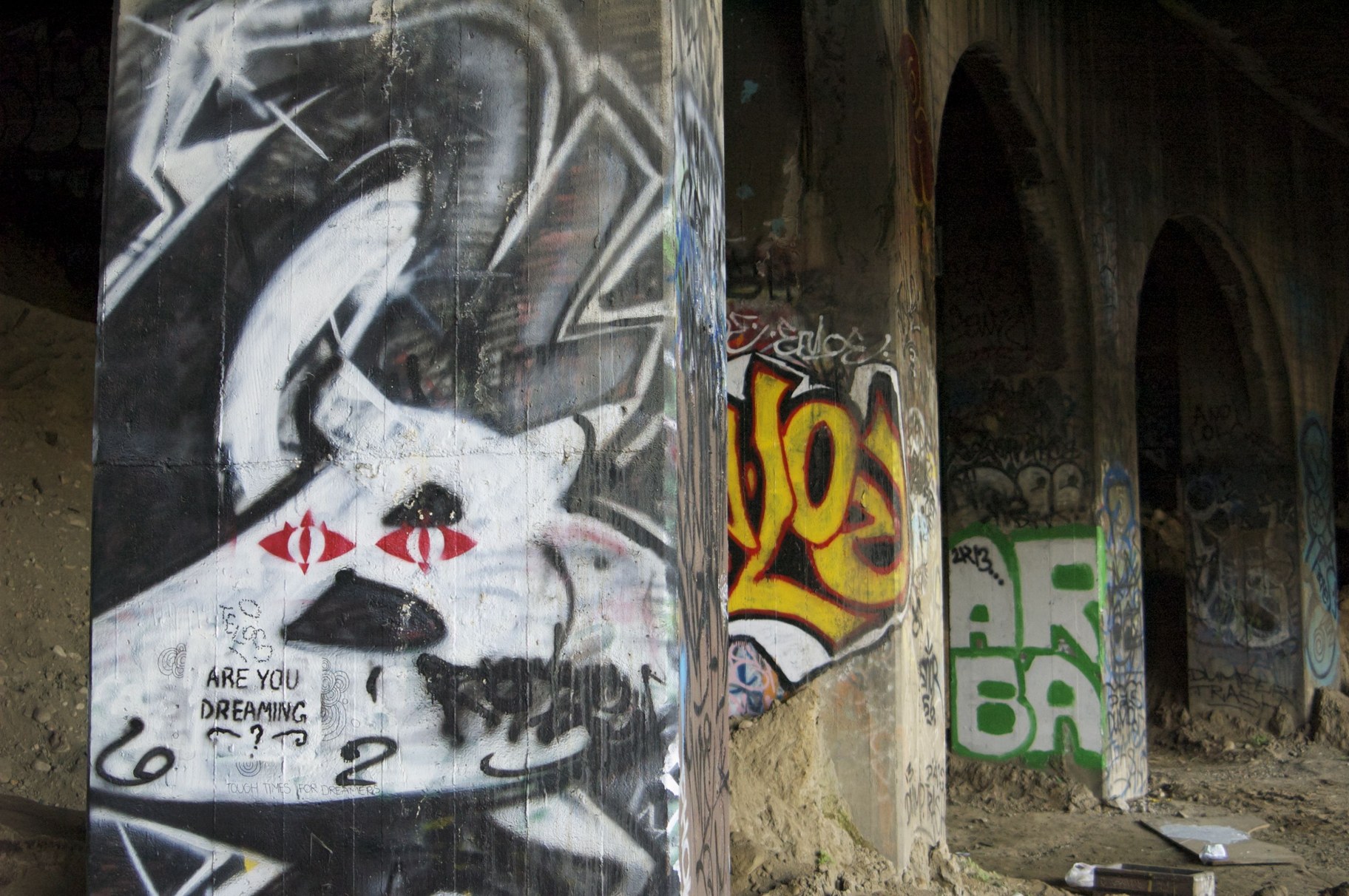 “Are You Dreaming?” Dayton Arches. (All photos courtesy of Susan Phillips.) 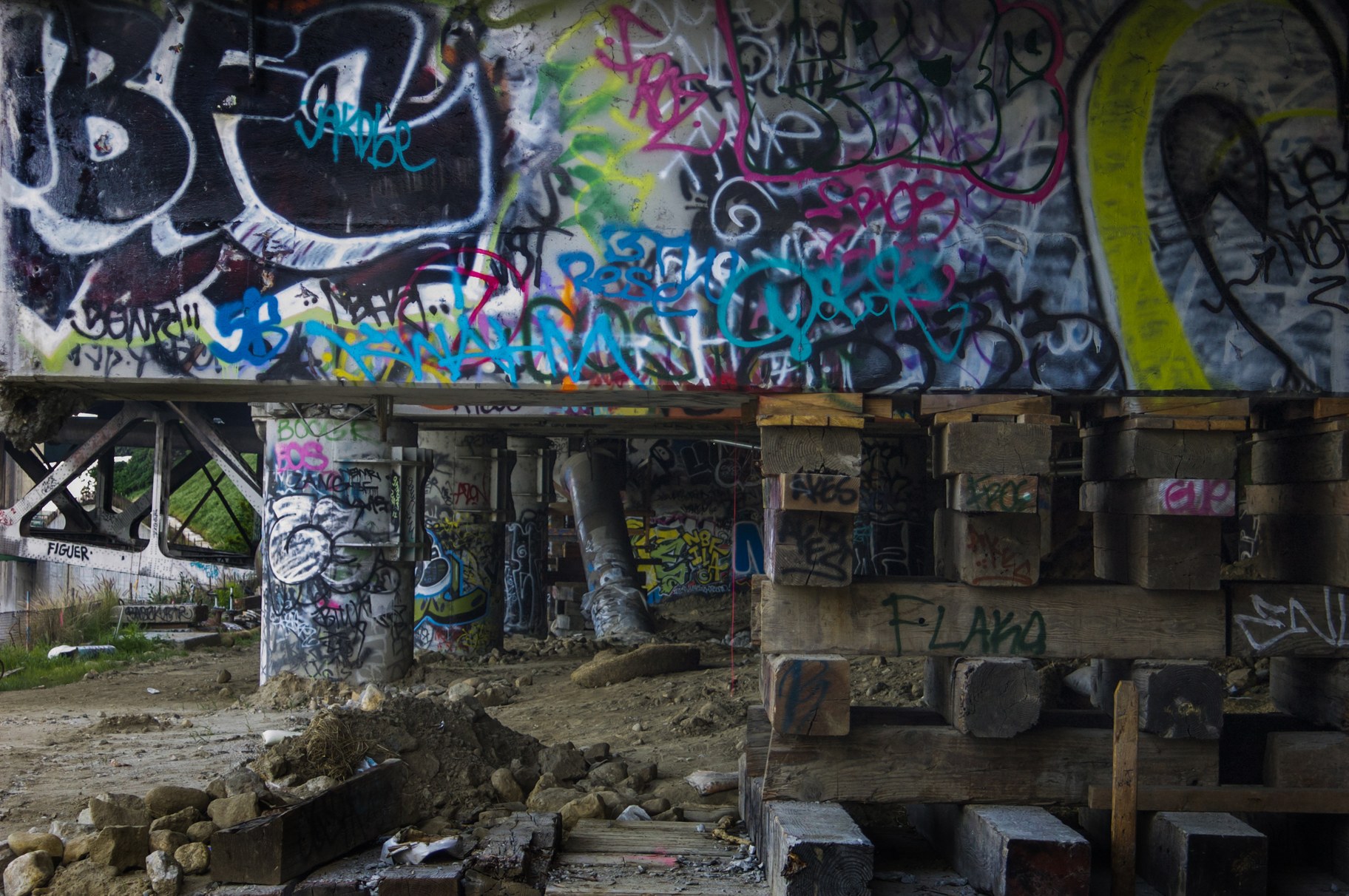 Bricolage and construction. (All photos courtesy of Susan Phillips.) 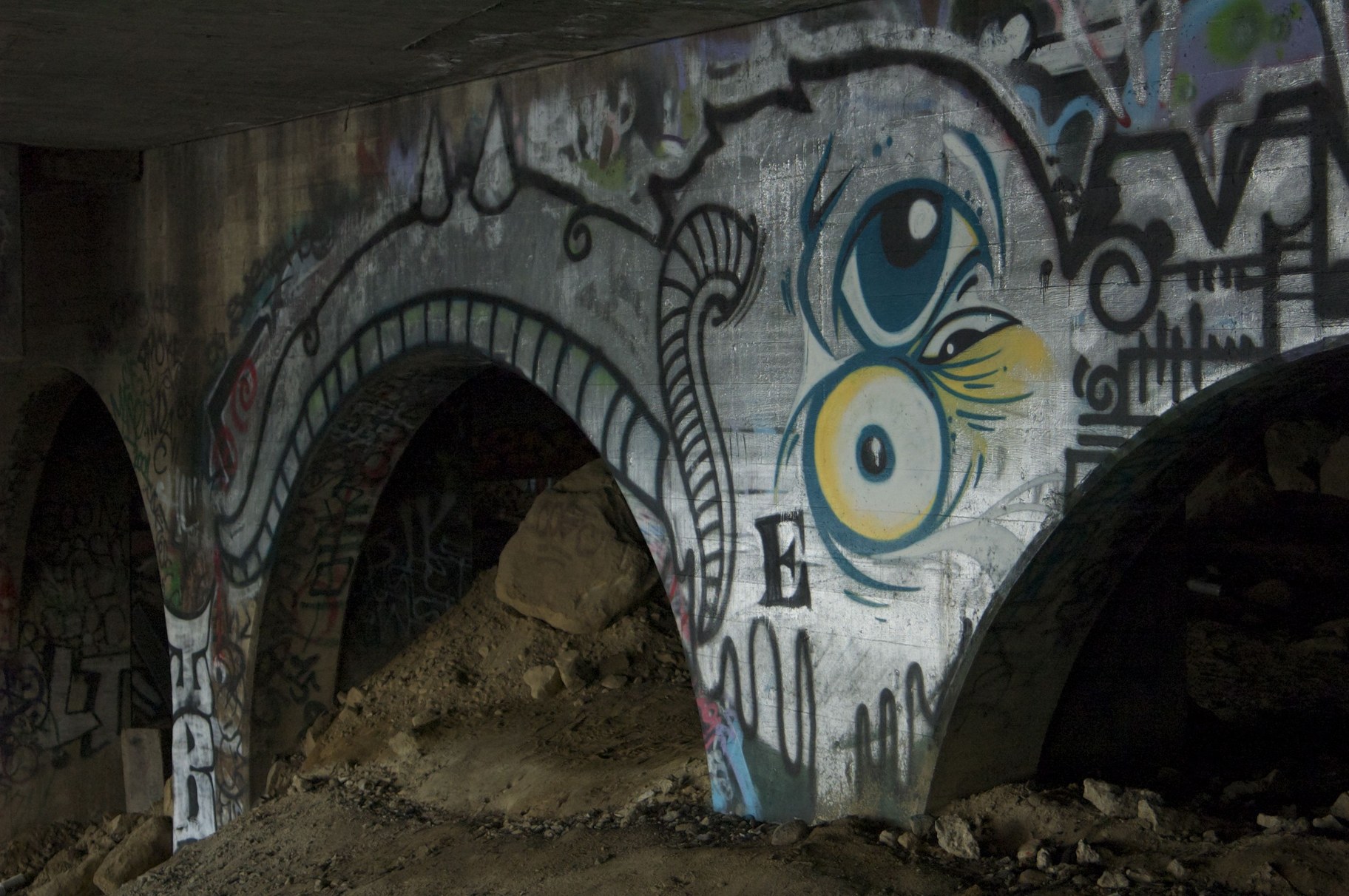 Gaia with boulders. (All photos courtesy of Susan Phillips.)