Parents and students at Clover Avenue Elementary march to support the LAUSD teachers, and to shed light on the "charter issue we have here in LA”. Photo by Jenny Hamel/KCRW.

LA Unified School District announced today that it’s reached a salary agreement with the teachers union (UTLA), which came after a state-appointed fact finder recommended a 6 percent raise. But when we reached out to the union directly, they told us no agreement was made, and there are other major disagreements between the district and the union on class size, standardized testing, and staffing. So teachers could still strike next month. 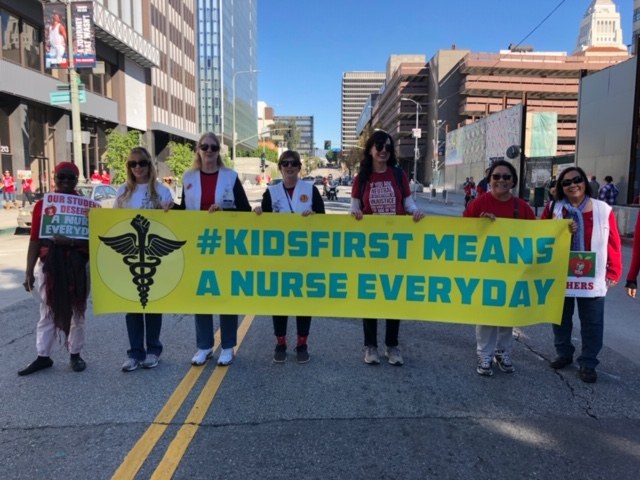 School nurses march to support having a nurse on campus each school day, instead of having a nurse visit a school one day a week. They say it’s about the health of the children. Photo by Jenny Hamel

What are the allegations of illegal conduct by the Trump Foundation?

LA Unified School District announced today that it’s reached a salary agreement with the teachers union (UTLA), which came after a state-appointed fact finder recommended a...

What life is like along on the Texas-Mexico border

President Trump today said he would seek “different” sources to pay for the border wall. The LA Times’ Molly Hennessy Fiske has been writing about life in the border town of...

Global Trumpism and the subordination of women

Peter Beinart writes in the Atlantic that the right-wing populists rising to power across the world have one glaring thing in common: their desire to subordinate women.

Written by Amy Ta, produced by Yael Even Or Press Play producer Yael Even Or is from Israel, a mostly Jewish country. In Israel, Hanukkah is not the spectacle it is...