Mandy Moore on playing her most daunting role, and moving on from Ryan Adams to make music again Mandy Moore says her career began at an Orlando Magic game when she was 12. "A lightbulb went off" as she watched a girl her age sing the national anthem. Moore sent a video of herself singing to Orlando Magic officials, got jobs singing for sports teams, and was discovered by a recording studio. As a high school freshman, she landed a recording deal, toured with NSYNC, and became a pop star.

Despite the stardom, she wasn’t forced to grow up too fast. "Everybody always allowed me to be me,” she says. “They understood that I was a young person first and foremost."

Now 35, Moore stars as matriarch Rebecca Pearson on "This is Us," which landed her an Emmy nomination for Outstanding Lead Actress in a Drama Series. Moore’s character delivers a stillborn baby, suffers the death of her husband while raising three children, and eventually gets dementia. 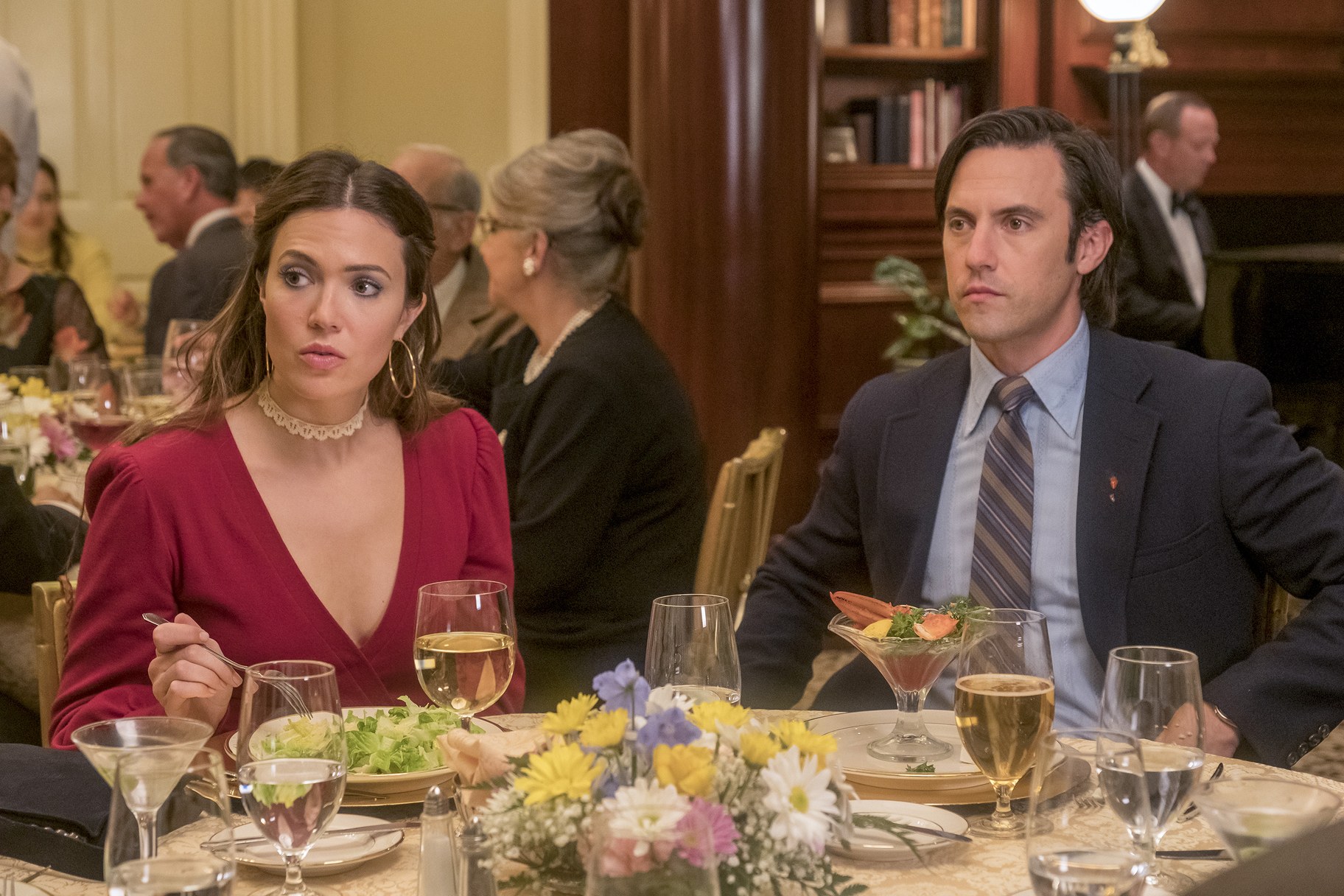 Mandy Moore in episode 401 of "This Is Us." Credit: NBC Universal.

"It was the challenge that I was most frightened by, taking on a role like this," she says about playing Pearson.

In the pilot of "This Is Us," her character is pregnant with triplets and loses one of them. Then when the show got picked up, showrunner and creator Dan Fogelman told her the story would be told out of sequence, so she'd be playing someone in her early 20s to late 60s.

She says she was daunted at first, but three seasons in, "it feels like slipping on a comfortable pair of shoes."

Healing from her marriage and divorce with musician Ryan Adams

Moore recently opened up about her relationship with Ryan Adams, who has been accused of sexual misconduct by various women.

"I've really felt...so empowered and emboldened by the women who decided to come forward since then. Not necessarily just about this particular case and person, but just in general. I feel like it opened up a conversation that really needs to be in the forefront more," she says.

Moore has said that Adams was a destructive force in her life, and that he tried controlling her and tried ruining her music career.

"It took me quite a bit of time to really contextualize what happened. I knew that it wasn't okay. I knew how damaged I was from it. I knew that I had to do the work on myself to sort of rebuild my self-esteem, my sense of self, the world around me, and in many ways my relationship to music, my relationship to my career in general," she says. "It took time, and distance, and a lot of therapy… I can only control my side of the street, and take my accountability in the situation into mind, and do the work. And that's what I'm continuing to do."

Moore says the musical side of her is flourishing now. Her last album came out 10 years ago, but she says she’s working on new songs, and has put to rest a decade of being at a standstill. “Not knowing how to make music again, why to make music again, could I make music again? Partially because this person just made me feel so small, and I allowed myself to feel that small. I had to recalibrate completely. And I think it's no small coincidence that putting that story to bed helped me sort of find momentum again," she says.

She says she’s recorded 10 songs, and hopes to release a full record next spring and go on tour.

"It's such a cathartic experience to sort of take this amalgamation of everything that I've kind of lived over the last 10 years since I've made music, and put it all in there. The joy, the grief, everything in between.”

Mandy Moore on playing a matriarch and making music again

The Trump administration says it plans to reverse Obama-era federal limits on methane emissions for oil and gas companies. Methane is one of the biggest drivers of climate...

At the recent G7 summit, world leaders raised alarms at the burning of the Amazon rainforest, which conservationists call the lungs of the earth.

Anti-vaccination sentiment has popped up on Pinterest, better known for recipes, wedding planning, and mood boards than for contentious political battles. Now...

Mandy Moore on playing her most daunting role, and moving on from Ryan Adams to make music again

Mandy Moore says her career began at an Orlando Magic game when she was 12. "A lightbulb went off" as she watched a girl her age sing the national anthem.

We know that deep breathing can help when you’re stressed. Now some deep breathing evangelizers say it can cure a lot more: chronic back pain,  depression, and even acne.