In East LA, young women of color have formed a cycling group called Ovarian Psycos. But riding bikes isn’t the only reason these women have come together.

“The bike was just a tool to get us together. It was more about sisterhood. It was about more like community organizing. It was to make change in our community, like heal,” original member Andi Xoch told Press Play. “It was part of our mission to heal ourselves physically, emotionally and spiritually.”

Many of the women are trying to recover from trauma and abuse. Some have strained relationships at home, and the collective has become a safe space for them to talk openly and find support.

The group, which has been around for about seven years, had a rocky start. During their inaugural Luna Ride — their most important ride that happens during every full moon, founder Xela De La X suffered a crash that fractured her skull and left her hospitalized for a week. Aware of the significant danger of cycling, only a handful of women returned to the next ride.

At that point, Xela identified which women were really committed to the group. This included Xoch, who said she embraced the rebellious attitude of the riders.

Xoch described the night rides, “We’re howling at the moon. We are being silly. We are looking after each other. We’re at war with the city. We’re dodging the buses, we’re dodging the cars. It feels like you’re dodging bullets. You’re dodging potholes. We’re yelling. It’s so much aggression released that I think everybody should experience it at least once.”

The Ovarian Psycos are the subject of a new documentary of the same name. It’s  directed by Kate Trumbull LaValle and Joanna Sokolowski, and premieres on PBS Monday, March 27.

“I was really just drawn to their kind of unapologetic approach to activism, their in-your-face strategies,” Trumbull-LaValle said.

The documentary also includes some critics of the group, such as Josef Bray-Ali, a bike shop owner who’s in the run-off to be a city councilmen. “There are probably people who could better handle the women’s issue discussion than the Ovarians because they have like little — tend to be kind of violent,” he said in the film.

Trumball-LaValle said she believes that the Ovarian Psycos are telling their stories in ways that are appropriate to them. “I think we tried to do that as filmmakers — to let the women speak for themselves and their experiences.”

Xoch explained, “Being raised in a neighborhood where you’re constantly being confronted by violence, especially towards women, it’s our natural reaction to want to fight back. We’re not going to try to talk it through because we’ve tried in our families, and it doesn’t work. So sometimes you have to resort to other means.”

For Xoch, the documentary has connected her with women beyond the group.“When I talk to some of the audience members, they look like me. They’re like, ‘You look like me. I see myself in the screen when I look at you. I see my family. I see my kitchen. And your relationship with your mom, it’s like, it’s the same thing.’ It motivates them, and it makes them feel good about all the struggles they had to go through regardless of the lack of support.” 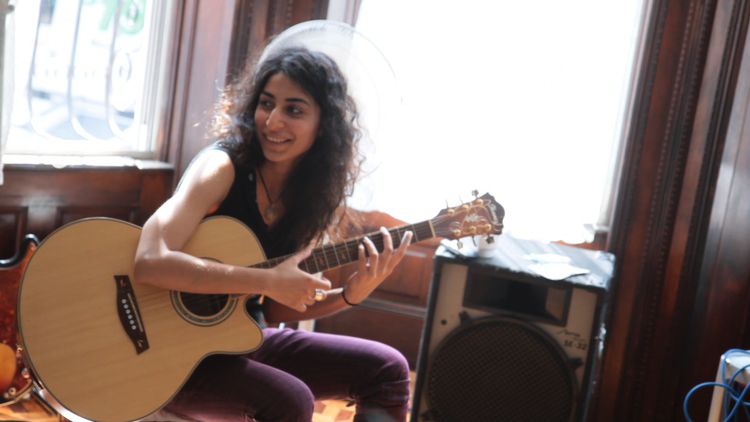