Dreyer tells Press Play that his job isn’t to correct things, but to streamline text. “It's mostly clarifying, so that sentences can get from the writer to the reader the way they're supposed to,” he says.

He says a good copy editor will read, for example, the first 50 pages of a manuscript without touching a keyboard or pencil, and figure out what the writer is doing. Then they would polish up the writing. “No copy editor can turn a bad manuscript into a good book. You can just take a good manuscript and improve it.”

A mindless rule: never begin a sentence with “and” or “but”

Dreyer says “and” or “but” isn’t always the most effective way to start a sentence. Sometimes the sentence would work well without the “and” at the start, or you could use a comma rather than start a sentence with “but.”

However, you can break this rule. Dreyer says you should begin a sentence with “and” or “but” if it suits your purposes. Many great writers do this. 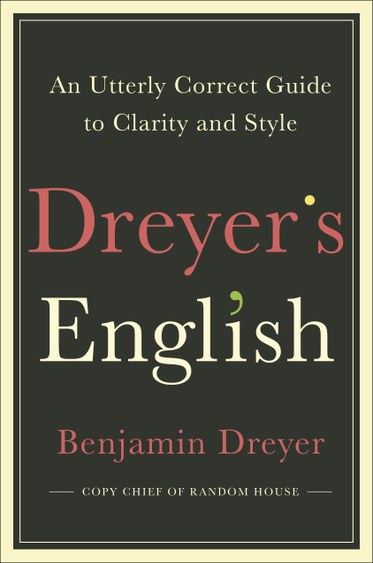 The cover image of “Dreyer’s English.”

“Actually” and “literally” are unnecessary

Dreyer says there are all words we use as crutches, and they’re not bad unless you use them so often that people start getting irritated.

He says “actually” is a problem word, and he tries to restrain himself from using it in speech.

If he sees the word in writing, he cuts it. It’s unnecessary, and has become the mansplainer’s word. “Well ‘actually’ -- it's like brace yourself because somebody is about to condescend to you. So it's become such a beacon of condescension that I think it's really good to snuff it out as fast as possible.”

“I know there are people who say you shouldn't use adverbs… Why would you eliminate from your writing an entire class of word? There's a reason why the word ‘utterly’ is in the subtitle of my book,” he says.

The Oxford comma, also known as the serial comma, is used after the second-to-last item in a list (of three or more items), before “and” or “or.” For example: “Charlie Brown, Linus Van Pelt, and Peppermint Patty.”

“Most people who have been raised in book publishing endorse it without a second thought… Many people who have worked as journalists have been taught not to use it. And each group rather despises the other group,” says Dreyer. “I try not to get violent about it, but I do endorse the comma, and I think it serves a number of purposes.”

One of those purposes: to ensure that the two final items in a list don't seem to have a relationship that they’re not meant to have. The Oxford comma is clarifying, Dreyer says.

There are ways to avoid using “whom” altogether, and even if you use it correctly, you could still sound pedantic.

Dreyer says what’s worse is an incorrect use of ‘whom,’ when you use ‘who’ instead, and that’s called a hypercorrection.

“That comes under the heading of ‘give it to Jill and I.’ That’s another kind of hypercorrection. You're simply trying so hard to be correct that you get really hyper about it, and you go all the way over to the wrong side.”