Jodi Weiss (second from the right) with her crew members in 2017. Photo courtesy of Weiss.

The annual Badwater ultramarathon begins tonight in Death Valley, where the temperature is expected to reach 113 degrees. Over two days, runners will try to cover 135 miles, ending at the entrance of Mt. Whitney. Badwater has been called the world’s toughest footrace.

Jodi Weiss has run it four times, but during her last attempt, she suffered heat exhaustion and was pulled off the course before mile 50. So this year, she's sitting it out, and assisting runner Emily Ryan instead.

Weiss explains that each runner has at least three crew members who drive the support vehicle, provide food and water, and set the pace (the pacer doesn't enter until mile 43).

"When it's really hot and sunny, it's replenishing the runner's ice and water and whatever else they might be drinking. Depending on calories, they might want to come and get some food out of the van. They might want to be sprayed down, or [have] ice put on their body," says Weiss. "Sometimes when things aren't going well, they might need to sit in the car and get a little bit of air conditioning, but that's rare. We save that for -- if a runner's desperate. Later at night, the runner might need to take a 10-20 minute nap."

Those who finish within 40 hours nap once or twice for 10-40 minutes, but the fastest runners don't need downtime and do the whole race straight in 25 hours, explains Weiss.

"One year, I was sleepwalking on the road. And so I came into the van, and I slept for 10 minutes, and then I was ready to go," Weiss recalls.

She also hallucinated one year when she was surrounded by mountains. "I thought I saw people. I thought I saw like monsters and dinosaurs. But that was my first year, and it was a learning curve for me. And I have not [hallucinated] after that." 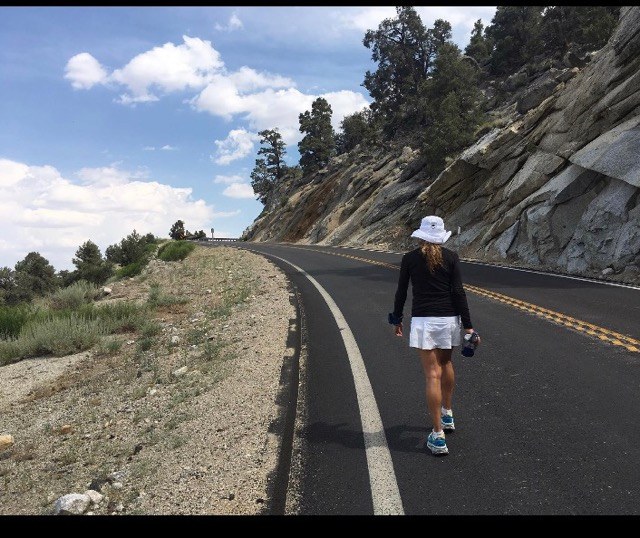 She says as people do ultra distances more often, they learn how to race smart, and that means understanding when they exhausted, when they need calories, and when they should run or walk or rest. All of that alleviatiates hallucinations and sleep walking. However, the second night is when most people start to shut down.

Why exactly do people take on this extreme feat? Weiss says it draws a certain kind of person. "We all love the heat. It just feels incredible… But I also think Death Valley is a magical place. It's so majestic. It's one of the places in the world where it makes you really feel how little you are, and what a big world it is. So I think it's just life-giving."