Hell of a Job RAPE ON THE NIGHT SHIFT
Thousands of office janitors work at night, alone, sweeping up the crumbs from our sandwiches, taking out the garbage and scrubbing bathrooms. Many are immigrants – some undocumented – and many are women. With these conditions, they are particularly vulnerable to sexual violence. 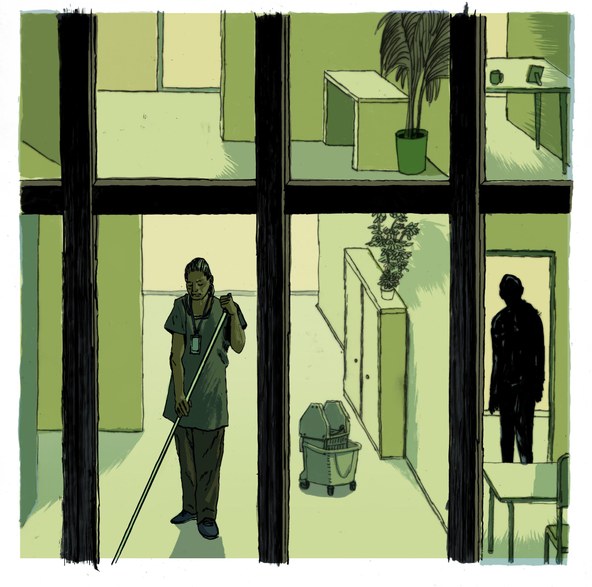 The night shift janitor is an easy target for abuse. It's tough work done for little pay
in the anonymity of night, among mazes of empty cubicles and conference rooms.
Photo: Matt Rota for Reveal

We hear from members of a tiny nonprofit who try to root out abuses in the cleaning industry; women who've sued janitorial companies for failing to protect them from rape and harassment; and an accused rapist who has run his own cleaning company.

This story is a part of a collaborative 18-month investigation with Frontline, Univision, the Investigative Reporting Program at the UC Berkeley Graduate School of Journalism and KQED.

TOXIC TECH IN AMERICA
In 1975, when she was 18 years old, Yvette Flores got her first job. She helped assemble delicate parts to make some of the first supermarket checkout scanners. When her son Mark was born five years later, he had severe disabilities.

It took 30 years for her to connect her son's problems to that first job.

Yvette discovered that she'd been inhaling and ingesting lead all day in the factory where she worked. And she's not the only one. An occupational medicine doctor who treated workers in Silicon Valley in the 1970's and 80's tells us about the widespread illnesses and injuries he saw – and how hard it was to get companies to open up about what was making his patients sick. 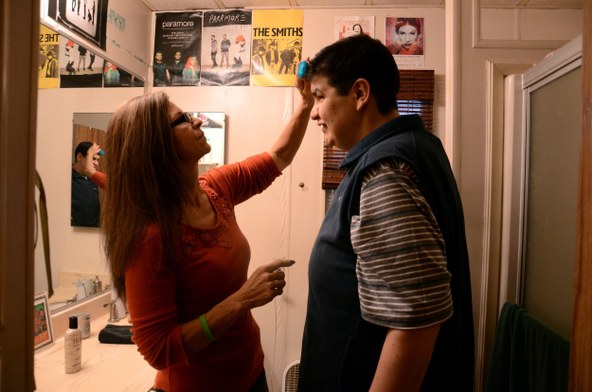 Yvette Flores built lasers in Silicon Valley while she was pregnant with her son Mark and was exposed
– she now knows – to dangerous amounts of lead and solvents known to harm the developing fetus.
Photo: Maryam Jameel/The Center for Public Integrity

Reveal reporter Laura Starecheski partnered up with Jim Morris from the Center for Public Integrity to bring us Yvette and Mark's story and also alert us to an alarming practice: Chemical exposures that never would be acceptable outside a plant's fence are not only tolerated, but legal, inside the plant.

Today, there are millions of electronics workers around the world – especially in places where labor laws are even less strict than those in the US.

Since the 1980's, the electronics industry largely has moved overseas in search of cheaper labor. Reporter Sandra Bartlett went to South Korea, where one of the largest electronics companies, Samsung, is headquartered. There, a movement has sprung up to investigate the illnesses and deaths among Samsung factory employees. 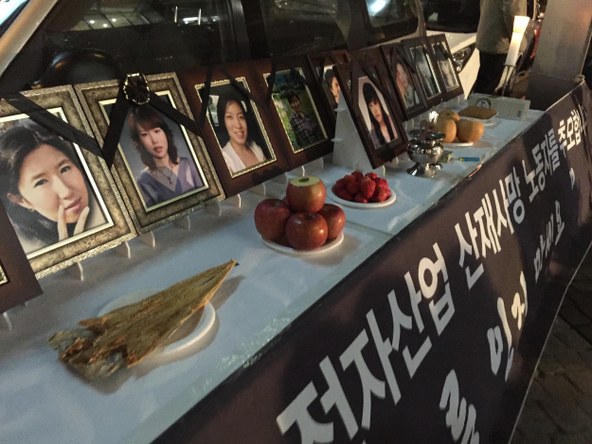 At a memorial in South Korea, mourners display photos of young women who have died.
Korean women who work in the electronics industry have a significantly high risk
of reproductive problems and other health issues.
Photo: Sandra Bartlett for Reveal

Last year, Samsung publicly apologized and promised to compensate sick workers and the families of those who died. But the company didn't acknowledge that the work environment was responsible.

Samsung is keeping its manufacturing process a secret even as its expansion grows in new countries such as Vietnam.

THE LONG TALE OF THE SHORT-HANDLED HOE
We take a look back at a historic battle over workers' rights in California. It all started in "the salad bowl of the world" – aka Salinas Valley – and the fight was over a simple tool: the short-handled hoe.

This smaller hoe looks like a standard gardening tool, but workers had to bend over pretty far to use it. Doing that kind of work for 12 hours a day caused debilitating and permanent back damage for those tasked with maintaining huge fields of vegetables. 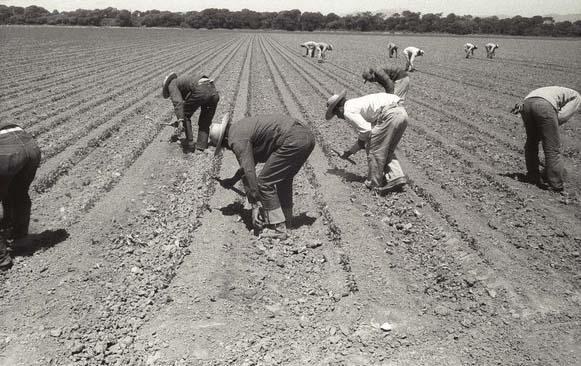 To use the short-handled hoe, field workers had to bend over and
stay stooped in order to move on to the next plant.
Photo: Leonard Nadel/Bracero History Archive

This short hoe – or cortito in Spanish – became a symbol of cruelty, oppression and literally back-breaking labor. That is, until a lawyer in the early 1970's took on big ag, and the story of el cortito was heard before the California Supreme Court.