From the late 1950s to the late ‘60s, Angelenos looking for music, dancing and rides, found the party at Pacific Ocean Park.

The beachside theme park – that jetted out into the Pacific – sat on 28 acres of land at the border of Santa Monica and Venice.

It featured rides created by Hollywood set designers, setting it apart from the standard, ordinary rides at Santa Monica Pier.

The two chronicled the park’s beginnings and endings – and its futuristic, cutting-edge design that made it so popular.

They spoke to KCRW’s Steve Chiotakis. 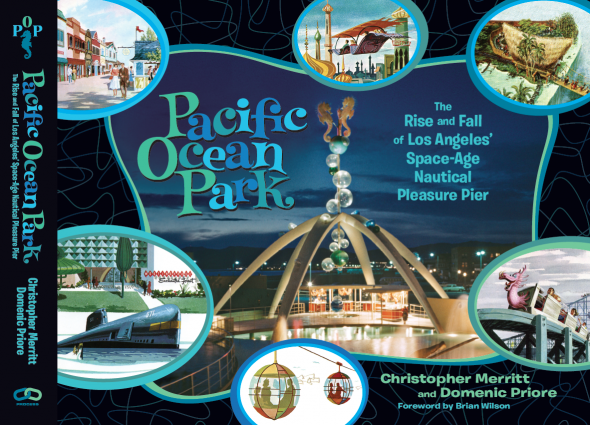 “This was a full blown theme park,” Merritt said. “There were carnival-type attractions, but there were a lot of very high-end, super-stylized, designed by motion picture art director theme park attractions, that were built and designed to take on other Southern California parks like Disneyland and Knott’s Berry Farm.

A young boy stares in awe at the Banana Train. Manufactured by Arrow Development, it pushed rather than pulled the guests through the unique attraction.

Pacific Ocean Park was also a place to see live music.  The Aragon Ballroom – which had been around for decades – brought in bands from all over the world, from Frank Sinatra, to Harry Owens and his Royal Hawaiians, to Lawrence Welk, to later groups such as Pink Floyd, The Byrds and Janis Joplin.

The musicians who performed at Pacific Ocean Park were reflective of the time, and of a changing America.

If Pacific Ocean Park’s history is of coastal development and competition, its postmortem is practically the same.

The city of Santa Monica decided to redevelop the area. Beachfront condos replaced the bungalows across from the park. Streets leading to the park were closed, causing attendance to plummet.

The city and the park’s creditors sued the park’s new owner to collect overdue rent and taxes. Pacific Ocean Park closed down for good in 1967, only nine years after it opened.

And its afterlife turned hellish.

“It sits there, from 1967 until 1975, rotting, burning, catching fire, falling apart, while the cities of Santa Monica and Los Angeles argue over who’s responsible for tearing down this eyesore,” Merritt said. “So all the kids in Venice are running through this incredibly unsafe environment. It looks like a war zone at the end.”

Riders look up with riotous laughter at a cannibal menacing them from his hut above.

Eventually what was left of the park was demolished completely.

The condos are still there, overlooking a playground and a bike and walking path that meander the old footprint.

The park however, is just a memory of a brighter time.

“There’s an overall sociology to this kind of park in the ‘50s in Los Angeles, where we had an idealism and optimism in L.A. at the time, and in America as a whole, that faded away with the coming ‘70s,” said Dominic Priore. “So these are things we try to recapture now that we can fix things again. It’s really a preservationist-oriented book. We’re trying to show how beautiful things could be, rather than accepting the lowest common denominator. This was a highly designed park because people had that kind of optimism, and we need to start saving places that are really good.”