Kienholz before LACMA at L.A. Louver On a recent trip to New York, I went to the Museum of Modern Art, naturally. There was gallery dedicated to assemblage and a didactic panel on a groundbreaking 1961 exhibition that included many of the artists whose work is now on view at the museum: Niki de Saint-Phalle, Jean Tinguely, Kurt Schwitters, Robert Rauschenberg and so on. Conspicuously absent is any mention of the L.A. artists who were included in that exhibition since they are not part of MoMA's permanent collection. L.A., however, has produced some of the most significant artists to have worked in assemblage, most notably Ed Kienholz. 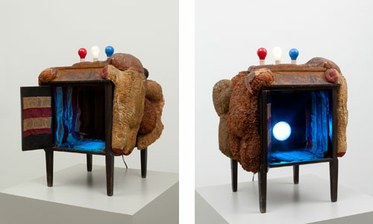 Kienholz is celebrated elsewhere, however. The warm reception that European museums have given to L.A. contemporary art continues. The Getty's Crosscurrents show of LA art opens at Martin Gropius Bau in Berlin in March with an additional large scale work that Kienholz made while he lived in Germany. A traveling Kienholz retrospective opens at the Museum Tinguely in Basel. Closer to home, there is a small, museum quality exhibition at L.A. Louver Gallery in Venice organized in collaboration with Maurice Tuchman, the curator who arranged Kienholz's politically charged retrospective at the L.A. County Museum of Art in 1966. Kienholz Before LACMA: Works from 1957 to 1964 traces the artist's evolution from abstract painter to creator of inventive sculptures comprised of everyday objects, work that hasn't been seen for decades though six of the pieces were in his first retrospective. 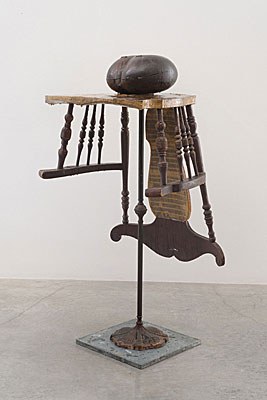 Kienholz, co-founder with Walter Hopps of the well-known L.A. gallery Ferus in 1957, had virtually no training as an artist. He was raised on a farm near Fairfield, Idaho and knew nothing of museums let alone an art scene. Yet he helped establish one. He was a beat, a rebel and inspired raconteur, a teller of tall tales. That narrative impulse made it into his art at a time when abstract painting was dominant. His sculptures were assembled from the detritus of everyday life: mannequins, old tv sets, taxidermied animal parts and dolls. America, My Hometown is a little cabinet topped with electric lightbulbs gleaming red, white and blue and lined inside with the stripes of the flag. But the outside of the cabinet is covered with teddy bears that seem to be clinging to it like a life raft, their faces actually melded to the surface as though they are becoming one with it. It was made in 1963, the same year that Andy Warhol showed his silkscreens of Elvis at Ferus and that Marcel Duchamp had his retrospective in Pasadena. In other words, a great year for contemporary art in L.A. and Kienholz was a big part of it. Often his narrative veered towards the erotic. The L.A. County Board of Supervisors tried to shut down his 1966 retrospective, outraged by Backseat Dodge '38, an old car with the door open to reveal a couple in flagrante. Surprisingly, they did not prevail and the publicity helped solidify Kienholz's reputation. This fascinating show documents his early evolution. It continues to March 3, 2012. 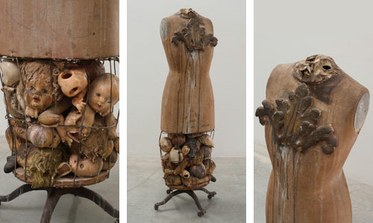 END_OF_DOCUMENT_TOKEN_TO_BE_REPLACED
KCRW’s Season of Giving Back – KCRW fans Ashley, Matt, Wyatt, and Marlowe Kline challenge YOU to donate to KCRW TODAY. If we can raise $12,500 they will match it!
Give Now
Give Now!