Pacific Standard Time has subsidized a number of exhibitions that revisited the political and social ideals of the 1960's and 70's but one of the most dramatic examples is the recreation of the Peace Tower on Sunset Boulevard and Hilldale Avenue, just west of Hustler, in a fenced vacant lot in West Hollywood. Mark di Suvero, a sculptor of great international renown, built the silvery armature, which has three rods that come together with a circle at the top, an abstracted emblem of a peace sign. It is hung with a number of signs offering protests of all sorts, many with an "Occupy" theme. This is the recreation of the Artists' Tower of Protest or Peace Tower erected on Sunset Boulevard near La Cienega Boulevard in 1966 by di Suvero, Irving Petlin, Arnold Mesches and other artists to protest the Vietnam War. 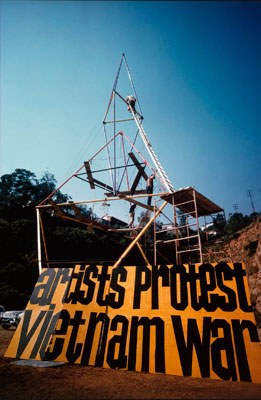 As that tower was being built by di Suvero -- in a wheelchair after a crippling 1960 accident --  Judy Chicago, Lloyd Hamrol, Melvin Edwards, even members of Ken Kesey's Merry Pranksters who were helping, found themselves threatened and assaulted by soldiers, veterans, even the police. The tower required 24-hour security to prevent vandals from destroying it. Inspired by the Watts Towers, it was di Suvero's first sculpture of such architectural scale and it transformed subsequent work. Some four hundred paintings were contributed by L.A. artists who hung their work on the tower but by New York artists like Frank Stella, Roy Lichtenstein and Robert Rauschenberg. After three months, the works of art were sold and the proceeds used to subsidize more anti-war protests. On February 26, 1966, the day of a large protest at the tower, Petlin received telegrams of support from Jean Paul Sartre, Simone de Beauvoir and others intellectuals. Susan Sontag gave a speech.  However, the new tower, erected by LAX Art's curator Cesar Garcia as part of PST, seems to have generated little reaction. Not even an Occupy moment. Read Jon Wiener's commentary in the L.A. Times.