The California-Pacific Triennial at OCMA You've heard of biennials, those group exhibitions hosted every two years, but the Orange County Museum of Art is giving itself more time to consider its offerings by holding one every three years, a triennial with as focus on art made along the West Coast but also in Latin America, Asia and Australia. The California-Pacific Triennial opens to the public on Sunday and continues through November 17.

This is the first big show organized by OCMA's new chief curator, Dan Cameron, who came to the museum in early 2012, and he is well suited to the task having organized large shows in Spain, Turkey and China over the years. He was senior curator of the New Museum in New York from 1995 to 2005 and, after that, director of Contemporary Arts Center of New Orleans for three years. All this to say that he has developed a broad-minded approach and his selection for this show reflects that. Some work is overtly political, some covertly so, some pieces determinedly aestheticized, others grounded in theory. The show is multi-generational and includes 32 artists from 15 countries. 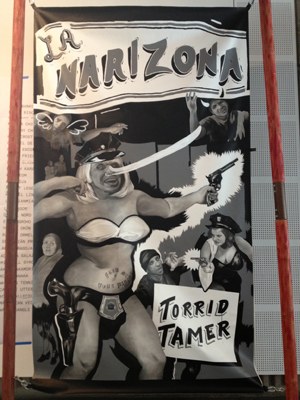 Upon entering the museum, you are confronted by canvas panels supported on rough wood poles by Tijuana's Hugo Crosthwaite. One features La Narizona, whose nose grows with each lie that she tells, but this fearsome lady is a border patrol officer outfitted in a bikini with a face resembling that of Arizona governor Jan Brewer.

Mark Dean Veca, the Los Angeles artist known for his cartoonish paintings, outdoes himself with "Pete's Palace," his pop rendition of Saint Peter's Cathedral with a gold naugahyde bean bag chair to seat the Pope.

The entrance gallery is elaborately painted in a blue and gold Chinoiserie wallpaper pattern of Asian figures in a landscape by Michael Lin, of Shanghai. It underscores the idea of cultural interchange along the Silk Road, the ways in which Asians and Europeans traded more than goods. 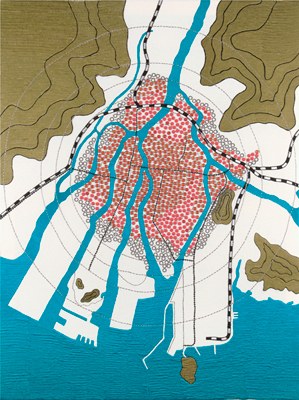 Japanese ceramist Akio Takamori, now in Seattle, showed squatting female figures with their dresses lifted above their knees performing some private business. Saigon's Tiffany Chung presented her meticulously beaded and embroidered aerial views of Hiroshima and other areas of political turmoil and destruction. Mexico City's Gabriel de la Mora's canvas ceilings taken from deteriorating housing are presented as paintings. His installation of the worn soles of men's shoes and Honduran artist Adan Vallecillo's wall of rubber squares made from patched and worn inner tubes both find poetic and poignant nuance in impoverished circumstances. 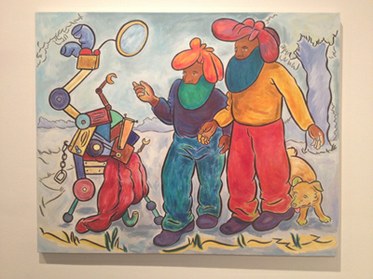 The show is not only about cross-cultural connections. LA artist Danial Nord's installation updates notions of light and space. In a darkened room, a suspended track of colored LED lighting bears several doors open to the ceiling while a sound track plays the crashing, smashing endings to a number of action films. No meditation chamber here! Whiting Tennis of Seattle has covered a wall with his modestly scaled paintings and reliefs indebted to both vernacular forms and early modern abstraction while Bruce Bischoff, living in LA, photographs himself performing with fabrics in a manner that becomes largely abstract and hauntingly gorgeous. San Francisco's John Bankston offers paintings of Rockwellian Americana populated by black figures engaged with quirky colorful machinery. 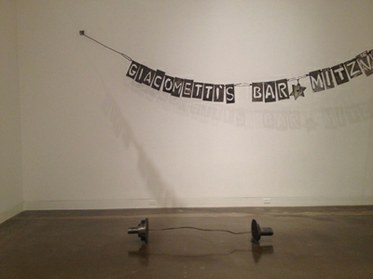 Mitchell Syrop, a mid-career LA artist known for using language in his work, shows a remarkable series of cast steel wall pieces including a metal banner proclaiming "Giacometti's bar mitzvah." Making me think, what? While a big name from the 1960's in Mexico City, Pedro Friedeberg, is represented not only by one of his well-known gilded chairs in the shape of a hand and foot, but also his psychedelic Escher-inspired paintings. 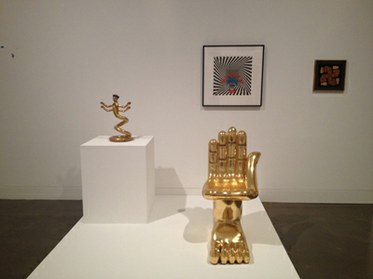 Pedro Friedberg, Installation of chair and other pieces

By the way, I have listed these artists by the areas where they now live and work but their backgrounds are often more complex, testament to the uprooted life of today and its connections to varied and changing histories.

Obviously, there is much more to the show as well as a number of other shows and events off-site including a panel discussion with some of the artists conducted in Spanish only at the Yost Theater in Santa Ana. It is already sold-out. For more information, go to ocma.net.