Clifford Moore with his mobile camper on the Venice Boardwalk. Photo by Avishay Artsy/KCRW.

So how about now?

In 21st century LA, people are living in tents, cars and RVs; in boats and tiny homes; in ADUs or midsize, multifamily blocks by rail-lines and freeways; in lofts with rooftop swimming pools, luxury high-rise downtown towers and colossal houses in the hills.

Each in their different way is a response to today’s reality: a massive housing crunch, a web of constraints on construction and a ceaseless flow of people wanting to live here.

DnA explored all of this in a series called “This is Home in LA: from the Tent to the Gigamansion (and everything in between).”

We explore whether these options are sufficient to meet today’s needs -- and tomorrow’s. Can the region still claim to be a laboratory for residential design ingenuity? Can it once again provide a place called home to people of all income levels?

Our first episode in the series started small -- with the cheap modern dome tent, now a common sight on LA’s streets, beaches and riverbeds.

Wade Graham explains how the invention of the modern dome tent by Buckminster Fuller devotees enabled the spread of tent-living in the city.

“There's a supply chain, you can get one anywhere in any homeless encampment; you can get a two person, a four person, an eight person, they have rooms in some of them and vestibules and foyers and storage". 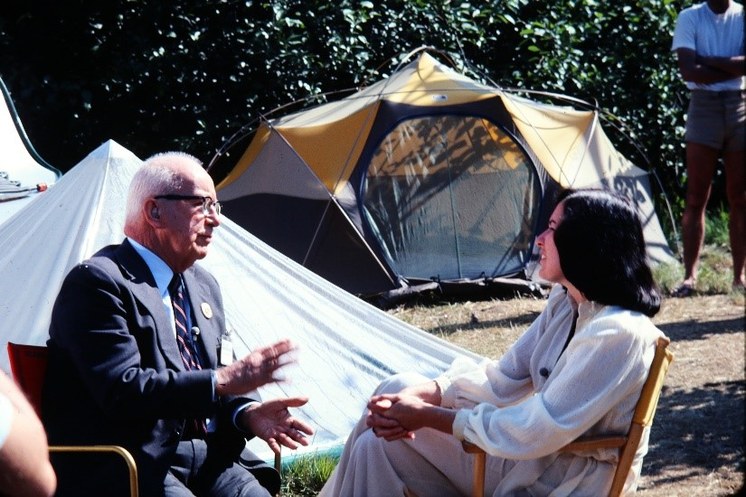 Buckminster Fuller designed the first “Oval intention” in 1975, based on the geodesic dome, the precursor to the modern dome tent.

The mobile structure designed originally for extreme environments, like a base camp on Mt. Everest, is a “lightweight, unbelievably strong, mobile, flexible, cheap, mass-producible” form of shelter that offers lessons to the designers and builders of permanent housing in LA.

The latter is, in Graham’s view, “extraordinarily expensive” due to zoning codes requiring “pretty excessive amounts of space for an individual” and “building codes that require a really heavy duty, rigid, expensive way to build.”

But what is tent-living like for the 50,000 or so homeless people in LA County?

DnA producer Avishay Artsy goes to the Venice boardwalk and “Skid Rose” on 3rd Avenue in Venice to find out. 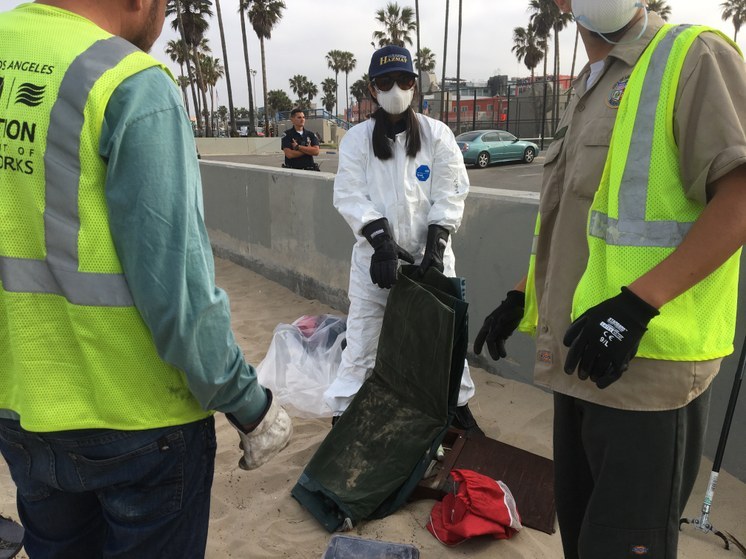 Workers with the LA Department of Sanitation confiscate a homeless person’s belongings on the Venice Boardwalk. Photo by Avishay Artsy

He attended a “sanitation sweep” in which LA police and workers from the city’s Department of Sanitation crack down on what they call the storage of personal property in public areas.

Homeless people are given 60 gallon plastic bags to fill with their belongings. Whatever doesn’t fit is put in a garbage truck and brought to a downtown facility, where it’s stored for 90 days. People need to wade through a mountain of other people’s belongings in the hope of reclaiming their possessions.

The city is looking to crack down on homelessness around the sites of proposed emergency shelters. LA Mayor Eric Garcetti’s $20 million “A Bridge Home” program seeks to put temporary homeless shelters in every council district in the city, including one in Venice. The shelters would offer supportive services as well as bathrooms, showers and security.

Women in particular say that a tent ensures their safety.

“A tent means that, number one, you're not sleeping on the concrete. Number two, nobody can see whether it's a man or a woman. So you have that extra added security against rape. Because rape is really, really threatening thing when you're a woman, you're homeless and you're sleeping on the sidewalk,” said Mary Nolan, who goes by the name “Grandma.”

The sanitation sweeps and early-morning wake-up calls from the police have led two enterprising young homeless people to create a rather innovative workaround. Clifford Moore and Billy Young have built bike trailers with campers on the back.

Using plywood and corrugated plastic, they built homes on wheels. “Micro-living,” as Moore puts it. They park their bike trailers in handball courts, library parking lots, side streets and bike paths.

Moore says each of these mobile campers only costs about $200 in materials, built just using a drill and some hand tools and constructed in a Home Depot parking lot. On the outside they've attached tarps to keep the light out.

Home in LA, from the tent to the gigamansion