Sterling Ruby, at his studio in Vernon. Photo by Frances Anderton/KCRW

If you’re driving from LA, you will not miss one of the brightest blooms of them all: a vivid orange box, called Specter. It’s by the artist Sterling Ruby for Desert X, the exhibition of site-specific art in the Coachella Valley.

Many of the artworks at Desert X explore big themes, like climate change or class division. Ruby’s orange installation does too -- in a more oblique way. It references, perhaps, his longtime preoccupation with the penal system. But primarily Specter is a sensory experience, a glowing form in a fluorescent orange that has proven impossible to catch on camera.

“It's this strange alien object,” says Desert X director Neville Wakefield, adding, “It relates perhaps to pieces made by McCracken and this idea of the intelligent object.” 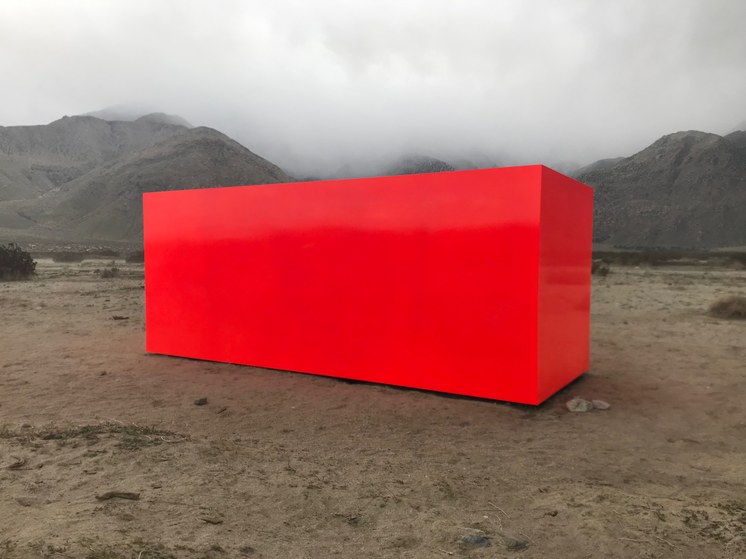 Sterling Ruby’ Specter changes character with the weather at Desert X and its fluorescent orange is very hard to capture on camera. This photo by Frances Anderton was taken during a rain and sandstorm in February 2019

DnA spoke to Sterling Ruby, and he explained that the concept evolved out of ideas that he had been testing for a long time.

“For the past 10 15 years I’ve worked with that color orange, mostly in collages and paints and paper. But I wanted to see what would happen when we used that orange safety orange... you know I grew up in rural Pennsylvania so that orange for me was always always associated with hunting season.

DnA, whose team produced the Desert X podcast, from which this interview is excerpted, met Ruby at his vast studio in Vernon -- four acres of property containing separate studios for textiles, painting, collage, ceramics and outdoor sculpture.

15 to 20 people support Ruby in his prolific output, where the emphasis is on the handmade.

The artist tells DnA his work has its roots in his childhood, of hippy parents living alongside Amish people where making, sewing, working with wood, building and laboring were highly regarded.

But, he says, on being taught to sew by his Dutch mother, “I also started to realize later on that they also all associated themselves to a very specific gender and these were kind of codes in the community that I grew up with that you didn't break from.

Later on however he realized that these things had been very experiential for me, “but I didn't know it at the time. Growing up where I did a lot to do with, you know, how we make things. My understanding of how to build things, my understanding of materials, stuff like that.”

Make or break for LACMA redesign; Sterling Ruby on Specter