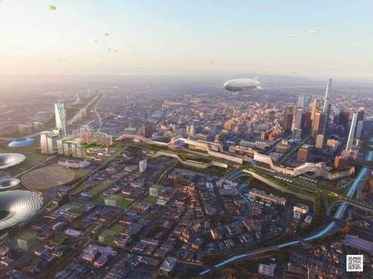 L.A.'s growing public transit system includes new plans by Metro to develop 38 acres of land surrounding Union Station into a mix of commerce, housing, terminus for the regional connector and—potentially—the high speed rail. Metro has been searching for a master-planner to come up with a vision for the site and invited a group of six high-level teams, including Italy’s Renzo Piano and Britain’s Norman Foster, to compete for the project. Yesterday, Metro planning staff posted its recommendation for the master-planner, a choice that has to be approved by the board later this month. It’s the team of L.A.-based Gruen and British firm Grimshaw, designers of the Fulton Street Transit Center in New York. Sam Lubell, editor of the West Coast edition of The Architect's Newspaper, talks about why this challenge is being faced in cities around the world, and how the winning team is a good choice for Los Angeles.

Networks, Connections and a Sound Booth for Sonic Trace

Knitting a 'Screenplay' for Dwell on Design

Journey to the Center of the Internet

Design and technology writer Andrew Blum was working away at his home in Brooklyn one day when his Internet connection was lost—something that happens to all of us more than...

Slide show of all submissions for the Sonic Trace sound booth competition Click to view FULL SCREEN, then SHOW INFO, this way you can view information about the submissions...