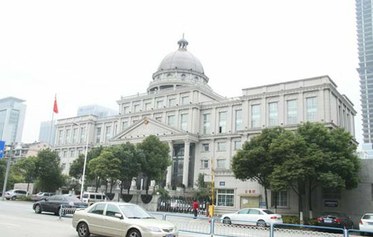 The term "contemporary Chinese architecture" conjures up imagery of hyper-modern steel-and-glass showpieces like the CCTV building designed by Rem Koolhaas or the Bird’s Nest constructed for the 2008 Summer Olympics. But, for patrons who can afford it, a very different kind of new architecture is currently being constructed in China—buildings that look like they were transplanted from a Parisian arrondissement or an Austrian village. Tech writer Bianca Bosker spends time in China researching the country's architectural nostalgia and has just published a book about her findings entitled Original Copies: Architectural Mimicry in Contemporary China, which explores this concept of "duplitecture."

The copying mania in China is not embraced by all architects there. Some, like last year’s Pritzker Prize winner Wang Shu, are on a quest to create buildings that draw on Chinese traditions while being unabashedly modern. That’s according to Qingyun Ma, head of USC’s architecture school, who explains the dilemma the copycat architecture presents to the Chinese intelligentsia. 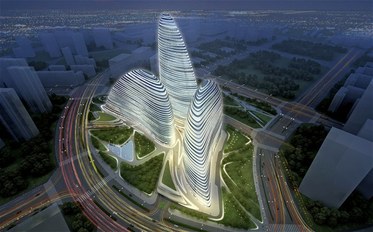 A rendering for the Wangjing SOHO in Bejing designed by Zaha Hadid, which is currently being copied in Chongqing

But it's not just traditional architecture that's being copied. In Chongqing, a knock-off of a Beijing building designed by Zaha Hadid is actually being built faster than the original. And, in one of the more famous examples of Chinese copying, Apple found that its stores and branding had been duplicated so convincingly in China that people working in the fake stores thought they were Apple employees. In a bid to try and thwart this kind of copying both at home and overseas, Apple has managed to trademark the design of its stores. The trademark includes "a clear glass storefront surrounded by a paneled facade" and, within the store, an "oblong table with stools... set below video screens flush mounted on the back wall." Marissa Gluck follows piracy issues as an advisor to new media and design companies and explains the difference between trademark and copyright protection.

Top image: One of many White House-inspired buildings in China, photo by China Daily

The term "contemporary Chinese architecture" conjures up imagery of hyper-modern steel-and-glass showpieces like the CCTV building designed by Rem Koolhaas or the Bird’s...

California's Modernist architecture might be L.A.'s most famous export and one of the movement's largest celebrations, Palm Springs Modernism Week , happens right here in...