In the boom years of the last century, Los Angeles developed homes that were specific to the region, the culture and the economy. These include revival-style homes, bungalow courts, garden apartments and dingbats.

Now we are in the midst of another LA building boom. But are we producing homes that are distinctively Angeleno? Yes, say some and it might take the form of cool, multifamily apartment buildings that creatively tweak a generic building type.

Author and historian DJ Waldie posed this question to DnA: “what is that characteristic form for Los Angeles today? We have accessory dwelling units. We have tiny houses. We have fantastical mega mansions. But among all those forms that are being built now, what is the characteristic Los Angeles house?”

Historian and USC librarian Ruth Wallach says there is a contemporary archetype and you can find it in 5 to 7 story blocks of residential over parking and commercial on or near major streets across the Southland.

She describes it as “that Bauhausian type of modernism of plain facades and ribbons of windows. They're rectilinear. There are plain facades. Sometimes there is color to kind of provide a variety. And then there is a lot of glass.” 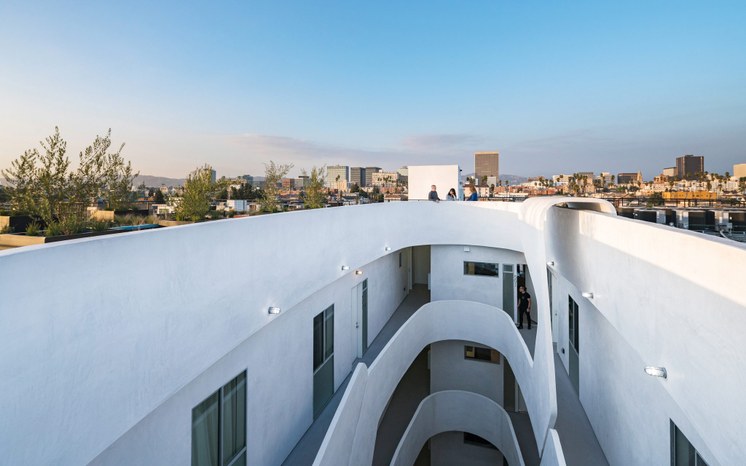 These buildings seem similar and often bland because they are all built of a construction type nicknamed “5-over-2.”

In the fifth episode of our series “This is Home in LA: From the Tent to the Gigamansion (and everything in between),” DnA looks at this this typology and finds that some designers are making it special, so special that for some residents it’s a preferred alternative to the LA dream of a single family home.

“It's two levels maximum of type 1 construction, which is concrete, so formed in place. And then up to five levels of Type 3 construction, which is a fire-rated or fire-treated wood system,” said Scott Parker with the architecture and urban planning firm Studio One Eleven. This form, he says, “gives you a not-high-rise construction and it gets you to seven stories, which sort of maxes out the economic return on investment. And you can do it very efficiently and cost effectively.”

Parker cites a building by his firm, Domain in West Hollywood. Its six stories of market-rate, one-, two- and three-bedroom units over ground level stores and offices, with swimming pool and roof deck, featuring International style rectilinearity and splashes of color. But, they added a twist.

The “5-over-2” is the architectural equivalent of the 1960s-era dingbat apartments, says Alan Pullman of Studio One Eleven.

“It's denser than what we did before. But like the dingbat, it's a kind of archetype. And the building code dictates so much of this building that it leaves the designer with just tweaking the edges. Eighty five percent is already done based on the… International Building Code,” Pullman said, adding,“people really complain about it as this generic kind of architecture. I've heard it called ‘fast casual’ architecture.” 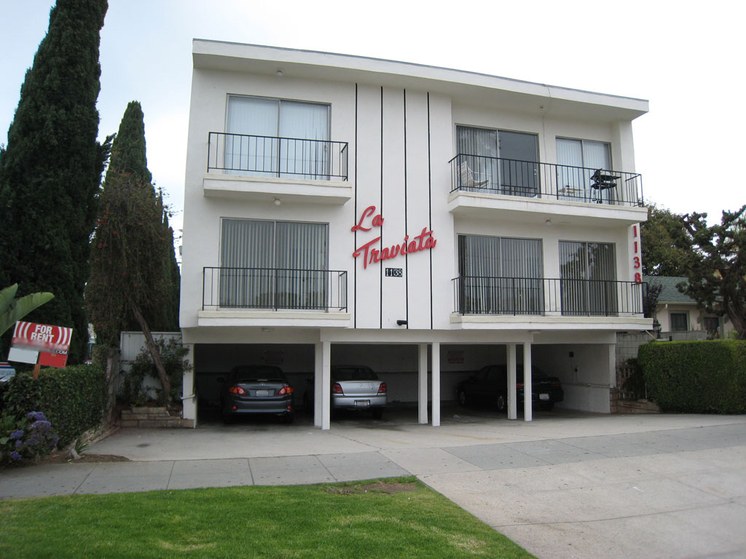 This generic kind of building is one that LA’s new Chief Design Officer, Christopher Hawthorne, says he’s thinking about.

“I'm really interested in looking at that formula, that collection of recipes that come out of various city requirements and thinking about how it can be tweaked to promote better architecture, because that's really what shapes the architecture of most of what is being produced by private development,” Hawthorne told DnA.

While the city works on tweaks, some private developers are already tweaking the formula. You can find an example in Koreatown, at an apartment building called Mariposa 1038. DnA recently joined a group of residents for drinks on the roof.

“I've always thought of roofs as being the most active space conceptually, because it allows opportunities for people to come and sit and hang out and communicate,” said Lorcan O’Herlihy, the architect of the building.

Taj Stansberry, Sophia Chang, Jonathan Schkolnick and Jonathan Chia are among a group of designers, filmmakers and photographers who were drawn to the building and now call it home. They appreciate the communality of the design layout, the open balconies and shared roof garden, as well as the thoughtful sourcing of light.

“What Mariposa 1038 really offers is architecture. And even today this morning when I woke up in the bedroom and we have a certain type of lighting that hits the room. I was like, ‘I'm so happy to be here,’” Chang said.

“It is my home. Yeah. You want to come back here,” said Stansberry. “It's a great place to create, and you don't feel like a hermit here. You just feel like you're at home.”

O’Herlihy has garnered a reputation for distinctive-looking condo and rental apartment buildings that maximize liveable interior space and shared open areas, like rooftops.

“I'm always intrigued about having an opportunity to meet people who are living in the buildings I do, because this is why I do it. It's about the people who are living here and I'm always thinking about, through the design process, how to create an environment that's uplifting, that's inspired, that in a sense gives you a place of not only a home but also a place where you look forward to coming back to, and also helps to inspire you,” he said. 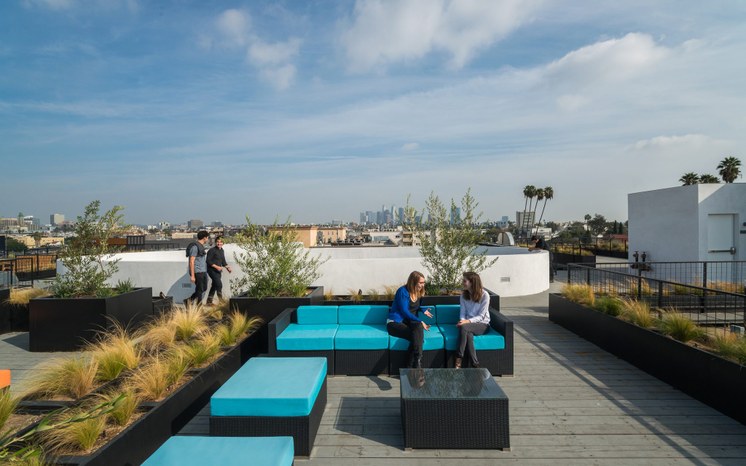 A view of the rooftop of Mariposa 1038. Photo credit: Paul Vu.

The architect also played with the four sides of the Mariposa 1038 block. He pushed in each to make curving walls. Then he added overhangs for shading, balconies and sharp black and white detailing.

All of these special features added construction costs and lengthy waits at the planning department for approvals.

The market-rate apartments range from $2600 to $3600 for one or two bedrooms. And the building is currently full.

Sitting on the roof of Mariposa 1038, drinking rose with a group of dynamic Angelenos, enjoying the spectacular view, you get a taste of the new architecture that’s emerging to house the new Los Angeles lifestyle.

It’s “fast casual” but when it’s done thoughtfully it can be a new version of the LA dream.

The one in which you don’t actually own a home but you have a home that still embraces the outdoors and the big LA sky, and that is still modern in spirit.

“We know that in the early years the patrons of architects were people living on hillsides and hiring architects to design these individual houses. Whereas I'm convinced that the new patrons... are intrigued about building multifamily or larger housing complexes in urban environments, infill projects which is all throughout Los Angeles. So this building represents that new culture of Los Angeles,” said O’Herlihy. 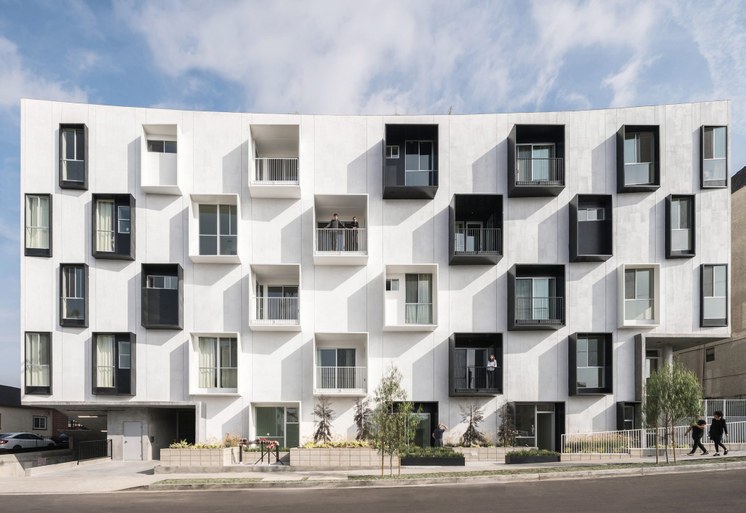 In the boom years of the last century, Los Angeles developed homes that were specific to the region, the culture and the economy. These include revival-style homes, bungalow...