Living above the store 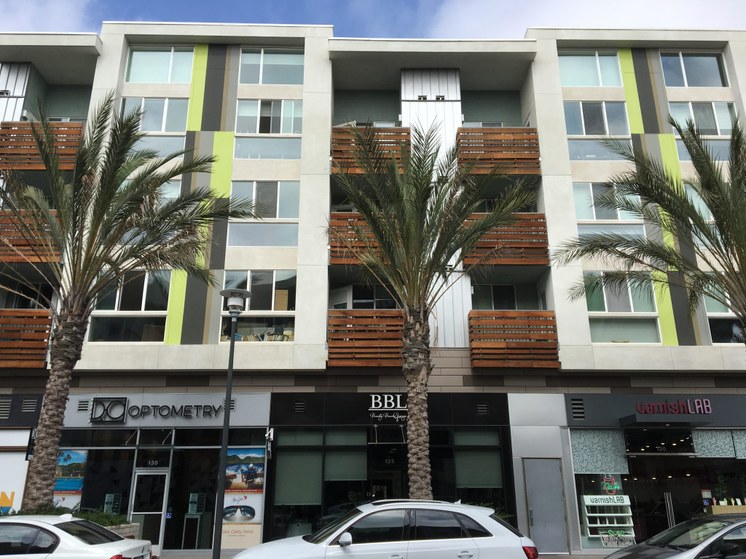 In Los Angeles, if you want to go shopping, you typically have to get in your car.

But more and more, home and retail are being mixed in shopping and living destinations like Americana at Brand in Glendale, the Paseo in Pasadena, or Runway at Playa Vista.

Laura Mitchell Wilde lives in a corner unit over shops on Millenium Drive. This is part of Runway at Playa Vista, the commercial heart of Silicon Beach. It opened for business around three years ago and has 217 apartments.

“I don't leave Playa Vista very often because almost everything is here,” she said.

She jokes that she refers to Playa Vista as Pleasantville.

“You could walk around with your windows up and notice people walking down the street with their dogs, their children, nodding at each other and it's just this thing that happens that is very slow and very almost movie-like,” she said. 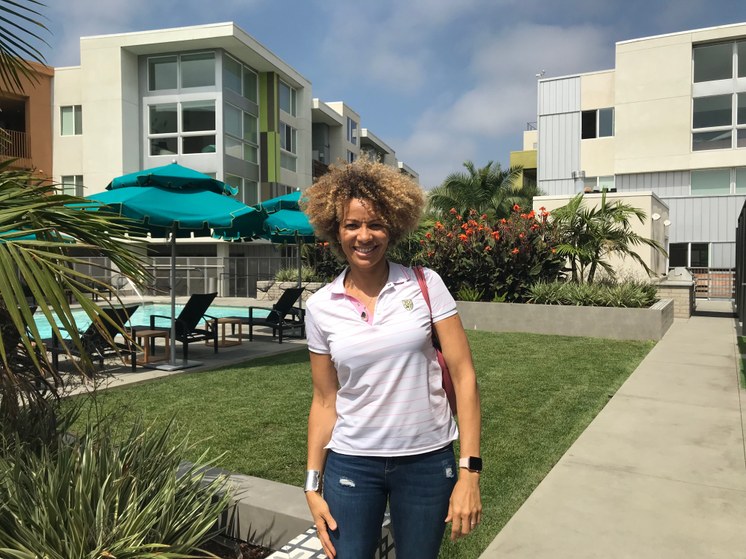 Laura Mitchell Wilde lives at Runway at Playa Vista, a residential/retail development she affectionately refers to as “Pleasantville.” Photo by Frances Anderton.

Besides the amenities like swimming pools on the roof decks, tenants have private parking below. So the concept combines urban and suburban lifestyles.

“In a way it's an old paradigm, but in a city like Los Angeles, full of commercial strips, it's a paradigm we haven't really embraced here. I mean, I suppose European villages going back far enough had the family which controlled the store and lived on the top. These are living over the store but it might not be your particular store that you're living over,” said Scott Johnson, co-founder and design partner of Johnson Fain, the firm that designed Runway.

Playa Vista sits on former wetlands, and the longtime headquarters of Hughes Aircraft Company. If you haven’t been inside the community, you might know it only by its walls of rather generic-looking housing that line Lincoln and Jefferson Boulevards.

Around 30 years ago, owners of the land and their designers started visualizing Playa Vista as a “New Urbanist community.” That is, a walkable, work-live neighborhood with parks, human-scale roads and sidewalks and traditional architectural styling.

Environmentalists and developers fought for years, and there were several changes of ownership, of design teams and of vision, resulting in a similar heights throughout Playa Vista, but different architectural styles.

Runway at Playa Vista is quite mod looking with dark-wood balconies and splashes of color over rectilinear white stucco forms.

“We sort of accepted the walkability, the Sustainable Communities that all seemed sensible to us but we don't really do traditional architecture,” says Scott Johnson. “So we were interested in doing architecture in our own time which meant contemporary.”

Since it was completed three years ago, the managers of the Runway at Playa Vista development decided it needed to lose the cars all together. And now the firm Design, Bitches is redesigning the streets at Runway for pedestrians only.

“I think the changes, the pedestrianisation, the kind of retail tweaking, the amenities... I think that all has to change to to stay current,” Johnson said.

So, are these semi-urban destinations in LA, where you can live over the shops but park underneath, a kind of new archetype?

But what about LA’s actual streets, its commercial arteries with their rows of single-story shops? Why don’t people live above those?

Well, some do. Brett Shaw is an architect and general contractor in LA. He purchased a single-story office on Pico Boulevard in West LA in 2002, and recently he built an apartment for himself above.

“This is basically an architect's dream to build his own living space. And I didn't have a client so I had nobody to say no to me, just the budget requirements. So I just did things that I've always wanted to do in terms of high ceilings, bridges that span from one part of the space to another,” he said. 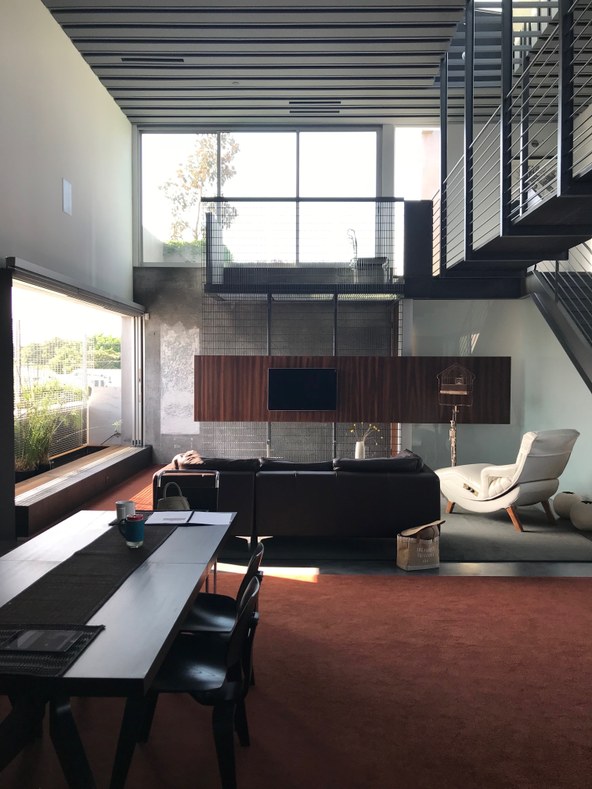 Brett Shaw’s loft apartment above a row of shops on Pico Boulevard in West LA. Photo by Frances Anderton.

From Brett’s loft you can look towards LA’s tree-lined hills and its single family homes and gardens and, staring at you outside the windows, you can old neon signs for Mattress King and Pico eateries like Don Antonio’s, and billboards.

So how did Shaw pull it off?

As usual, parking was an issue. But in this case, because the building is from 1956, says Shaw, he didn’t need to add extra parking spaces.

There were some other challenges, however. Many commercial buildings weren’t built to withstand the weight of additional floors, so the walls needed to be reinforced.

Brett spent close to a million dollars on the project.

In LA residential above commercial has not been the norm, for many reasons, including pushback from single family neighborhoods. Residents have voted to limit development on their nearby arteries.

We are going to see more of it, however, in targeted areas near transit hubs as the city tries to incentivize construction of housing.

“If you look at all the cities across the world, they all have two, three, four stories on their main arterial streets. So I think it's just a matter of time,” Shaw said.

YOLA in Inglewood, living above the store

Last week the LA Philharmonic’s Youth Orchestra Los Angeles, or YOLA, unveiled the model and renderings for a brand new concert and rehearsal space in Inglewood, designed by...

Living above the store

Runway at Playa Vista features 217 apartments located over businesses. Photo by Avishay Artsy. In Los Angeles, if you want to go shopping, you typically have to get in...