What’s the difference between crispy and crunchy? It’s all about the sound, says Brette Warshaw. Photo courtesy of Shutterstock.

Hot cocoa vs. hot chocolate. Corned beef vs. pastrami. Aioli vs. mayonnaise. What's the difference? Editor and writer Brette Warshaw has been asking that question in her newsletter for the past three years. She recently adapted its food inquiries into a new book, “What’s the Difference? Recreational Culinary Reference for the Curious and Confused.” Warshaw joins host Evan Kleiman to discuss the new work and set the record straight about some of the kitchen and grocery aisle’s most common headscratchers.

KCRW: How did your newsletter get started?

Brette Warshaw: “These questions have definitely been rolling around my head for a while, without even realizing it. Then I was once debating the difference between a sweet potato and a yam with some friends. And I realized that I actually didn't know the correct answer, which kind of disturbed me. And so I started thinking more about these types of questions and realized that people need to know the differences between these things. It's very important. So I polled some friends for some ideas and just started writing it. And it's now a book, which is pretty cool.”

I also get asked the yams vs. sweet potato question a lot. I think that’s the biggest one.

It's a completely different plant. It's more related to grasses and lilies rather than the sweet potato, which is more related to the morning glory family. Yams are more prevalent in African, Caribbean, and South American cuisines, and they’re starchier than sweet potatoes. And so they're gonna actually have a more creamy texture and will be less sweet than the normal sweet potato. They're also huge, and they can grow to be like 100 pounds.” 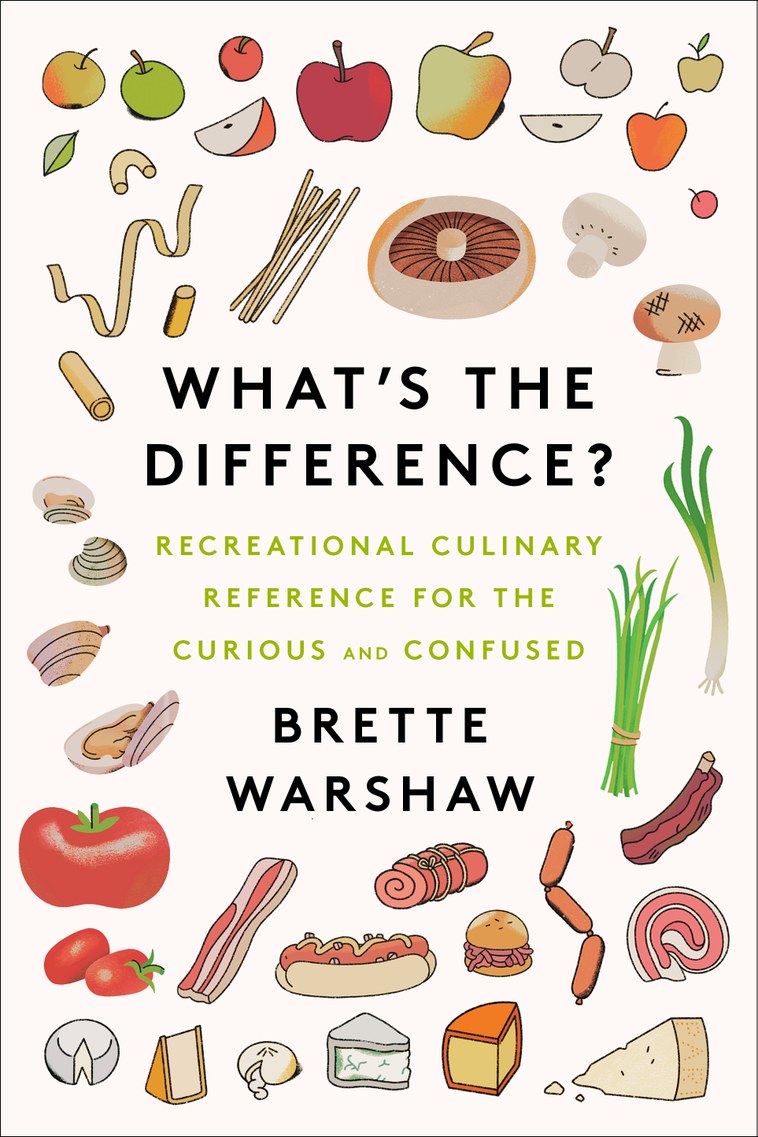 Editor and writer Brette Warshaw adapted the food inquiries of her newsletter “What’s the Difference?” into her latest book. Photo courtesy of HarperCollins.

What about Parmigiano Reggiano vs. Parmesan?

“With Parmigiano Reggiano, there's going to be a lot of really strict rules that you have to abide by to have it labeled as such. It has to be made not only in Italy, but within certain provinces in Italy. And the only ingredients are cow's milk, salt, and rennet, which is an enzyme that helps coagulate the milk during the cheese making. And the milk has to be from skim milk from the evening before and whole milk from the morning that the cheese is being made. And the cows have to come from a certain place, and the wheels have to be a certain size. And then after that, each wheel gets tested by a committee that approves every single wheel. So that's Parmigiano Reggiano.

Anything that's labeled Parmesan in the United States, there really aren't a lot of rules around it. They have to be a cow's milk cheese that has a hard and brittle rind and a granular texture and a certain moisture content. But that's really it. And so the quality is definitely not there. And if you're using something that comes in one of those cans that says ‘100% Parmesan cheese,’ it's really not that. There's actually some other stuff mixed in like wood pulp and things like that. So you want to avoid that if possible.”

Let’s talk about crispy vs. crunchy.

“Crispy is what you would use to describe a food that is ‘dry and rigid.’ This is according to a scientific study that was done. And what I personally love is that the scientists describe the sensation as the food that is being bitten with the four pointy teeth at the front of your mouth. So it's something that's going to break easily, that you don't really have to use your molars for. It's going to be a potato chip, or something like that — that high pitched, crispy texture.

Whereas a crunchy food is more dense, and emits more lower pitch sounds. And you're going to be using your molars more. Think about those hard sourdough pretzels that you're really working in the back of your mouth. Those are going to be crunchy. And so it's really about the pitch of the sound that is emitting and also where in your mouth you're chewing.”