Tortilla Tournament 2020: How to Taste Tortillas For the return of KCRW’s Tortilla Tournament, LA Times columnist Gustavo Arellano and Good Food’s Evan Kleiman chat about what makes a quality tortilla. The pair had just finished eating corn and flour tortillas, respectively, after being in charge of the opposite brackets over the past two years.

*Four Tortilla Tournament finalists will face off live for a virtual celebration of all things tortilla October 18. RSVP here!

The following conversation took place via text messages between the two tortilla aficionados.

Gustavo: I am now getting what you long talked about when it comes to corn — you can TASTE the preservatives in the bad ones: Makes them bitter and disgusting.

Evan: Yep. Flour is different. I’m used to tasting some foods for defects but there were few in the flour. One over-salted or rancid fat. But overall better quality than the corn. And the corn goes so sour so fast.

Evan: A great tortilla from Guerrero?  Such a thing exists? When I’m tasting corn tortillas I want to taste the earthy sweetness of the corn without any sourness. And the texture needs to be supple when heated. Not chalky.

Gustavo: I meant CONTRAST to Guerrero, haha! GRUMA, the parent company of Guerrero, Mission and Calidad brands, now that there’s a renaissance with tortillas, they’re coming out with a bunch of different styles now. They all remain insipid.

The problem with most corn tortillas is that they’ll try to mess with perfection and add more ingredients than all that you need: corn, water, lime. Anything else immediately muddles up that corn flavor, which should always be earthy and the tiniest bit musky from all that wonderful corn.

Evan: It makes a difference when tasting corn tortillas heated on a comal vs. stove burners. A comal heats the disc evenly and more slowly so you get the nuances of the subtle flavors of corn.

Gustavo: Yeah, I never got why people microwave tortillas. All tortillas need direct metal heat to open up in flavor. So gorditas [thicker] or thin for corn?

Evan: I love both. For gorditas, I think freshness matters even more. I tear my tortillas and nothing beats a triangle of torn gordita scooping up a bit of lardy beans. But I always have thin corn tortillas for daily taco consumption.

Gustavo: You’re only going to get good thick, gordita-style corn tortillas made by hand. The exception for me is Miramar Tortilleria in East LA, my family’s favorite corn tortilla. They’re so yellow and thick — perfect for quesadillas or to sip stuff up. But definitely not for a taco. Thin ones are best for day to day consumption, like Kernel of Truth.

This year, you have flour. I’ve discovered that most great corn tortillas ultimately taste the same, but great flour tortillas taste WILDLY different

Evan: Once I got the taste of truly fresh well made corn tortillas I couldn’t ever go back. Now I’m very sensitive to that whiff of sour. Ick! My faves for the past year have been Kernel of Truth and Tehachapi yellow corn. I can’t wait to try what [KCRW tortilla judge] Connie Alvarez and you have been tasting this year.

And yes there is so much more variation to flour tortillas. I’ve found that the type of fat used as well as the amount of fat and the salt content makes such a difference in both flavor and texture. But overall, there seem to be many more really good flour tortillas out there. When I got to the last couple rounds of tasting, really it was more about personal preference than it was about defects, which was fun but made the judging more difficult.

Gustavo: This is why I love #TortillaTournament. Most people think of a flour tortilla, they can’t even muster up a flavor profile beyond bland. But in this year alone, you got those flaky Tex-Mex marvels from HomeState, super-thin Sonoran specialties from Sonoratown and El Ruso, those powdery ones from Jimenez Ranch Market in SanTana, and even some from good ol’ El Cholo from a recipe that’s over 100 years old. All different gradations of delicious.

You really do have more great flour tortillas in Southern California than corn. How do you like yours heated? 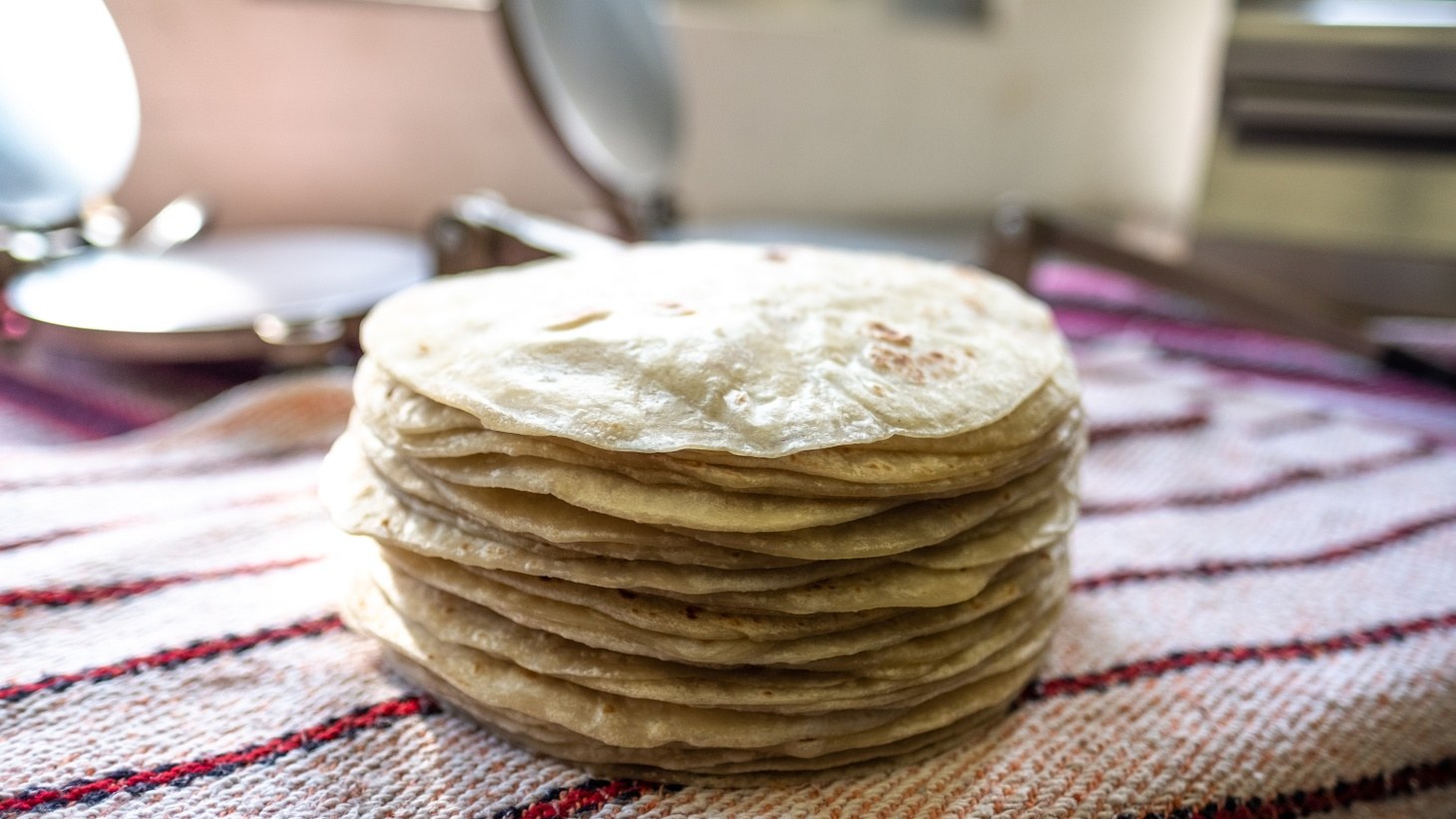 Evan: Again, I rely on the comal to reheat flour tortillas.  First of all, I love watching to see if they will puff up. That’s how you know how flaky they will be and that puffing ensures that the flour is well-cooked so you don’t get any raw flour taste.  You can control how much char you like too, unlike heating them quickly over a burner, which will pretty much char a tortilla faster than you think. I have a small cast iron comal that sits on top of the gas burner.  I never take it off the stove. hahaha

Gustavo: Are you secretly a Mexican? Well, you’re a native Angeleno, so you’re at least partly!

Evan: Growing up in Silverlake, adjacent to Echo Park meant that Mexican food was our default. It shaped my palate as a child in the same way that Italian food did later in my life. My desert island food is still tortillas and beans with raw jalapeños on the side.

Gustavo: BOOM. So what’s the importance for you of char on a tortilla? I don’t think it’s that important on corn, but it’s essential on flour for me. Just the tiniest bit — couple brown spots, but definitely no black. You still need to be able to roll it without shards chipping  off. Not only does it add texture, but you get like carbonized lard out of the best ones.

Evan: I am in complete agreement. But I must admit that when I accidentally char the corn tortillas because I didn’t use the comal I enjoy those as a warm leathery salsa scoop as a change from chips.

Gustavo: Quemaditas, we call them. Little burnt ones. They can be GREAT as long as you know how to heat a tortilla — but that’s a conversation for next year! Finally, how can people learn how to taste tortillas?

Evan: I think the best advice I can give about learning to taste tortillas is to just slow down and be present. It seems corny but often tortillas are a default quick meal delivery system and were just stuffing our faces. When you add even the tiniest awareness to the heating and eating, then you fully taste. Also bury your nose in the tortilla before you take a bite. Smell amplifies taste.

Gustavo: Just like bread. People respect bread so much, and tortillas deserve the same. I’ll add to taste them individually first, on their own. Then mix and match to what you eat. My family does Romero’s gorditas for regular flour, East LA’s Acapulco for burritos, and Miramar for all corn. There is no wrong answer when it comes to great tortillas.

And, of course, don’t buy anything GRUMA. Need masa? Go to your local tortilleria. Masa harina? Try Masienda. There are no excuses anymore for anyone in Southern California to buy bad tortillas. 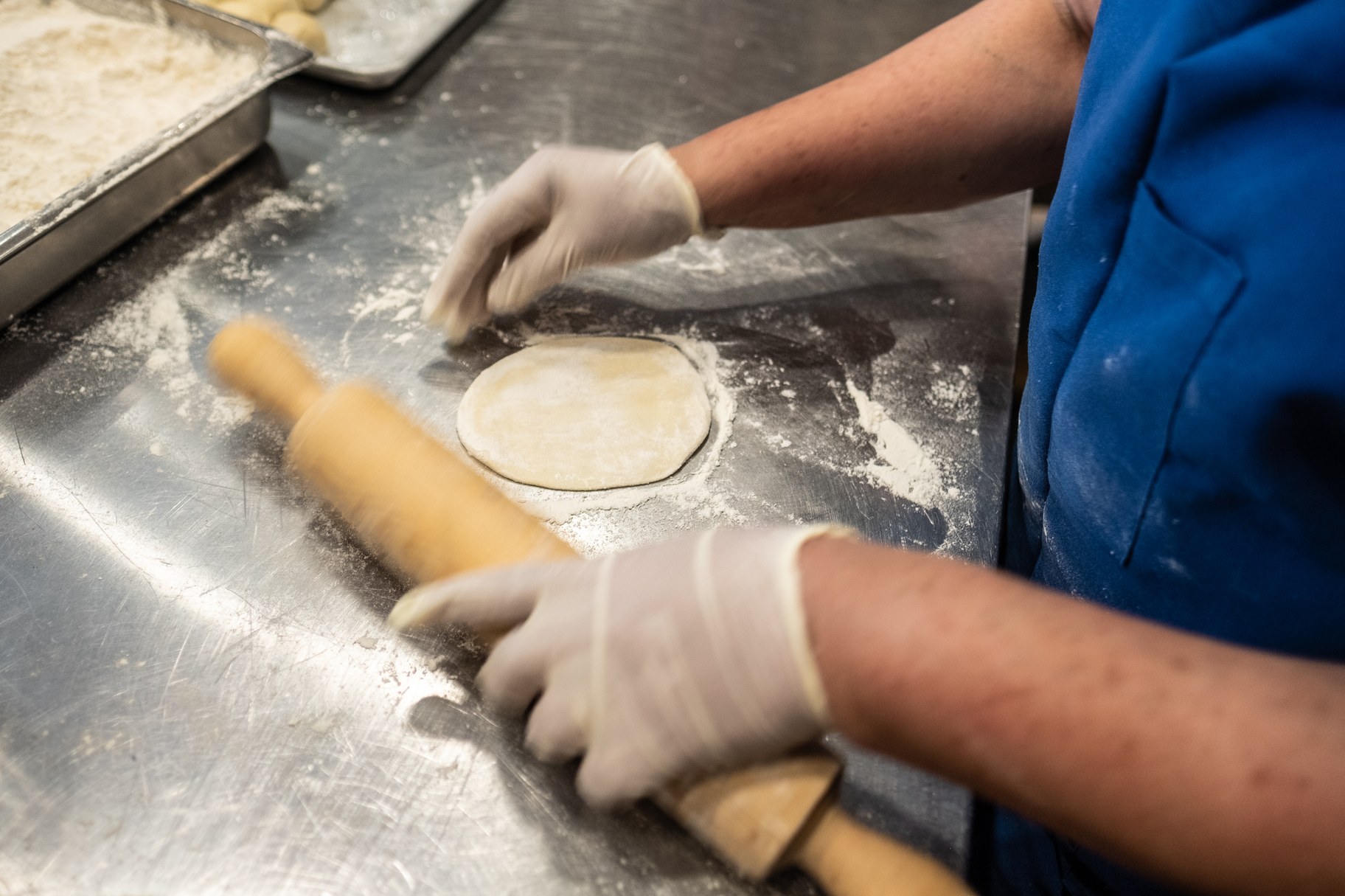 Hand-rolling a tortilla at HomeState. Photo by Amy Ta/KCRW

Evan: So true. We are blessed with an abundance of choice and talent. Miramar! I remember them from tasting corn tortillas the last two years. So good.

Gustavo: And yet they couldn’t pass the second round last year — competition in #TortillaTournament is RUTHLESS.

And then Evan sent Gustavo a TikTok video about making tortillas, and all was right with the world for a couple of hours...