Tortilla Tournament, Week 2: Shocking upsets on the road to the Suave 16! Now, we get to when it matters: The Suave 16. Our 8 corn and 8 flour tortilla finalists. Entry into this round guarantees participation in next year’s #TortillaTournament and has historically been dominated by the same group of restaurants and tortillas.

As you will soon see, shocking upsets have so far characterized the 2020 #TortillaTournament so far. Titans of the tortilla field are losing en masse to upstarts and Cal-Mex stalwarts. The below results will shock and anger many, but just know: We take our job seriously, so start to buy some of the Suave 16 finalists NOW.

#1 Taco Maria vs. #8 Tortilleria Playa Azul: From Connie Alvarez: “Taco Maria by a hair for missing a little bit of a saltier pop.” WINNER: Taco Maria.

#5 Tallulah’s vs. #13 Nuño Bros. “Tallulah's is blue corn, which automatically had me expecting the amazing flavor of the other blue corn tortillas in my batch, Taco Maria – but though no slouch, no dice either. This one goes to Nuño Bros for coming through with the yellow corny goodness.  WINNER: Nuño Bros.

#7 Taqueria Ventura Doña Raquel vs. #2 Carnitas El Rey: “Carnitas El Rey for almost tasting like carnitas and for having a two-tortillas-in-one, two-ply texture. I could pull one apart and double my taco take!” WINNER: Carnitas El Rey.

One matchup is an Orange County battle; the other has Oxnard facing San Bernardino, two Mexican-majority cities long stereotyped badly by Los Angeles. Hey, LA: you GONE from this bracket!

#1 Kernel of Truth vs. #8 La Jolla: Simply put, Kernel is straight-up Mama Pacha-Coatlicue-Mother Earth dominance. The corn flavor lasts, and there is no bitterness whatsoever. La Jolla had a good chew, nutty flavor at the beginning, but ended on a bitter aftertaste. WINNER: Kernel.

#6 El Ruso vs. #3 Lenchita’s: El Ruso’s corn tortillas, I must reiterate, are its secret weapon instead of its far more famous flour. They’re soft, with the slightest masa funk that all great corn tortillas have. Bright from the start, and the best corn tortillas are the ones that toast well, and this tastes like Corn Nuts if you leave it on the comal long enough.

As for Lenchita’s? Maybe the prettiest corn tortilla in the tournament: Gnarled, misshapen, looks like sangak up close. Charred flavor that remained even after I defrosted a pack. It’s a tortilla to eat on its own, not waste on a taco. BUT…there’s the slightest hint of bitterness at the end. Whether it came from preservatives or too much cal or because the cooks use evil Maseca, I have no idea. But it was there. And so the WINNER: El Ruso.

#7 La Favorita vs. #2 La Talpense: La Favorita doesn’t look like much, so it surprises with its depth. But La Talpense has a good, robust flavor that turns more complex the more you chew. WINNER: La Talpense

The first matchup will feature master against its devoted pupil to see who can do machine-made, organic corn tortillas the best; the second is an hecha a mano mano a mano battle. 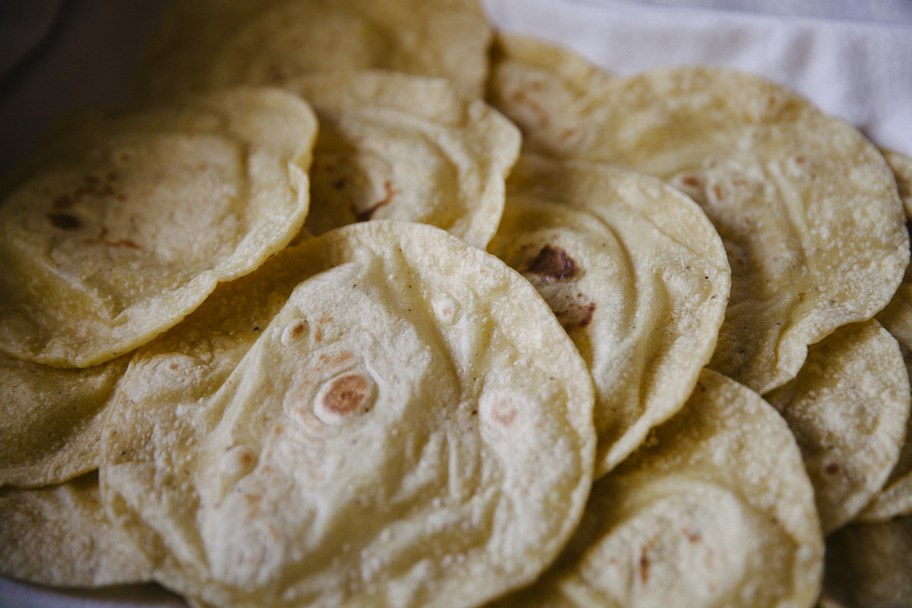 #1 HomeState vs. #8 Casablanca: Evan’s notes: “Both of these tortillas are delicious, but HomeState is more accessible to most people and Casablanca's don't keep beyond a couple of days.  Also that powdery signature of the HomeState flour tortilla is undeniable.” WINNER: HomeState

#5 Tallulah’s vs. #4 La Azteca: “I was surprised that Tallulah's beat out La Azteca as a quality everyday tortilla. La Azteca is a par-cooked tortilla so you're basically cooking it off yourself, which is fun. It puffs like crazy.  But the sheer flavor of Tallulah's won this match up. WINNER: Tallulah’s.

#10 Juanita’s Tortilleria vs #15 La Chapalita: I tasted these two over and over again to be sure. Juanita's is great, but La Chapalita is extra.  Probably extra fat, which gives it that flaky soft texture even when heating over direct gas flame. WINNER: La Chapalita

HomeState and Jimenez move on to their third Suave 16 in a row, joining corn kings Kernel of Truth and Taco Maria for the honor. Can newcomers Tallulah’s and La Chapalita (which is on a HELL of an underdog run) beat these flour giants?

#1 Burritos La Palma vs. #8 El Cholo: Per Mona: “Truly great tortillas. Both are outstanding, but El Cholo had something extra and special. With that amazing shortbread consistency, balanced seasoning (salt), really great structure, and it even smelled like fat.” WINNER: El Cholo.

#5 Tehachapi Grain Project vs. #13 Sol. “Sol is a solid tortilla. It's not overwhelmingly different, but I did love tasting it. But Tehachapi is unlike any other tortilla I've had before. It melted in my mouth, it tasted like a unique grain, was light, with a great finish.” WINNER: Tehachapi.

#6 Ama Cita vs. #14 Gonzalez: “While Gonzalez has good flavor, it was blown away by Ama Cita, with its butter, full of delicious flavor, and held together so well. It was just delicious, and I ate two.” WINNER: Ama Cita

#7 Ancho’s Southwest Grill vs. #2 Sonoratown: “The most challenging match! Sonoratown knows how to excel at flour tortillas. It's translucent, so deliciously fatty, can withstand heat, and is one of those tortillas you can eat right out of the bag. I heated it up, and the structure remained without little change. I love this tortilla. But Ancho's is so salty, thick and full of flavor. It has layers of flavor because it's so thick, almost pita-like. It's wonderful. WINNER: Ancho’s.

Damn, did anyone see THAT coming? Flour tortilla legends Burritos La Palma and Sonoratown both out in the second round — DAMN. Instead,  you have a newcomer to the flour tortilla game in Tehachapi, and a longstanding Riverside spot in Ancho’s blazing through the competition in their first-ever #TortillaTournament. Also, kudos to Tehachapi for being the first-ever contestant to place both their corn AND flour tortillas in the Suave 16. #TortillaTournament is STRONGER this year than ever, folks! 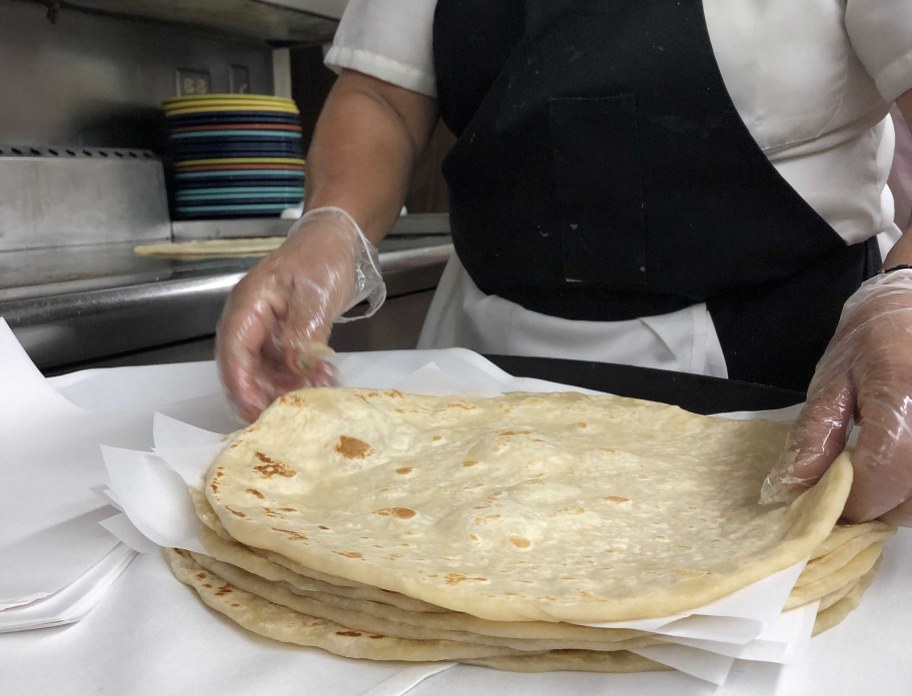 READ MORE:
Photos: How LA’s tortilla masters make magic with a handful of masa
Who is that girl on those Diana's tortilla packages? How Samuel Magaña's daughter became the queen of Gardena
Tortilla Tournament, Week 1: Stunning upsets, favorites on the run!
Inside El Cholo: How the old-school Mexican restaurant has thrived in LA for almost a century
What makes a good tortilla? Gustavo Arellano and Evan Kleiman on how to taste tortillas
How do you buy and eat tortillas in the time of coronavirus? Very carefully.
Love tortillas? Gustavo Arellano and Good Food’s Great Tortilla Tournament returns!
The Ultimate Tortilleria Guide of Los Angeles and Southern California