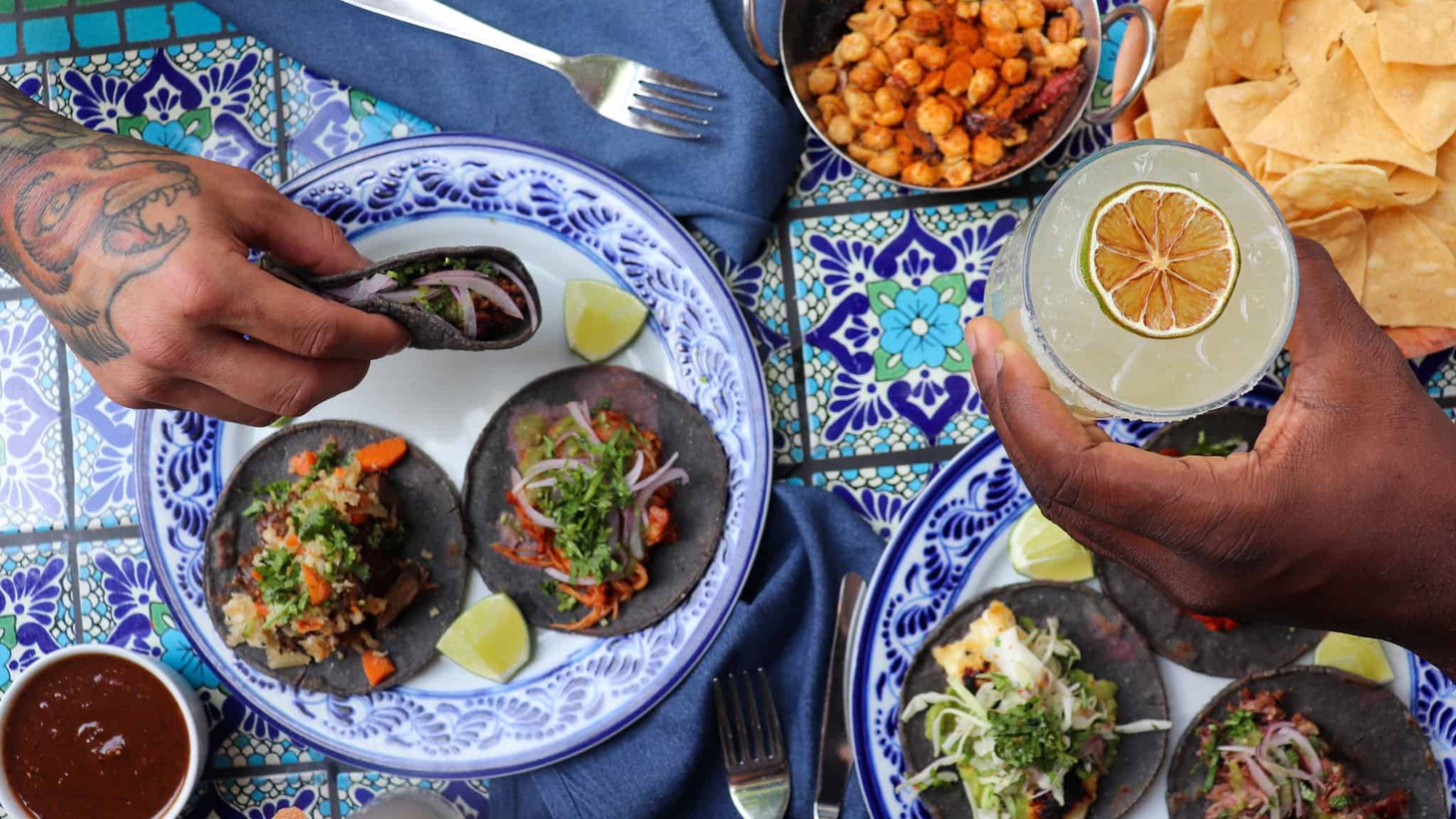 Tallula’s tortillas are hard to beat. Photo courtesy of Tallula’s.

Tournaments are simultaneously surprising yet predictable, especially one as large as this one. The first two rounds — when 64 tortillas go to 32 go to our Suave 16 — always have great upsets, and more than a few entries that make great runs. But by the time our 16 finalists line up, the tortilla titans tend to get serious and smash past their competition and into the ¡Eso 8! the way Hulk did to Loki.

That’s what happened in this year’s #TortillaTournament. Rack up the results, and don’t forget our grand finale Oct.16 is at Smorgasburg LA! 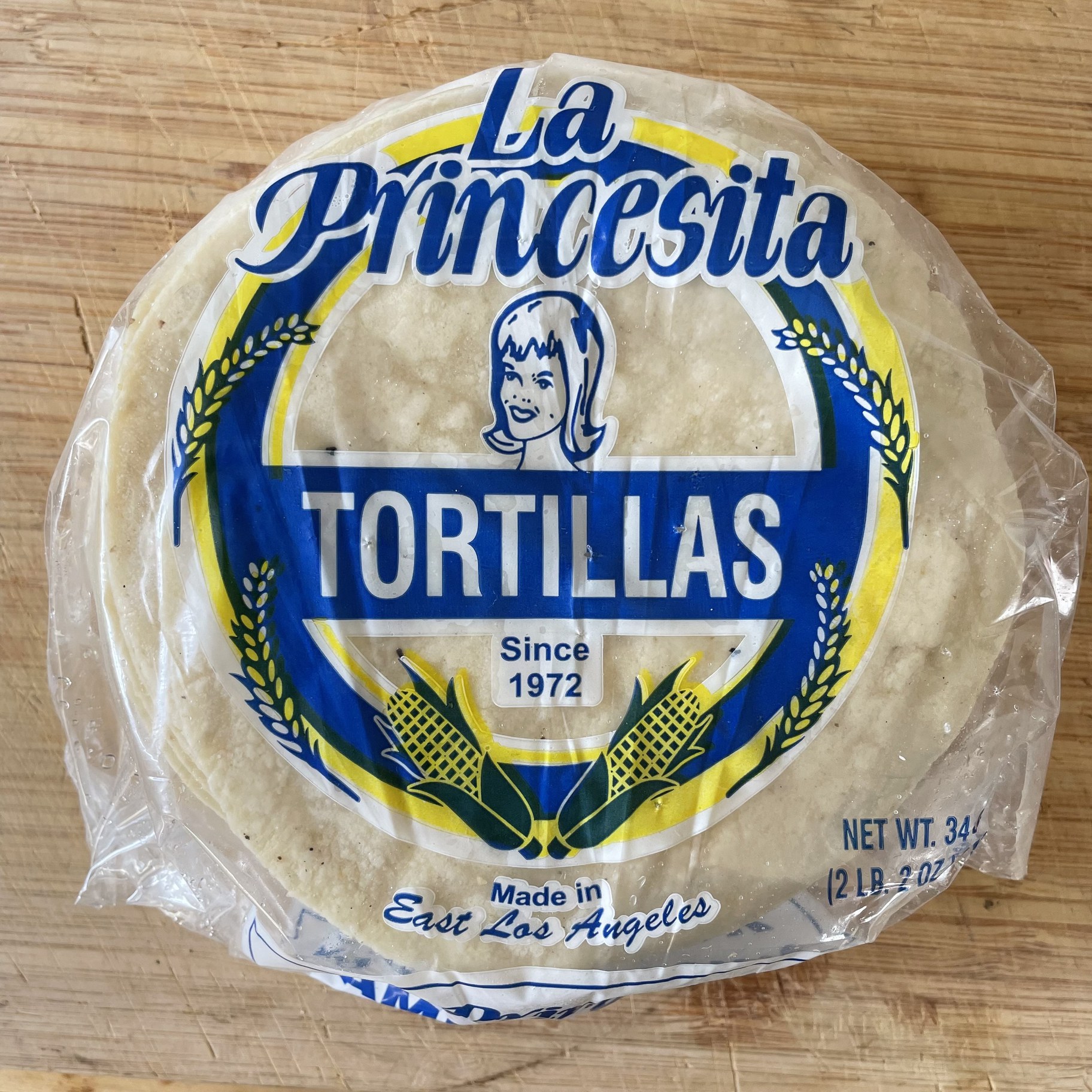 “Princesita has a simplicity and unfussiness to it,” says judge Mona Holmes. Photo courtesy of Gustavo Arellano.

#1 Taco Maria vs. #13 Maria's Tortillas: Taco Maria's is excellent. What can I say other than it's amazing and a consistently wonderful tortilla. It's almost unfair to compare it with Maria's, since it uses blue corn. Maria's is also a really great tortilla, the kind you hope is served at a restaurant. The tie-breaker came in when the husband made guacamole, and I made huevos divorciados for us to see who won. And it's Taco Maria.

Gustavo’s Takeaway: Two first-timers made great runs but just couldn’t top two long-timers, who just happen to be the #1 seeds in our first-ever #TortillaTournament, facing off at last! This is the second year in a row La Princesita has made it into the ¡Eso 8! Their reward? Four-time corn champion Taco Maria. Oy vey…or rather, ¡ay güey! 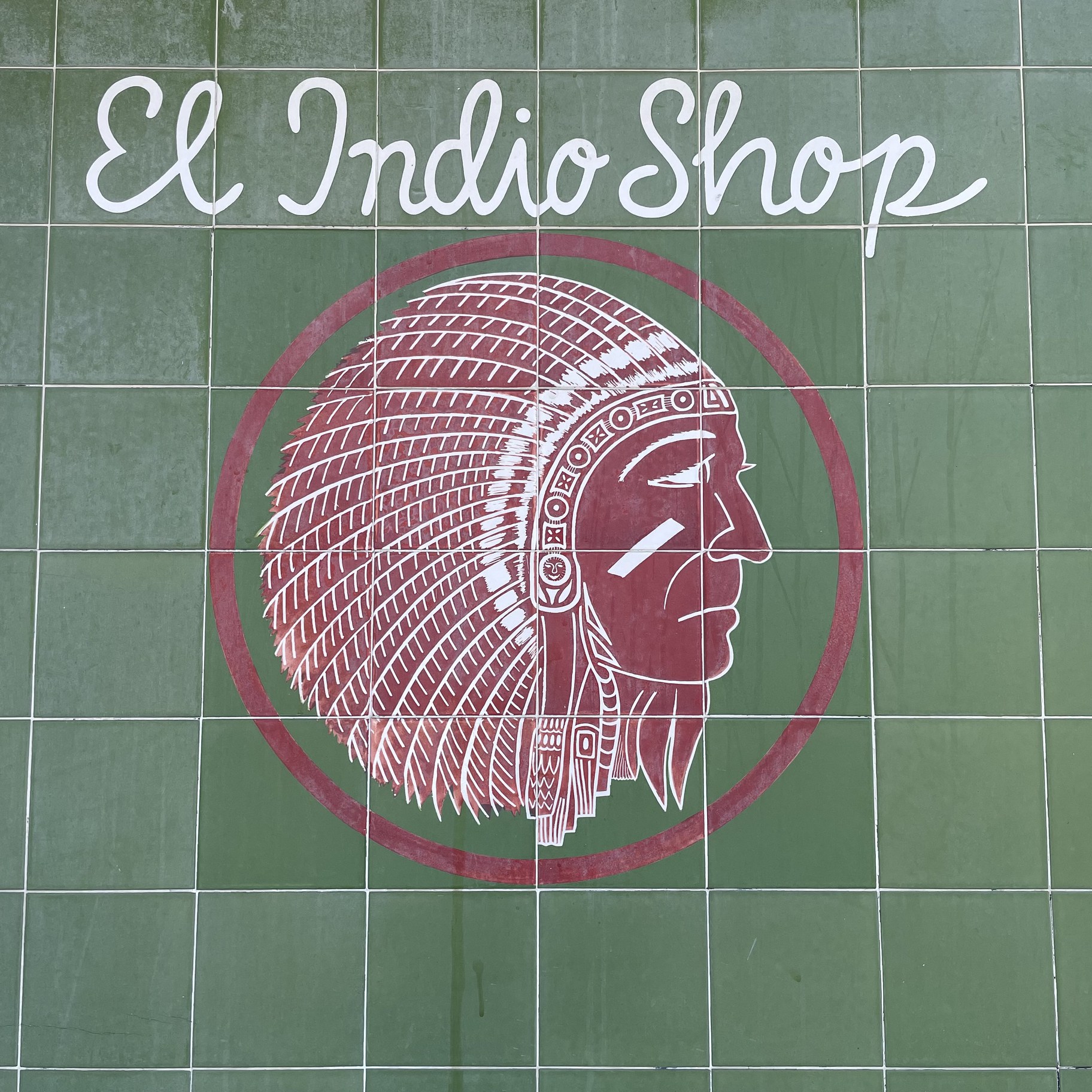 #1 Tallula’s vs. #5 El Indio: I really like both these tortillas. As I move through the judging process it's interesting to see which I chose for meals. El Indio was my most chosen workman tortilla. Tallula's gorgeous blue disk, which they interestingly cook on one side only, was a treat tortilla. Something special to eat on its own or with esquites, a pairing I find to be pretty perfect. As I've mentioned before, blue corn tortillas of this quality have a softer texture than either white or yellow corn tortillas, even those made from fresh masa in the gordita style. Because of its quality and deliciousness I'm giving this round to Tallula’s.

#3 Mitla Café vs. #10 Ruben's Bakery: The Mitla offering is a thick yellow corn tortilla made by hand while Ruben's is a white corn tortilla made on an automated line. While I appreciate Ruben's light sweetness and elastic texture, it can't compare to the deep satisfaction of eating Mitla's handmade option, which has a great mouthfeel. My only criticism of the Mitla tortilla is that it could use a little bit of salt.

Gustavo’s Takeaway: Talk about mirror images: Tallula’s is in Santa Monica and a high-end Mexican restaurant that makes blue corn tortillas; Mitla is in San Bernardino and and old-school Cal-Mex spot that makes yellow corn tortillas. This is the third year in a row Mtila has matched up against a blue entrant — will it show them what’s up, or curse Tobias Fünke yet again? 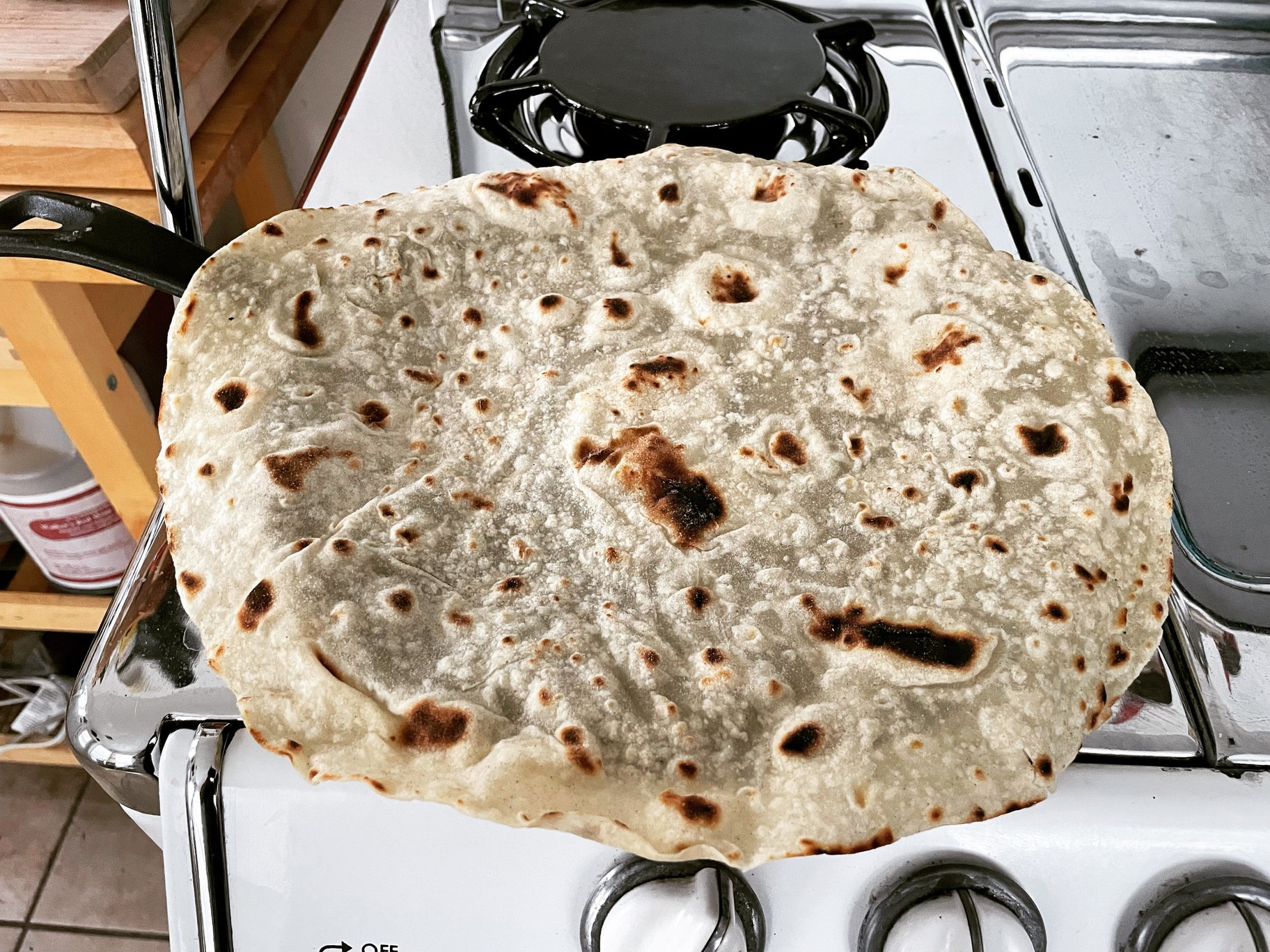 “El Burrito House upped their game in the Suave 16 — saltier this time, but still soft and powder and wonderful and beautiful,” says judge Gustavo Arellano. Photo courtesy of Gustavo Arellano.

#1 Ancho’s vs. #5 El Burrito House: Contradicting titans. The tiny Ancho’s tortilla comes from a massive Riverside restaurant. The large El Burrito House tortilla is from a tiny, newish spot in Bell – El Burrito House. But the batch that I got from Ancho’s was off — nowhere near the beauties I tasted in the first two rounds. El Burrito House, meanwhile, upped their game in the Suave 16 — saltier this time, but still soft and powder and wonderful and beautiful — look how it took over my comal!

#3 Bar Amá vs. #2 Sonoratown: These two matched up in the Suave 16 last year, with Sonoratown winning. This time, the former was buttery at the end the tiniest bit, but was also a tad chalkier this time. The latter started to sizzle the moment I placed it on my comal. Then came the small bubbles. I rolled it up to the size of a pencil, so pliable it was. Wheaty flavor with a tad bit of salt at the end — it’s the best I’ve ever tasted Sonoratown to be, and you’ll remember they were our first-ever Golden Tortilla winner.

Gustavo’s Takeaway: I can’t wait to show ustedes the photo of the two of these matched up — the contrasts will be immediately evident. Good job, El Burrito House, on making it into the ¡Eso 8! in your first year. But now you get to wrassle with a legend. 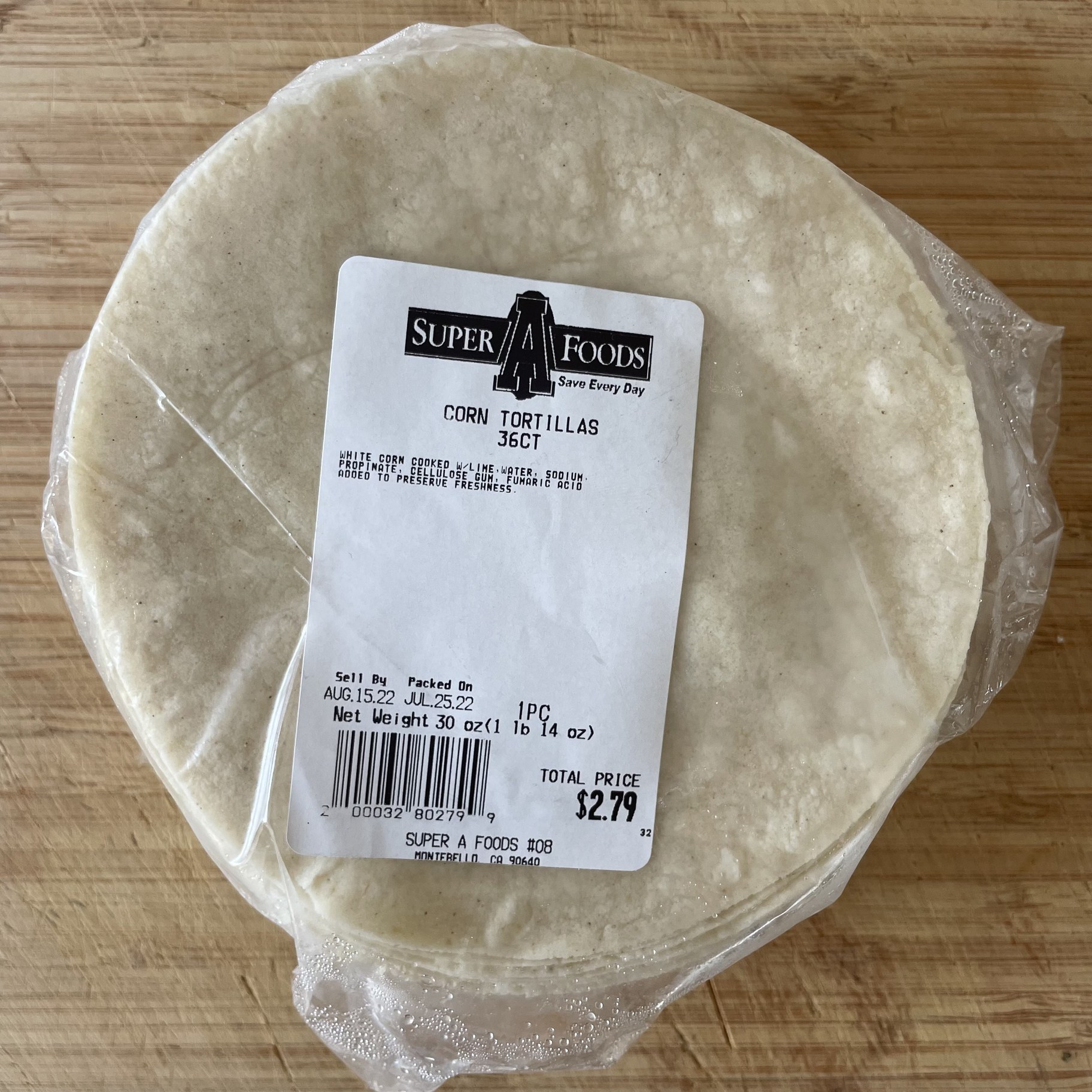 #3 El Ruso vs. #2 HomeState: Despite El Ruso’s unique lard flavor, this was no match for Homestate, which, as I’ve said before, COME ON!

Gustavo’s Takeaway: Two very interesting things in Connie’s bracket. HomeState is the only other contestant besides Taco Maria to make it into the ¡Eso 8! every year this #TortillaTournament has existed. They’re facing off against an old rival: Burritos La Palma. Each has one win and one loss against the other — here’s the rubber match!

As for the impressive Super A Foods run? I couldn’t figure it out — just look at the lackadaisical package art above (yes, I know it’s for corn tortillas, but it’s the same for flour — and the package art was so boring that I didn’t bother snapping a photo of the flour one). Then I finally read the ingredients on the package. Among them? Sugar. Damn!