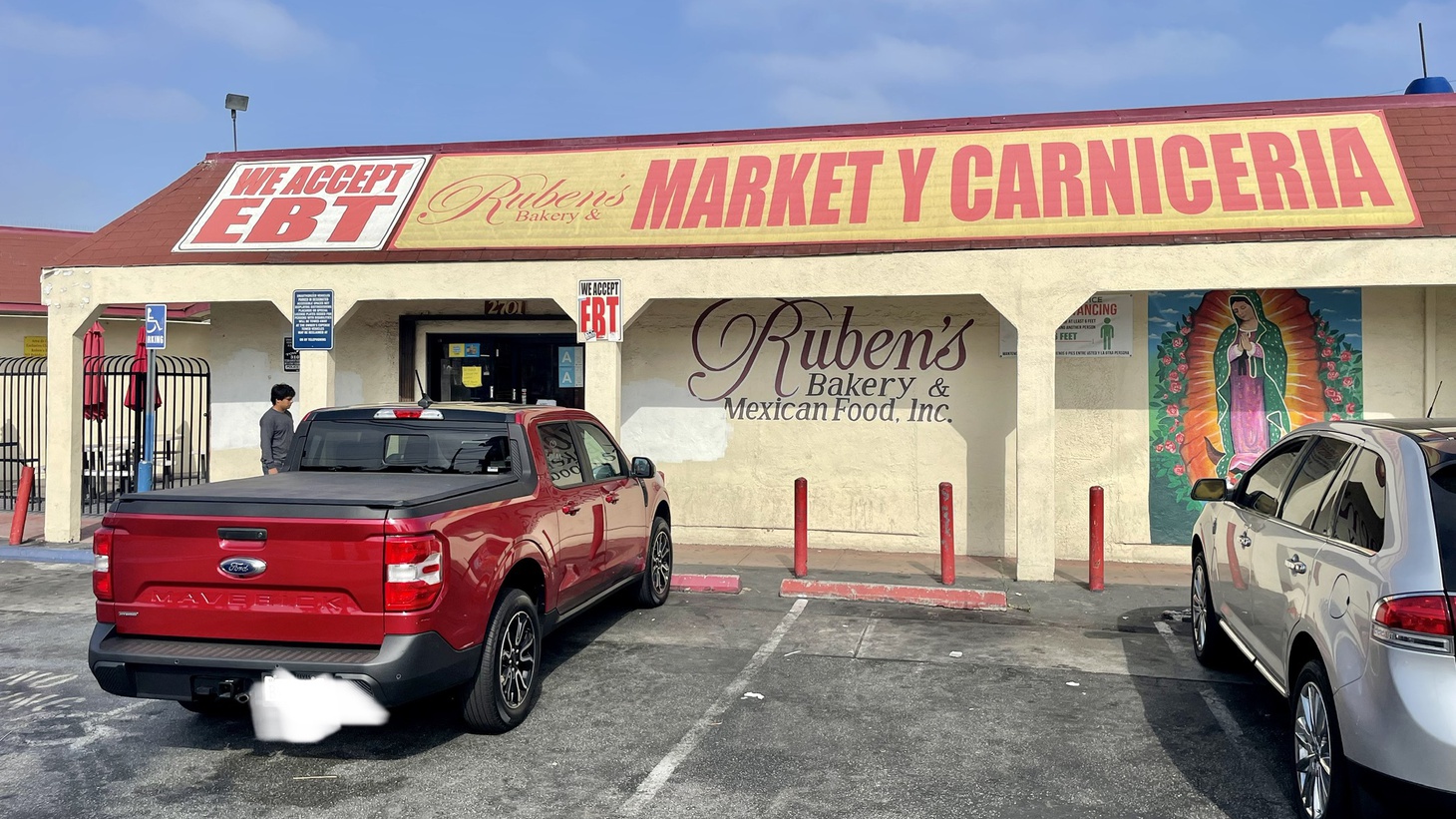 This year, there’s a big upset by Ruben’s Bakery, which becomes the first tortilleria from Compton’s underrated tortilla scene to make it into the Suave 16. Photo courtesy of Gustavo Arellano.

One of the best things about seeing the #TortillaTournament grow every year is to see areas that people outside of said areas don’t associate with tortilla culture — say, Oxnard, the Coachella Valley, Costa Mesa — beat the tried-and-true areas (East LA, San Fernando Valley, Santa Ana) and advance onward. This year, we have four history-making regions represented in the Suave 16. Who are they? Read on… 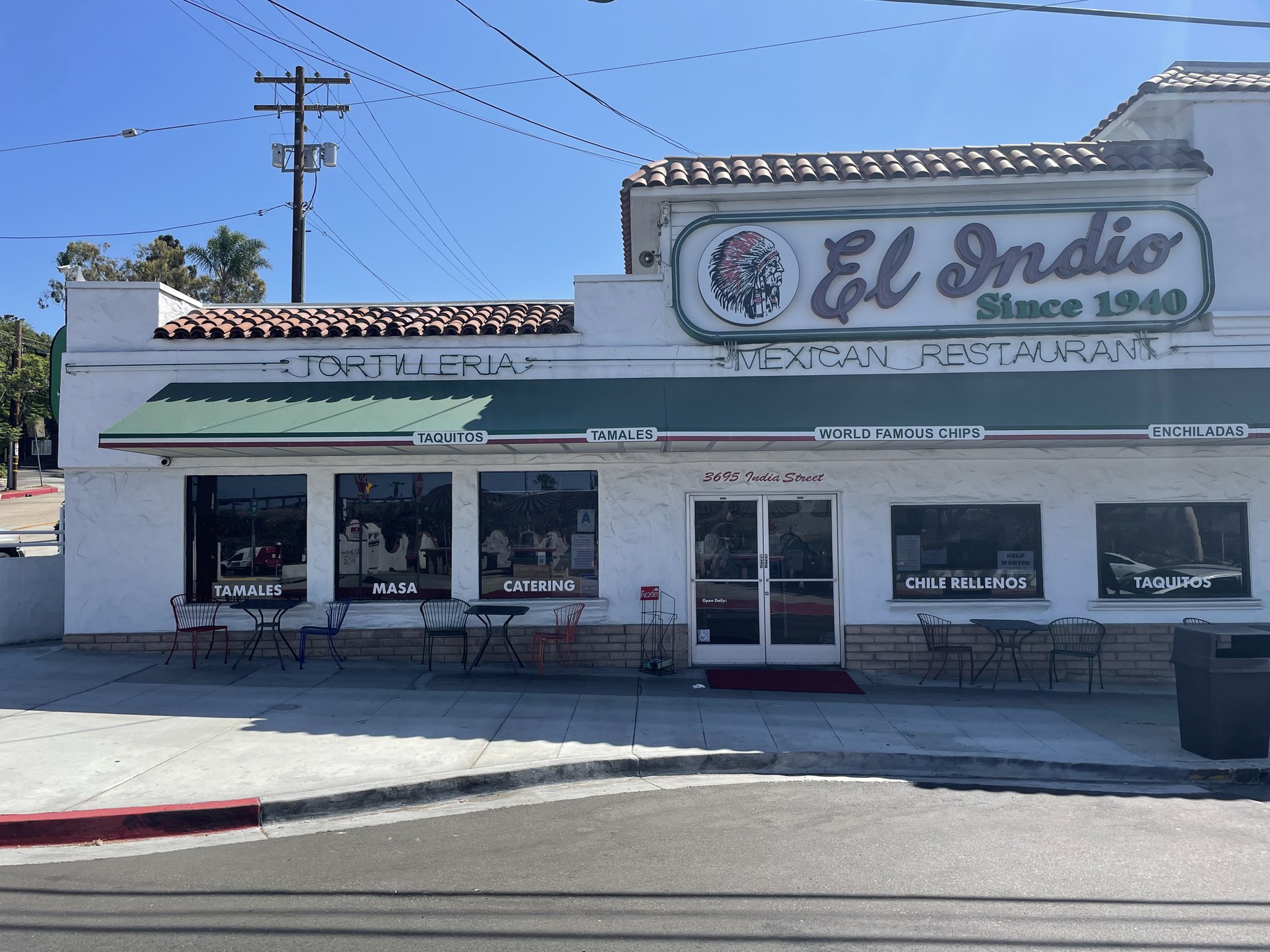 #1 Tallula’s vs #9 El Molino: Sometimes, I think tasting a blue corn tortilla against white or yellow isn't a fair fight because the blue is something completely different. One of my great pleasures of judging over the years is to check in with a tortillas' quality of the years. Tallulah's blue corn tortilla now is light years away from when the restaurant first opened. It was an easy win over El Molino. Usually, blue corn can be a bit mushy but this wasn't – just a good texture for scooping beans and a pronounced corn flavor with a bit of earthy sweetness. I would happily make quesadillas with El Molino but overall there's no contest.

#5 El Indio vs. #4 Amapola Deli & Market: Much like the match-up with Ruben's and TJ's, this is a workman white corn versus same quality yellow corn. Yellow nearly always wins on texture, and white once again wins here on taste.

#6 La Parrilla vs #3 Mitla Café: This matchup was the hardest of the bunch because they are so similar except in size. Both are yellow corn, with La Parilla being a smaller disc. Both have good texture with that great toothiness of a good corn tortilla. I'm giving it to Mitla for more flavor with an appealing sweetness.

#10 Ruben’s Bakery vs. #2 Trader Joe’s: Evenly matched. Either one is a fine daily go to. TJ's has it on texture, and Ruben's on taste so I'm going with Ruben's.

Gustavo’s takeaway: Big upset by Ruben’s Bakery, which becomes the first tortilleria from Compton’s underrated tortilla scene to make it into the Suave 16. And congrats to El Indio for representing San Diego, which also logs a first-ever Suave 16 appearance. The two underdogs get rewarded by facing off against corn tortilla giants Tallula’s and Mitla — YIKES!!! 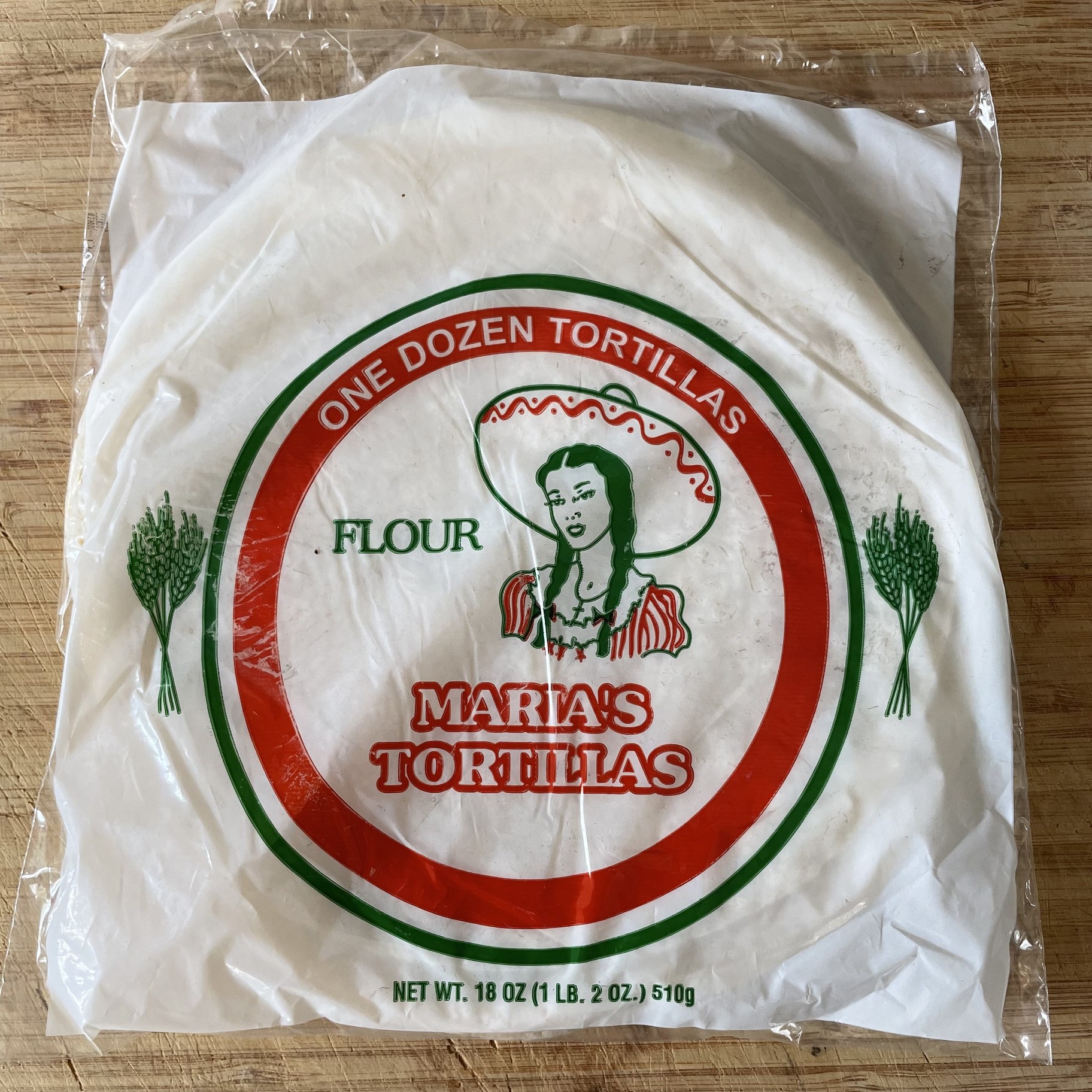 “Maria's has a slight nuttiness with the flavor, and a great consistency,” says judge Mona Holmes. Photo courtesy of Gustavo Arellano.

#1 Taco Maria versus #8 Ditroit: It's gotta be Taco Maria, I love this tortilla. Even though Ditroit is the type of tortilla that improves with every bite. And the first bite is formidable! But Taco Maria has something special — it's just full of the best kind of flavors and so unexpected. Taco Maria barely pushes out Ditroit.

#5 La Canasta vs. #13 Maria's Tortillas: Another great match up. Canasta's got a good bite, firm with a good finish, the right amount of salt. Like it! Maria's has a slight nuttiness with the flavor, and a great consistency. So what do we do? We give it to the one that's unique and stands out most.

#6 Tortilleria Lily's versus #14 Rancho Grande Markets: When it came down to a side-by-side comparison, Rancho Grande beat Lily's because of the consistency. Lily's tasted delicious, just like Rancho Grande, but the latter had better taste and won this round.

#7 Crazy Coyote Tacos versus #2 La Princesita: La Princesita makes a good tortilla!! I could taste the sweetness of the corn. I found Coyote to need salt.

Gustavo’s takeaways: The Coachella Valley gets its first appearance in the Suave 16, although Rancho Grande wasn’t the choice I’d think would punch its way in! And it’s going to be a battle of the Marias in the other matchup, so we gotta ask: What’s going to be the theme song for this: “Maria Bonita,” by Agustín Lara, “Take a Letter Maria,” by R.B. Greaves, or the theme song to the long-ago telenovela Simplemente Maria? 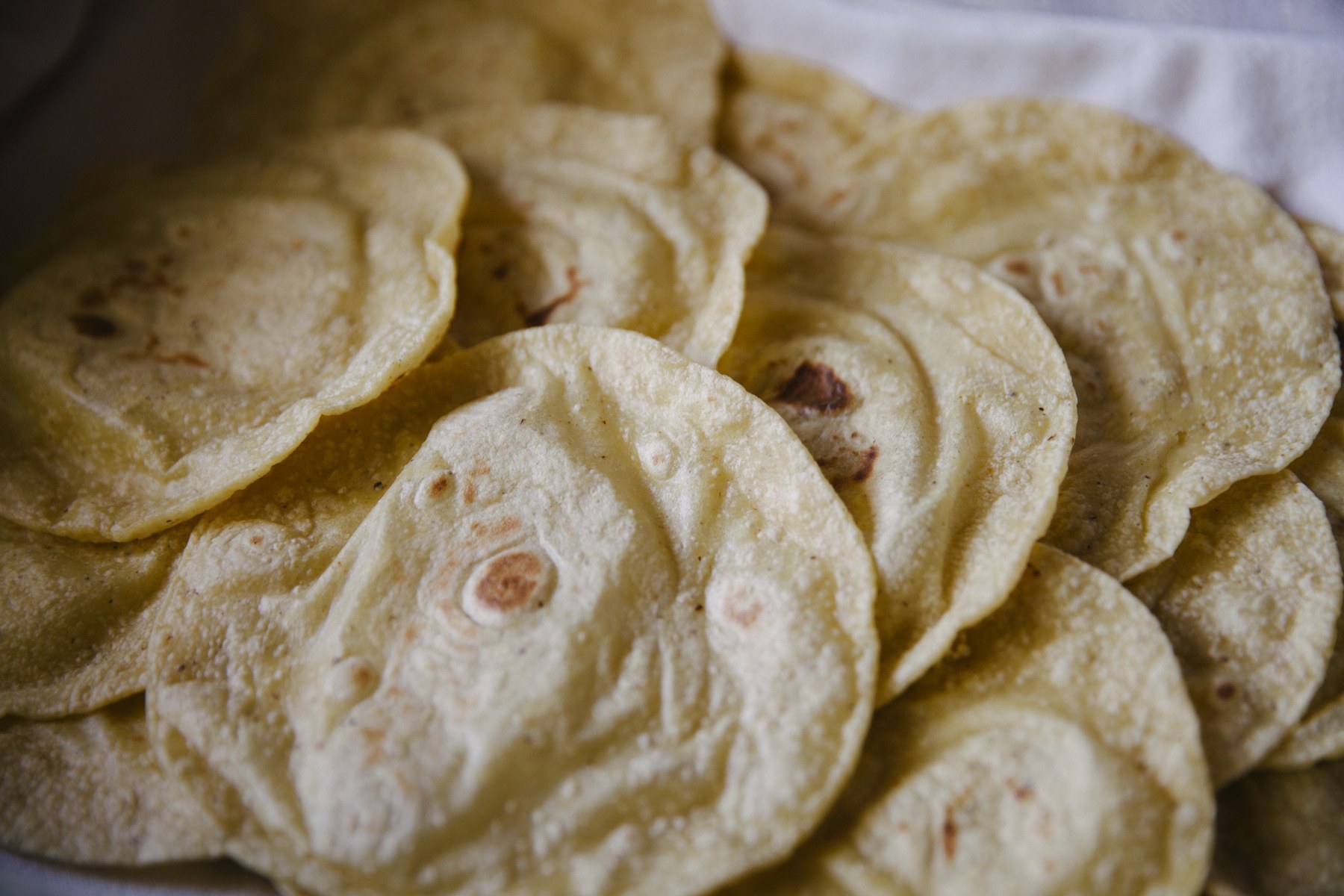 #1 Ancho’s vs. #8 Masa Catalina: The latter is a good flour tortilla, would be perfect for quesadillas. I like its slight saltiness, and it gets better as you eat it more. But Ancho’s impresses from the start, and inches it out every step of the way. Small can sometimes win, you know?

#4 Graciana’s Tortilla Factory vs. #5 El Burrito House: Graciana’s is great, but it’s still machine made. It just can’t compete with a handmade tortilla like Burrito House.

#3 Bar Amá vs. #6 Old Town Mexican Cafe: Good first run for San Diego—y’all belong, and ustedes each made it into the second round. But Tex Mex via LA wins basically always.

#7 Mírame vs. #2 Sonoratown: Sonora flour versus Sonora flour for Sonora supremacy in the Southland — all that’s missing is the bavcanora! Mirame toasts faster, Sonoratown stays wondrously soft. Mirame makes a very good flour tortilla, and proof that the quality of the flour goes a long way. But they’re going up against a former champion. Mírame could’ve easily been a Suave 16 any other year, against any other competitor — but they just couldn’t make it past Sonoratown.

Gustavo’s takeaway: I’m the most boring bracket so far — no real upsets, as titans roll. But kudos to El Burrito House, for making it into the Suave 16 in its first year. Their reward: Going up against a tiny yet mighty Fuerte Four finalist. Never said the #TortillaTournaent was going to be easy! 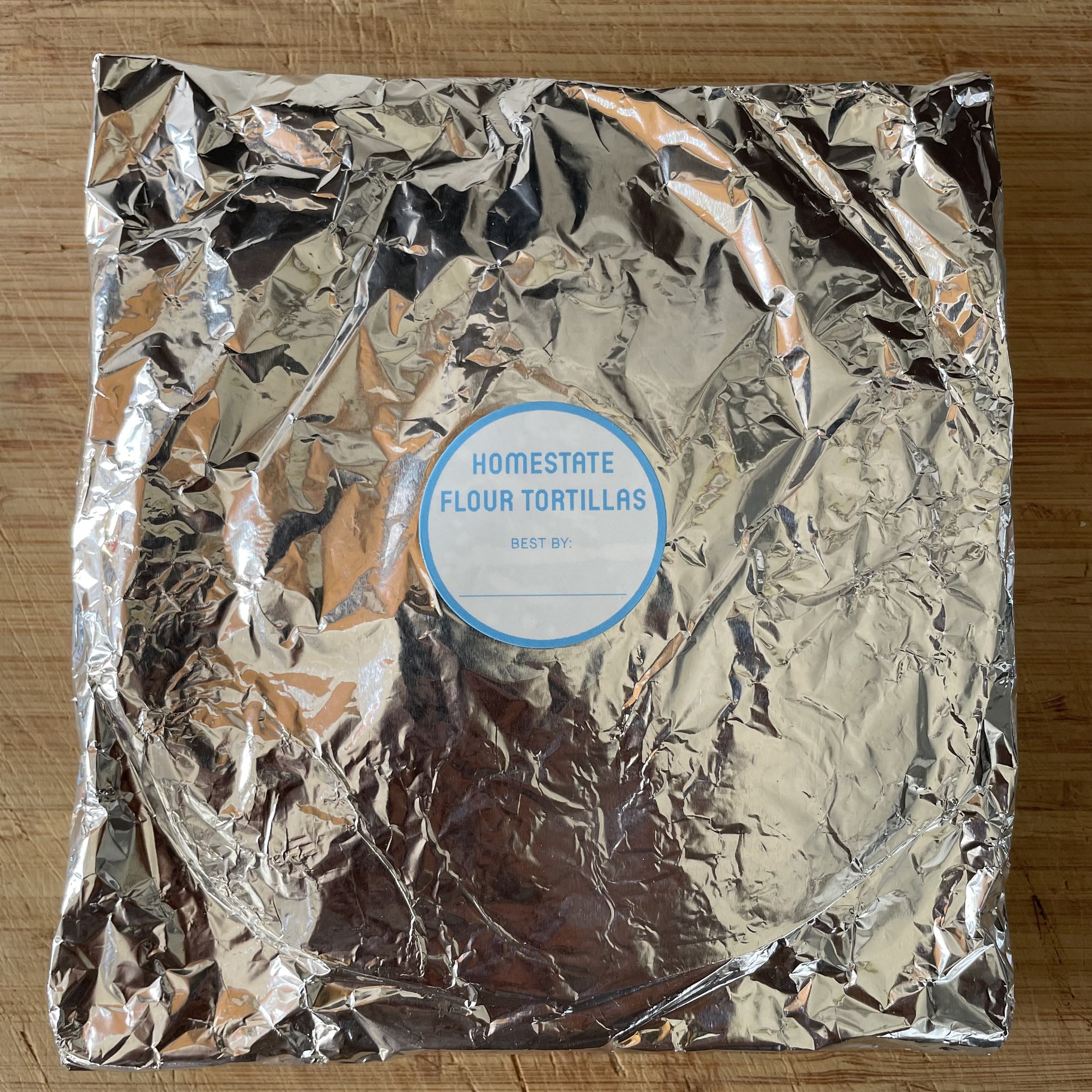 No. 5 Manolo’s Farmer Market vs. No. 13 Super A Foods: Both tortillas sizzled beautifully on the comal and the match was close –– I tried them hot, burnt, cold, raw, and even went into penalty bites! But the win goes to Super A.

No. 11 El Torito Grill vs. No. 3 El Ruso: El Torito Grill tortilla almost over took its opponent. I wasn’t in love with El Ruso this time like other years, but its flavor staved off the little bull.

No. 10 Poquito Más vs. No. 2 HomeState: Poquito Más’ tortilla is small, and light, and pleasant and a good little soldier for going up against a GIANT and not being a total throwaway. But HomeState? Um...COME ON!

Gustavo’s takeaway: After a Week 1 of nothing but upsets, Connie returns to something more expected save Super A Foods, which becomes the first supermarket to get into the Suave 16. What’s their secret? Tune in next week to find out!