One place he did not expect to work is China. His 1997 film Seven Years in Tibet, filmed mostly in Argentina, upset the Chinese government. The film was banned in China and both Annaud and star Brad Pitt were barred from entering the country.

No one then, was more surprised than Annaud to get a visit from Chinese producers in 2007 asking him to make a very Chinese movie.

They wanted Annaud to adapt the bestseller Wolf Totem, a semi-autobiographical novel written under the pseudonym Jiang Rong. The book follows a student from Beijing sent to live in Inner Mongolia during the 1967 Cultural Revolution. The novel is critical of Mao’s communist regime, especially the damage caused by urban settlers who upset the delicate balance in the region between humans and wolves.

The movie version would of course involve working with wolves, and Annaud had made movies with animals before. He had read the book and was up for the challenge but still, as he told us when he joined us in the studio, he wondered...had the Chinese really gotten over their very negative reaction to Seven Years in Tibet?

They promised they had. Annaud says Chinese producers are pragmatic people, and saw him as a person they knew could get the job done. He could also provide something of a neutral voice for working with very sensitive material.

Annaud is an immersive director, and ended up moving to China for several years, spending 165 days shooting in Inner Mongolia and then post-production in Beijing. And before they could even start shooting, they had to raise their own wolf pack. 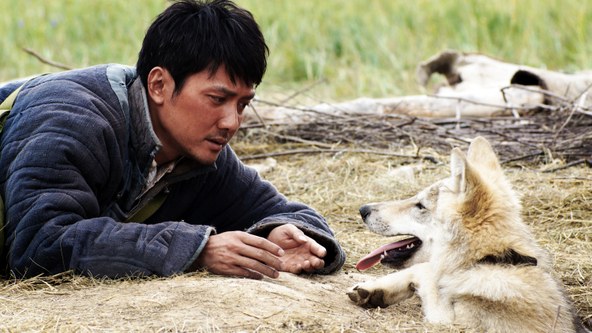 Annaud wanted to use real native wolves -- who don’t take direction too well -- so the production had to raise and train animals especially for the project. These are intimidating creatures, though they look quite different from the gray wolves of North America. Annaud says Mongolian wolves are the color of lions and they have the eyes of tigers. He bonded with the alpha male of the pack, but took extreme caution, as he knew that wolves can never truly be tame.

Wolf Totem was a hit in China -- it’s one of the top-ten films at the Chinese box office this year. It’s also China’s Oscar submission for best foreign-language film. Now, Wolf Totem opens in the US, where Annaud is happy to present American audiences with another option besides the typical Hollywood fare.

China Has a Change of Heart on Filmmaker Jean-Jacques Annaud