In the new movie Whiplash, Miles Teller plays drummer Andrew Nieman, a first-year student at an elite music conservatory , and J.K. Simmons transforms himself into the terrifying, abusive teacher, Fletcher.

Director Damien Chazelle, is a drummer himself, and drew on his experiences in high school, where he played in a jazz band and had a frightening teacher. When Chazelle sat down with Kim Masters, he said his own teacher was nowhere near as scary as the one Simmons portrays in the film, but the sense of dread Chazelle felt going into rehearsal every day was something he wanted to unpack in the movie.

Chazelle first started working in Hollywood as a writer, often doing rewrites of horror scripts while working other odd jobs to pay the bills. He was able to drop the side jobs and focus solely on writing after he sold a spec script he said he wrote purely with the intent to be commercially viable. That script hasn’t been made into a movie, but another one of Chazelle’s projects has. Whiplash was a hit at Sundance this year, but the film actually made its first Sundance appearance in 2013, albeit in the form of a short.

The hope was that making a 15-minute short film first would help Chazelle get the funding he needed to make a full-length feature, and that’s exactly how it worked out. Chazelle said the process of making the short was actually helpful, sort of like a rehearsal for the feature, which ended up being a very intense, all-consuming film shoot. But he’s looking forward to longer having to audition his own films as shorts first. Chazelle’s next feature-length movie, La La Land, will have him working with Miles Teller again, no short required this time. 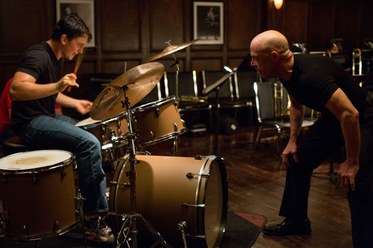 In the new movie Whiplash , Miles Teller plays drummer Andrew Nieman, a first-year student at an elite music conservatory , and J.K. Simmons transforms himself into the...

How Jewish émigrés Impacted the Birth of Film Noir

In the 1930s, as the National Socialist Party gained power in Germany, people around the world did what they could to help Jews escape the Nazi threat. Jewish filmmakers and...