In the 1990's, David Crane and Jeffrey Klarik hit the TV jackpot. Crane co-created Friends and Klarik co-produced Mad About You.

The two are partners -- in life and in writing -- and have mined their years of experience in television to create the Showtime comedy Episodes, a satire of Hollywood with Matt LeBlanc playing a version of himself, still trying to live down the legacy of Joey from Friends.

In Episodes, a co-production with the BBC, married British writing team Sean and Beverly, played by Stephen Mangan and Tamsin Greig, are asked to make an American version of their acclaimed TV comedy. Soon after landing in LA, they find that everything they love about their show is being transformed beyond recognition thanks to changes wrought by disingenuous network executives.

Ironically, because of the very limited production budget, the show is mostly shot in London, where Crane and Klarik have devised all sorts of tricks to make England look like California.

Despite critical acclaim, Emmy nominations and a renewal for a fifth season, the show has flown largely under the radar -- produced on shoestring budget and still awaiting that breakout moment. Crane and Klarik think this is partially because there's so much good content out there, but they're also not shy about saying they think Showtime could give them better placement and more money. Because the success of their earlier shows means they never have to work again, they've got no fear of burning bridges. 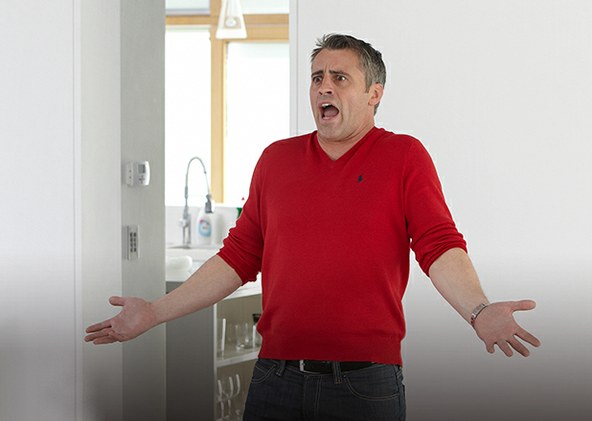 When ballots went out for Emmy nominations this year, Crane and Klarik decided to take their awards campaign into their own hands, running a hand-written, full-page ad in the Hollywood Reporter, reminding voters about their show. Their DIY approach worked, and the show got nominated again, both for Matt LeBlanc's performance and for Crane and Klarik for comedy writing.

In the 1990's, David Crane and Jeffrey Klarik hit the TV jackpot. Crane co-created Friends and Klarik co-produced Mad About You.