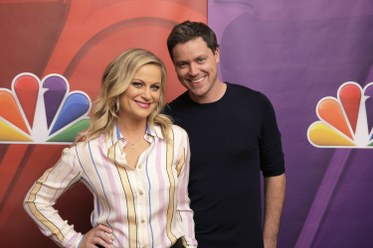 NBC’s Welcome to Sweden is something of an unlikely comedy. The summer series features big Swedish stars like Lena Olin and uses subtitles.

Kim Masters talks to the show’s creator Greg Poehler, who is also its star. His older sister Amy is an executive producer on the series.

Growing up, Greg Poehler watched his sister toiling as she tried to break into show business. He went a more conservative route — to law school. Then he fell in love and moved to Sweden, an adventure is the premise of his show.

Poehler plays a former celebrity accountant whose old clients keep popping up and disrupting his new life plans. Among them? Aubrey Plaza, Will Ferrell and, yes, Amy Poehler.

NBC’s Welcome to Sweden is something of an unlikely comedy.  The summer series features big Swedish stars like Lena Olin and uses subtitles.

The Motion Picture Association of American doesn’t like to reveal much about the workings of the ratings board that assigns those PG-13’s and R’s and sometimes the dreaded...