John Horn visits with the twin filmmaking brothers Logan and Noah Miller as they rush to finish the final mix of their film Sweetwater in time for its premiere at the Sundance Film Festival. With the festival around the corner filmmakers all over are forgoing sleep and sanity to get their films read for Park City. 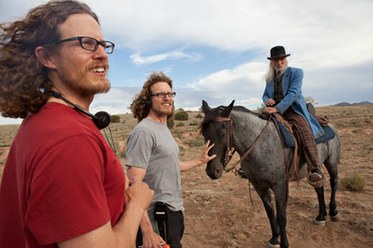 Logan Miller, Noah Miller with Ed Harris (on horseback) on the set of Sweetwater
Courtesy the Millers

Elizabeth Gabler, President of the division of the Fox Film Studio known as Fox 2000 talks about the challenging road to making Life of Pi. She insisted the book by Yann...

John Horn visits with the twin filmmaking brothers Logan and Noah Miller as they rush to finish the final mix of their film Sweetwater in time for its premiere at the...