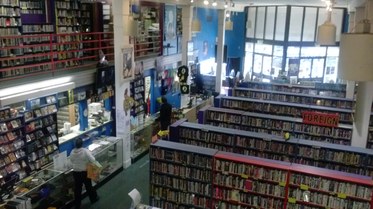 Scarecrow Video in Seattle is something of an institution. They’ve got more than 120,000 movies in formats like VHS, laserdisc, DVD, Blue-ray and more. And among those movies are some rare, hard to find titles like Disney’s Song of the South and the Beatles Let It Be on VHS.

Kate Barr, an outreach coordinator for the store, says that despite its wealth of material, Scarecrow Video has suffered the same woes as other video stores across the country. A plea to customers for help brought in some donations last fall, but not enough to keep the store in the black. Now Scarecrow has launched a Kickstarter campaign in hopes of becoming a nonprofit called the Scarecrow Project.

Unlike film archives at places like universities, which focus on preservation, Scarecrow Video wants people to take these rare movies home to watch. In the age of Netflix and VOD, Barr thinks there’s still good reason to go to a physical video store. Especially since Scarecrow has about 10 times as many titles as you can find online.

Neal Baer has been a writer and producer enjoying outsized success over decades on shows such as ER, Law & Order: SVU and the CBS series Under the Dome.

Scarecrow Video in Seattle is something of an institution. They’ve got more than 120,000 movies in formats like VHS, laserdisc, DVD, Blue-ray and more. And among those...