Tab Hunter a superstar of the 1950's. Blond and stunningly handsome, Hunter's nickname was "The Sigh Guy." One of the last actors who was under contract to a studio, he was a top star for Warner Brothers until 1959. He was also a singer whose single, "Young Love," was number one on the Billboard Hot 100 chart for six weeks in 1957.

Hunter made teenage girls across the country swoon. He went on dates with beautiful Hollywood women, sometimes at the urging of the studio. Publicly, he'd frequently be spotted with Natalie Wood. But the two were just good friends. Hunter is gay.

In 2005, Hunter told his life story in the book Tab Hunter Confidential. Now, director Jeffrey Schwarz had adapted the memoir into a documentary of the same name. Hunter's long time partner Allan Glaser produced the film, and spent years acquiring much of the Tab Hunter memorabilia seen in the movie.

When we spoke to Hunter and Schwarz, Hunter told us as he was coming of age in Hollywood, no one talked about the fact that he was gay. In fact, the word "gay" was hardly ever even mentioned.

When Hunter was just a teenager, he was arrested at a party for gathering with other gay men and women. Years later, Confidential magazine ran a story about the now famous Tab Hunter being arrested at a "limp-wristed pajama party." But Hunter was such a famous hunk, and all the other magazines were running stories about him going on dates with women that the Confidential story did very little damage.

But his career wasn't bullet-proof. One of the last actors under contract to a studio, Hunter ended up buying his way out of his deal at Warner Brothers in 1959 because the studio wasn't offering him the challenging roles he wanted. Without studio support, his career took a nosedive. He paid the bills by becoming a pioneer of dinner theater, where the stress of nightly performances led to a heart attack.

In 1981, Hunter's on-screen career had a revival with the John Waters film Polyester. Now, instead of playing the leading man opposite hollywood starlets, his on-screen love interest was the larger than life drag queen, Divine. 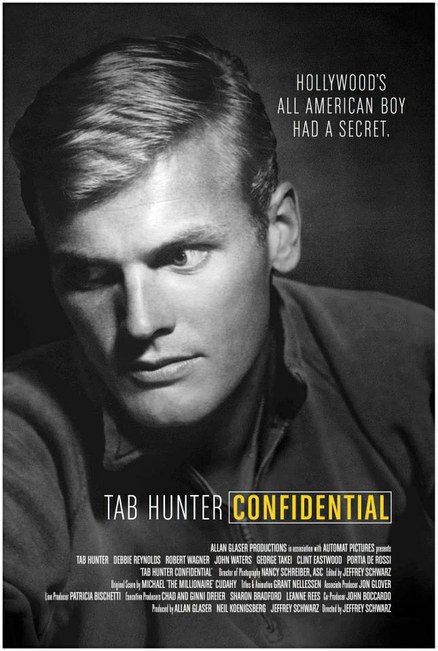 In fact, it was a mutual appreciation for Divine that first connected Hunter and Schwarz. The director met Hunter when working on an earlier documentary called I Am Divine. Schwarz, Hunter, and Glaser all hit it off, and when the time came for Hunter to do his own documentary, he and Glaser knew Schwarz was the person they wanted to direct.

Tab Hunter Returns to Film, This Time with His Own Story

Tab Hunter a superstar of the 1950's. Blond and stunningly handsome, Hunter's nickname was "The Sigh Guy." One of the last actors who was under contract to a studio, he was...