The sacred tenet for almost any daytime television network exec is simple: maintain the status quo, and do what has worked countless times over and over again. Produce, rinse, repeat. You could say it worked...until it didn't, when we went from nearly 20 soap operas in 1970 to only five today.

Enter the unique development process, social mission and distribution approach behind the soap-inclined, award-winning breakout hit drama series East Los High. The show is shaking up all kinds of traditions from daytime television's nostalgic past -- and not just with their moves on the fictional East Los High School dance floor -- from where and when audiences tune in, to how and why, leveraging deep academic research in fandom and active partnerships with nonprofit organizations to create a fully immersive, entertaining and educational fan experience.

Katie Elmore Mota and Mauricio Mota, executive producers of East Los High and founders of the socially conscious production company Wise Entertainment, became obsessed with seeking out the gaps in entertainment that weren't addressing the social tensions of what's happening right now, especially with the audiences in America whose stories are all-too-often left untouched by most mainstream media.

The result has been nothing less than extraordinary. Nominated for three Daytime Emmys this year, the highly anticipated third season of East Los High just launched on July 15 on Hulu's popular streaming subscription service, where the show's devout fans can choose to instantly "binge" watch entire seasons, or savor each episode one at a time. 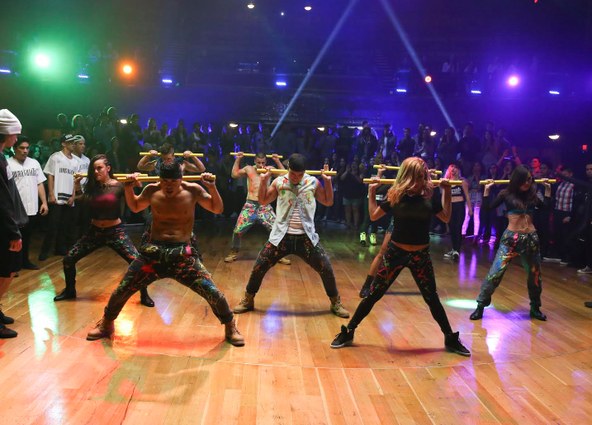 At East Los High there's lots of drama and lots of dancing,
but the show was created with a social mission in mind.
Photo courtesy of Hulu

East Los High is the first English-language show with an all-Latino cast, creators, and writers, and the fan response to the show's authentic voice proves this innovative approach has real legs, even in a sometimes-stuck-in-the-past genre. Fans generate viral hashtags on social media like "#thisishowIgrewup" in response to story lines they connect with (such as Ceci's domestic abuse story), and will come together for watch parties, chats with the cast, or offline discussions about story lines.

"We're so excited about Season 3," Katie Elmore Mota told us. "The show is really coming into its own this season: the story lines, the love triangles, the dance. It's beautiful, it's dramatic, it's real, it's grounded, it's gritty."

Kristin Marguerite Doidge is a freelance journalist based in Los Angeles, and a recent graduate of the master's in specialized journalism program at USC's Annenberg School. She reports on popular culture, the arts, and social justice -- on the air and on the web -- as a contributor for Marie Claire, Youth Today, Caring Magazine, NeonTommy.com, and KCRW's UnFictional.

It's not uncommon to hear someone say they're "addicted to the Internet." In China, internet addiction is actually classified as a clinical disorder.

By Kristin Marguerite Doidge The sacred tenet for almost any daytime television network exec is simple: maintain the status quo, and do what has worked countless times...