Today, a special for the beginning of the holiday season…. a compilation of family stories from the first year of this program.

In the first story, storyteller David Ellis Dickerson talks about his mission of mercy to save his Evangelical Christian  family from themselves. It does not go as planned.

He has a book called House of Cards: The True Story of How a 26-Year-Old Fundamentalist Virgin Learned about Life, Love, and Sex by Writing Greeting Cards.

Next, actor Laura Silverman has two stories about her father. First, he follows some very bad marriage advice. Then he runs for a seat on the homeowners' association of his Florida retirement community.

Laura Silverman is an actor and writer. You may remember her from The Sarah Silverman Program, and The Comeback, among a lot of other things. 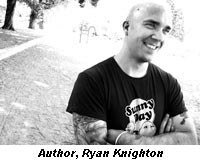 Finally, a story about a new father taking his four-month-old baby girl for a walk through city streets, which shouldn't be too difficult unless, like author Ryan Knighton, this new dad happens to be blind. First Steps was produced by Jonathan Goldstein and Mira Burt-Wintonick with Cristal Duhaime, and is adapted from an essay by Knighton, from his book C'mon Papa: Dispatches from a Dad in the Dark.

The story first aired on CBC's Wiretap, which is distributed in the US by PRI, Public Radio International.

To hear many more episodes of Wiretap, subscribe to the podcast at iTunes.